Over the course of its thirteen-year history, Bestival has cemented its place as a trailblazer of the English boutique festival scene. It has a reputation for the veracity of its lineup choices, with the likes of Beastie Boys, Stevie Wonder and Elton John playing over the years,
but its regulars know that it’s so much more than that: namely, a carnival of love and misbehaviour where you can easily immerse yourself in non-musical activities for four glorious days and nights.

Here, we run down all the things we’re excited about this year, with not a band or DJ amongst them… 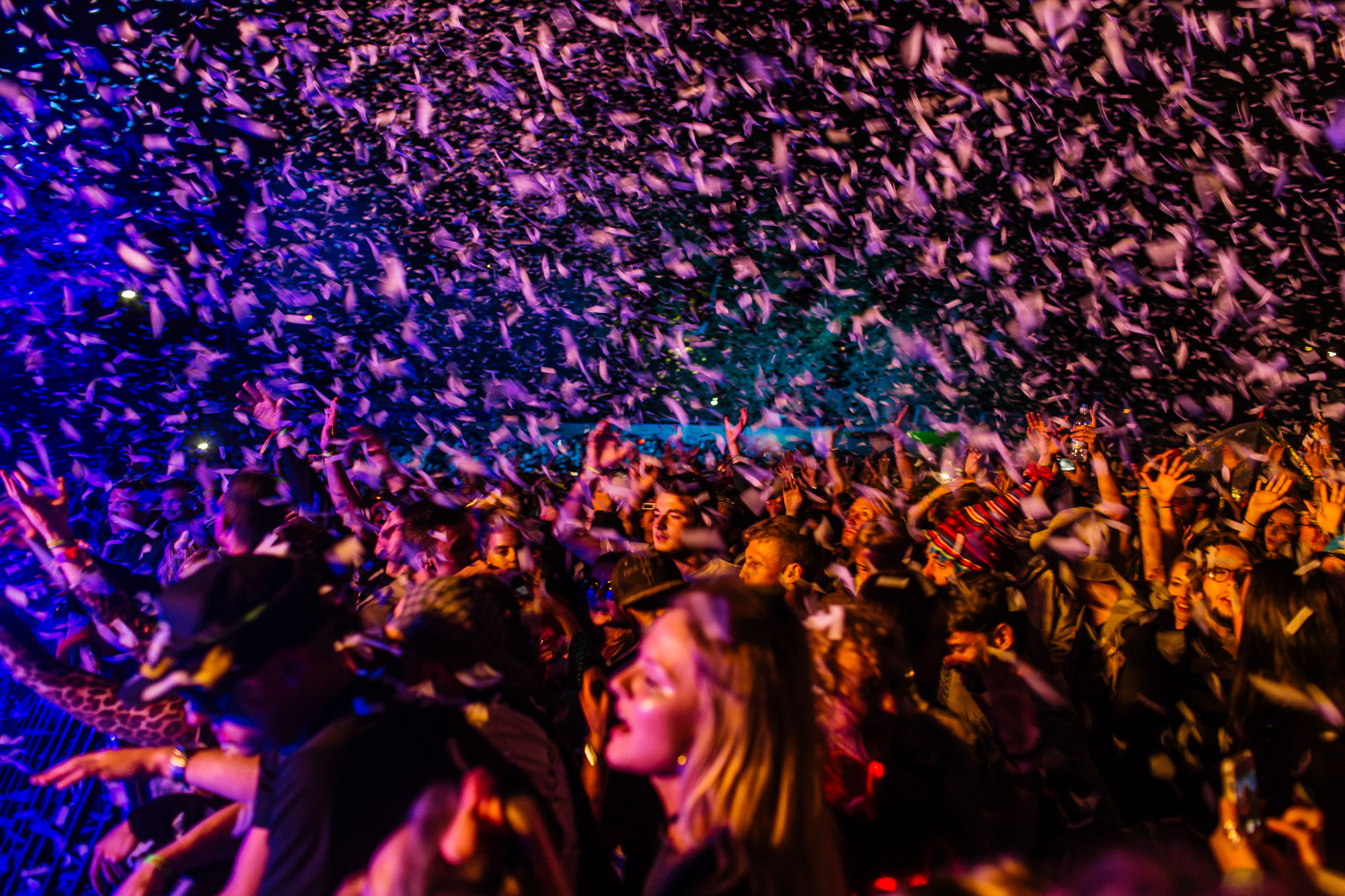 In 2014, headliner Nile Rodgers gave Bestival a challenge worthy of the man who gave the world "Good Times": to build the world’s biggest disco ball. They took on the challenge in classic Bestival style and, in conjunction with the creative firm Newsubstance, built a 10.33-meter-high ball that was raised and spun during Chic’s Sunday night set. For 2017 they’ve decided to erect the world’s biggest confetti cannon, which they’ll deploy at the Temple Stage and ensuring instant colour vibes for the crowd.

Happy Kanye Is In Town 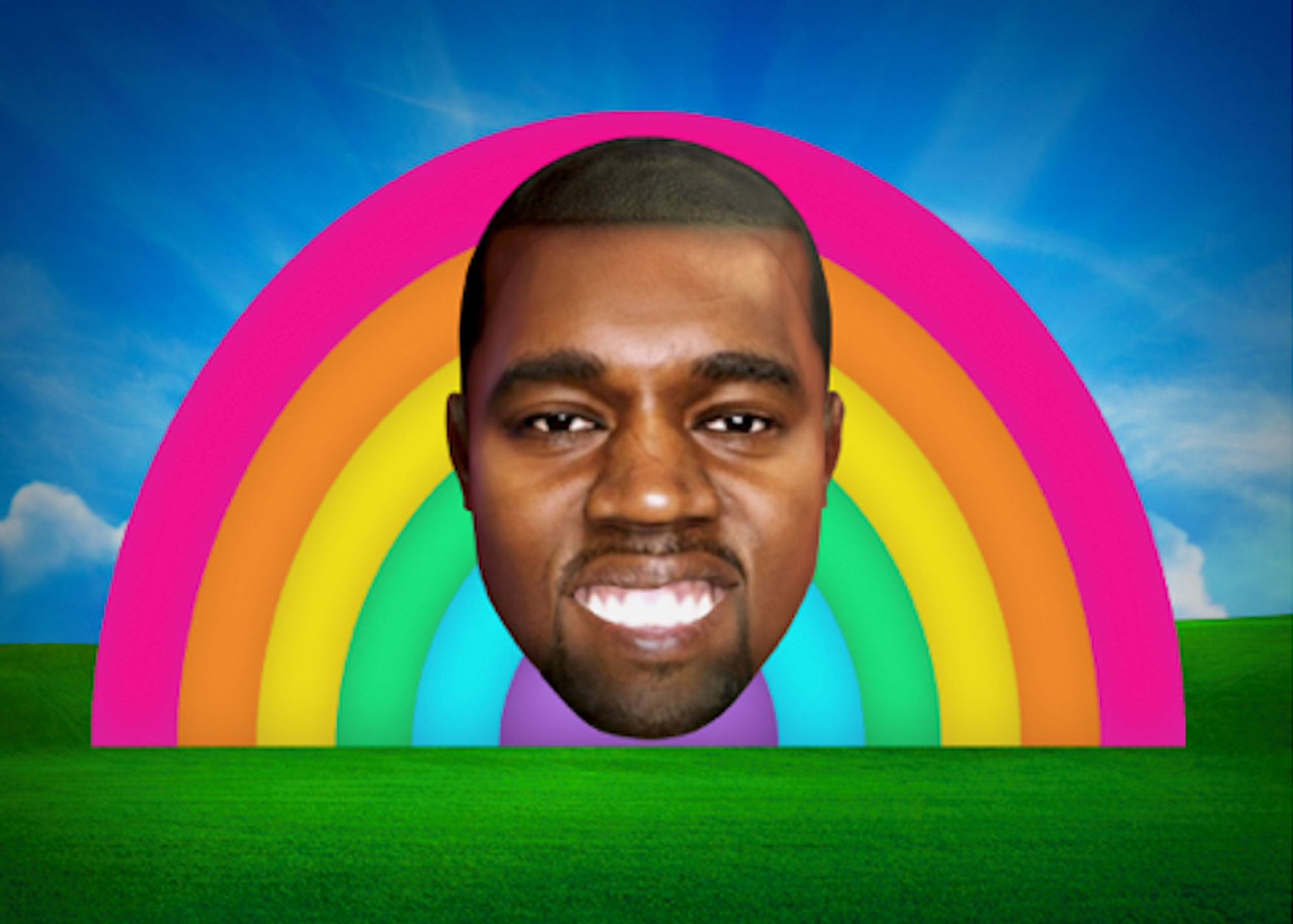 Sad Kanye has been one of the most popular memes of recent years, but Bestival is all about the love. With this in mind, they’ve decided to craft their own unique tribute in the form of a seven-meter-high sculpture of a grinning Yeezus – literally putting a smile on Kanye's face. Hopefully he'll see it and start to make some positive changes to his outlook, making the smiley incarnation of himself a reality.

Bestival’s previous themes have been legendary; over the years they’ve seen festival-goers go under the sea, into the space and way into the future for outfit inspo. 2017 has been deemed the Year Of Colour and promises to see attendees embrace the rainbow in the name of brightening everyone's day...and nabbing a brilliant Instagram picture or two.

It’s Got A Brand New Site! 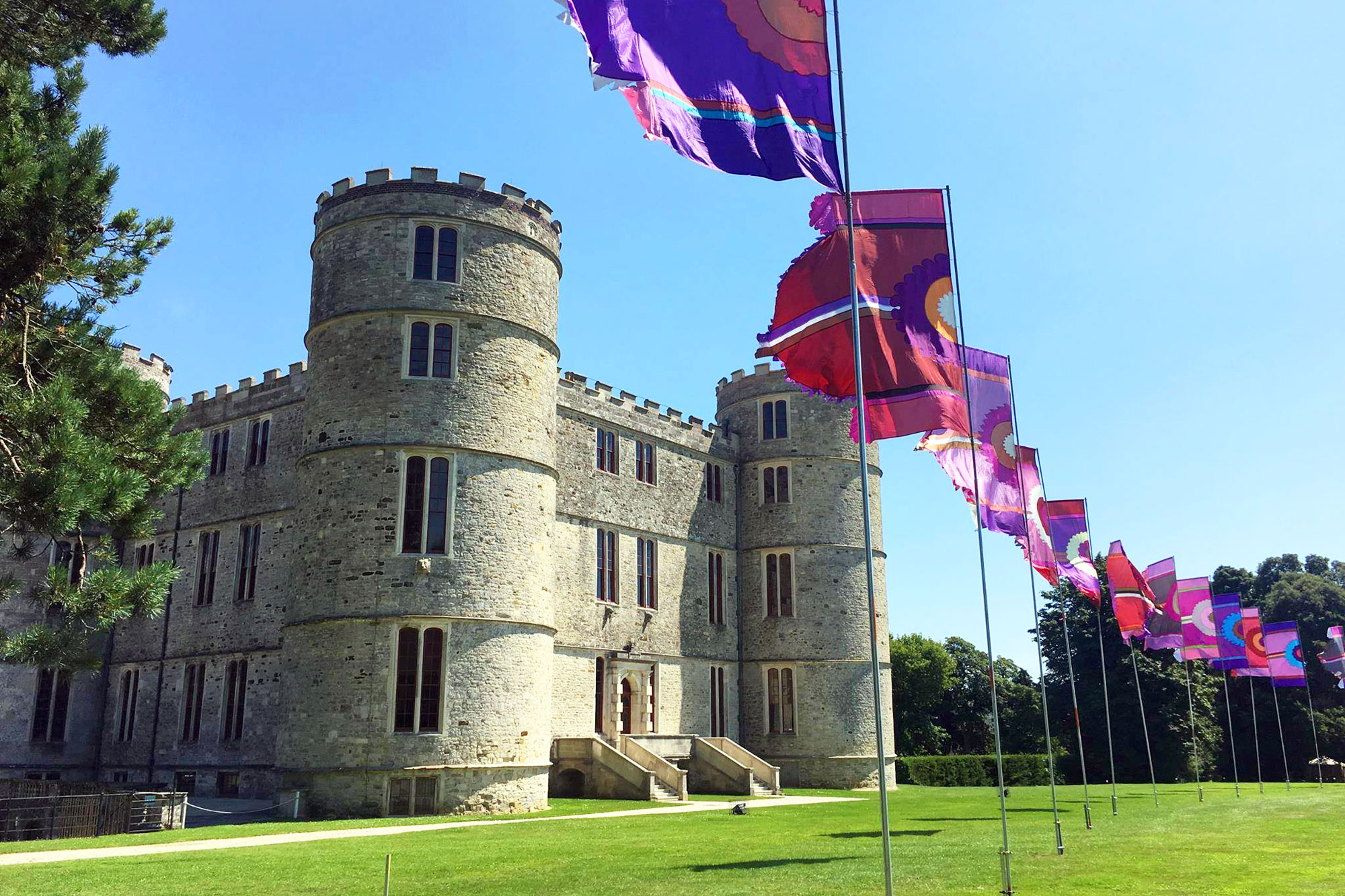 Since it started, part of Bestival’s USP has been the rolling hills of its undulating site at the Isle of Wight’s Robin Hill Country Park. This year they’re moving to Lulworth Castle in Devon which, conveniently, is also the site of their kid-friendly event Camp Bestival . For those of us who still have nightmares about the soul-destroying walk up Robin Hill on the Monday morning after Bestival has finished, this news could not be more welcome.

Embrace The Day With Wild Runs 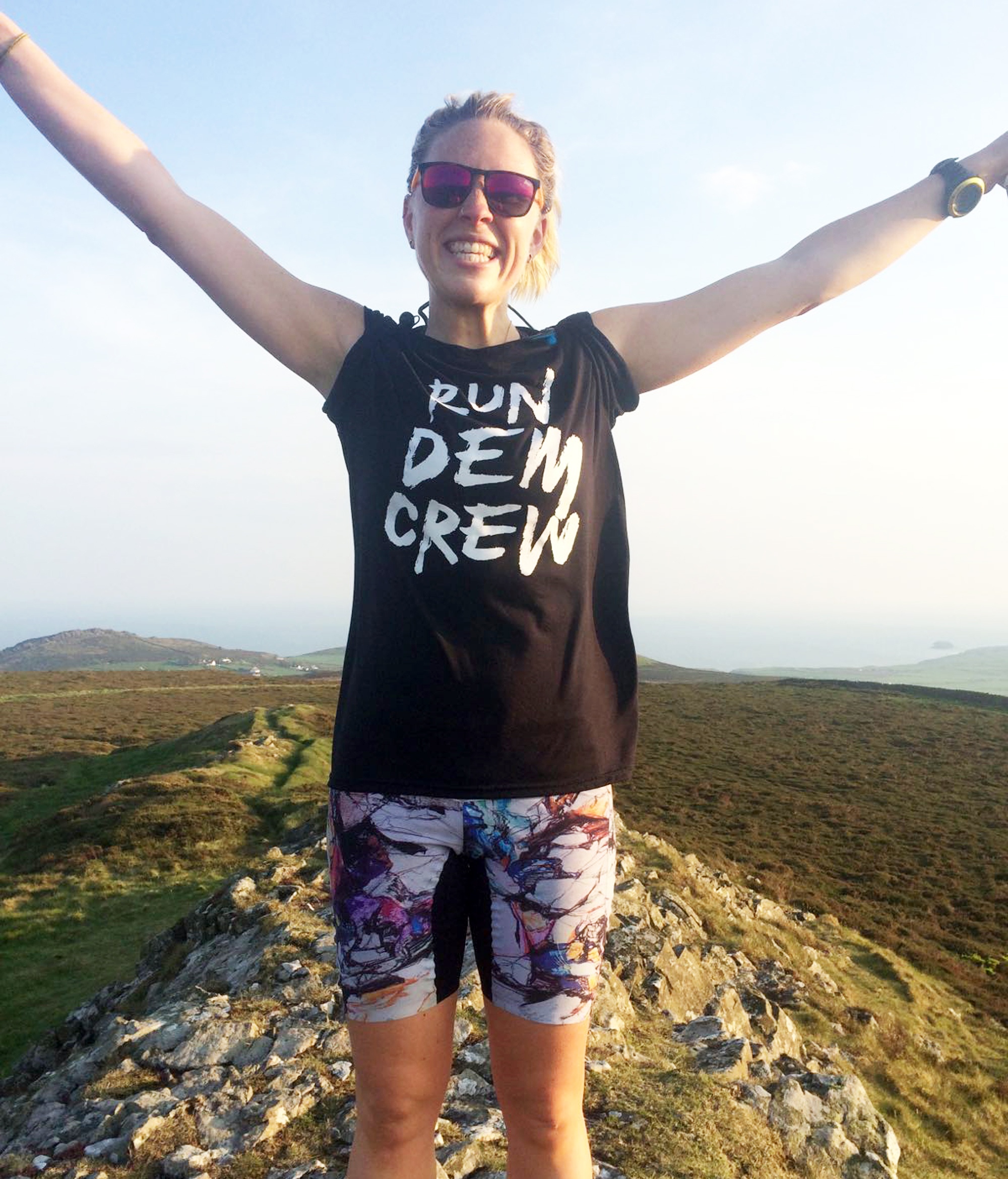 For many people, attending a festival is an exercise in unabashed hedonism. Increasingly, however, as younger generations become more image-savvy and health conscious, festivals are running massive health and wellness programs. Bestival has a Slow Motion area with all the yoga and exercise classes you can shake a stick at. For those who want to get offsite, there’s the Wild Run with Lucy, where festies can blow out the cobwebs with a jog round the festival’s surrounding trails before finishing with a group chorus of "Ziggy Stardust."

Chop Yourself Into Shape With A Free Haircut 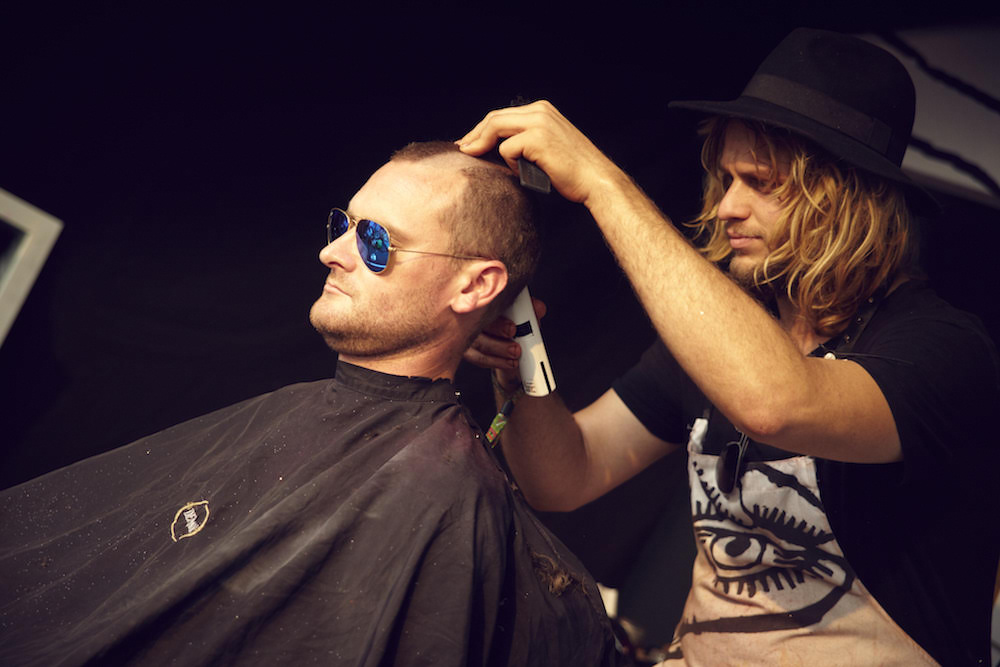 There was a time when going to a festival meant casting aside any concerns regarding hygiene and appearance for three days of filthy, sweaty abandon. Well, those time are long gone now and now you'll find festies who place equal importance on looking their shiniest and sharpest at all times. Thankfully, Bestival has a free hairdressers on-hand 24 hours a day to ensure your 'do is never anything less than stellar. Yep, seriously. You can also hit up Sailor Jerry's tattoo parlour if you're feeling extra brave.

Get Hitched In The Inflatable Church 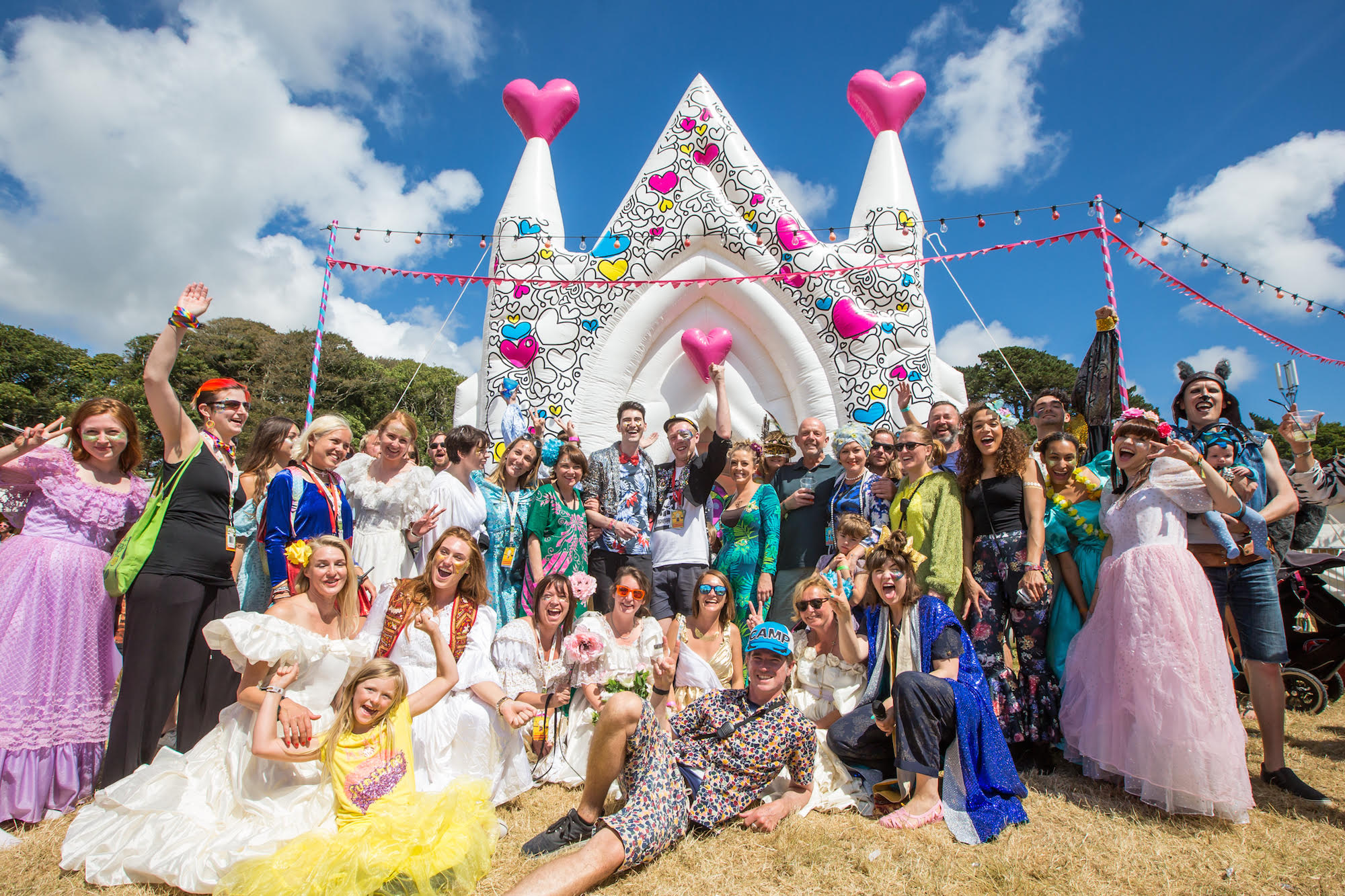 Few things sum up Bestival’s love of the absurd better than its inflatable church. Over the years, thousands of festival goers have said "I do" and been wed in festival matrimony by the lunatic vicars that man this institution’s pulpit. Said weddings (fortunately not actual weddings) are bookable for £40 per couple and come with bride and groom costumes, hair and make-up, a wedding certificate and photo. Truly, the greatest day of your life! 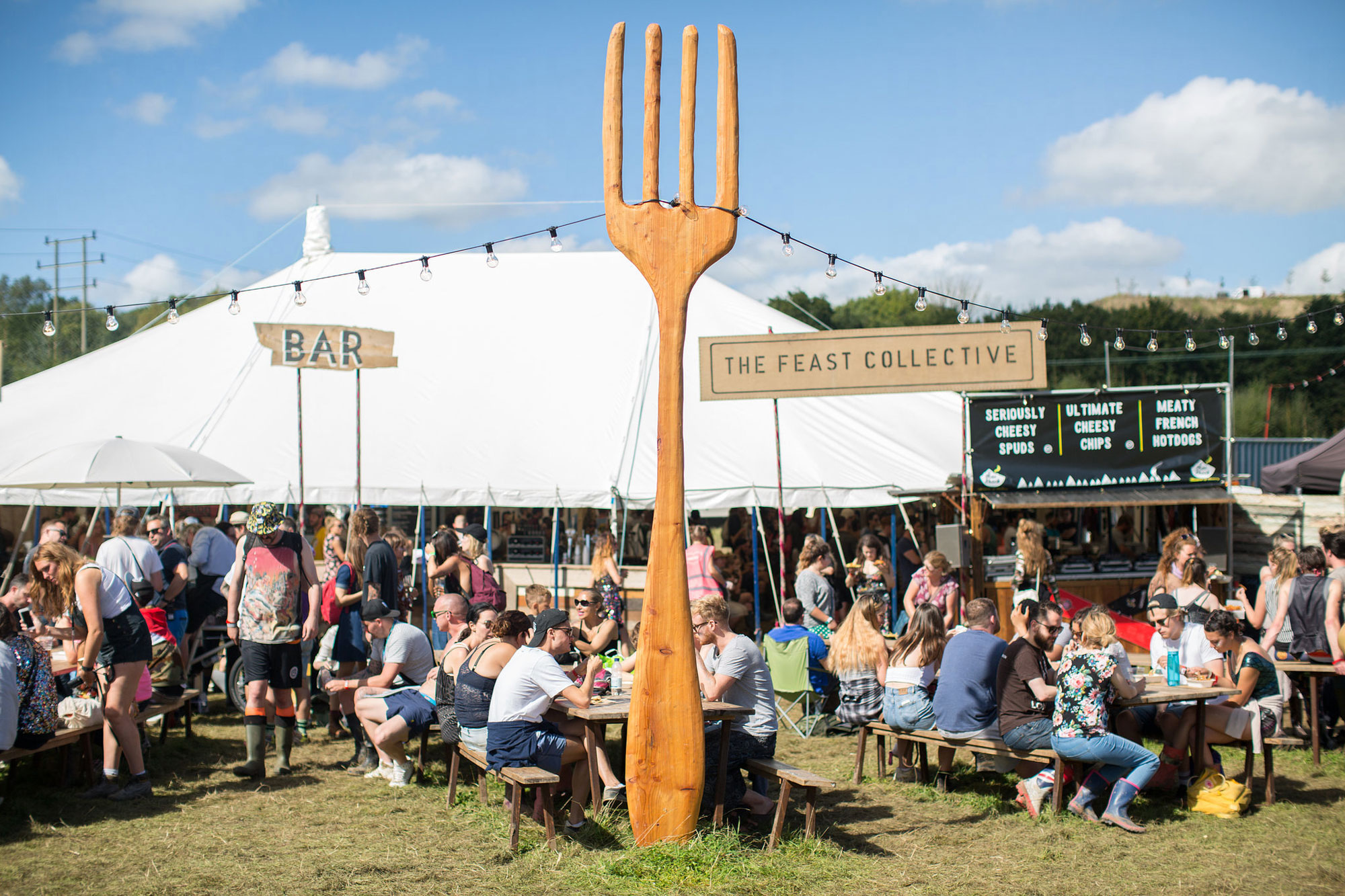 Bestival was one of the UK’s first festivals to really embrace the street food scene, and move the concept of festival food away from chips and bacon sandwiches. Feast Collective is a foodie’s cornucopia with the only negative being its potential to inspire bouts of extended procrastination about where to eat lunch. We can deal with that, as long the ramen van hasn't sold out. 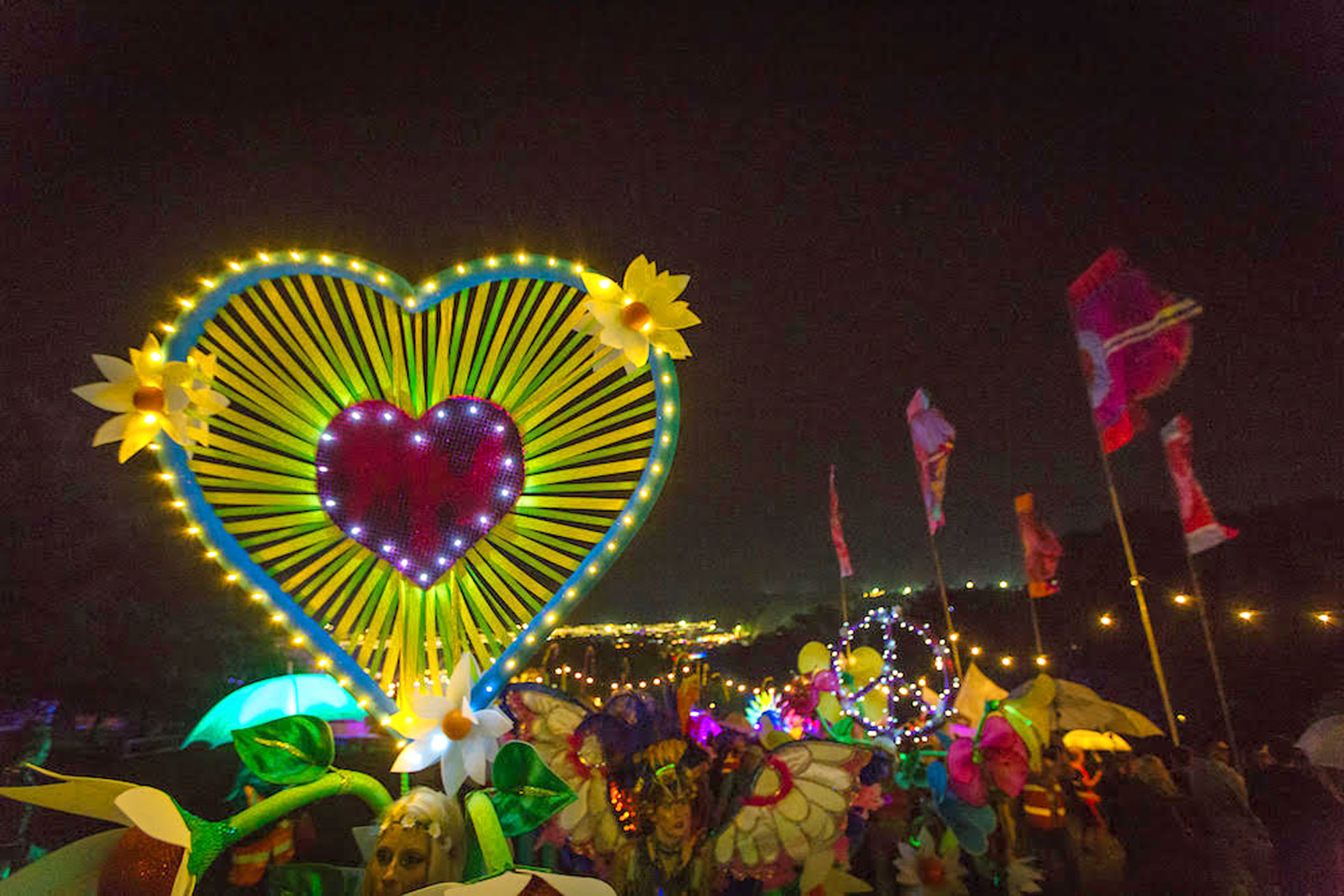 Bestival comes alive under cover of darkness, and its Night Parades are a thing of spectral wonder. Expect to find apparitions, giant puppets, spooky floats and an all-round explosion of colour and sound. And if you want to tag along and follow them around we’re sure they’d be delighted to have you join the parade party. Just jump in and lose yourself in the crazy carnival of night time marauders.

Embrace The Weird At Cirque Bijou 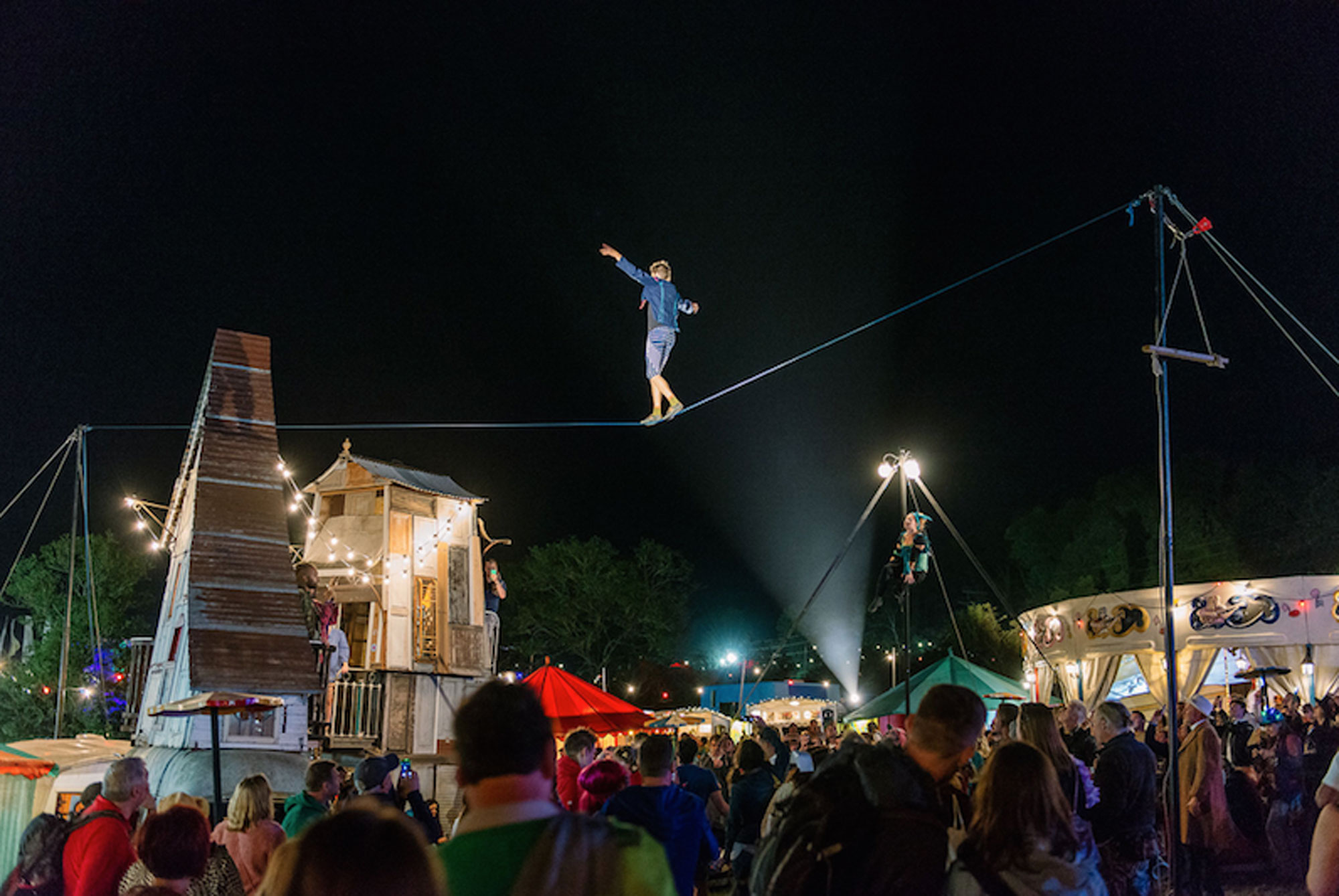 Whether you like your circus bizarre or simply lowbrow, Bestival’s resident circus troupe will be keeping its visitors in a state of wonder throughout. By day the vibe is more kooky street show, then as night descends the the sequins come out and you can expect to have you minds blown by acrobats, fire performers and more trapezes than you’ve seen outside of a Barnum & Bailey's. 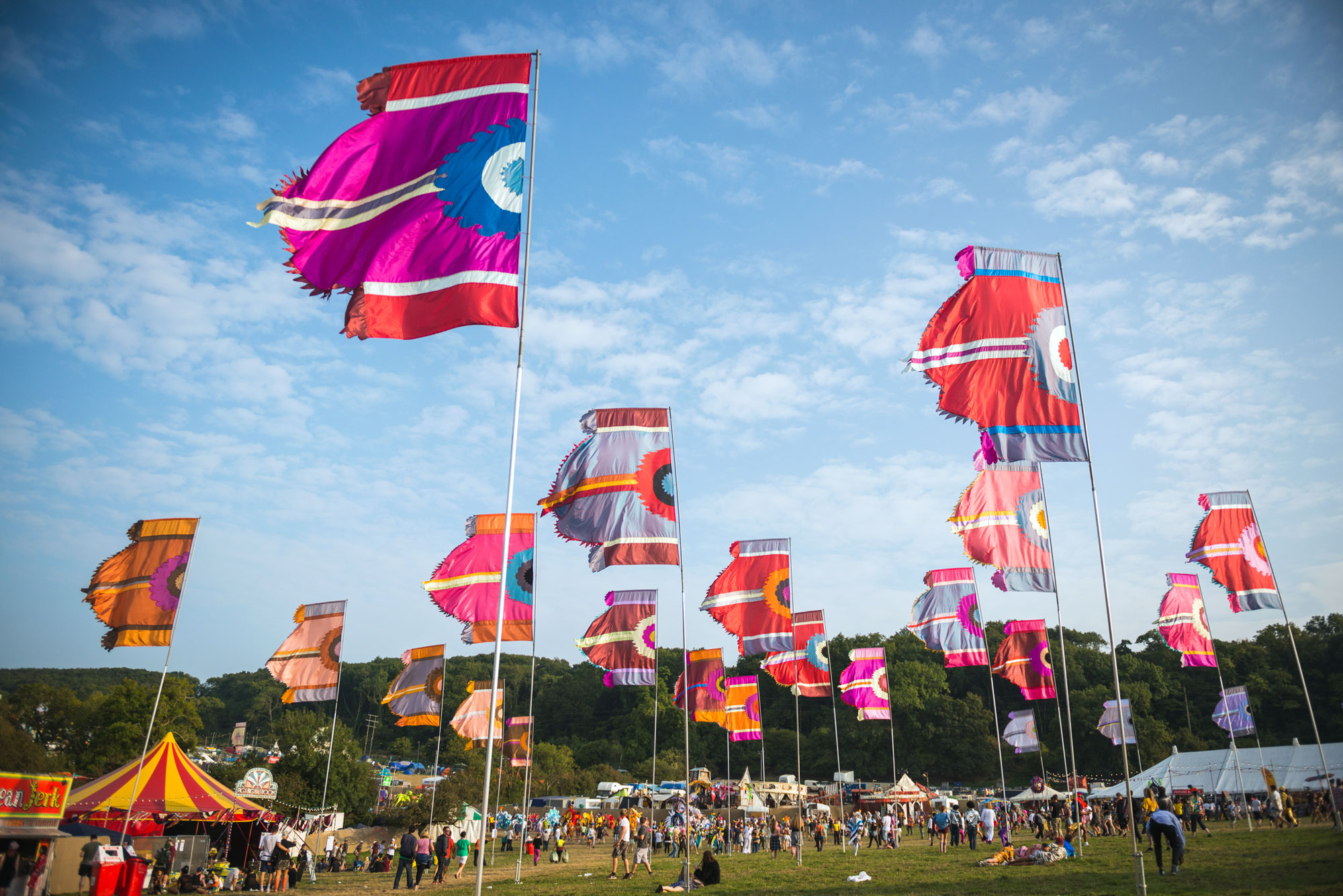 Bestival chief Rob da Bank has never been shy of trumpeting his love for Glastonbury , and presumably the flags for which Glasto is so famous had an indelible impact on him. The Bestival site is framed by them and they form an intrinsic part of the site’s decor and drive home the fact that Bestival truly is a fantastical land of its own – one where its citizens are governed by only one law: to have as much fun as possible on Earth.