15 Of The Best Festival Food Vendors In The UK

When it comes to festival essentials, food is high up on the list of things that enhance your experience. Not only does good festival food mean happy bellies all around, it's also the fuel that keeps us going, the sustenance for our systems that helps dance for a few hours longer or traipse from one side of a festival to another for days and nights on end. In short, food is an absolutely crucial part of the festival experience.

Fest300 recently visited the Association for Independent Festivals' one-day conference called Festival Futures, where we saw Mark Laurie (director of the Nationwide Caterers Association) host an insightful presentation on the evolution of festival food and the connection between the growth in popularity of gourmet caterers and the tastes of the UK population. In a nutshell, food has improved greatly at festivals to cater for the demand of festival-goers, who are becoming more and more food conscious; no longer is it acceptable to have a dodgy burger van on-site and a few low-rent ethnic cuisine specialists. Nowadays, people want more. They want exotic fusions, healthy alternatives, vegan, fair-trade, quirky ideas presented in a polished manner, or back-to-basics food cooked well; whether it's fish and chips, cheese on toast, sushi burritos or twists on traditional fare from across the globe, everything is catered for by a growing number of independent street food specialists around the UK.

With Mark's help, we contacted several experts in the field of festival grub and we've compiled a shortlist of some of the most noteworthy enterprises from the thousands that are out there. The word from Mark himself was that fish-based start ups will be big this season, he also mentions Korean fried chicken as one that will be filling festie stomachs during Summer 2016. Get your knife and fork ready...

This is a delicious, super healthy Hawaiian dish that made its way to the UK via California and New York, and word on the street is that’s it’s going to be huge in Britain. They’re part of Kerb, a street food market that houses a large number of innovative businesses, all of whom are currently whipping up a storm in the world of gastronomy. Pokē's fish salads are bound to be a winner at festivals around the UK this summer.
Catch them at: the UK festival circuit next summer.

Established in 2013, The Cheese Truck is a self-explanatory enterprise that takes one of Britain's staple snacks and adds a bit of polish to it. The company produces grilled cheese sandwiches to an exquisite level and have not only spent many weekends at festivals around the country, but also taken their cheese overseas to places like Dubai. It goes without saying that cheese is almost universally loved, and the team behind The Cheese Truck have created a venture that will be popular for a long time to come.
Catch them at: Glastonbury, Love Supreme, 2000 Trees, Sunfall, Farr, Lovebox, Liverpool International Festival, Bluedot and Port Eliot Festival

British food is never placed alongside the gastronomic delights of its Europeans cousins. While French, Italian and Spanish cuisine is held in high esteem around the world, Britain just doesn't get as much praise – but The Roadery will go a long way in changing that. Their use of ingredients that are found in British habitats, and their inventive use of those ingredients, means they are one of the most exciting street food specialists out there. The Ox Tongue Braco (British taco) is particularly amazing.
Catch them at: Stables Market in Camden, London and back on the festival circuit in 2017 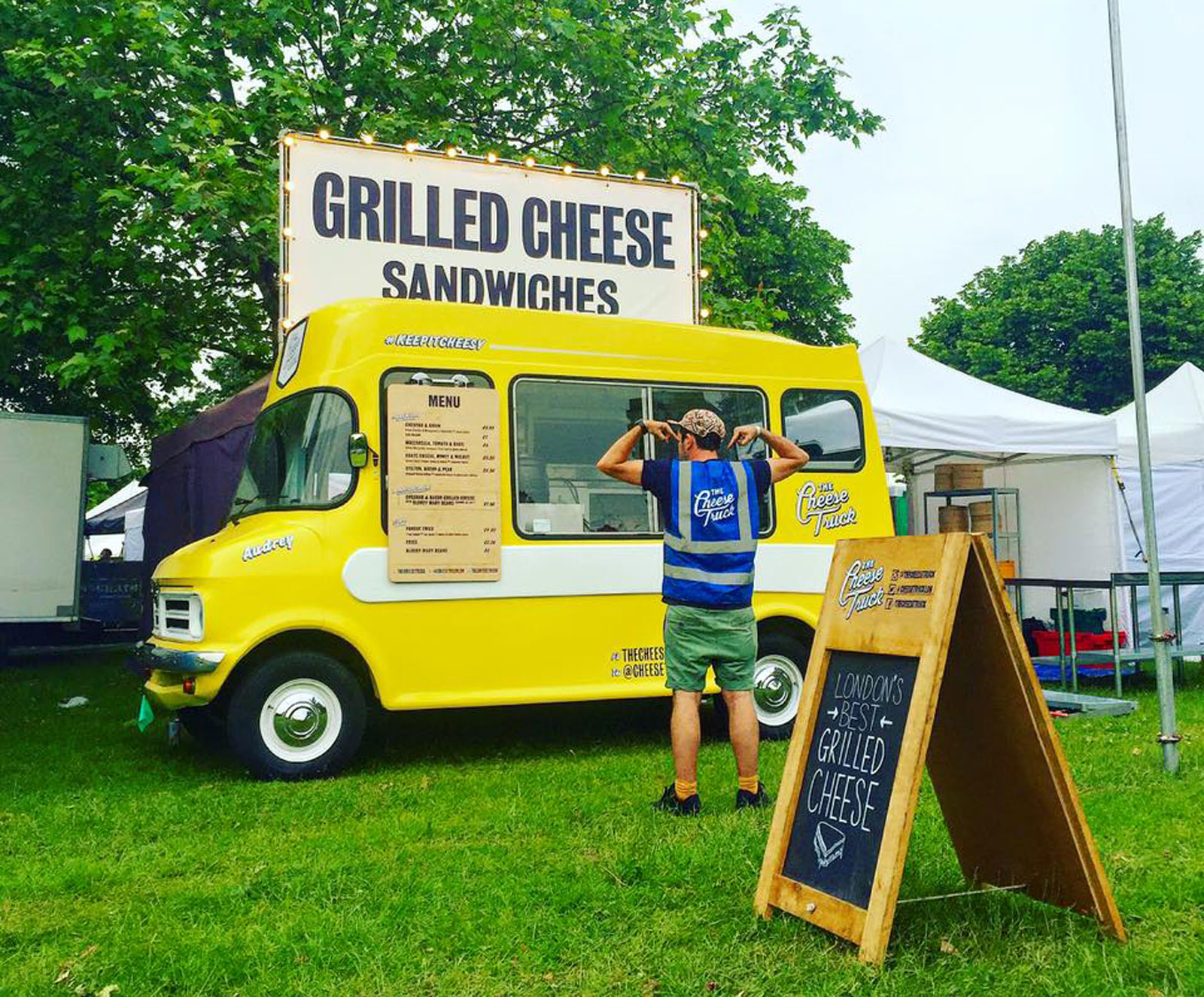 Lee Desanges is the mastermind behind Baked In Brick, a visually unforgettable little food outlet that serves up wonderfully crisp, tasty Neapolitan style pizzas, and other dishes cooked in a wood-fired oven in a classic Mini, which also has a barbecue installed where the engine should be. Yes, installed in the car! Lee decided to inject his experience as a chef into the young business, which has only been around for just over a year. In that time though he has achieved a large degree of success, and become the talk of many festivals and street food events.
Catch them at: Street food events in Birmingham and on the festival circuit in 2017

A restaurant owned by one of the best-known DJs on the planet could have turned out pretty lame - but it's actually one of the best new eateries in east London and is behind some of the juiciest, most delicious and succulent barbecued meat you may ever chow down on. Seth Troxler is the man behind Smokey Tails, which has a permanent home in Hoxton Square Bar & Kitchen in east London, and his penchant for cooked meat, together with some family-owned recipes, has made this a carnivore's dream. We enjoyed some of the pulled pork last year at Glastonbury and can't wait to try out some of the other specialities on their menu.
Catch them at: The Beat Hotel - Glastonbury, Wilderness Festival.

Good old mac n' cheese has been our saviour on many occasions. Anna Mae's has become a big hit over the last six years not only because they have put so much effort into making the timeless classic interesting, with gourmet toppings and novel twists – the company also serves up all its yummy food in a super cool GMC Vandura. We highly recommend tracking them down if you can.
Catch them at: Glastonbury, Wilderness Festival, Festival Number 6, Secret Garden Party and Green Man. 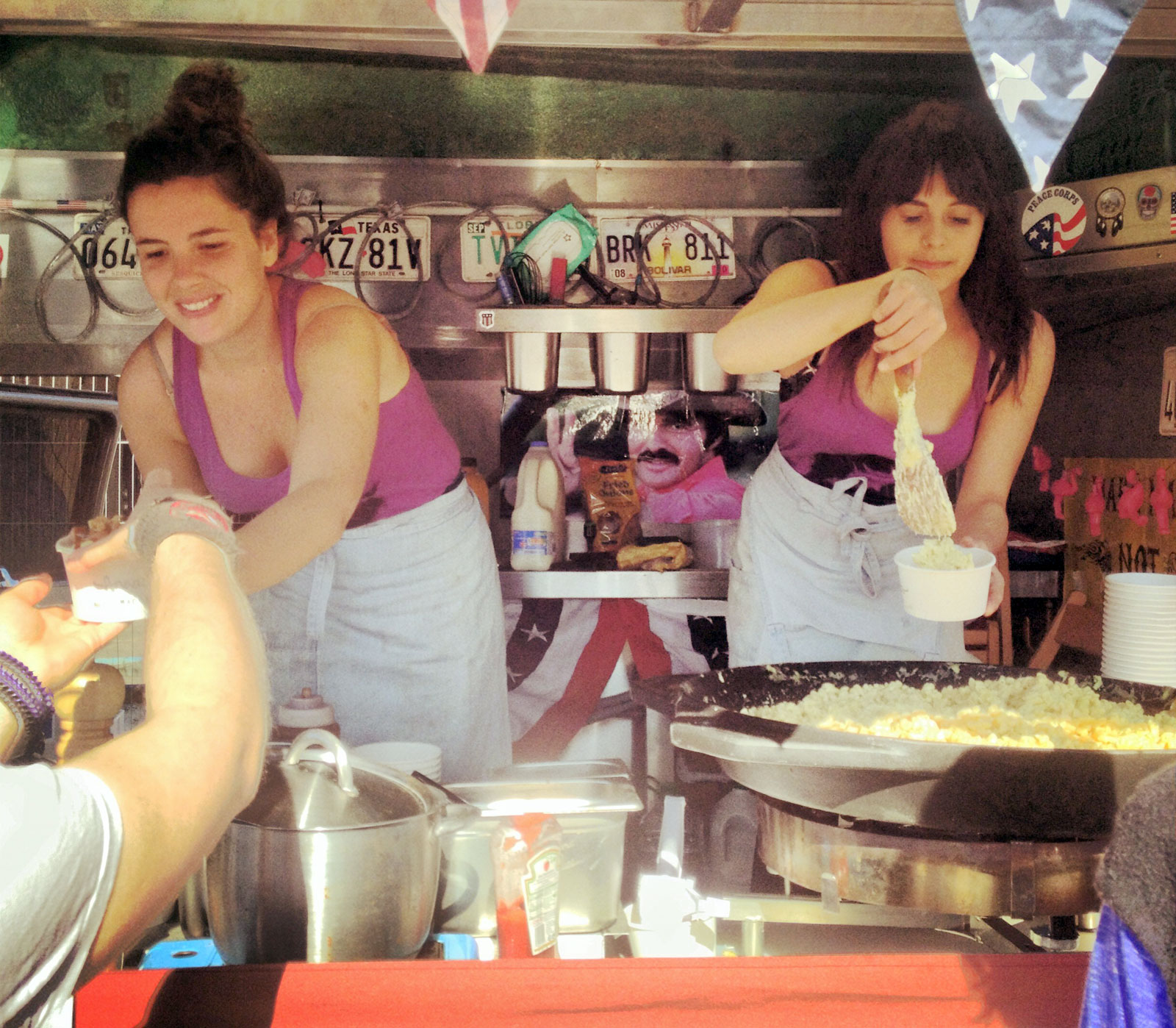 In 2011 the married couple behind Jabberwocky, Barny and Flic, were tired of their day jobs and wanted to get involved with something that utilized their respective skill sets. Their hugely popular toasty business is the result and it's provided them with a whole new working life and, more importantly, allowed them to connect with a broad range of people up and down the country. Needless to say, their menu, which consists of some of the most scrumptious toast variations you'll ever taste, is a surefire winner.
Catch them at: Towersey Folk Festival, Upton Blues Festival, Warwick Folk Festival, Stratford River Festival, Peace Festival, Leamington Beer Festival, Napton Music Festival and more.

This is a vibrant business that started in London back in 2012 as a monthly pop-up that merged music and a seriously good cooking. In the last four years WMCJ have gone from strength to strength and are now part of the street food fabric of London. Their mix of pristine jerk chicken (made from a killer recipe) and Caribbean fusion dishes is to die for. As avid fans, we recommend their wings, which are so tasty that we are salivating all over our desk right now!
Catch them at: The Magic Roundabout (London) 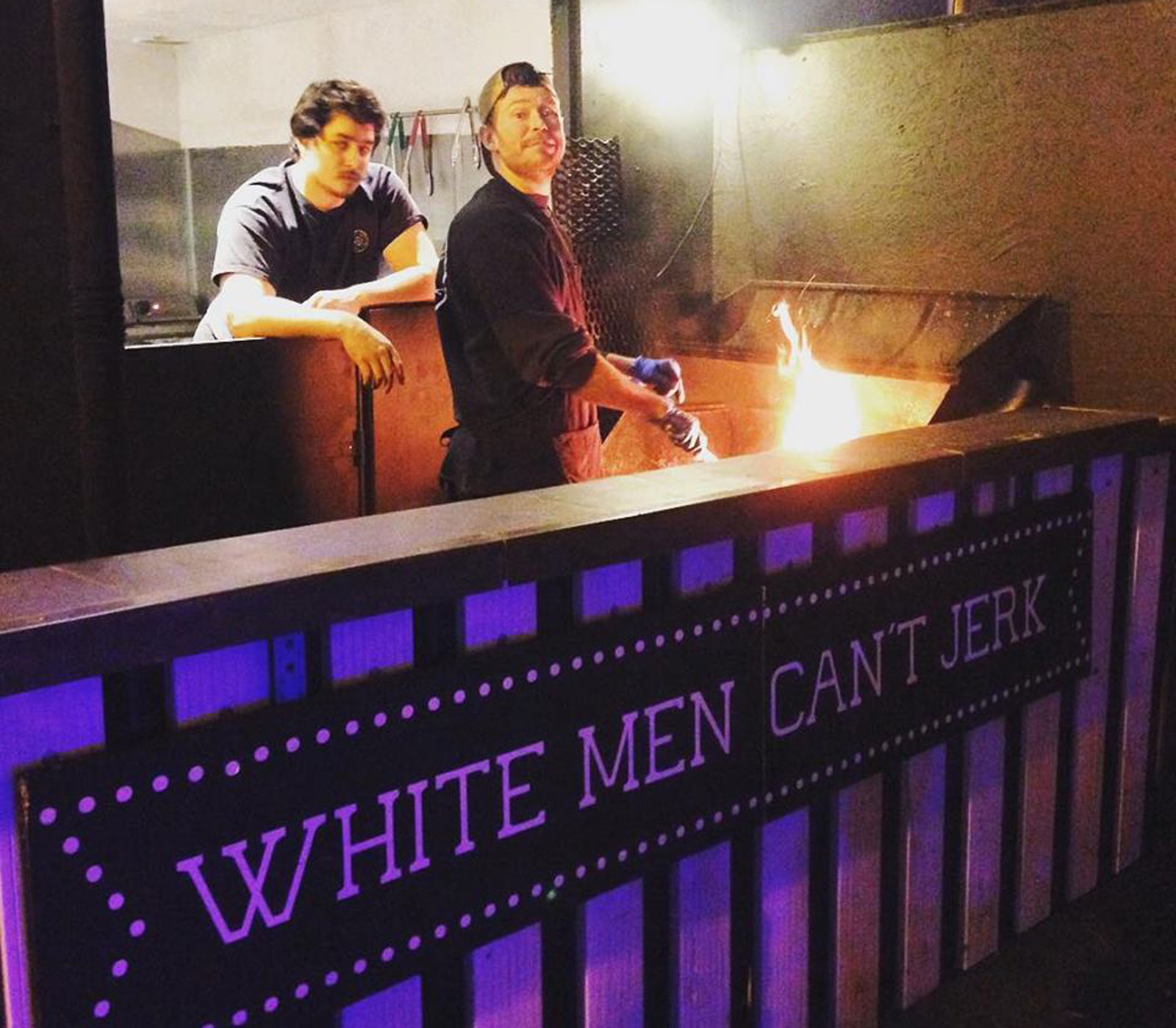 Started in 2010 in Pembrokeshire, in the south west of Wales, Beachfood lives up to its name by supplying a range of expertly prepared seafood dishes with a nod to the county's local cuisine. It has a shop which serves up all of their mouthwatering dishes, and it will be regular features on the festival circuit this summer, including Wilderness Festival, which many festival-goers will attest to being a hotspot for some of the UK's finest street food stalls.
Catch them at: The BIG Feastival, Glastonbury , Cardiff International Food & Drink Festival, Wilderness Festival and more.

A product of the slow food movement, Slow Pig is also based in Pembrokeshire and works to be an eco-conscious enterprise. The pigs they use for their pork are free range, and live happy lives. Ingredients are sourced locally and Slow Pig aim to exemplify the slow food movement, where the ethos is to "reconnect people with where their food comes from and how it is produced so they can understand the implications of the choices they make about the food they put on their plates....to encourage people to choose nutritious food, from sustainable, local sources which tastes great."
Catch them at: the UK festival circuit next summer.

A great British tradition mixed with hip hop-inspired names and the music, plus a van that's been pimped out to resemble a boombox makes for the Hip Hop Chip Shop, a brilliant venture that launched in 2014, and has been the talk of Manchester ever since. All of the elements that make up this business should be enough to make it a worthwhile stop-off when you're out on the festival circuit - but what's also great is their attention to detail and the fact that they only use the finest ingredients: plump white fish, thin and crispy beer-battered crabcakes, soft brioche buns and much more.
Catch them at: Secret Garden Party , Kendal Calling, Grub Beer Festival and more...

Anyone who's been to Canada will be aware of poutine, the dish comprised chips (fries), gravy and cheese. We suspect the UK will welcome this Canadian dish with open arms as Elizabeth Hurst and Michael Palfreeman introduce the sloppy food of champions to the British street food market. All of their ingredients are bespoke and the product of intensive research into what works, and what doesn't. Putting in so much work has paid off and they are without a doubt one of the best additions to the UK festival catering landscape over the past few years.
Catch them at: Street food events around London and on the festival circuit next summer

You want beef? You got it! A wide variety of burgers and beef-related snacks are the staple of this stall. Sometimes when you're running on empty at a festival, all you want is to be full as quickly as possible. Obviously, meat is going to be ideal at providing that very need. Ten-hour, slow-cooked beef delivered in an artisan 'Manchet' bun with plenty of juices and rostis makes this is a winner each and every time.
Catch them at: Underneath the Stars Festival, Leopallooza, Peddler Market, Field Maneuvers Festival and Lubenham Scarecrow Festival

Dosas are a thin, crispy traditional southern Indian pancake which the owners of Dosa Deli make interesting with an array of inventive fillings. Their appearances at festivals and as part of London collective Kerb has put them on the map and the Indian dishes they serve are unbelievably moorish. You will definitely go back for seconds, we can assure you of that. Take the Mysore Masala Dosa Wrap, which is vegan and gluten-free (often a recipe for food that tastes like cardboard), and utterly delicious.
Catch them at: Glastonbury, Mostley Jazz Festival, Latitude Festival, Port Elliot Festival, WOMAD, Wilderness Festival (The Little Lassi Shop), Greenman Festival and more...

Hot Dogs have been a staple of festival caterers for a long time now. They're a quick and easy treat to both cook and to nosh down when you're starving, but we doubt there are many hot dog sellers who put as much thought and effort into their sausages in buns as Oh My Dog! Joel Bowen and his team use dogs that are filled with prime cuts of pork, they make they're own ketchups and sauces, the buns are made from fluffy, mouthwatering brioche and their whole vibe is slick and fun.
Catch them at: British Summer Time and Visions Festival