In 1967, the Summer of Love marked the unofficial birth of the countercultural movement in the United States, and it all started with a festival. Monterey Pop brought thousands to Northern California for historical sets from Jimi Hendrix, Ravi Shankar, Janis Joplin; the buzz set in and the rest was history. Now, fifty years later, Monterey Pop returned for a one-time anniversary event last month, and we're reliving those heady countercultural days all over again. However, for the dedicated fans of High Sierra Music Festival, those days have never seen the rearview mirror. If you're a product of that time longing to drop out again, or a young thing looking for a hit of that rose-colored energy, High Sierra is the unpretentious shredfest you need.

If the Summer of Love was marked by a desire to connect, a love for music, and a nonconformist energy, High Sierra has been carrying that torch for 27 years. Yes, people sport tie-dyed clothing, glassy eyes, and bare feet, but the comparisons stretch beyond. Generations young and old blend in and bliss out, the scene is laid back, and all is tied together with an iron strong community bond. Peace, love and jam bands.

Here are 4 ways that High Sierra embodies those Summer of Love vibes.

Much like Monterey Pop, High Sierra's community maintains itself through word of mouth. That keeps the scene inclusive, and whether you're hanging in one of the tight-knit campgrounds (Shady Grove, what up!), catching some bluegrass in the shade at the Vaudeville Tent, or waiting in line for "Frickles ," everyone is just so damn friendly. That extends to local Quincy residents, who are consistently helpful, kind, and patient despite their small town being overrun by hippies. After leaving a local coffee shop, I accidentally backed my car up against a trailer rack and got stuck. Two women and one man immediately rushed over to help, and I was free in two minutes. This was after a morning full of people offering to help pull my overloaded wagon, offering me beer and giving me big smiles at the grocery store. 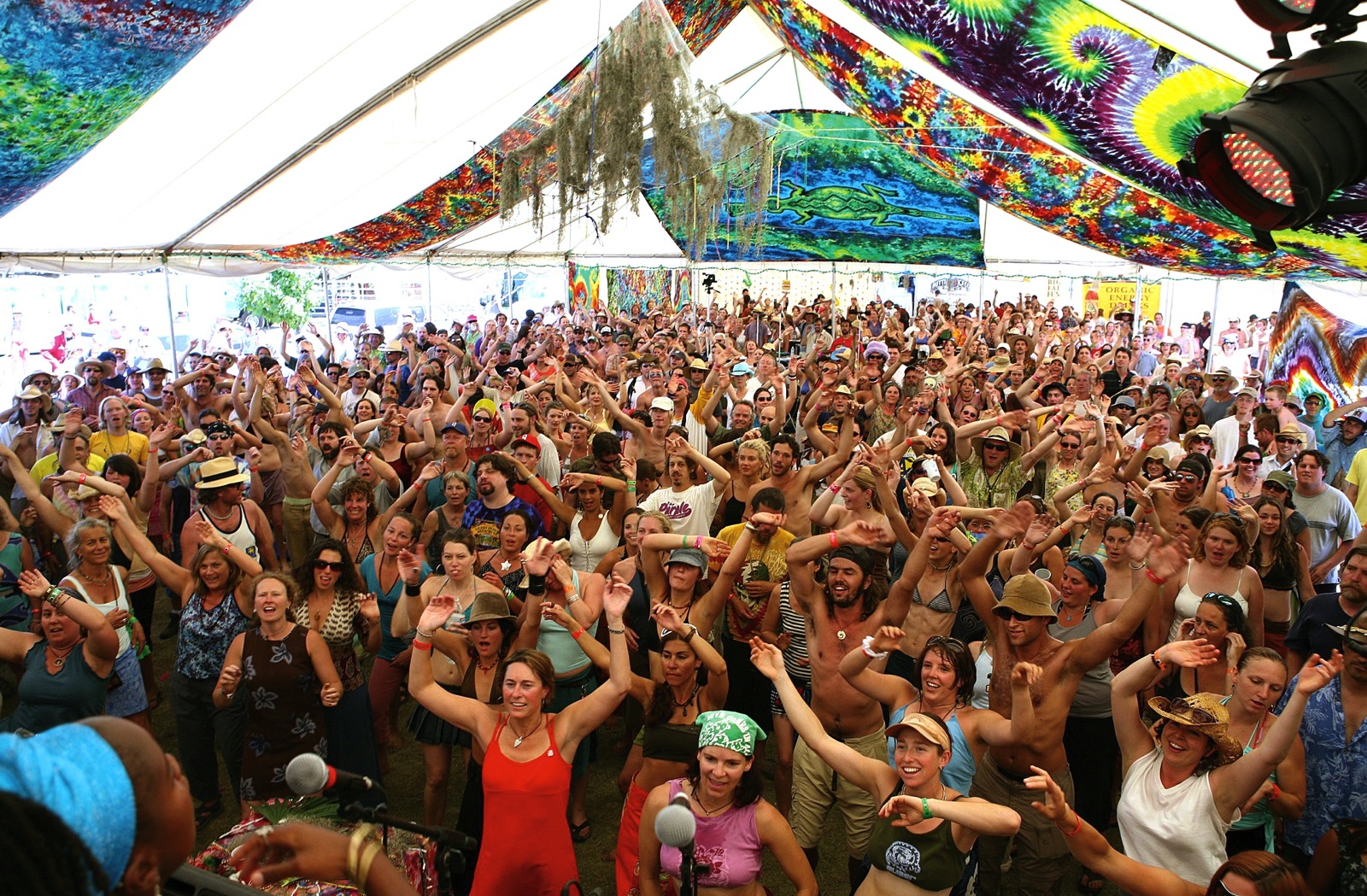 High Sierra's lineup waffles around genres a bit, but this year was definitely on the jammy side. Even if you're not a jam band lover, it's hard not to appreciate what High Sierra puts together. Trey Anastasio of Phish (with a two-part Saturday night set), Gov't Mule, STS9, and Ween headlined, but before, after and in-between those headliners, the party never stopped. "Troubadour Sessions," "Artist Playshops" and late-night sets from Boombox, The Brothers Comatose, Galactic, SunSquabi filled the gaps, along those tasty dance parties in the mildly raucous Shady Grove.

Carolyn Wonderland's Saturday afternoon tribute to recently deceased Greg Allman, titled"Ain't Wastin Time No More," was lovely, and Gov't Mule also got in on the tribute action with an epic rendition of "Whipping Post" towards the end of their Sunday night set. Next big thing Con Brio lit up Big Meadow on Thursday night, and after Saturday night's funkfest from Cory Henry & the Funk Apostles, I'm their newest disciple. 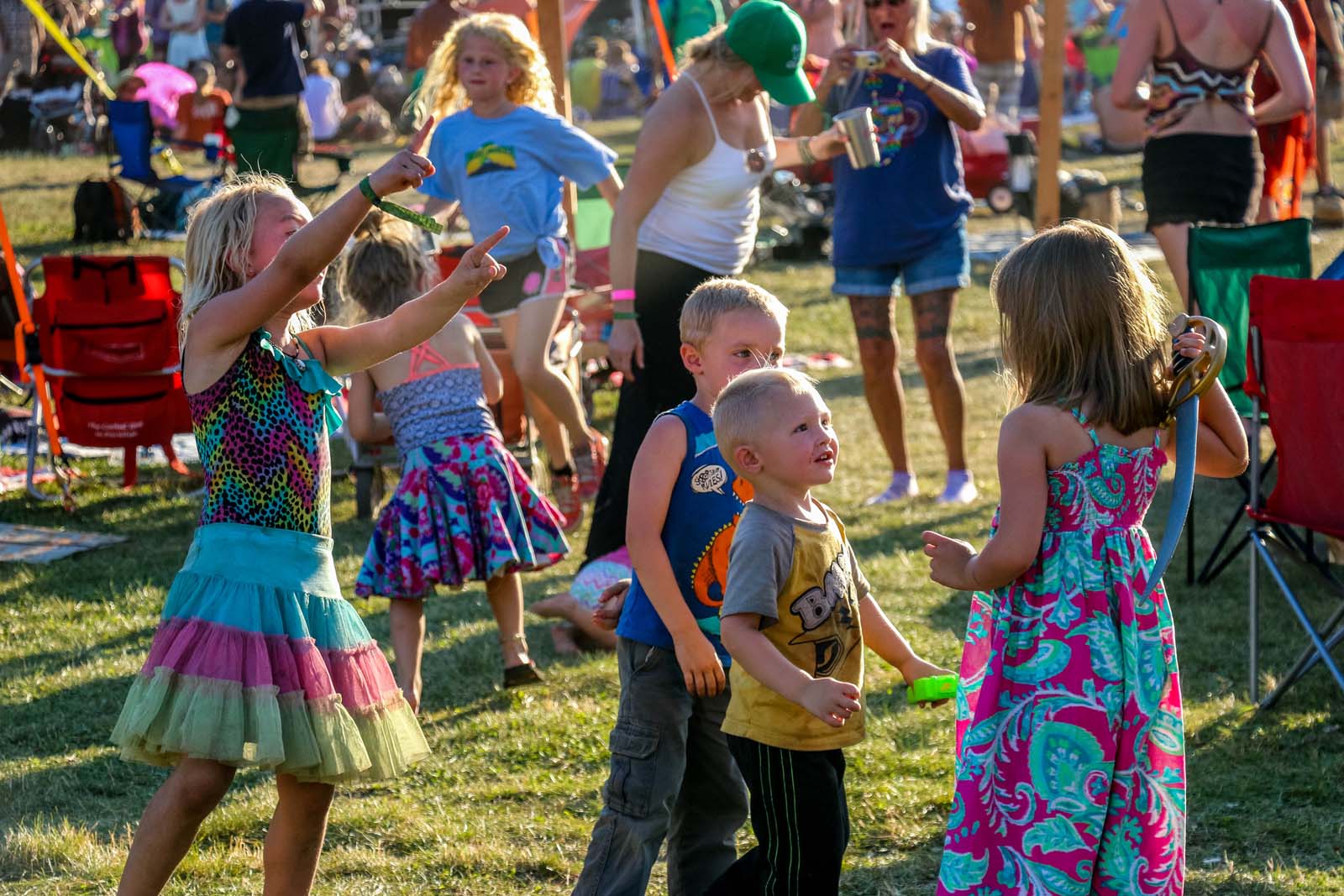 The Summer of Love was a lot of things. It was a peaceful youth revolt against the materialism of older generations, a period of defeated optimism fueled by psychedelics, a moment in history that opened doors to distrust of the government and authorities, and general pushback against the status quo. Ultimately, however, it was about unity. Unity towards a common cause. At High Sierra, this sense of unity manifests in young and old sharing the same space, enjoying the same music, and interacting where they probably wouldn't have otherwise.

Many festivals these days, like Lightning in a Bottle and Camp Bestival,  offer a family-friendly experience, but no one brings in more seven and seventy year olds than High Sierra. Rare is the festival that can pull off both crowds, and what a treat when that happens since w atching children at festivals is as entertaining as anything you'll find in the lineup guide. U s adults can grow jaded and/or generally unimpressed with impressive elements of an experience because we've experienced it before. Kids? None of that. The delight is real. I wandered into an air-conditioned lodge during Sunday's brutal heat, and the five minutes I spent watching a six-year-old girl perform a card trick I'm not capable of, in a talent show emceed by a "hungover" purple puppet, were some of my favorite minutes all weekend. 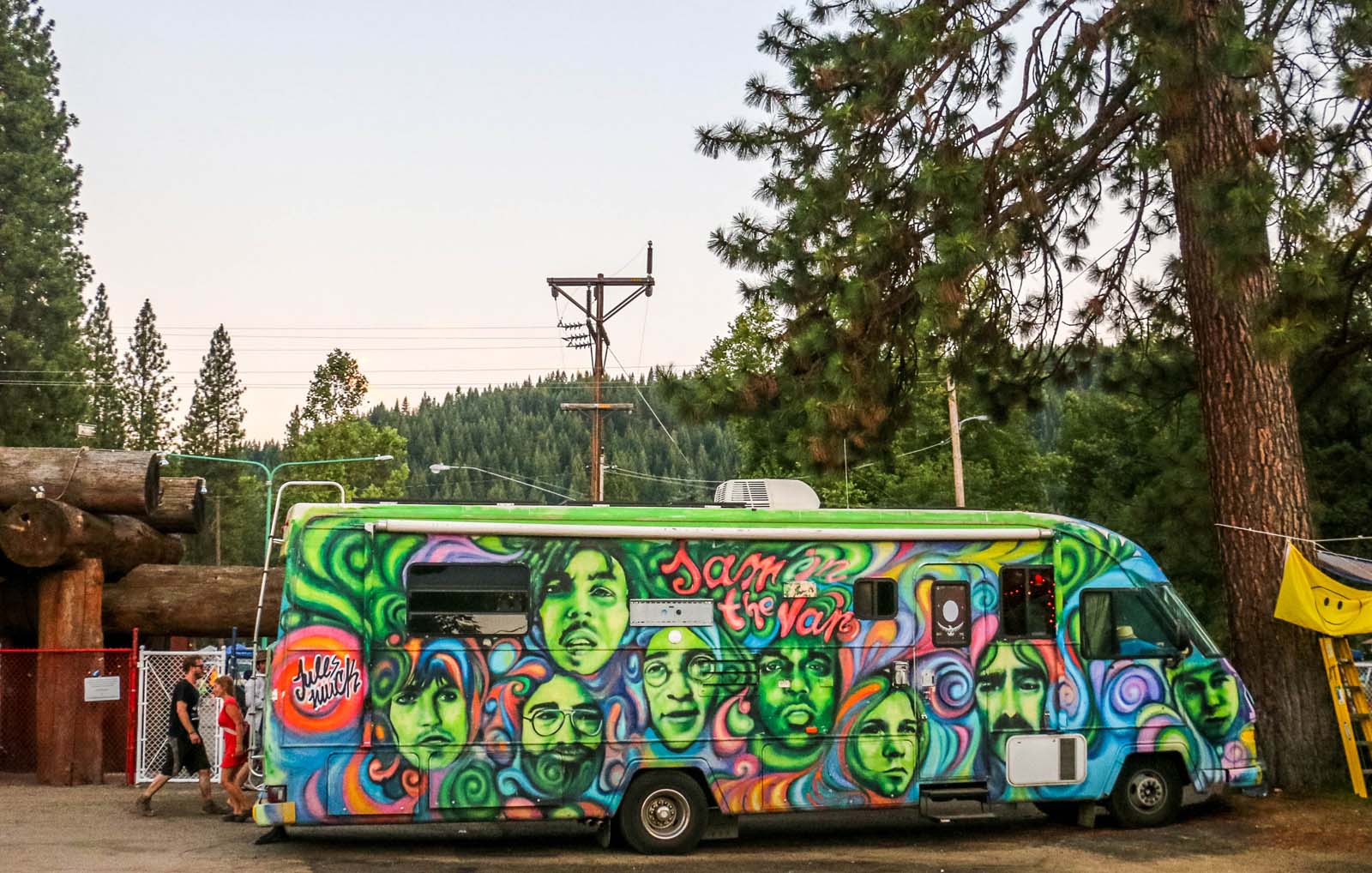 Impossible is talking about either of these events without a psychedelia shout-out. High Sierra's unique dose goes down in the funk-meets-folk-meets-acid bluegrass-meets-rock-meets-jazz (ish) musical lineup, via festival posters, handpainted artwork, overall production style and, yes, the attendees' choice of clothing. Much like what we saw in 1960s San Francisco, explosive color runs rampant on those Plumas County Fairgrounds, and if you were wearing all black (like me), you'd be easy to spot in a sea of tie-dye. You'd also be brutally hot and wishing you were in lighter, brighter colors (like me). High Sierra runs daily costume themes, and Sunday starred "Summer of Love"- related attire.

The central chill zone of the festival, "The Lawn"/" The Meadows"/"whatever you'd like to call it" goes from daytime low-key  groove spot to nighttime psychedelic wonderland. Trees circle the field, and trippy light projections bounce from branch to branch. Hula hoops patiently wait for willing booty shakers, the neon outlines of silent disco headphones bop erratically, and yes, tie-dye is out en masse. Hammocks, slacklines, and those legendary morning kickball games await the sunrise crowd.