The jam band community is a tight-knit one. Concerts by artists like Phish, String Cheese Incident, and OG jammers The Grateful Dead before them, are much more than just a show. They’re more family reunions that diehards travel far and wide to experience. And entire festivals built around that warm and welcoming vibe are their own breed of event where both bands and music lovers alike engage in an intense exchange of artistry, inspiration and emotion for hours on end.

Jam band lovers come to festivals for the vibe and, of course, stay for the music. Jam band music famously knows no constraints of genre, time, or format – exactly the atmosphere we're chasing when we go to festivals in the first place.

Below are the nine festivals (and one honorable mention!) that are tailor-made for jam band lovers.

Set in a quintessential mountains-and-rivers Pacific Northwest landscape, High Sierra puts a counter-culture spin on everything: the food is organic, the atmosphere unbounded, the attire one-of-a-kind, and the music pioneering. The core value of the HSMF is good music. The festival was founded in 1991, and has since grown from 20 artists on one stage to a 10,000-person event with more than 50 performers. Four days is hardly enough time to pack in all the musical goodness, but the organizers do their best with a nearly 96-hour binge of bluegrass, funk, reggae, jazz, electronic and some whimsical fusions like “newgrass” and “country punk.”

Big names lend big cache to this small festival – like Robert Plant, Ben Harper, Widespread Panic, String Cheese Incident, STS9, Ani DiFranco and Primus – but the organizers get a real hit off surprising the crowds with great unknowns, like Umphrey’s McGee and Tea Leaf Green—groups who instantly grew their fanbase with their performances there. Regardless of genre or level of notoriety, HSMF musicians aren’t afraid to spontaneously jam together, “cross pollinating” their styles and giving the crowd the sensation that they are witnessing the genesis of whole new genres. This ultra creative atmosphere means bands big and small bring their all to this 20+ year old festival. 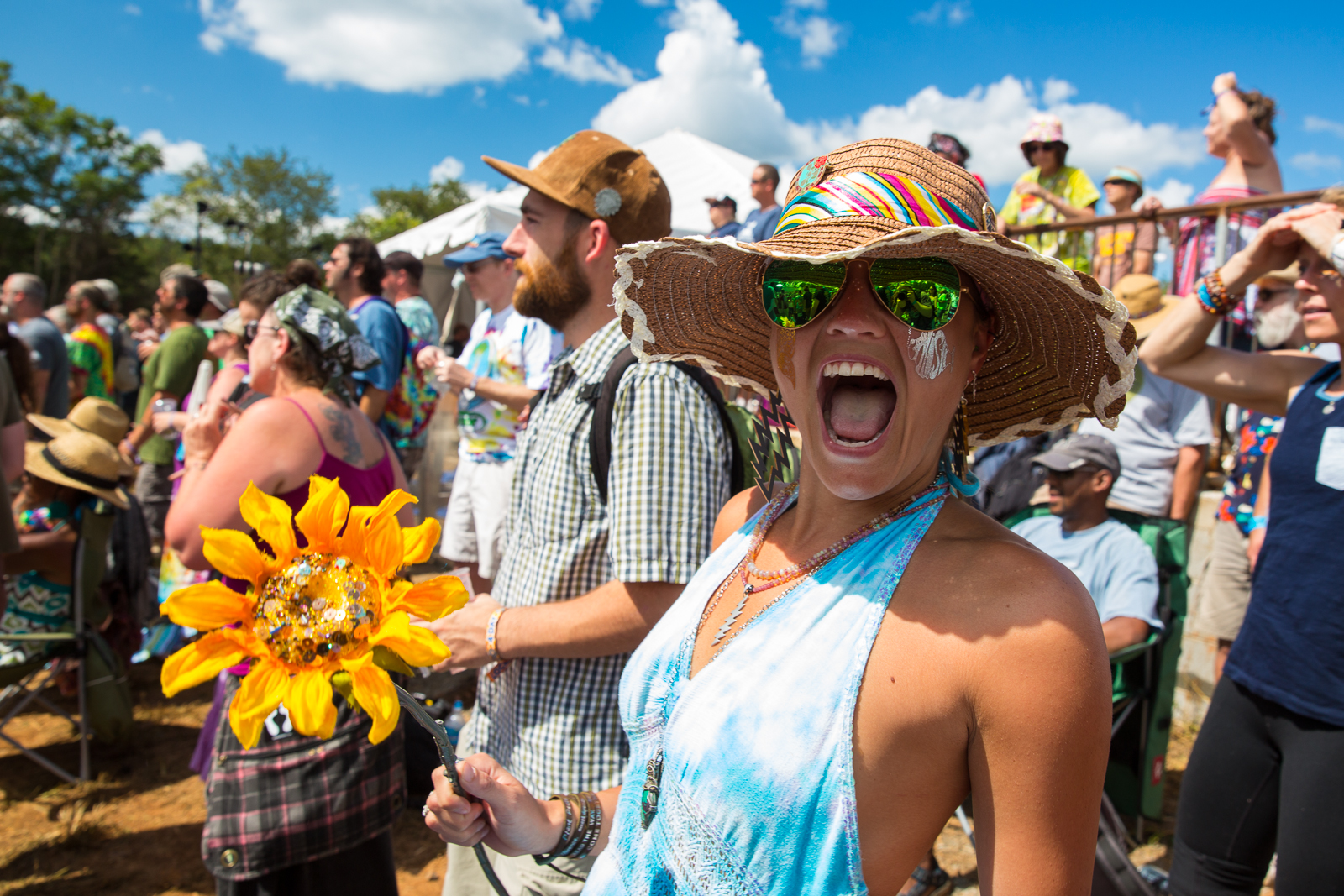 The very concept of jam band performances is woven into the name of this East Coast Festival, which is meant to signify the "interlocking" of audience members from all walks of life through a pure love of music. Lockn’ launched in 2013 when Dave Frey (who founded the H.O.R.D.E. Festival) and Peter Shapiro (who owned the legendary NYC rock club Wetlands Preserve) decided to create an event embodying this theme: “When something ends, another begins.”

True to the founders’ theme, there are just two main stages set up side by side, so fans never have to make a choice as to which artist they want to see. The music is uninterrupted, and the performances are indeed interlocking. Because of this jam bands have historically been all over Lockn's lineups, from Furthur, to Trey Anastasio Band, Gov't Mule, Widespread Panic featuring John Fogerty, The String Cheese Incident featuring Zac Brown, The Allman Brothers Band, The Black Crowes, and many more. 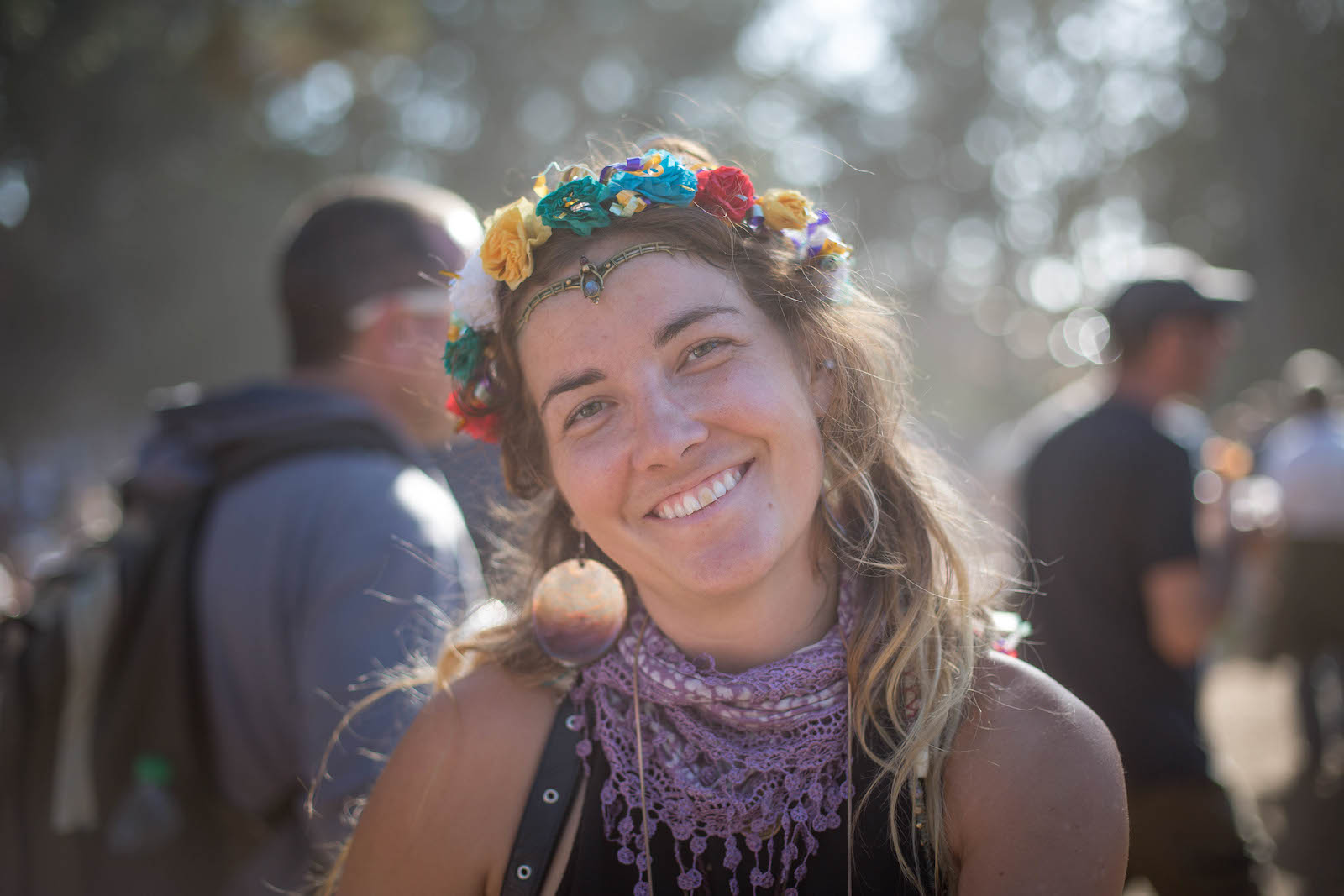 There's a strong connection between jam bands and folk festivals like Hardly Strictly Bluegrass Festival , with plenty of vibe drivers sprinkled throughout the 100-artist strong lineup for 2016. If a jam band can be distinguished by its hip-shaking, improvisational-ness, then previous genre-bending headliners Yonder Mountain String Band, Railroad Earth, Les Claypool Duo De Twang, String Cheese Incident fit the bill. (Fun fact: It was the inclusion of such non-bluegrass acts that led Hellman to add the “Hardly” to the title of the festival in 2004, and it’s been Hardly Strictly ever since). 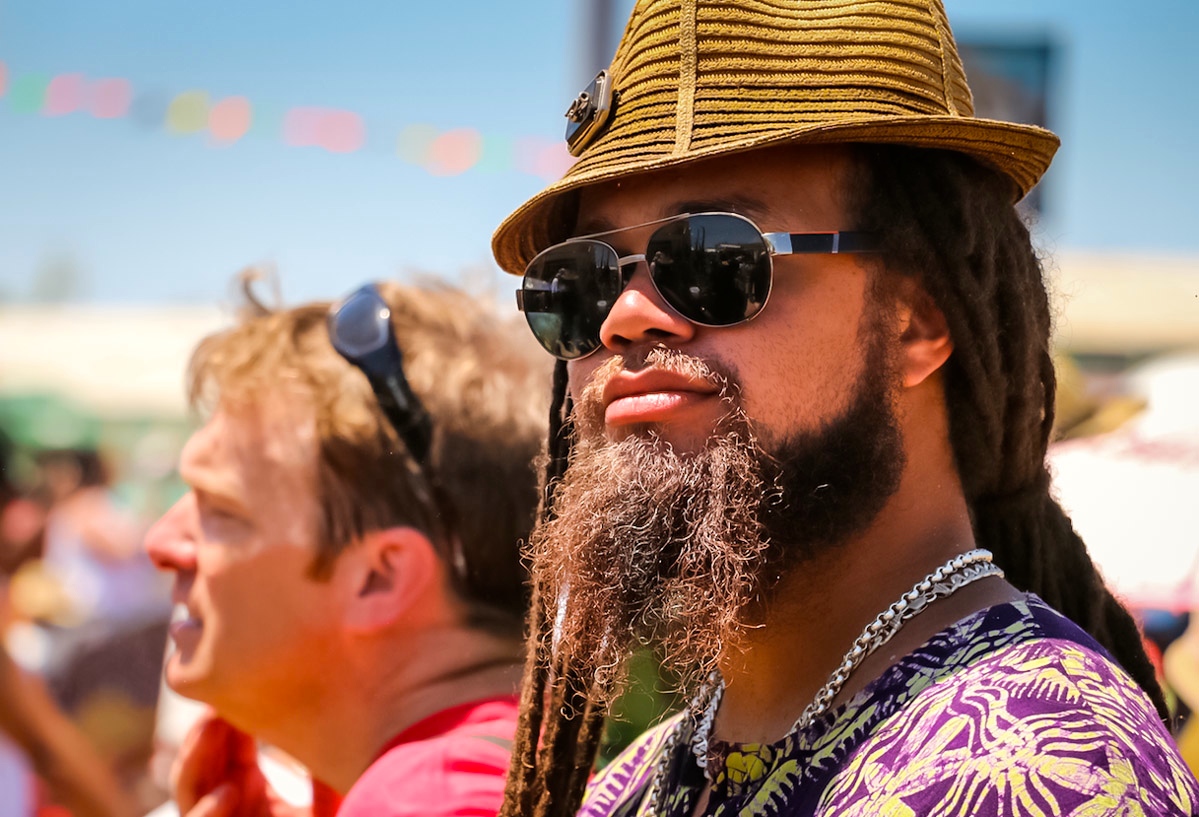 New Orleans Jazz Fest is slightly different than what comes to mind when you think "jam band festival," but the genre is well-repped in this happy and high-spirited atmosphere that celebrates of types of all music. Jazz gets all the glory, but the festival has evolved to include alternative and classic rockers for mainstream appeal, and jam bands for vibe appeal. In the past two years alone, the fest has been visited by jammers Galactic, My Morning Jacket, Gov't Mule, Widespread Panic and Béla Fleck, to name a few. From rockabilly renditions of Black Sabbath to jam sessions with local heroes Dragon Smoke, make sure you don't miss those nights in the back alleys of New Orleans after the festival grounds are closed - shows like that are often the most memorable.

For jam band festival-goers, Jam Cruise is a must. What else combines a five-day festival, three countries, and the stunning backdrop of the Gulf of Mexico into one constant party? Now in its fourteenth year, Jam Cruise has earned a reputation for its easygoing, happy-go-lucky atmosphere. In essence, it is a music lover’s ultimate carefree vacation. For more than a decade, it has provided its 3,000 attendees a welcome Caribbean respite from the January blues. The festival’s emphasis is on breaking down barriers and blurring the lines between kinds of music, allowing for a wide range of musical experimentation in the process – all against the backdrop of the Caribbean.

Once on board, there's no time to be bored. what with all the food to eat, the pool, spa, and casino. There's also a poker tournament, a door-decoration contest, autograph signings, game shows, yoga classes, educational workshops, and seminars featuring artists and special guests. And don't forget: There’s always the option of just chilling by the pool with a cocktail and a good book. Of course, the festival's ethos remains focused on the music. Most bands play two sets, so most festival-goers have the chance to enjoy acts to the fullest.

Founded by the Disco Biscuits in 1999 as a showcase for the band's wild jamtronica and its kin, this freewheeling gathering is an electronic wonderland where you can let your hair down and your freak flag fly.

The focus at Bisco is clear from the get-go: Party hard. The wild, weird electronic vibes are grounded by the main event which is staggered throughout the weekend: long, winding jam fusion sets from the Disco Biscuits at the Electric City main stage. The group is known for their trippy light shows and epic cover songs. Playing six sets throughout the weekend, they are truly the glue of this unique event and certainly not to be missed. Beyond the Biscuits' performances, a mix of DJs and live rock pepper the festival's annual lineups; in 2015, Pretty Lights, STS9, Kung Fu, Emancipator, Jauz, Flatbush Zombies, Slow Magic, Classixx, Of the Trees, Justin Jay, Lido, Party Favor, Trippy Turtle, Sweater Beats, Bassnectar, Reptar, and Modern Measure all took the stage to keep heads down dancing and the vibe level up.

Take a jam festival and add a little spooky Halloween flair, and you've got the wicked fun Suwannee Hulaween festival. The String Cheese Incident (who plays two sets each night) puts on the festival and always secures a big-name lineup of fellow jam bands and EDM artists to play, with funk, hip hop and reggae performers thrown in to keep things lively. Another reason Hula wins raves: it's a Halloween party, where bands and fest-goers alike show their spooky spirit with all-out costumes and decorations. Then there's Hulaween's perfect setting: it's outdoors under giant, moss-draped trees, with the occasional bat swooping by. It feels a little bit haunted and Southern Gothic, and a whole lot gorgeous and atmospheric.

Amidst an "everyone's welcome" kind of vibe, the crowd – a mix of young dance freaks, older jam fans and those in between – roams between the four stages: the Main Stage (where the String Cheese Incident plays, followed by headliners such as Chance the Rapper and Pretty Lights), the Amphitheater (another big venue hosting ass-kickers like Primus and Odesza), Spirit Lake (home to the art installations and silent disco, and where the late night party swings until 5 am or so) and the nearby Campground Stage (a terrific smaller spot presenting Florida-based bands). The lineup includes around 50 artists overall for enough noodling and dancing for everyone. 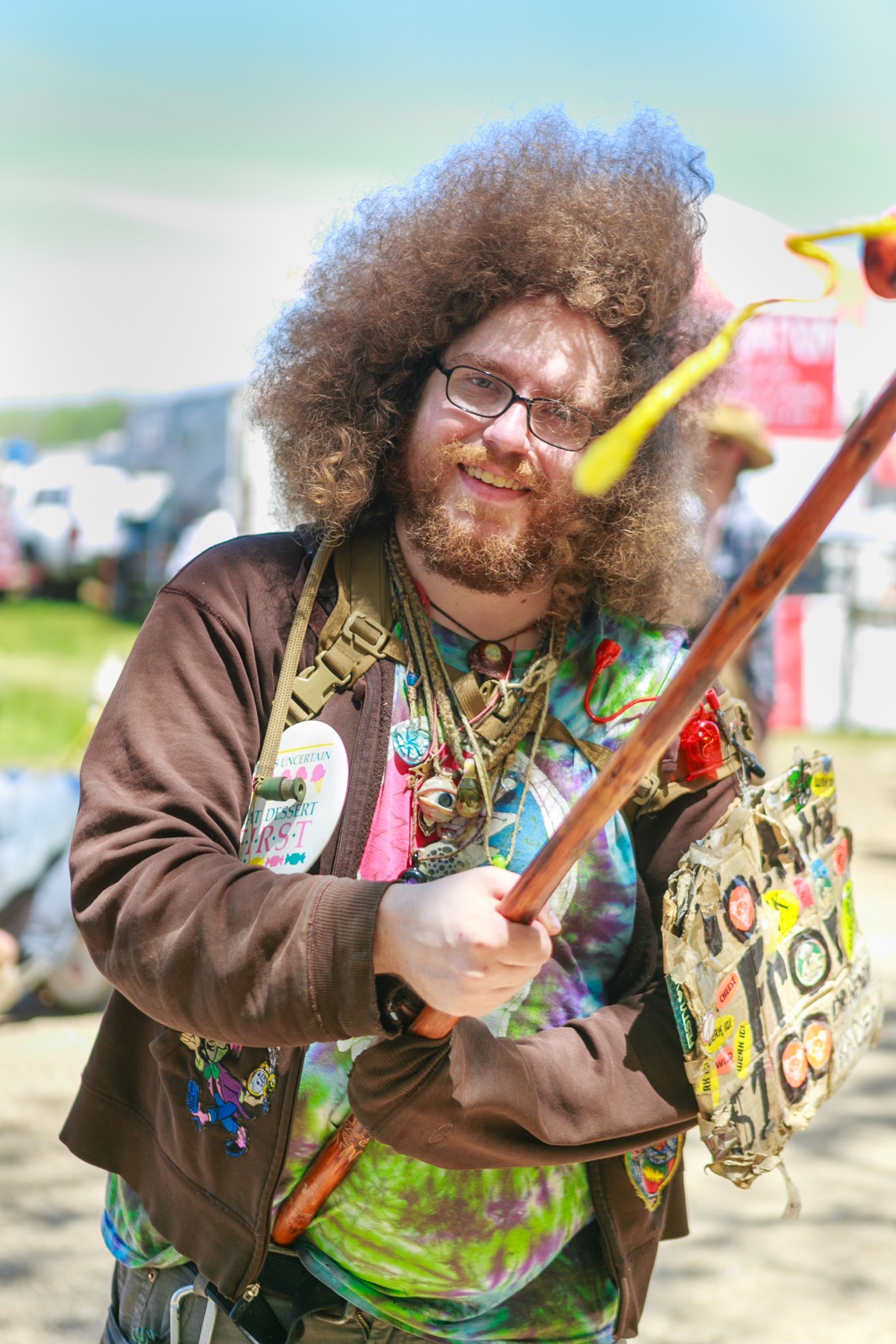 Summer Camp's producer Don Sullivan describes as his event as “one of the first jam band festivals,” predating Bonnaroo by a few years, which definitely earns Summer Camp a spot on this list. Inspired by a love of the Grateful Dead, Summer Camp Festival is an outgrowth of the successful Summer Sessions, a 1999 traveling tour launched by Jay Goldberg Events and Entertainment. The concerts included moe., Galactic, String Cheese Incident and Gov’t Mule, with shorter sets by Keller Williams and Gibb Droll. It made a stop at Three Sisters Park in Chillicothe, Illinois, and two years later, in June 2001, the first Summer Camp festival took place. It's been there ever since.

Over the years, the festival has expanded to include electronic dance music; however, you could easily spend the entire event listening to just jam bands or only EDM—or a check out a little bit of both, and then some. In the past 15 years, artists such as Flaming Lips, Medeski, Martin & Wood, The Roots, Widespread Panic, Willie Nelson, Les Claypool, G. Love and Special Sauce, the Avett Brothers and Andrew Bird have all graced its stages. Moe., Umphrey’s McGee and Keller Williams are festival mainstays, having appeared for many consecutive years—a testament to the convivial, family vibe.

Artists often sit in on each other’s sets at Summer Camp, as G. Love did with the Flaming Lips in 2008 and Avett Brothers in 2011, along with Bob Weir with Primus (2012). The grassroots nature of this fest pretty much guarantees you’re likely to see some artists before their careers take off—the ultimate discovery for fans. Umphrey’s McGee first appeared in 2003 and exploded on the national level shortly after Summer Camp, as did the Lumineers in 2012, among others. 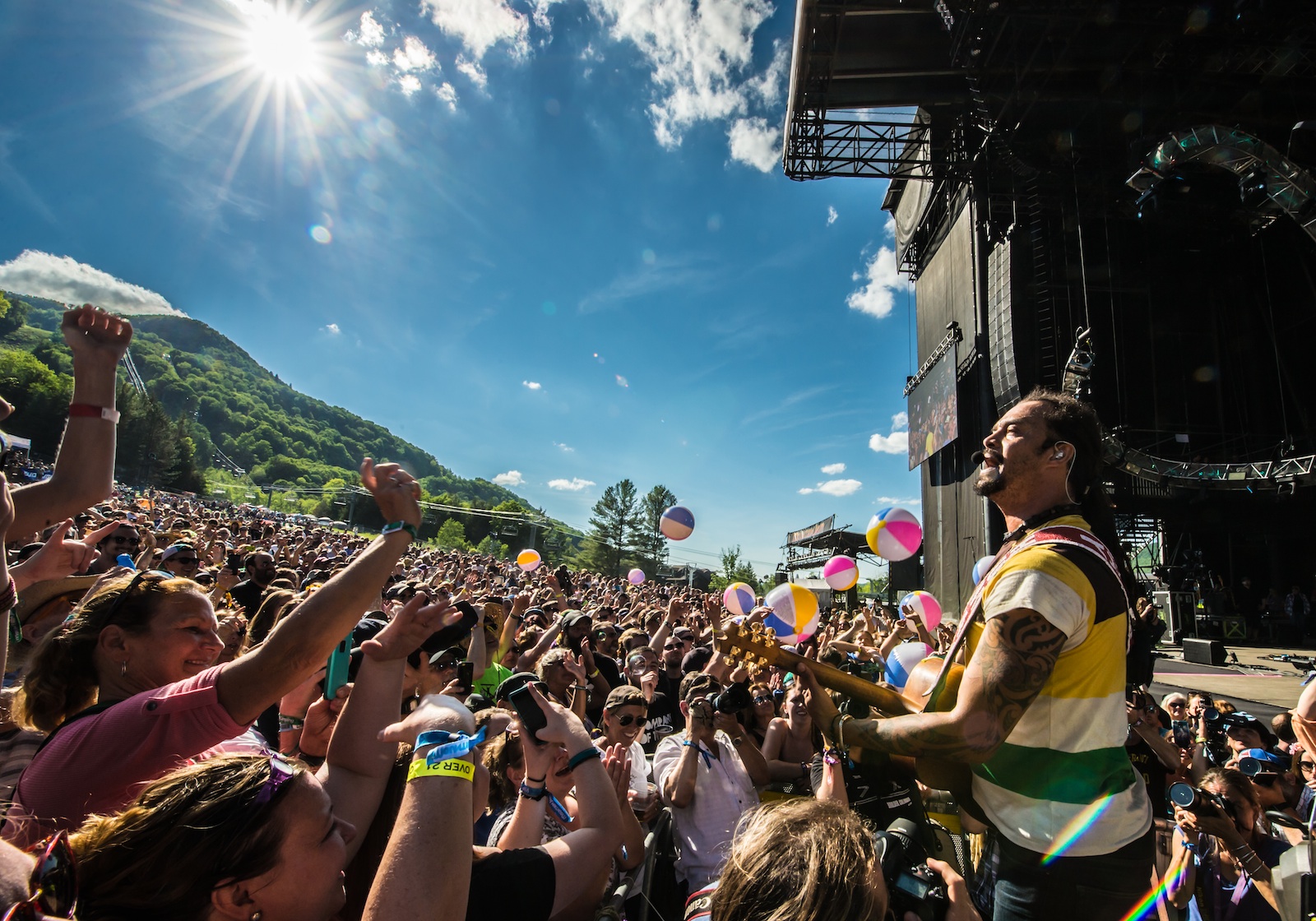 What began as a one-day, 3,000-person event in 2005 quickly swelled in upstate New York into the four-day extravaganza of jammy headliners as well as rock, jazz, blues, and reggae known as Mountain Jam festival. Inspired by Woodstock's 1994 iteration, founder Gary Chetkof (owner of Woodstock radio station WDST, which hosted the first Mountain Jam for its 25th anniversary) told Fest300: "The coolest part of the festival was the people. I was really taken by the attractions, the surreal feel, and the whole fun atmosphere.”

Although it now hosts hundreds of acts spanning many genres, this revered American music festival started out as a proving ground and treasure trove for jam bands and their freewheeling fans. Partly influenced by major festivals such as Glastonbury and similar American incarnations Coachella and Lollapalooza , the organizers of the first Bonnaroo wanted to fuse that scale with the warmth and grassroots enthusiasm of jam band circuit bands like Phish and the Dave Matthews Band. The resulting lineup paid off in a big way with the first staging in 2002 selling out in two weeks without the benefit of a traditional advertising blitz. Its lineups have diversified in recent years to become among the most anticipated of the summer, but the festival still pays tribute to its roots, most famously during its annual SuperJam, which sees star musicians from many genres get together on stage one night of the festival to jam on original, cover and improvisational tunes. Overall, the vibe of the festival remains the same as it was in its earliest days: untamed, free-spirited, and communal.