Vendors
Photo By: I Amsterdam

9 Festivals to Match Your Favorite Color

When you think about it, colors dominate our lives. Though the "science" of color is still a budding (but rapidly growing) field of study, there's no denying that colors have the power to make us feel emotions and influence us to make decisions on a daily basis. From birth, our society ascribes colors (pink or blue) to our genders. "Red" means stop, "green" means go. We choose foods based on what colors they are or what color their packaging is; we even paint the colors of our walls to improve our moods, and pick out clothes to wear each morning or evening to overtly reflect (or deflect) how we feel on the inside.

Just as we gravitate towards certain colors and adopt them as part of our identities, specific colors have come to symbolize entire festivals and their cultural significances. Your favorite color might be on this list; scroll on to see our favorite, über-colorful festivals from all around the world. 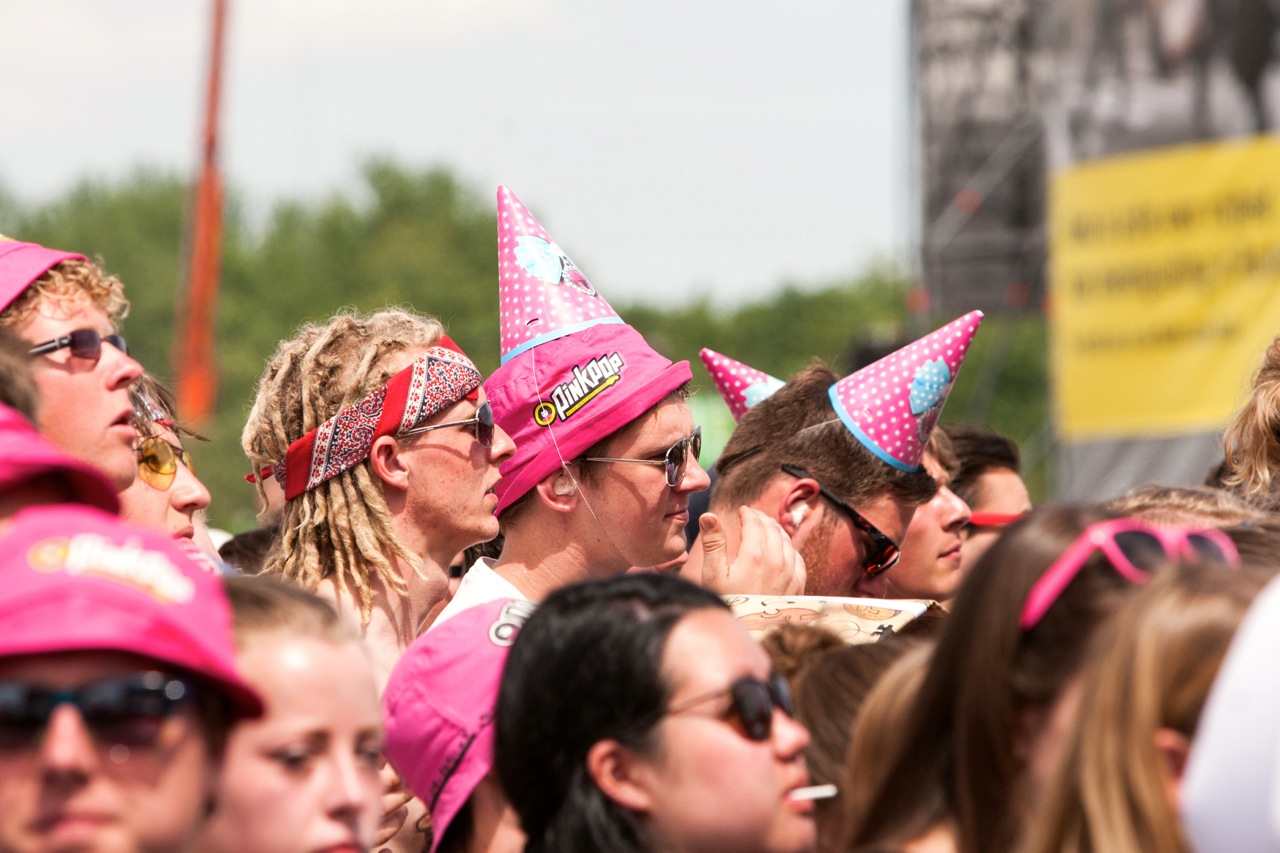 Speaking of pink, it's the namesake color of Europe's oldest annual rock festival, Pinkpop. The name comes from merging the Dutch word for Pentecost (Pinksteren) with "pop" for the music genre. Later the name morphed into another interpretation: "pink" for the color and "pop" for the Dutch word for doll, which is how the iconic dolly-in-a-pink-dress logo came about.

Screaming guitars and frantic, electric performances are the norm. If a band is in a groove, it'll keep playing for two hours or more. Bruce Springsteen holds the unofficial record, playing for close to three hours during one of his Pinkpop stints. In 1998 fans bouncing to Primus actually caused an earthquake measuring 1.3 on the Richter scale —but the overall vibe remains peaceful and chilled out.

It's a sea of pink out there. The European, 20-something fans get into the mood by dying their hair pink and wearing pink T-shirts and pink plastic glasses. Each year the fest sells an official Pinkpop hat, which heaps of people buy and put to inventive use. You'll see the floppy caps block sun, keep away rain, carry French fries and dry dishes, among other functions. 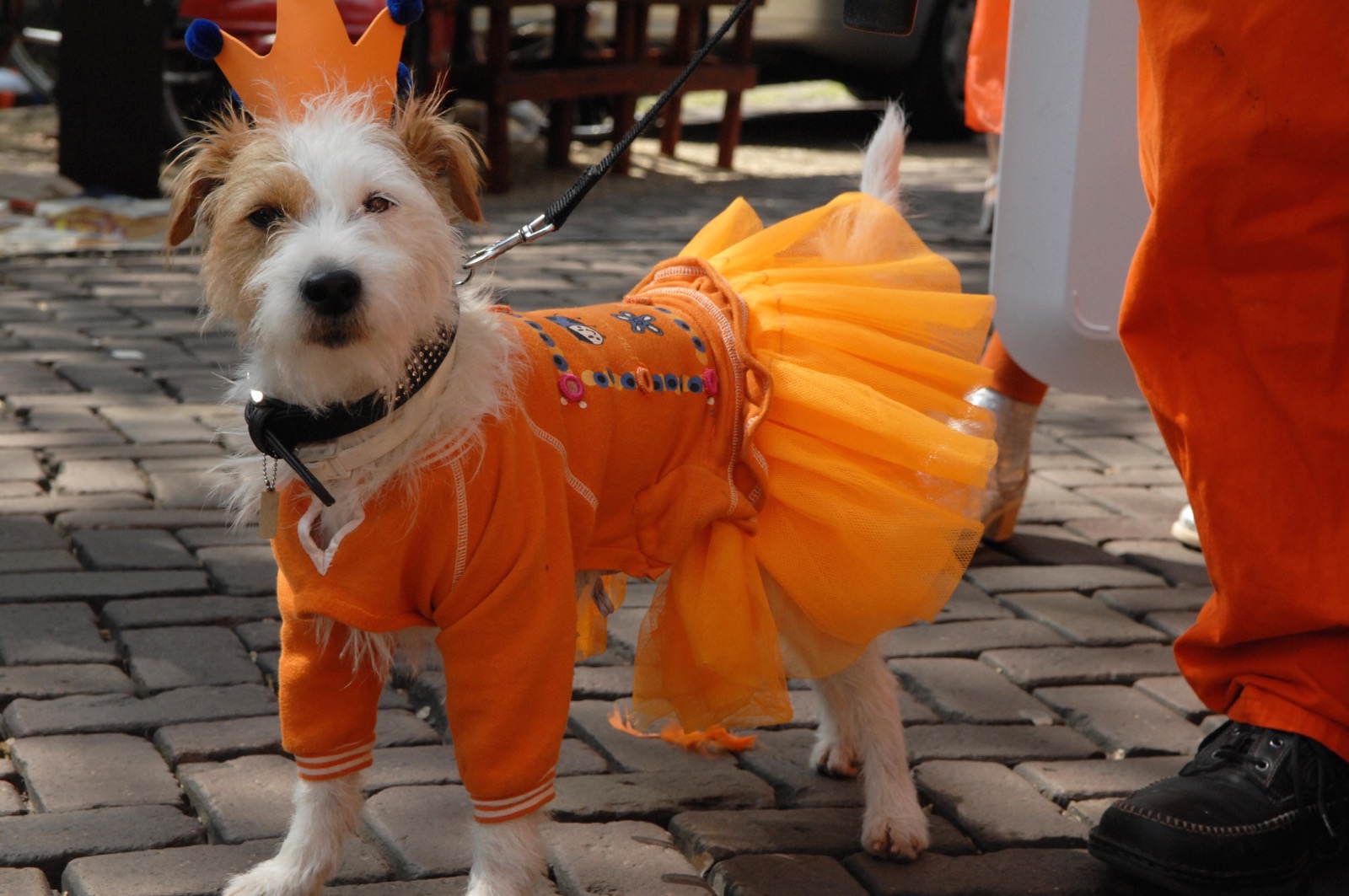 This is the ultimate springtime party, and orange is the official color of the occasion. The history goes like this: On April 30, 2013 Holland welcomed its first male monarch since 1890, King Willem-Alexander. This succession meant many changes for the festival of course, including the fact that what was formerly known as Queen's Day got a new name, a new date, and a new significance. Amsterdam is already a city known for its "anything goes" party vibe, but this annual event is the wildest 24 hours of the year. While the laws are more than tolerant the other 364 days, rules practically don't exist on this day as police are strictly forbidden to intervene in the festivities.

Why orange? The flag of the Netherlands is red, white and blue, but orange is the color of the royal family and most everyone embraces this bright, happy color, which is welcome after a long, gray winter. Even the flags are adorned with a mini­-flag of orange. If you forgot to bring something orange, there are street vendors everywhere for a chance to grab some festive clothes and blend right in. Wigs, dresses, tutus, boas and neckties — you guessed it, all orange! Fancy dress and costume revelers rejoice. It feels like Mardi Gras with dancing in the streets. 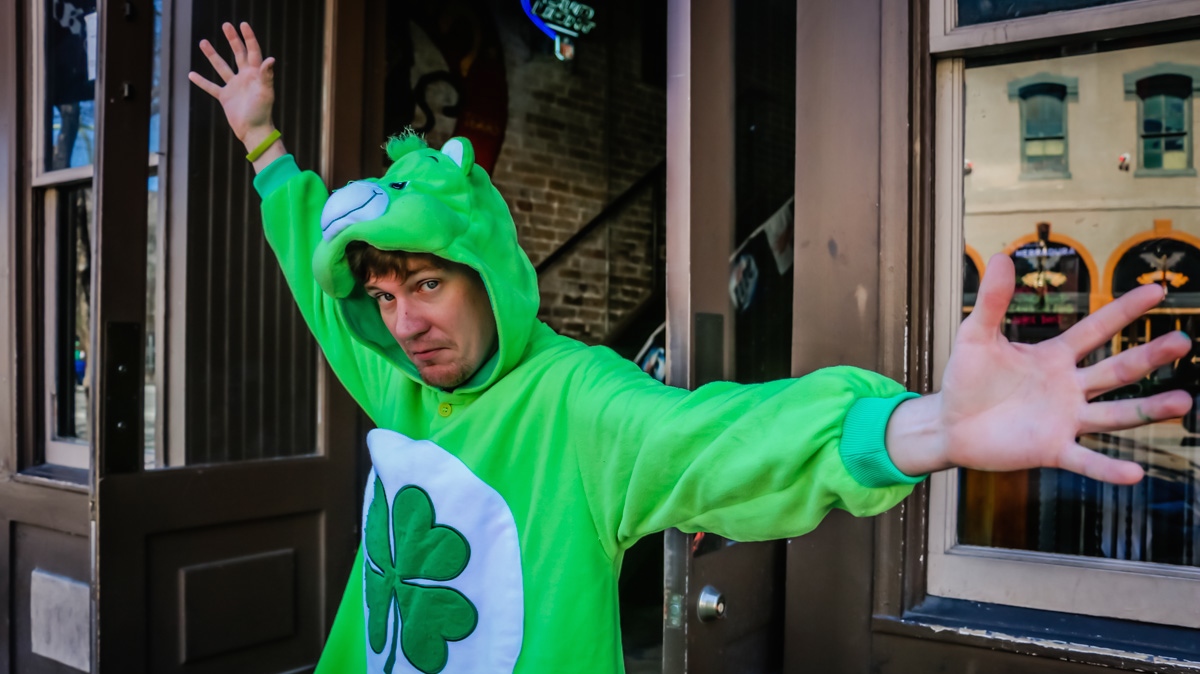 Green has long been the hue of Ireland, where St. Patrick's Day revelers believe wearing the color will make them invisible to pesky, mischievous leprechauns. March 17th (St. Patrick's Day) marks the day in circa 457 AD when Saint Patrick died and took his story to the grave. We know that Saint Patrick was born in England and was kidnapped from his home by Irish Raiders at the age of 16. After six years as a slave, God visited him in a dream and encouraged him to escape. With that divine vision, he broke free and returned to his English family in order to carry God’s mission back to Ireland. In addition to crediting Saint Patrick with the spreading of Christianity to the Irish pagans, ancient legend holds that he also drove all the snakes out of the entire nation. Old Irish folklore also tells us the Saint would use a three-leafed shamrock to explain the Holy Trinity—the Father, the Son and the Holy Ghost.

Truly the climax to the multi-day festival is the parade held on March 17th, where the million-strong, Guinness-fueled, green-clad revelers resemble a veritable army. The event is as much about participation as it is about spectacle. Few forego the tradition of adorning all green, or pounding Guinness – and neither should you. 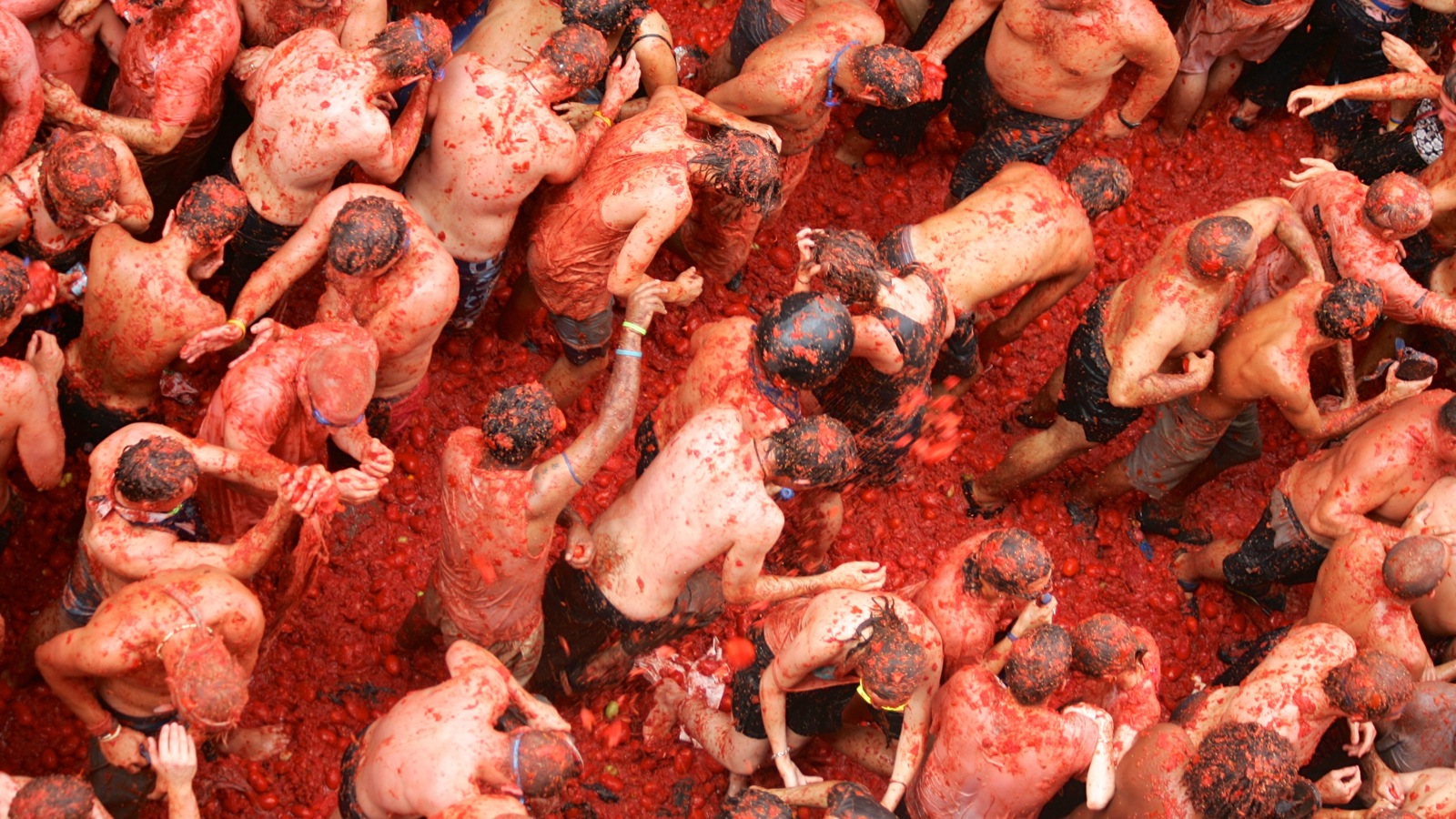 While red isn't the official color of Spain's La Tomatina, it may as well be, as tomatoes are the official mascot of the annual, bizarre event. Curiously, no one really knows who cast that first, fateful tomato that started the La Tomatina revolution. According to the most popular version of the story, during the 1945 festival of Los Gigantes (a giant paper mâché puppet parade), locals were looking to stage a brawl to get some attention. They happened upon a vegetable cart nearby and starting hurling ripe tomatoes. Innocent onlookers got involved until the scene escalated into a massive melee of flying fruit. The instigators had to repay the tomato vendors, but that didn’t stop the recurrence of more tomato fights – and the birth of a new tradition.

The aftermath is one horrific cleanup. All around, you’ll see fire trucks spraying the streets clean and white walls and t-shirts splattered with what resembles part New Age artwork, part battlefield massacre. People head over to the makeshift showers set up for the occasion to clean off tomato juice, skin, and seed from every crevice of their bodies, from their ears to their belly buttons. 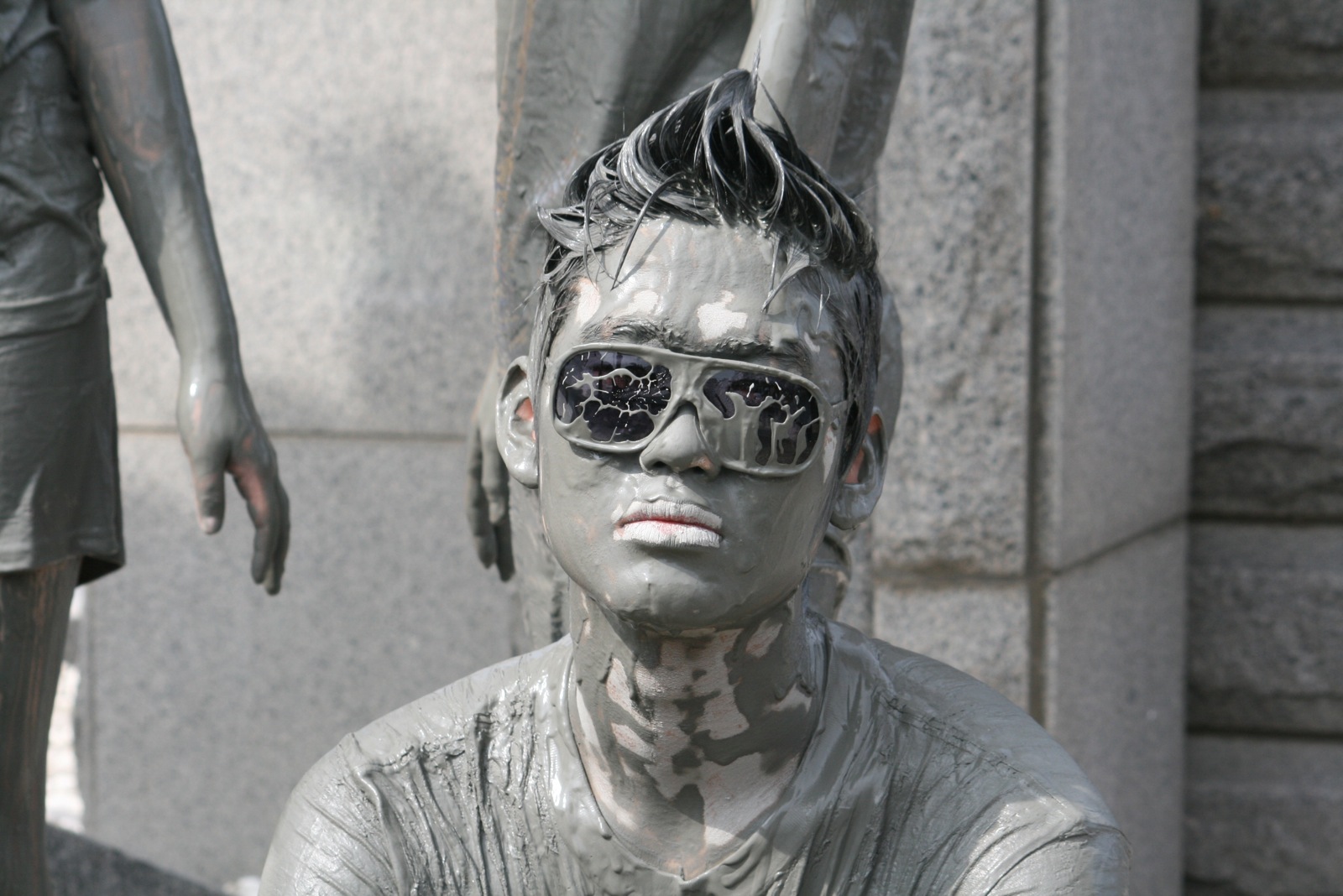 Beauty product for some, excuse to channel their inner child for others, Boryeong Mud means many things to many people. But no matter what, all you see is thousands of grey, mud-covered bodies everywhere you look. This filthy festival involves wrestling, sliding, massages, and photo contests. Getting dirty – and grey – has never been so much fun. The idea for the festival began in 1998 as a promotion for the mineral-rich mud found near Boryeong. When the manufacturers of Boryeong Mud products determined the beneficial effects of the local grey stuff, they invited visitors to slather themselves in the stuff. The event took on a life of its own rather quickly, attracting thousands of visitors to this otherwise sleepy town annually for the beach, the warm weather, and, of course, the mud.

Pop and hip-hop performers from around the world affirm its status as an international event, providing an eclectic soundtrack to the wet and wild madness. Don’t miss the huge global rave on the evening of the closing ceremonies nor Friday’s Korean b-boy show. Keep your eye out for opening- and closing-night fireworks, as well as parades and other cultural performances during the week. 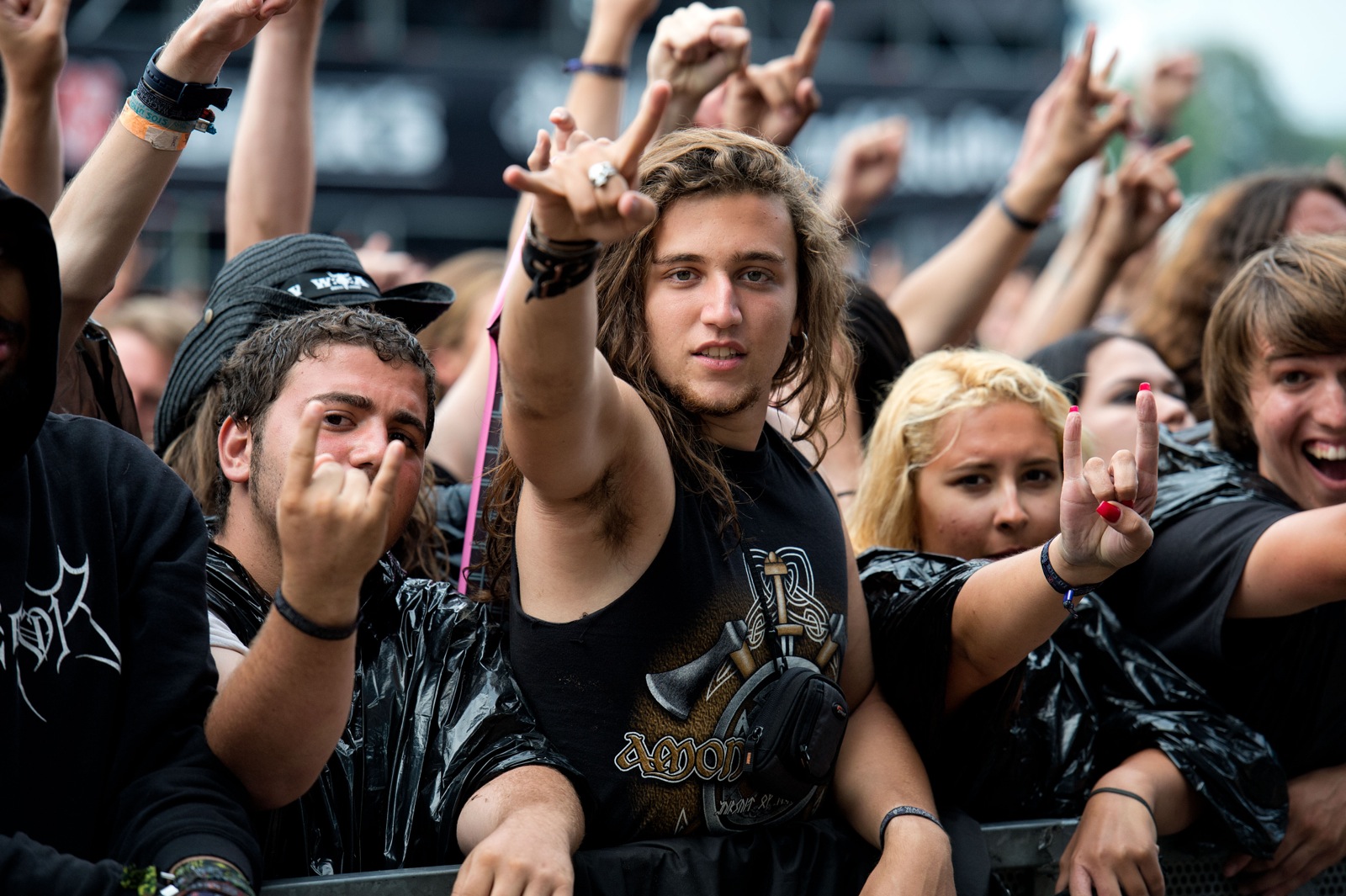 Let's face it: at a massive, venerable metal fest like Wacken, black is the color to rule them all. Most of the year Wacken is a cow-dotted hamlet of church-going farmers, with a population of 1,900. But for a few days each summer it morphs into something far different, when 75,000 uber-tattooed visitors arrive, flashing devil's horns and going wild at the planet's premier metal fest. They come by car, bus and RV, clad in black t-shirts, spiked wristbands and heavy eyeliner, pumped to be among like-minded headbangers. The villagers are totally welcoming, even though they're not particular fans of black metal, death metal, nu metal and gothic metal. Hell, there's even a stage known as the Black Stage, which serves as one of the largest, most mosh-pit heavy at the festival. 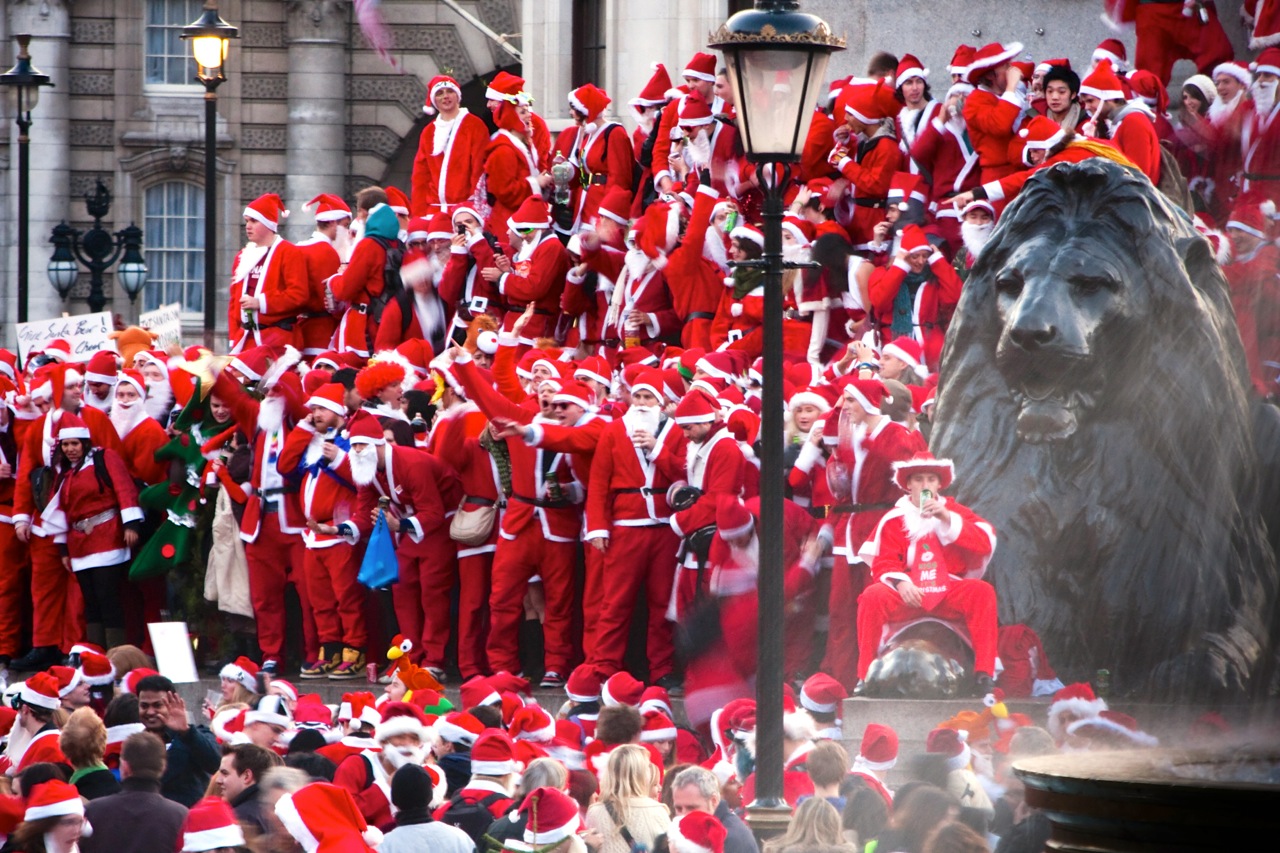 This one's a no-brainer. Every holiday season since the 90's, a crimson tide of drunken Santas invades cities across dozens of countries each holiday season – the biggest one sweeping through San Francisco. Begun in San Francisco in 1994, the first SantaCon (called “Santarchy” at the time) was sponsored by The San Francisco Cacophony Society, with inspiration from a Mother Jones article about a Danish political group that dressed in Santa costumes and mobbed a Copenhagen department store.

That one night of Kringle chaos has grown to an ongoing December party in 311 locations in 42 countries. Across the world, from San Francisco to Montreal to New York City, SantaCon crosses the Atlantic to hit London, Paris and Hamburg, before continuing on to Beijing, Tokyo and Sydney. In 2007, more than 13,000 Santas set a Guinness World Record in Ireland. If you get to hang out with a crowd that’s bigger, write to us. 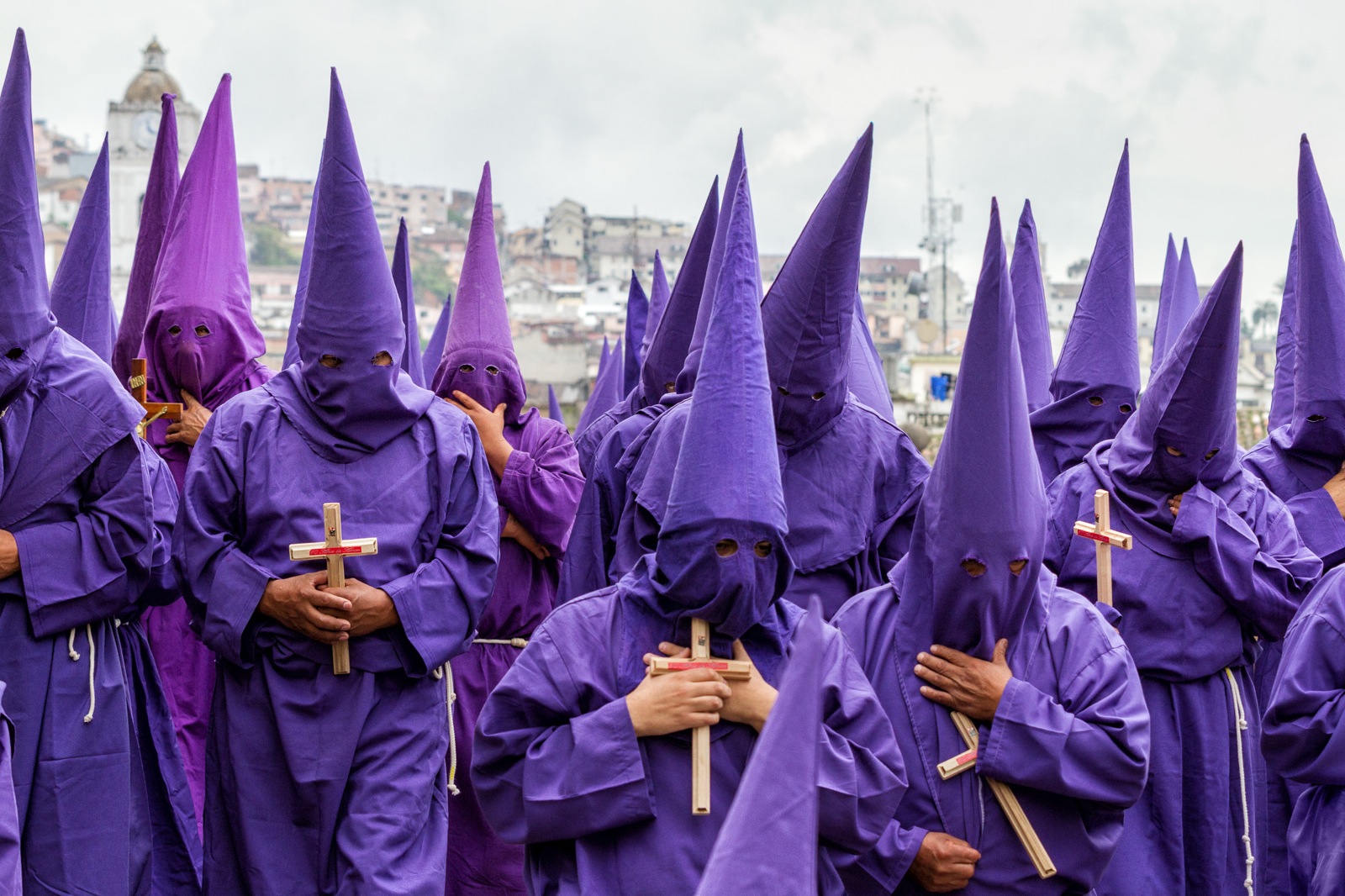 You don’t have to be religious to experience Semana Santa. The Holy Week leading up to Easter casts a violet-colored veil over Antigua, Guatemala, celebrating the transformation, Passion and resurrection of Jesus Christ. From the elaborately made carpets to the float processions, Semana Santa will make a believer out of you, even if it’s only in the magic of festivals.

The three main activities of Antigua’s Semana Santa are the processions of floats and horses (procesiones), carpet-making (alfombras), and candlelight vigils (vigilias). The theme of the processions is The Passion, or the last days of Jesus’ life. Floats depicting Christ carrying the cross are carried by hundreds of purple-robed men called cucuruchos. The purple represents penitence, and the entire procession is a symbol of collective sorrow for their sins. Many wear pointy purple hats with two small eyeholes, a strange yet iconic image of the celebration.

The original gay pride flew for the first time at the San Francisco Gay Freedom Day Parade on June 25, 1978. That iconic rainbow has since spread the world over to represent the diversity and inclusivity of the global LGBT community. Each color has its own significance. Today, San Francisco's Pride parade, the biggest in the U.S., is truly an eye-popping sea of colors to reflect that beacon of hope, the rainbow flag. It's a city-wide, raging party where anything goes, and the name of the game is to celebrate gender rights, marriage equality, and freedom – which means outfits get pretty damn wild. And the color pink is also of monumental meaning here; on Pink Saturday, an enormous upside-down pink triangle is unveiled and sits atop Twin Peaks as a way to unite the city during Pride Weekend and symbolize man's inhumanity to man.