The old Burning Man adage “It was better next year’ will be truer than ever for 2016. Burning Man recently announced the recipients of the 2016 Black Rock City Honoraria art grants, providing additional funding to the most dazzling and dynamic art projects in the works for this year’s playa event. Burning Man Arts is funding BRC art to the tune of $1.2 million this year, including these Honoraria recipients, as well as the sculptures, the bell towers, and the 33 Guild Workshops in the Piazza around the Man – all of which best bring the Da Vinci’s Workshop theme to life. We chased down a few of these artists to get a sneak peek at their grand plans for Burning Man 2016 art wizardry, and have previews of their impressive projects below. 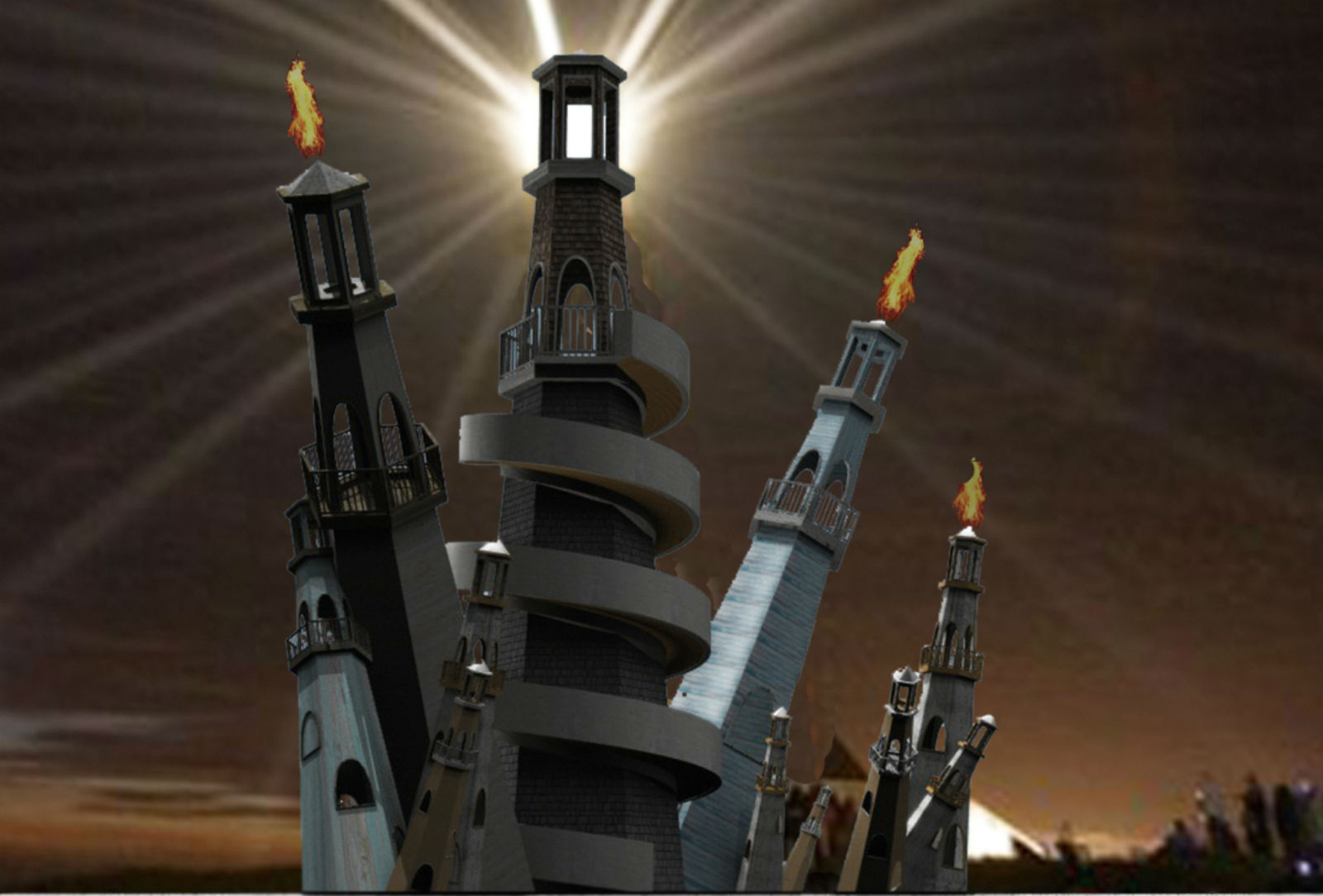 Your Burner beacon for those dark, dusty nights, the Black Rock Lighthouse will serve to guide your path from afar and as a rope-laden, climby jungle gym when you’re up close. A set of “leaning tower” lighthouses that, of course, shoot actual flames, the Black Rock Lighthouse also provides suspended bridges, ropes and ladders to improve your perspective on the playa. 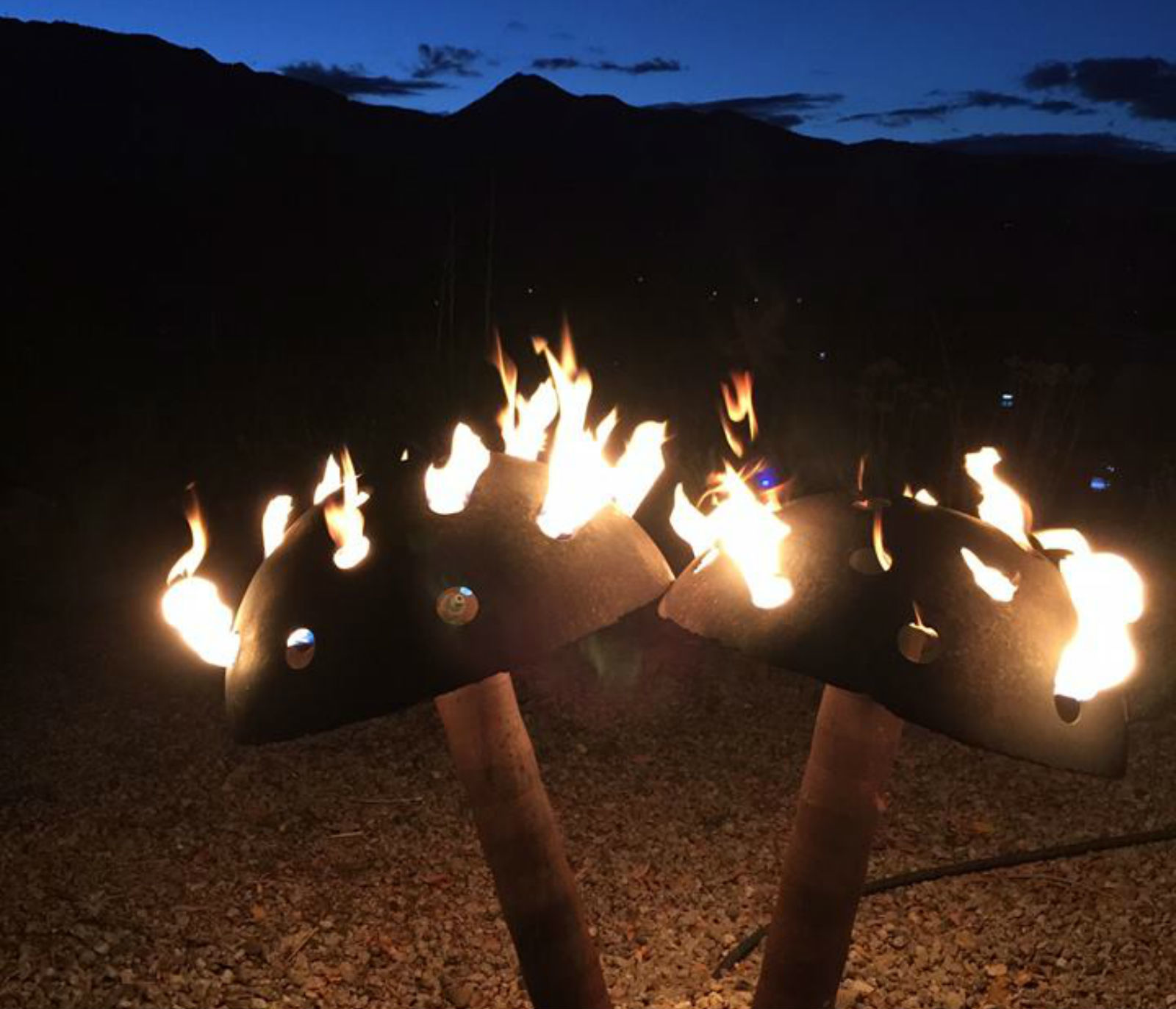 Flowers and plants that shoot flames? Flowers and plants that shoot flames. “These art pieces are beautiful and pragmatic,” the Burntanical Garden creators tell us of their plans for the playa in 2016. “They can take the place of a mass-produced Costco patio heater or a Home Depot propane fire pit in your backyard.” Those "illumishrooms" above will not be part of this year’s garden, but this year will see flowers whose petals are formed by fire.

Though the above video was shot in the default world, it should give you a good sense of what mad scientist sculptor Michael Gard has in mind for his aerial project Dreams of Flight. Helium balloons will allow his sculpted figures to wander the skies for at least two hours every night at Burning Man 2016. “I’ll probably fly them longer,” Gard tells us. “Because it’s pretty darned fun.” 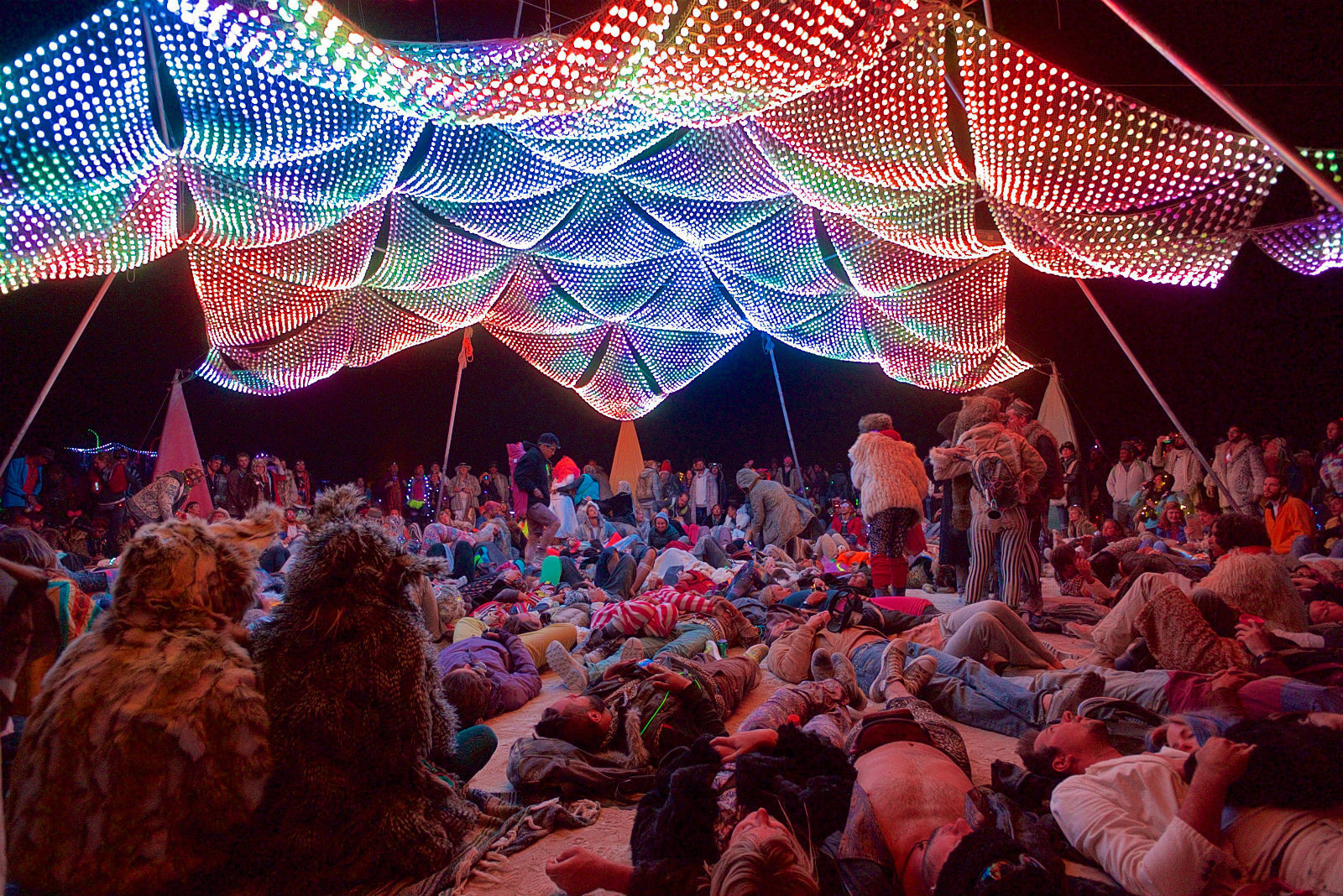 Your favorite outdoor chill zone at Burning Man 2016 figures to be Firmament by LED art maestro Christopher Schardt. “I was very surprised [about] just how many people were always there, carpeting the playa with themselves,” Schardt told us of Firmanent’s previous trips to the playa. “It really taught me that the best playa art pieces are actually places.” 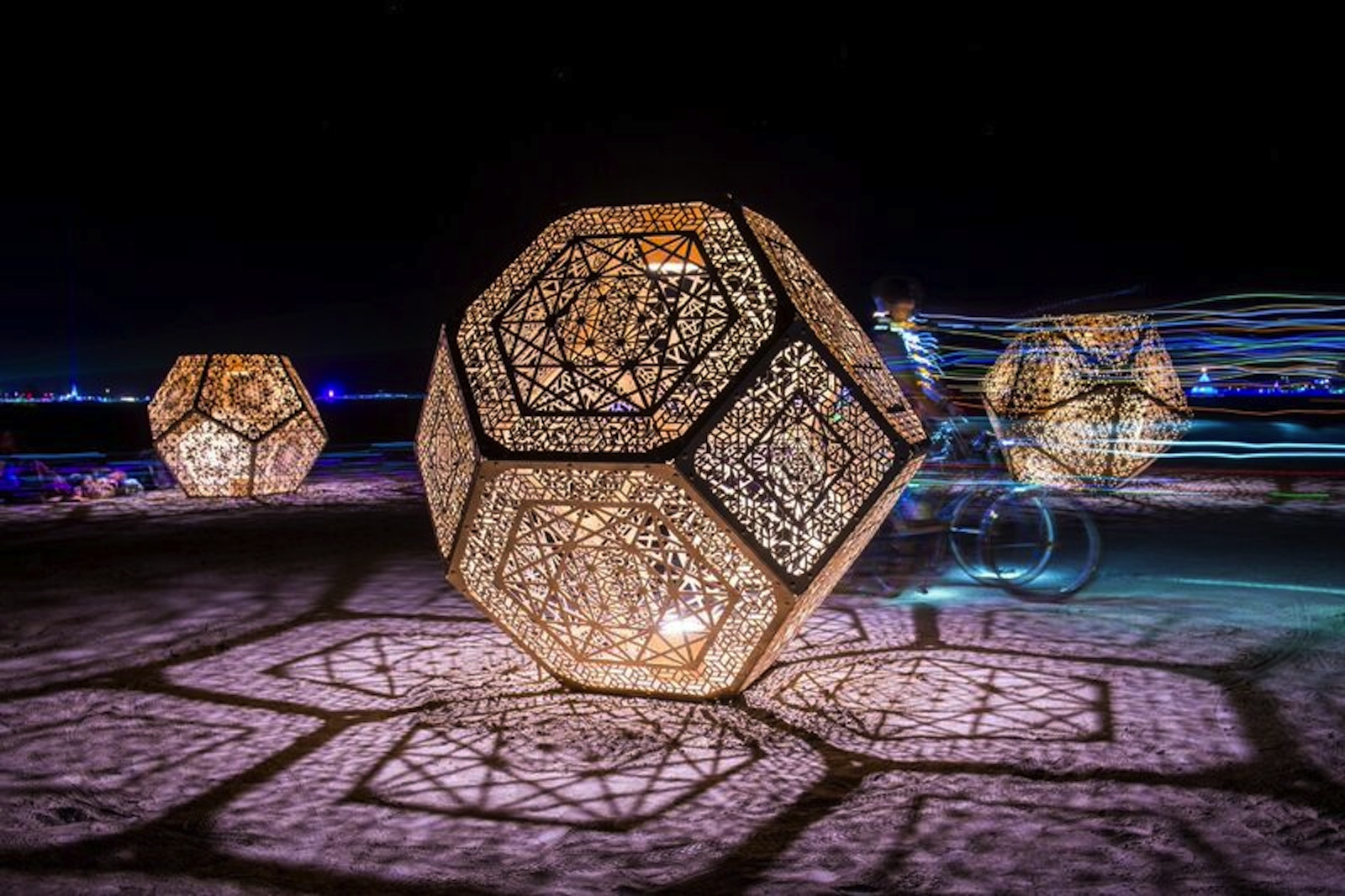 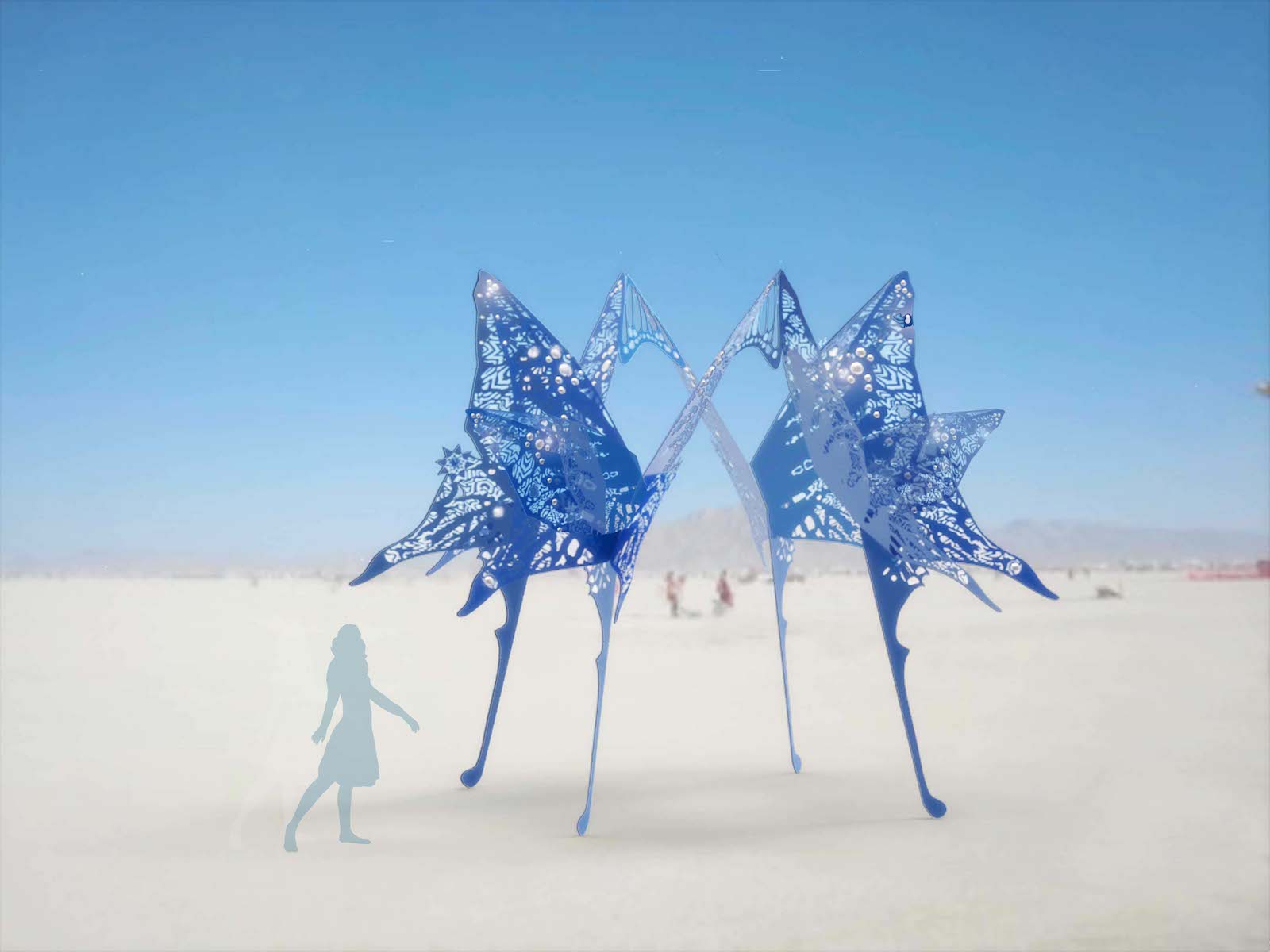 Previous playa visitors are no strangers to the work of Kirsten Berg, who will bring her butterfly-inspired sculpture Imago to Burning Man 2016. Ms. Berg compares butterfly development to our human experience at Burning Man. “First,” she said, “intense, energetic preparations, followed by the complete suspension of daily life and structure, to [immersion] in a space that is held, yet undefined, and full of potential; a cocoon of the imagination. Finally we emerge, flying on the wings of imagination.” 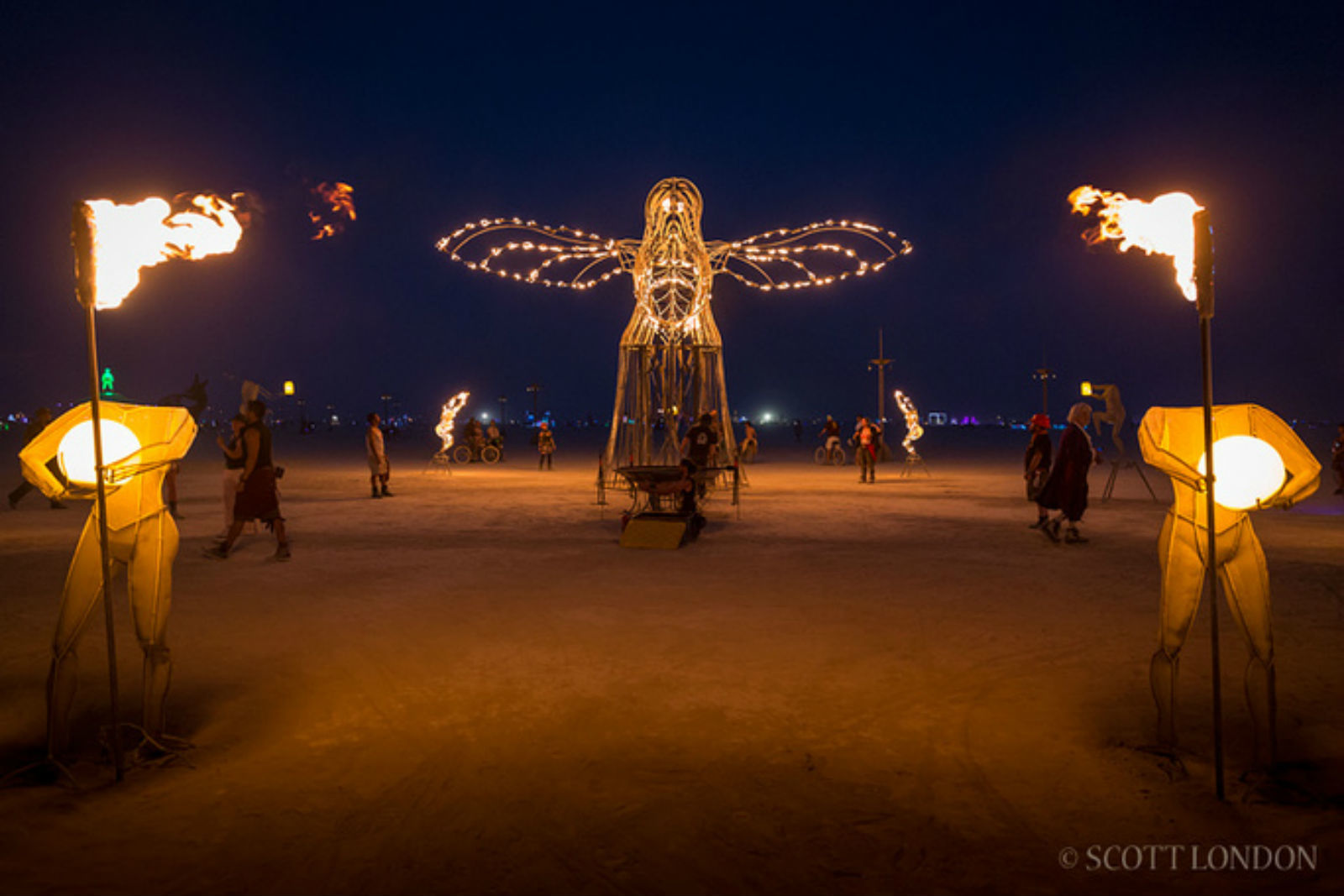 A photo of Iron Monkeys' work from Burning Man 2013. Photo by: Scott London

Burning Man 2016 will be the tenth anniversary for the Iron Monkeys blacksmith collective, and in celebration they plan to create Piazza di Ferro as a fully functioning blacksmith shop. “The shop will be participatory with both hot and cold metalworking opportunities,” Iron Monkey Kay Morrison told us. “And we are currently scheming some human or bike powered tools (hammer, tumbler, grinder) to provide even more ways to get involved.” 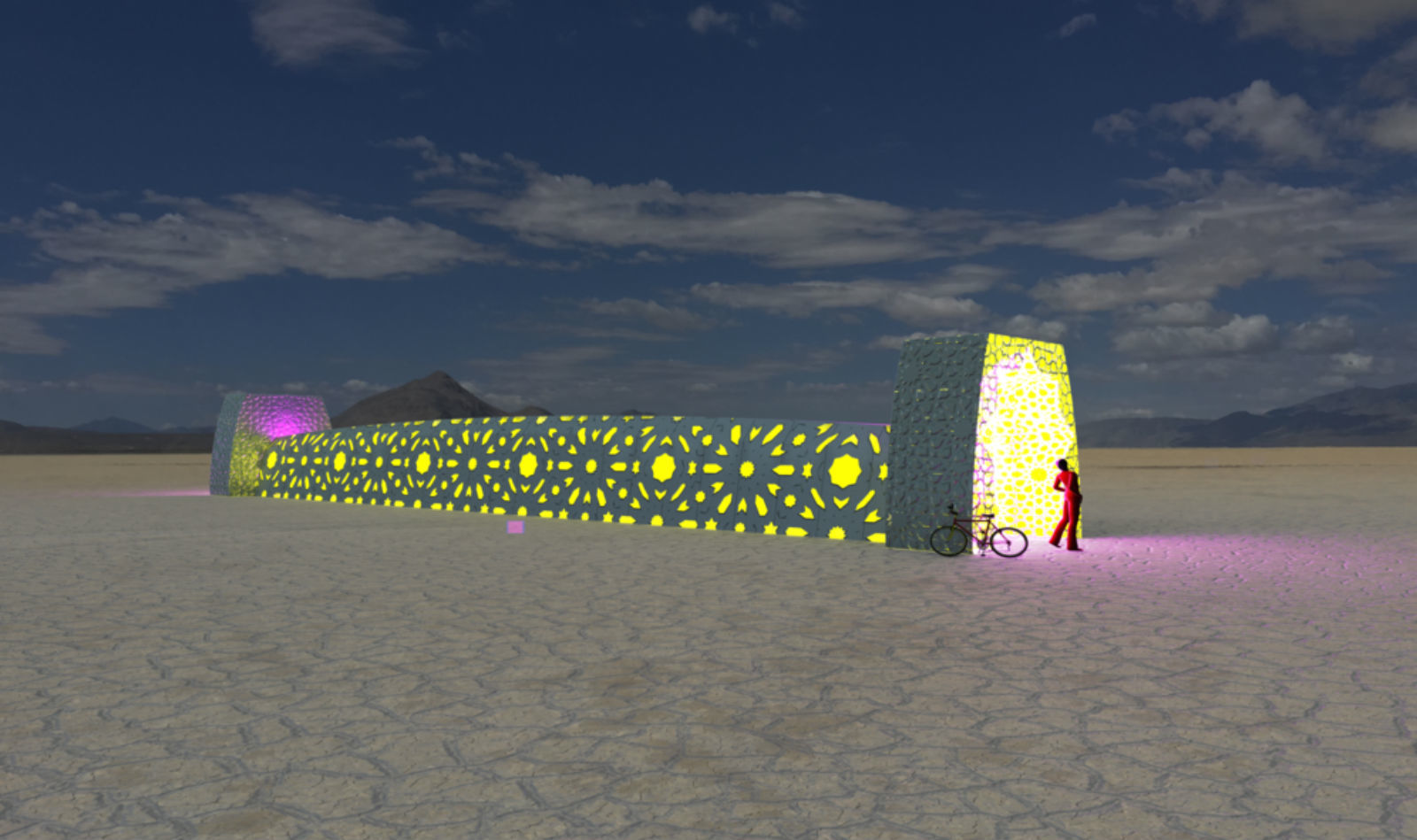 Roshanai is Farsi for “illuminate,” and this installation entitled Roshanai promises to live up to the literal translation of its name. The artists plan to work such LED magic that Roshanai will glow just as colorfully during the daytime as it will at night. After Burning Man 2016 concludes, creators Charles Gadeken and Sara Peyrot hope to purchase land in the Nevada desert on which to install Roshanai permanently. 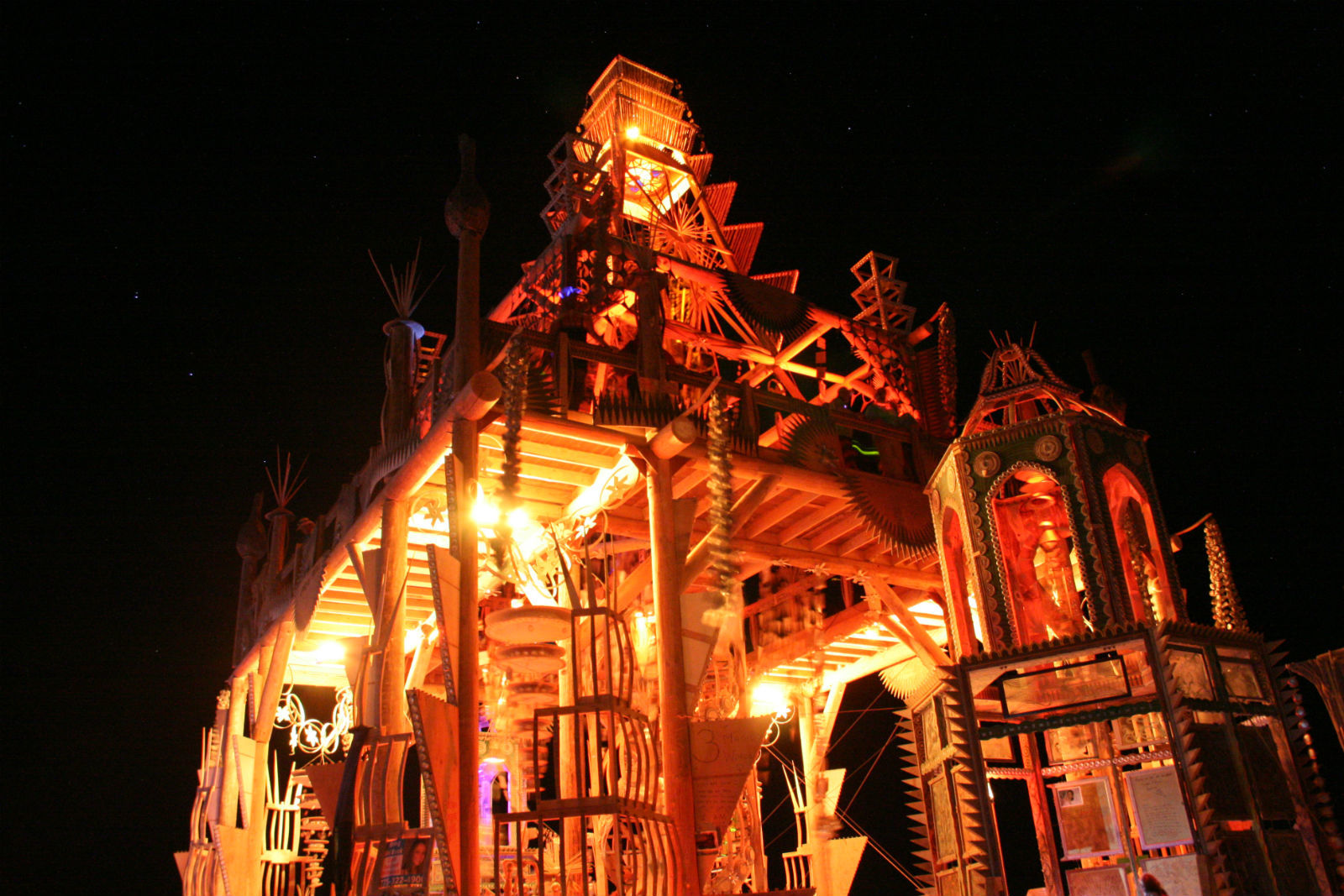 No discussion of Burning Man art would be complete without mentioning The Temple, Burning Man’s iconic annual memorial. David Best and his crew return for the 2016 Temple, ensuring this emotionally powerful, intricately jigsawed structure will be a can’t-miss on the Playa. And as with every year, you know how things will end for the Temple.

This is just a small sampling of 60 art projects receiving Burning Man Honoraria grants in 2016. Though there are too many to include here, honorable mention goes to additional projects such as Douglas Ruuska’s Mechanica Musica, which will allow you to step inside and create musical compositions; Mike Rosenthal’s Traveling Sound Museum, which provides an aural trip through musical history; and Mark Melnick's Rube Awakening – Magic Bike Rack Transformation Station, which provides a most handy bicycle rack.