A Women's Safe Space is a Good Idea for Any Festival

We all want festivals to be utopian. In these spaces, we do our best to create environments where we can express ourselves freely and go wild. As Stacy Forrester, the harm reduction manager at Bass Coast, puts it, “we are building (literally) an environment that reflects values we feel the greater society has maybe lost sight of – or that we wish were more present in our daily lives.” But unfortunately, there are times when things don’t go perfectly.

Maybe some folks don’t know, or maybe prefer to think incidents against women don’t happen at festivals. If you take a bunch of people to a remote location, remove some clothing and add in partying, you can get a bitter sip or two. Or maybe a woman has come to the festival with some discord in her personal life and it flares up: an ex-boyfriend camping nearby or a controlling partner trying to keep tabs on her every move. There are many incredible men out there. Men who are respectful, kind, considerate and strong. But there are some who, perhaps especially when under the influence in a party setting, don’t treat others with respect. It’s a reality we have to be aware of, and it's necessary that the festival community takes its harm reduction efforts further to create physical and psychological Safe Spaces for any woman who needs them. 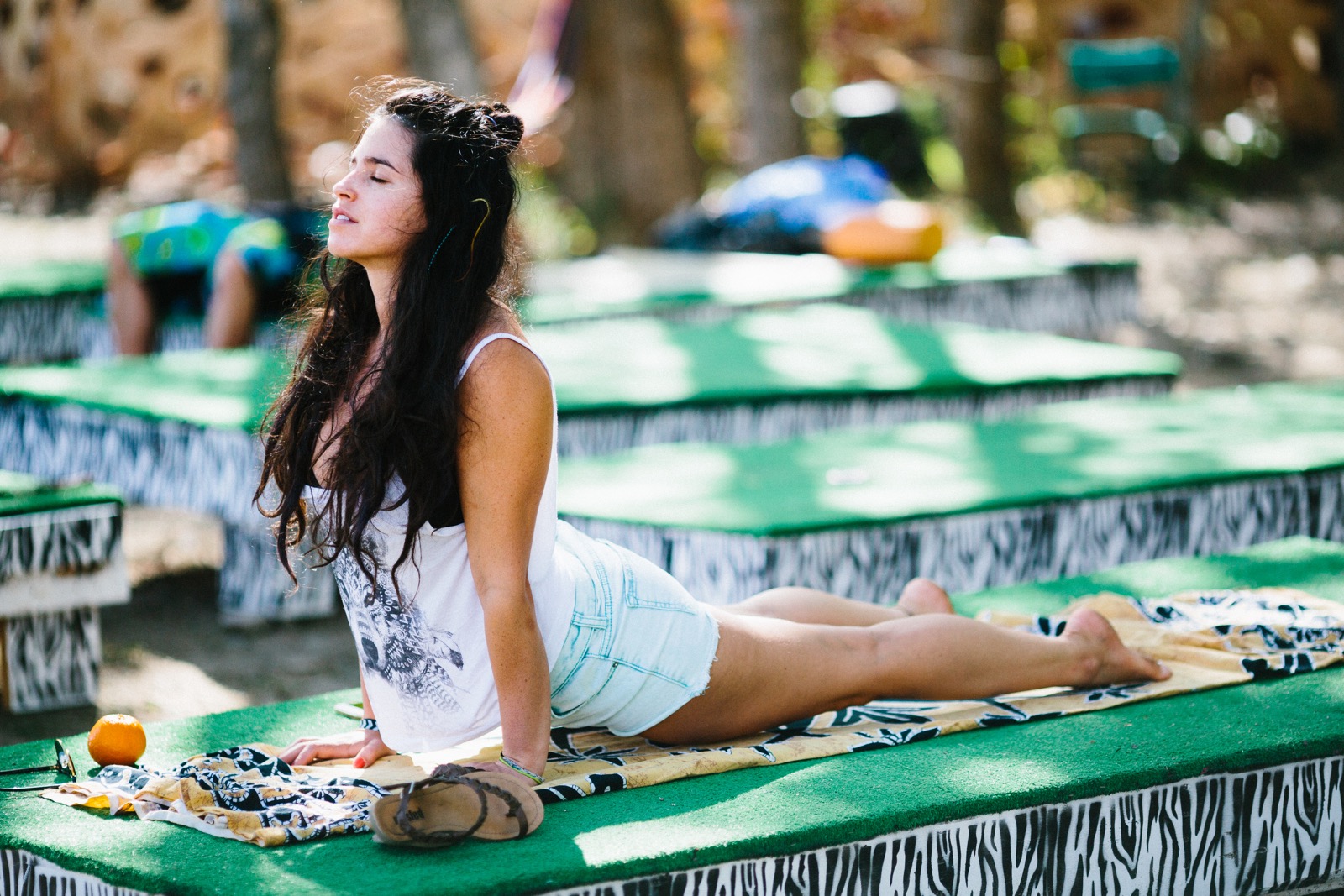 An attendee at Bass Coast. Photo by: Patrick Latter

Luckily, there are a few festival organizers taking charge. A discussion started about five years ago when a group of volunteers for Canada's Shambhala Music Festival became aware that there were incidents of aggression and verbal/physical violence toward females in the festival world. They started a weekly meeting to talk about what to do in response. Shambhala was already a leader in festival safety with their Sanctuary, which welcomes attendees of any gender seeking refuge from partying too hard. But what the festival did next is incredible. They created a Women’s Safe Space, which they define as “a safe place for self-identified women in need of non-judgmental support or a comfy space away from other festival-goers.” To let ladies know they have a safe haven if things get rough was an amazing innovation.

And festivals like Shambhala aren’t the only ones talking. There is a growing awareness, thanks to everyone from Beyoncé to Lena Dunham to Malala Yusafzai, of how differently women experience the world from men. Organizations like Good Night Out are popping up. Good Night Out, based in the UK, is “an independent campaign and global network dedicated to ending harassment on nights out. We train staff at clubs, bars, pubs and venues on how to deal with and prevent sexual harassment of women and LGBT+ and create a safer environment for their punters.”

An attendee at Shambhala Music Festival. Photo by: Xavier Photography

Slowly but surely, women's empowerment and equality is becoming a global mainstream issue. The United Nations has UN Women, an organization “dedicated to gender equality and the empowerment of women” that recently launched the HeForShe campaign, which encourages everyone to make the commitment to become an advocate. Together, we can cultivate the power to create global gender equality.

Creating places within the festival world for that power to grow is crucial. Picking up on the movement in 2016 is Electric Forest Festival in Rothbury, Michigan. Its new Her Forest initiative is a collaboration between women and is intended to create the most supportive, comforting and empowering environment possible for women at the festival. Within Her Forest, there is a Women's Group Camp, a Women's Circle, and a special Forest Women Panel. As Carrie Lombardi from Electric Forest quotes “I see Her Forest as...a platform to share our goals for the future of the music festival community.”

But it’s not all about response after having a tough or unpleasant experience. As Stacette Lockdown from Shambhala put it, they are not just there for "crisis response." They want to be “upstream” from incidents threatening women. They meet people at the gates and say things like “Consent is Sexy” and preemptively point out where the Safe Space is on the map. They want to encourage women to know where they can go if something happens, but also to remember that they have constant support on festival grounds. Whether it’s protection, tissues, a listening ear, help finding their tent or their friends, or maybe just a pit stop to get warm, Shambhala's Safe Space is there. It can anchor women throughout their experience to empower them. “I have really noticed a difference in the rate of incidents,” says Lockdown. “Women feel safer. We want to help make sure consent and safety are not an afterthought.”

Alongside Shambhala, Electric Forest, and Bass Coast are Germany's festivals Nation of Gondwana  (which started a Safe Space last year) and Fusion Festival , which also has similar initiatives. It’s a growing movement, and as Lockdown put it, “it’s an all around good idea for public safety. Every festival can do this.” It only takes a marginal amount of effort for festivals to get involved. How do you eat an elephant? One bite at a time. For Shambhala, they looked at existing protocols from the nearby University of Victoria, and then “Shambhalized it.”

At the end of 2016, Australia's two-decade-old festival Rainbow Serpent announced perhaps the country's first initiative to provide comprehensive support services to people affected by gender-based violence at their upcoming 20th anniversary in January 2017. The festival consulted government funded advocacy groups and emergency service providers to create its new festival space call "The Nest," which provides a safe place, information and support for patrons who have experienced sexual or gender-based assault.

Social Services Manager for the festival, Mel Pearson, says it’s important that women, LGBTI and other marginalized people know they are able to express the need for help in a safe environment if they are experiencing gender violence or harassment. Ms. Pearson says, “Research shows that while most gender and family violence occurs inside the home, outside the home the greatest risk is in large crowds such as sporting and music events.

“We’re introducing this program at Rainbow because we care about our patrons and want to be proactive about safeguarding every element of their personal wellbeing. We need to acknowledge that family and sexual violence is a problem in wider society and it’s therefore natural a festival with 18,000 attendees isn’t immune from those issues." 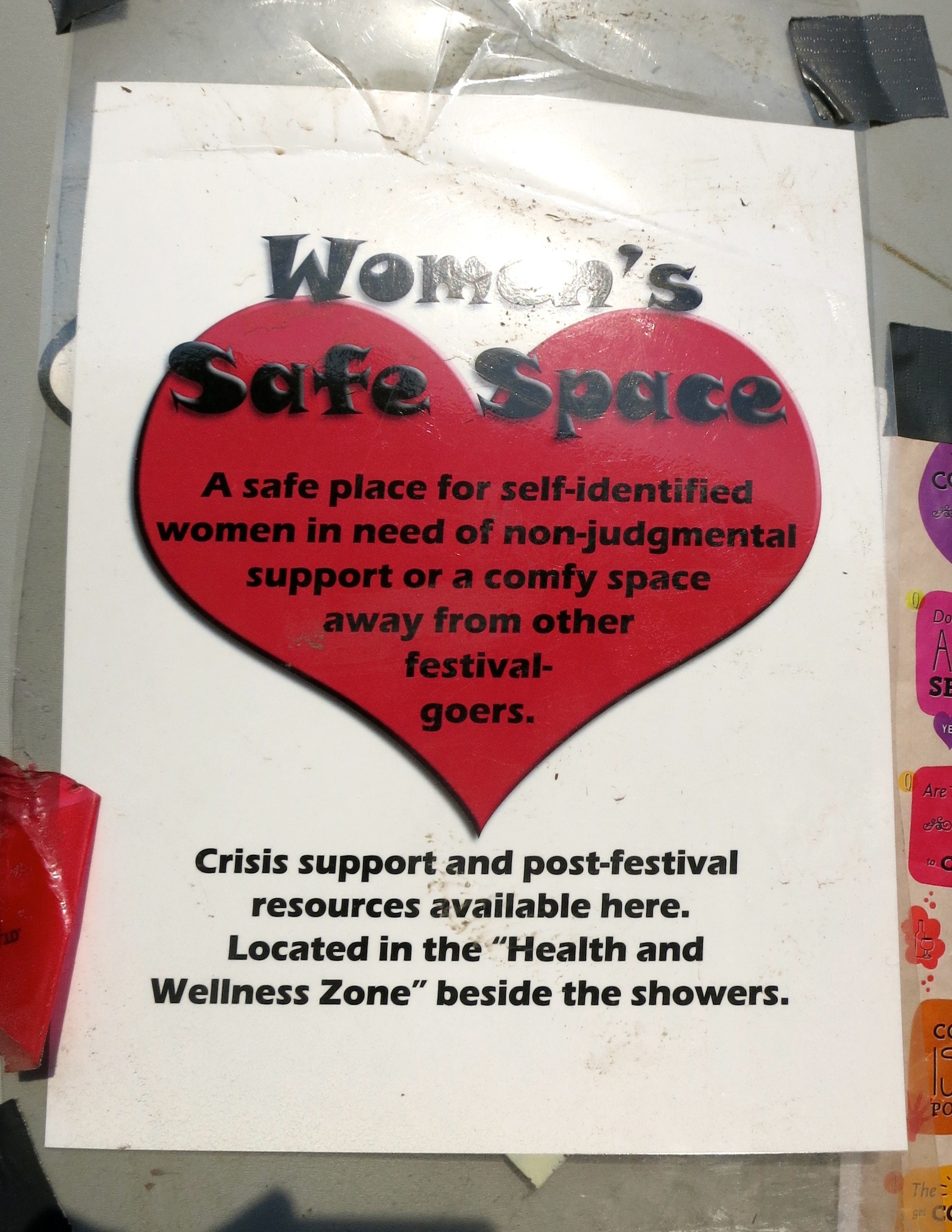 This is not about separateness. This is about creating a place where we can allow the feminine to flourish and bloom. It’s about creating a community where women have secure places to anchor themselves when they encounter rough seas.

Everyone in the festival community can speak up and protect each other during our revelries. We can all choose to care about each other and appreciate the beauty of all genders. As Forrester emphatically quotes, it’s about “creating a climate where harassment...and lack of respect for bodily autonomy has no place…make your whole festival a space where that doesn’t belong.” The global festival community is already on the cutting edge of thought leadership. Though we have a long way to go, the movement towards widespread women's safe spaces is quickly becoming another feather in our glittering cap.