An Introduction to The World's Biggest Festival 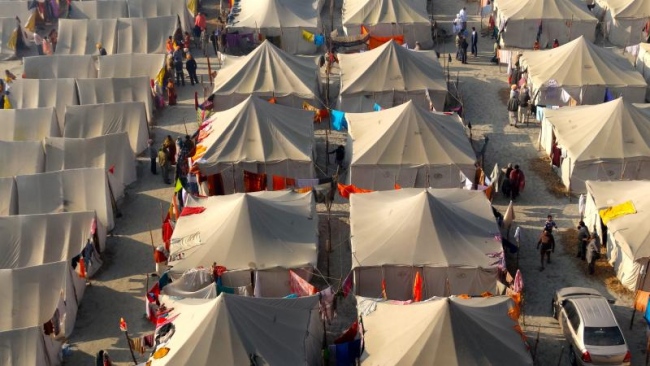 Kumbh Mela forms a place for the salvation of mankind who wish to be free of the cycle of life and death. No small theme for the world’s biggest gathering. The crowd on the main days is large enough to be seen on space satellites so you can imagine what it feels like on the ground. Actually, it wasn’t so bad until February 10, the main bathing day of the 55-day festival that starts in mid-January and runs almost two months (more on both the bathing and the stampede experience in later posts).

“Kumbh” means pitcher and “Mela” is the word for fair in Hindi (the Indians love their fairs as they would win the gold for best festivals in the world if the Olympics handed those out). Kumbh Mela – which is mentioned  in ancient Hindus books and plays – has its origin in a mythical battle between Hindu gods and demons over a Kumbh filled with the nectar of immortality. The pitcher supposedly breaks in the fight and drops of the nectar scattered at four riverside cities – Nashin, Ujjain, Haridwar, and Allahabad. When the planets align in the same position as the original battle, pilgrims flock to these four places for an approximately every-three-year festival with the larger Maha Kumbh Mela happening every 12 years in Allahabad. 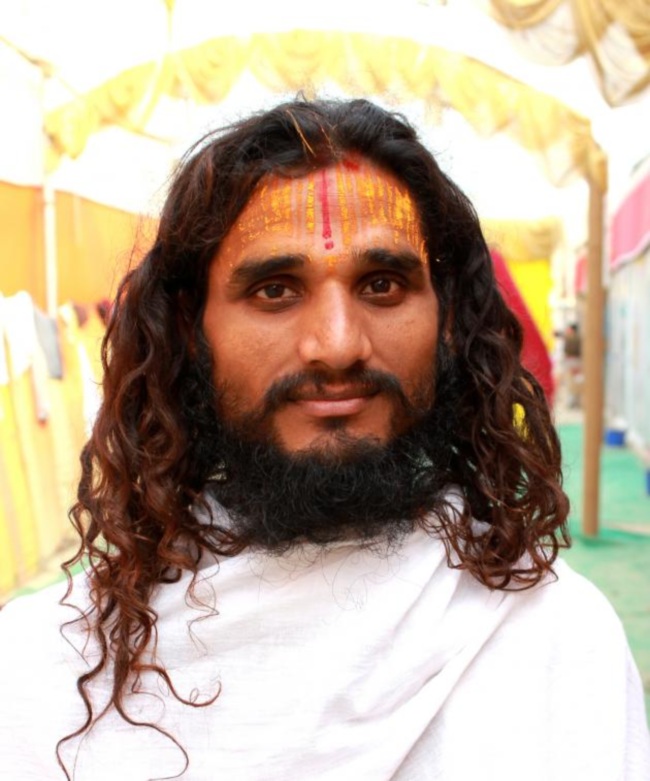 It’s in the camps that one gets a respite from what has been estimated to be 50-110 million fervent devotees who make the Kumbh Mela pilgrimage. The 50 square kilometers of riverfront is separated into 14 sectors with impressive, temporary pontoon bridges, some as long as a half-mile, connecting each of the sectors over two rivers. You know where to go based upon which guru or sect you follow (will talk more about the various sects in my next post) as most of the sects are centered in 6 of the sectors. I was so fortunate to be with Acharya Sri (and Nitin Dixit) given he was so close to two gurus, Brahamrishi Maunibabaji (pictured below) and Barfani Dadaji, centered in the Bairagi sect sector. Yes, sorting through all these unfamiliar names for an American required a bit of a scorecard. 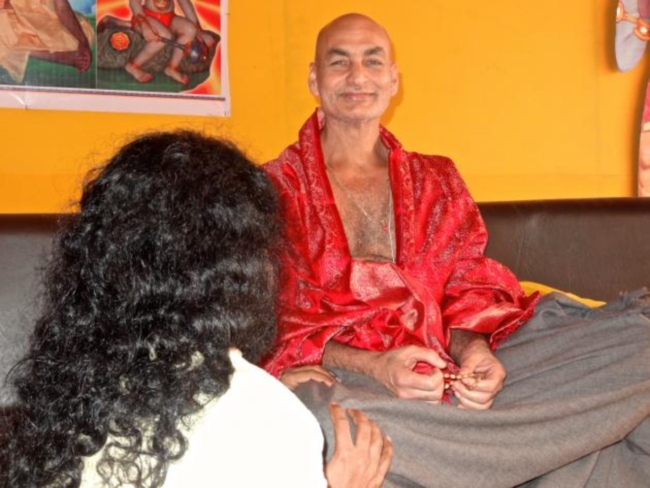 This may sound a little primitive, but as you can see from the photo I took of the tents from a bridge above, many of these camps are extremely well-organized, clean, and comfortable. Given how long the Indians have been doing these Melas, they know how to organize all the minute details. Beyond the infrastructure, there’s an enormous crew of supporters, like Fhoola pictured above, who exhibited that perfect Indian hospitality. As a hotelier, I was mighty impressed. 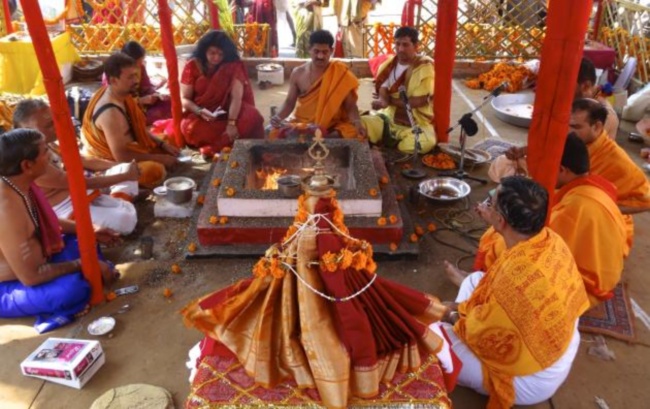 Part of the clan inside the Barfani tent

Part of the reason why I’ve chosen to create a website dedicated to the world’s 300 best festivals is to facilitate people’s “cultural curiosity.” Kumbh Mela is a perfect habitat for stoking that inquisitive fire. But, I had to become “culinarily courageous” when it came to eating in the camps. The campfire-based Indian cuisine was outstanding but when I took one look at the fourth world kitchen, my fear of stomach bugs went from my gut to my head. As it turns out, I didn’t have one intestinal problem during my nine day sojourn in India. 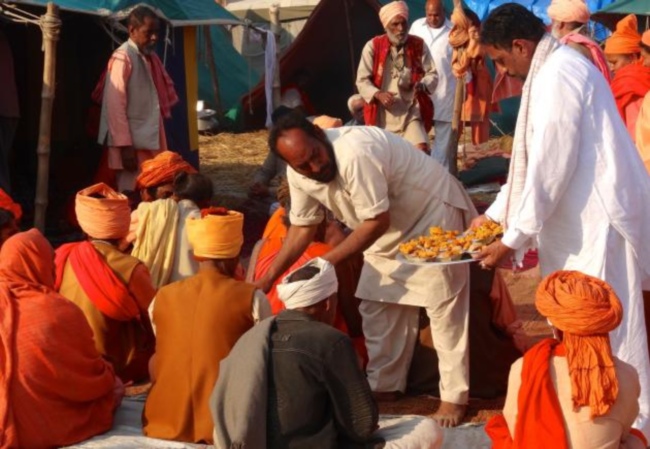 Camps welcome other camps to come for a free meal

Our particular camp, named after the 264-year old Barfani guru (pictured below) was popular since this man has defied time. 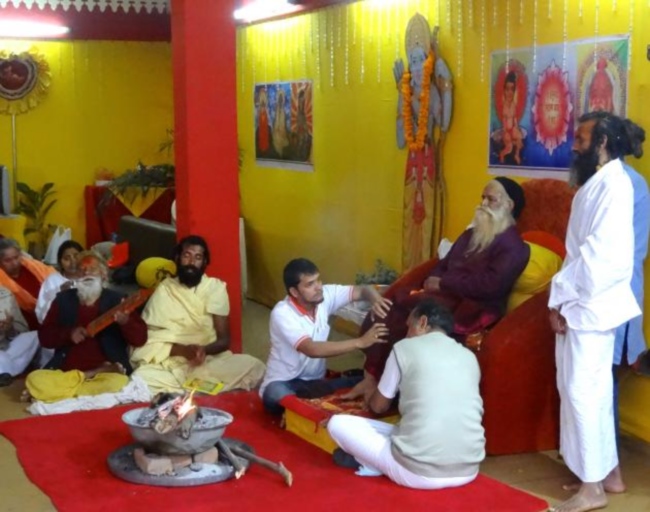 Barfani Dadaji, supposedly more than two centuries old, getting some love from his followers

And, since Kumbh Mela’s theme is immortality, he’s a bit of a celebrity amongst the camps. If you want to learn more about Kumbh Mela, I would recommend two videos as opposed to reading books:  Shortcut to Nirvana  by my friends Maurizio Benazzo and Nick Day or  Kumbh Mela: The Greatest Show on Earth.

Both give you a sense of the visual spectacle, but the truth is nothing can prepare you for the enormity of being there. Here’s a news video of this year’s Mela, which gives a flavor of the experience… 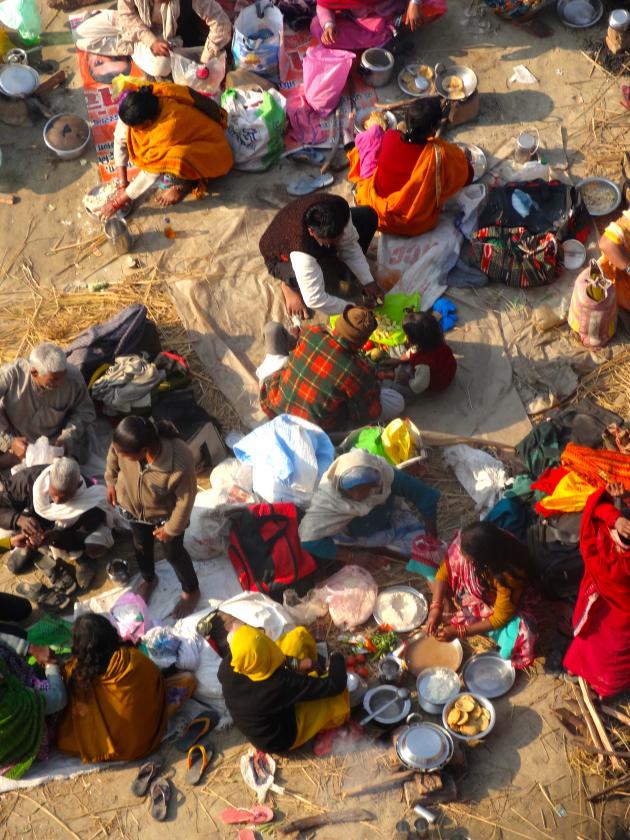 Many camps feed the massive numbers of devotees

In sum, while at first you may be cautious about entering a camp as it feels like a little bit of a private compound, just smile, be gracious, and enter knowing that part of the way these gurus and sects propagate their message is by meeting new people, although not once did I feel any whiff of cultish-ness in a Kumbh Mela camp.