Ask The Festival Lawyer: What Are My Legal Rights If Security Touches Me Inappropriately?

I really enjoy your articles and information. I have a question. I went to Hangout Festival this year and while overall it was an awesome festival, the gate security was completely ridiculous. On my last entry, the hired security guy's last "check" was to place his forearm between my legs and then move it up to actually touch my d**k. After he did it, I said “Hey you touched my d**k" and that's incredibly wrong and  unbelievable. He said "That's right, I did." I heard many, many complaints of people saying they were "felt up" inappropriately, and many girls saying they were violated. I plan on contacting the festival about this to hear their thoughts – but I wanted to know, what are my options other than saying I'm not okay with this type of search?

After going to a lot of festivals over the years, it’s clear to me that the quality and professionalism of the security at an event can have a huge impact on your overall experience.

This year I was blown away by how professional and friendly the security staff was at Coachella . Not only were they incredibly responsive to safety issues (for example, immediately getting help for someone I saw who was by themselves and looked out of it) but also were amazingly upbeat and friendly. I left the entrance gate feeling safe, and like the people at the event wanted me to have a great time.

But that’s not always the case. Sometimes it’s just a poorly trained staff member or a single misunderstanding with a festie that can taint your perception. In fact, this festival season, I’ve received nothing but a steady stream of complaints about security at certain festivals.
I asked my friend Coachella Rachella (one half of the amazing Festival Twins) if she or her friends had ever experienced an inappropriate search, and how they handled it. 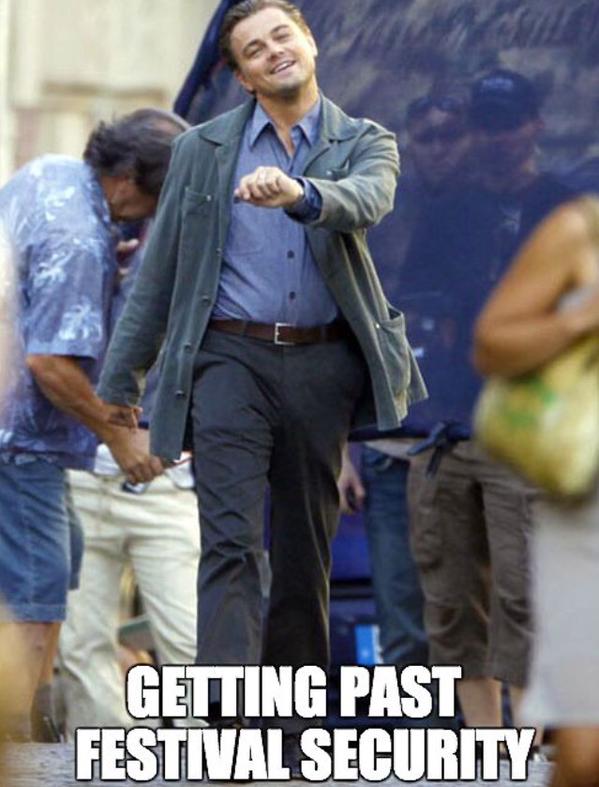 One year at EDCLV I felt very violated by security. As the female security guard was patting me down she started pressing on my pubic bone. At first I was like, "Ok ,this is different," but she continued to do it for about 20 seconds. I was so uncomfortable but didn’t know what to think about the situation. When it was over and she let me go I grabbed my stuff and got out of there as quickly as possible. Did I feel violated? Yes. Did I do anything about it? No. I know about a dozen girls who have similar stories involving female security guards at different events. Some girls have told me that they have had their breasts pulled out or looked at or they have had hands down their pants. Before my incident I never thought twice about this being an issue, but after talking to others it’s apparent that it happens but people don’t know how to approach the issue. I feel as an attendee we often get bullied by security at festivals and shows because they “have power,” which is wrong. They should be there to make us feel safe, not violated.

The problem that festivals have with people bringing dangerous items into their events is nothing new. You know the song “Smoke on the Water” by Deep Purple? (Yeah you do, it’s the song they ended this season of Better Call Saul with)

The lyrics “Smoke on the water/fire in the sky” actually refers to a fire started during the Montreaux Jazz Festival by “Some stupid with a flare gun” that nearly “burned the place to the ground.”

Because of this danger, the terms and conditions of your wristband (as well as the signs at the entrance) always include a search clause. The law refers to this as an “Implied Consent” search. In other words, since you knew you were going to be searched but decided to enter an event anyway, the law “implies” that you agreed to be searched. This probably isn’t a constitutional violation as long as it’s made clear to you that you’re free to walk away.

Fair enough. Everyone wants people at festivals to be safe. But how far can festivals take this “implied” permission to search you? Can they conduct a pat search? A strip search? A full body cavity search? Or to put it another way, what rights do you have if an entrance search becomes inappropriate?

Legally speaking, courts seem to draw a distinction between so called “limited” searches and “invasive” searches. Courts recognize that festivals have a “vital interest” in keeping their patrons safe, and dangerous items out. “Limited “ searches (things like pat-down searches, metal detectors, and the like) are normally okay when they are being done for the purpose of looking for weapons or other dangerous items.

But so far, courts have struck down implied searches when they are too “invasive.” “Invasive” is basically legalese for “Wait, you touched people where?” This has even been true when festivals have argued that they needed to conduct intimate searches so they can find drugs.

For example, in State v. Iaccarino, 767 So. 2d 470 (Fla. Dist. Ct. app. 2000) the court struck down as being “overly invasive” the searches being conducted at the entrance of the “ZenFest” festival. The court rejected the idea that keeping drugs out was enough of a “vital interest” to allow this level of intimate and personal searching. The court said if that was the case, all you would have to do to get rid of the 4th Amendment would be to put signs everywhere saying, “You are subject to search at any time”:

“If this court permitted the illegality of the substances themselves to rise to the level of 'vital interests,' then a similar sign posting would justify any search of any person at any time and to any degree. For example, such a 'vital interest' could seemingly justify a search at a high school football game, where each student, teacher, and parent could be directed to take off shoes and socks, pull out their bras, empty their pockets and the contents of wallets, and have their crotch and genitals frisked.”

The problem in the Iaccarino case was how personal the searches were becoming. They were treating their patrons as if they were “new fish” being processed for Litchfield Penitentiary. Searches included things like “genital taps” and “crotch frisking.” (Neither of which is nearly as much fun as the name suggests.)

(Festival lawyer sidenote: This whole area of the law is way more complicated than the above description indicates. I haven’t even touched on the issue whether the 4th Amendment even applies to private security guards. You can read more a more thorough legal analysis here.)

If someone is touching you inappropriately, probably the most important thing you can do is to calmly but immediately object and be clear on why you are objecting. For example, “This search is inappropriate, I am asking for your manager to be called.” Stay calm. Make note of the individuals involved and complain directly to management after the fact. Give specific details of what happened. If a festival ignores your complaint, consider taking your case to social media. Gather other persons who had similar bad experiences and have them add their voice to yours. If you can get social media trending the hashtag #gropefest2015 the fest is sure to sit up and take notice.

When I’ve spoken to individuals who have made formal complaints to festivals they often express frustration that their concerns were not taken seriously. Perhaps the most important thing we can do as a community is to join together to “vote with our wallets.” One person making a complaint can be ignored. But if a festival gets a reputation for unprofessional security and the community chooses not to go because of that, the festival will have to change their approach – just like Mountain Jam did in 2014.