Before History, There Was Varanasi 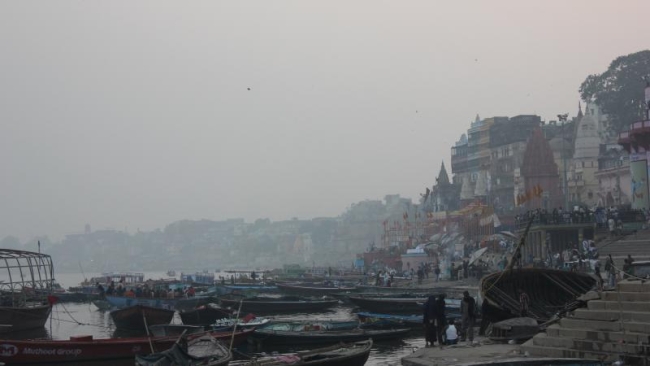 My friends who are Indo-philes laughed at me when I told them my virgin voyage to this country was 5 nights in Varanasi and a few nights at the largest celebration of humanity in history, the Kumbh Mela festival just 100 kilometers away. This is India with an exclamation point! It’s intense. It’s incense. And, at moments, it’s nonsense…some of what you see doesn’t make earthly sense. But, this oldest continuously inhabited city on earth, the sacred heart of the Hindu religion, is truly a feast for seeking eyes and the ultimate playground for photographers. 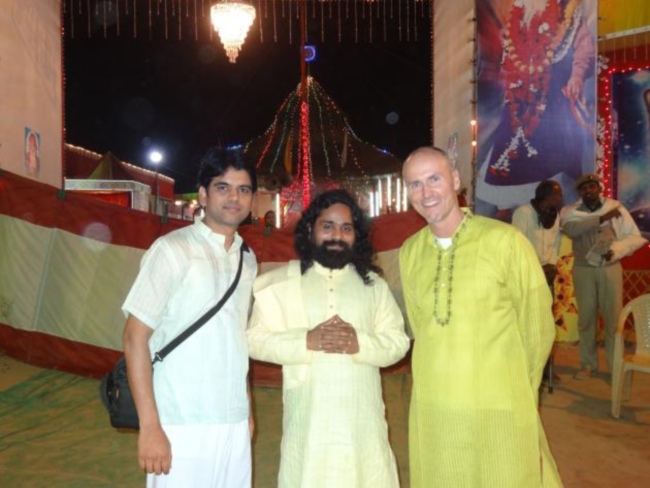 First off, after doing the Thaipusam and Harbin festivals on my own during this 5-week Asian trip, I was excited to spend nine nights in India with two new friends, Nitin Dixin (the taker of three pics in this and the next post — humbly wishing to remain anonymous) who had traveled to the US from India and heard me speak at a conference, and Acharya Sri Maharishi who was our spiritual guide and wise-cracking comedian. I was very fortunate to have these two “locals” with me as they gave me access and insight into so much of Indian culture as well as opportunities to meet swamis and gurus at Kumbh Mela. 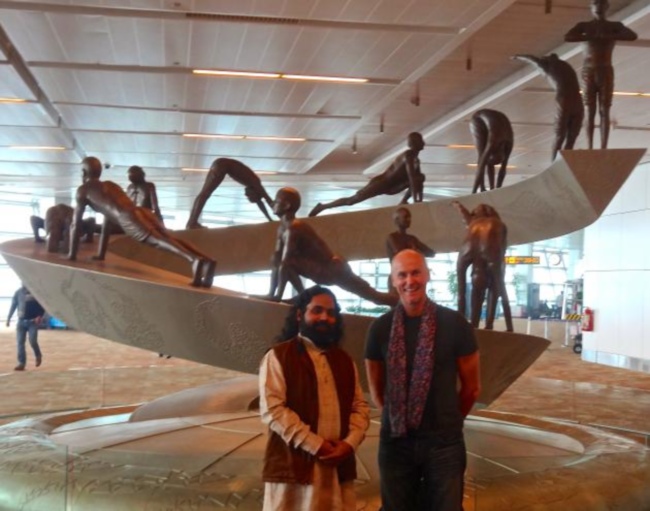 Delhi’s airport: What other international airport would have a sculpture dedicated to yoga in it?

Varanasi’s population of more than 3 million swells by 25-50% during the every-12-years Maha Kumbh Mela that occurs in nearby Allahabad, as many of the 100 million estimated devotees to the Mela make a stop in this sacred city. 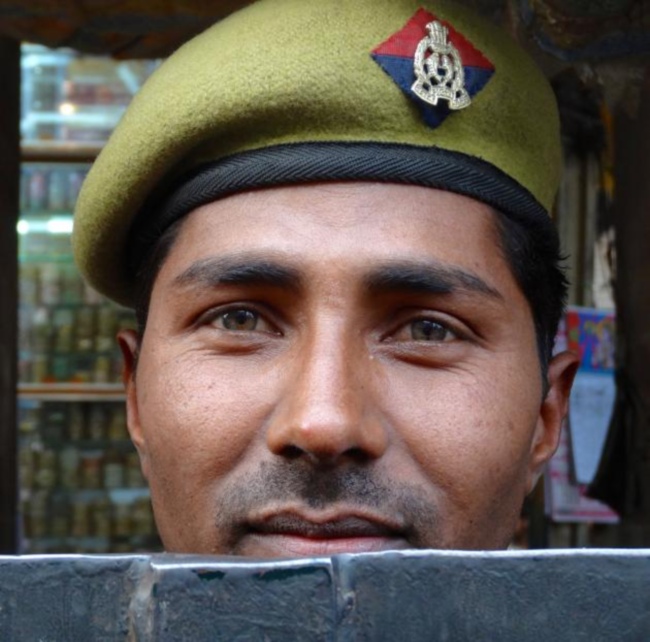 A big police presence in town with so many visitors, but Indian police know how to smile

Even the drive from the airport was a thrill a second. Our driver, Ajay, told us that there are three things you need for driving in India: a good horn, good brakes, and good luck. In this town dedicated to faith, I came to believe that faith was being a passenger in an out-of-control auto-rickshaw on a busy market day. Whether it’s the crowds, the sensual overload (do you love the smell of fresh cow dung in the morning…and, by the way, who owns all these roaming cows?), the fear of intestinal intruders, or the divine tricksters that play with your dreams, some visitors find Varanasi to be Maximum India — then realize next time they’ll ask for a smaller portion. 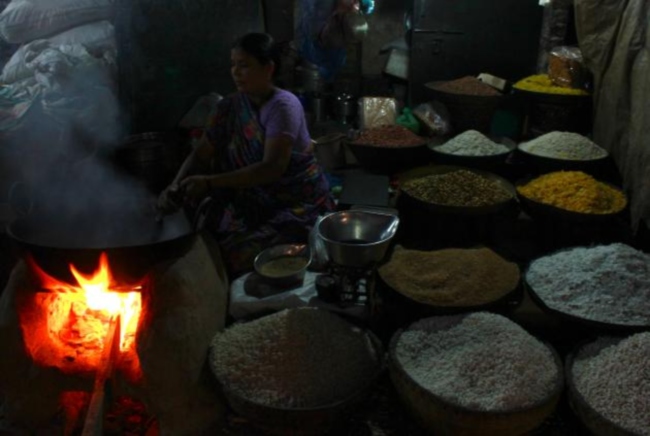 I was bewitched by Varanasi’s sacred offerings (outlined in my next blog post), but I was also impressed by the spirit of hospitality here. There’s an Indian expression “Atithe Devo Bhavah” which means Guest is God. This is part of the reason why Indians around the world are drawn to the hotel business. After staying at a Delhi luxury hotel ranked #1 in the world, we chose a delightful $40 per night homestay that doubled as a silk and fine cloth exporter 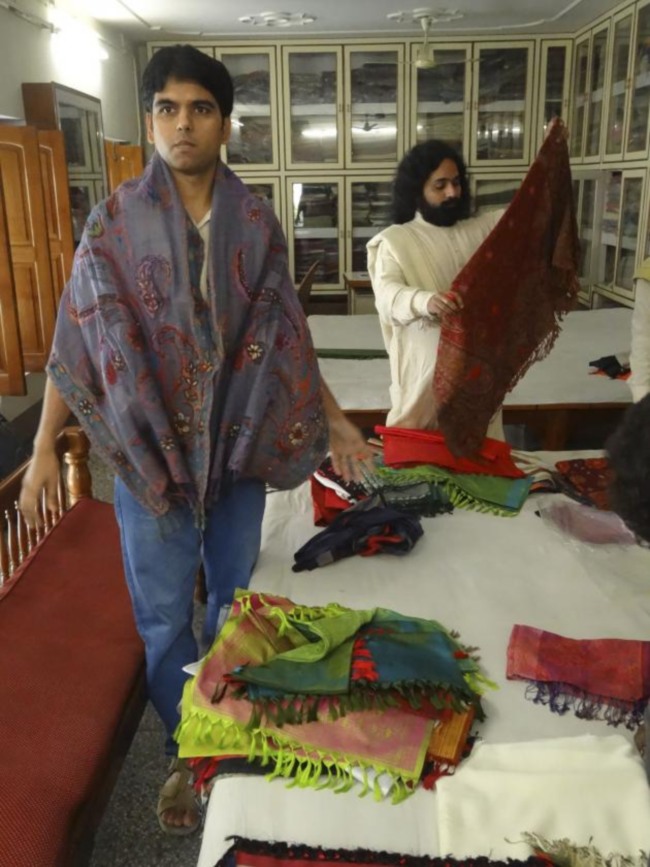 I came to realize how captivated Indians are with fine textiles

This homestay was home to three generations of one family and the meals were heavenly. I loved grandpa doing his morning chanting through the house as he prayed on various devotional art pieces. The home was full of enchanting conversations about the meaning of life and I’ll never forget Acharya Sri’s response to my mentioning having grandkids in their teens. Without batting an eyelash, he said, “Are you speaking about this lifetime or another one?” You don’t have these conversations in many other large cities on the globe. 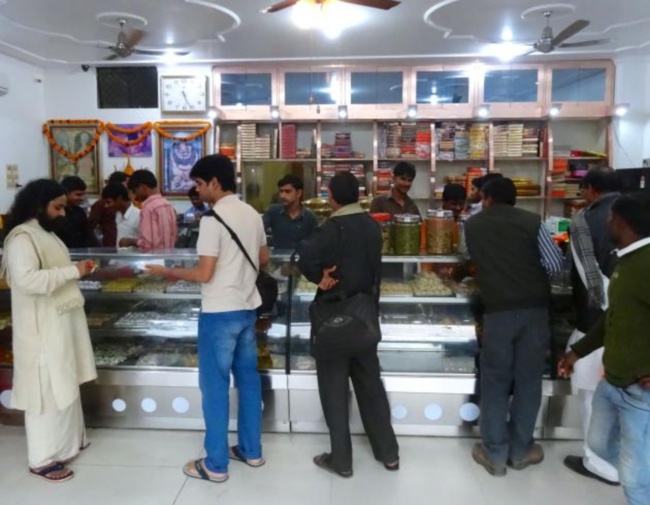 Not only do Indians love silk but they also love sweets and this place is deservedly-famous, New Rajshree Sweets

And where else in the world can you have a tough-looking, stocky man paste ash and vermilion on your forehead without feeling like you need to put on boxing gloves? Varanasi is lovely and loving. 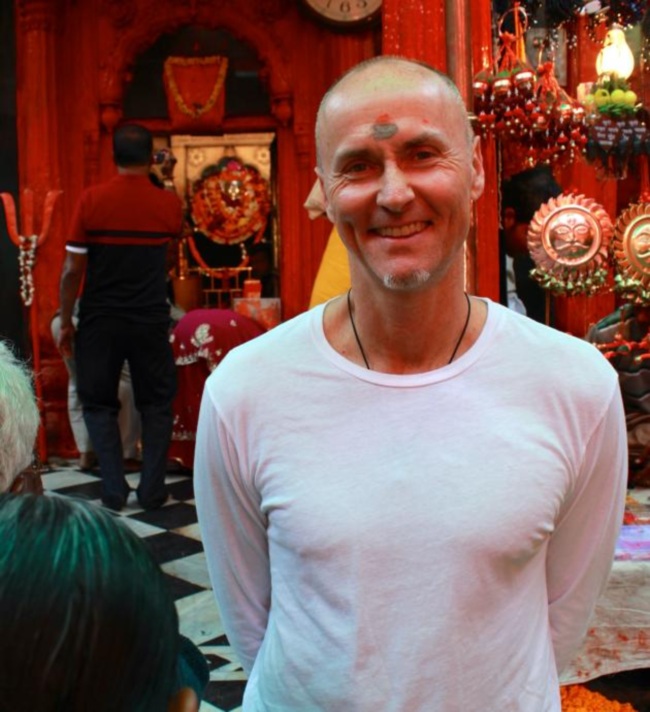