Can't Make it to Sundance? Some tips for Telluride Instead 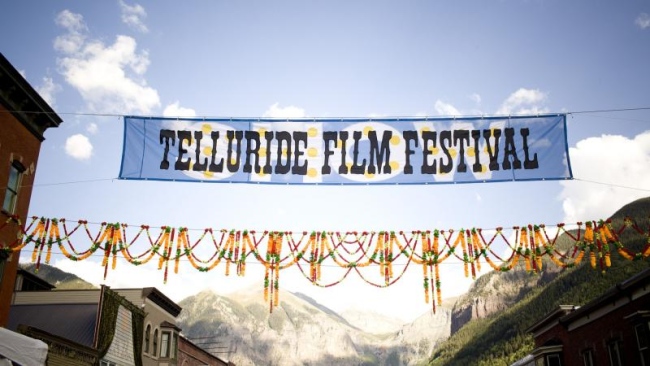 Chip’s take: The Sundance Film Festival opened yesterday and, alas, you’re not there. Fortunately, each year during opposite seasons, there’s a second film festival that’s equally enchanting, the Telluride Film Festival during Labor Day weekend at the end of August or early September. My good friend, Steven Addis, has been going to this festival religiously for more than a dozen years and this year will be its 40th anniversary. So, consider doing your planning now. One tip from me (as I was there in 2011 and will likely go again this year): for a complete change of pace, consider making the one-hour drive in the gorgeous Rockies from Telluride to Dunton Hot Springs resort to experience their indoor/outdoor hot springs, lunch and a glorious setting (pricey at $115 per person, but a nice change of pace after sitting in a movie theater all day).

In the late ‘90s, my friend Linda invited me to attend the Telluride Film Festival with her. She had been going almost since the beginning, close to 40 years ago. My passion for movies motivated me to say yes and I was instantly hooked and haven’t missed a year since. Well, except for the year when my son was threatening to be born. Alas, he waited until after the festival and I missed it in vain.

When Chip asked me to assemble a few thoughts about how to get the most of the Telluride Film Festival experience, I jumped at the chance. Of course, your mileage may vary as we all have different tastes. But here goes…

Pick the Right Festival for You

Before even deciding on Telluride, you should research the difference between the festivals and make sure this is the one for you. I admit, other than local festivals in San Francisco, I haven’t attended others like Sundance, Toronto, or the myriad others out there. But, I can tell you that Telluride lives up to its reputation for being about the love of film. If you want to see paparazzi hounding movie stars or crash bacchanalian parties with budding starlets, this isn’t the festival for you. Don’t get me wrong, there are plenty of stars that travel with their films for Telluride premieres. But, even to them, their presence seems secondary to the films. The energy toward the stars is respectful and low-keyed. Entourages would seem contrived and overly indulgent. George Clooney sat with us in the audience for his and other films he watched. Catherine Deneuve shopped with a friend in the local shops. I sat in the lobby of a hotel discussing Capote with Philip Seymour Hoffman for an hour. The rumor was that Ben Affleck snubbed the Venice Film Festival to instead travel with Argo to Telluride for its North American Debut. You might say that the Telluride audience is more film-struck than star-struck.

Which Pass to Buy

Once you’ve decided to attend Telluride, you’ll face the daunting question of which pass to purchase. This is a tough one. Especially since Telluride virgins have little to go on to appreciate the differences. I’m going to focus on the three primary passes (although there are a couple more):

Acme Pass - One of the largest and best venues is the Chuck Jones Theater. This pass gives you exclusive access to the “Chuck” plus two regular passes to the other venues. PROS: Most of the best films get screened at the Chuck and you’ll get in to see them. For a first-timer, this is a great choice. It’s less expensive than the other passes and seems to provide a great experience. CONS: The Chuck is up in the Mountain Village. If you stay down in town, you’ll be on the gondola a lot. Not a big deal but something to consider. The center of gravity of the festival is definitely in town and not up in the village. Also, you will miss some good films. There are nine venues and over 50 programs during the festival. No matter how you plan, you’re going to miss something great.

Festival Pass - This is the primary pass that most people get. PROS: You have unlimited access in terms of venues and you’ll likely see your top choices at some point during the festival. CONS: Be prepared for some frustration. You will wait in lines an hour or more in advance of a screening. This means that you’ll see fewer films as so much time is eaten up in lines. And, once you’ve waited and finally gotten to the door, you may be turned away if the theater is full. Every year, I hear lots of complaints about this issue. They try to remedy it with a numbered, queue system. But, even that is not without its flaws because the higher priority passes are seated first and, if a lot of them show up, the remaining capacity of the venue drops at the last moment – right before the Festival Pass people are let in.

Patron Pass - If you want to see a ton of films and budget is not an issue, this is the pass for you. PROS: With the right planning, you can see films until your eyes fall out. Four or five in a day is not only feasible, it’s easy. Six is even possible if all the stars align. Patrons are let in before the other passes so they just have to arrive at a venue before the long lines are let in. Waiting is minimal and they even throw you a Patrons’ Brunch where you can cozy up to the filmmakers and stars. CONS: Moolah, dinero, bread, bones, greenbacks. A Patron Pass will set you back almost $4,000. But, about half is a charitable donation so consider it your contribution to the film arts. No other downsides – the Patron experience will get you into a zillion films. But still not enough to feel okay about the cost-per-film math (a calculation not advised for any of the passes).

The Telluride airport is like no other I know. It’s carved into the side of the mountain. Just this past year (2012), I heard a story of a man completely freaking out, screaming “we’re going to crash into the mountain!” as the small prop plane took its routine decent into Telluride. The first time is a bit daunting. But, landing right in town is quite convenient. Be prepared, however, to be redirected to Montrose if there’s any inclement weather. I generally just book into Montrose. The 90-minute drive is beautiful and you can get to know other film lovers on the shuttle. An added benefit is that Montrose is at 5700 feet. Driving, rather than flying, the added 3000 feet allows your body to adjust a bit easier. Yes, Telluride is about 9000 feet up.

This is the most personal decision of all. The choices run from all classes of hotels and condos to finding rooms in people’s homes. If you get the Acme pass, you might want to stay in the pricier Mountain Village to be close to the Chuck Jones theater. If you’re on a budget, a room with others in a rented condo might be the best choice. The folks atski.com have always been of great help to me. I now stay very close to the base of the gondola. Not only is that central to everything in town, it’s convenient to jumping on the gondola to see a film at the Chuck.

If you’re at all like me, the trip to Telluride is to see movies. I quite literally run from venue to venue and meals are usually what can fit in one hand. Lots of turkey dogs and gyros from the guy with the cart. But, there are also some notable restaurants. My favorites include Cosmopolitan, 221 South Oak, Allred’s, Rustico, Siam, Hongas, and There.

Perhaps the most important tip I can offer is to leave your introverted self at home. Seeing the films you’re going to love, and avoiding the ones you won’t, means knowing the buzz that develops around each. The only way to know is to talk to everyone. Waiting in lines is not wasting time. It’s your chance to poll everyone around you. From year-to-year, I recognize the faces of those whose taste I share. I seek their opinions any chance I get.

And there’s an ethos of this audience. No one talks during a screening and they never spoil a plot afterwards. A great thing about Telluride is the fact that these are premieres and you’ve likely not seen trailers or gotten any hype prior to arriving. I remember sitting in the theater waiting for the new Ang Lee movie to begin. All I heard was that it was something about cowboys. We got none of the incredible hype that would quickly surround Brokeback Mountain (and spoil it). Knowing nothing about a film (other than that people recommend it) makes for much more enjoyable viewing.

Of course, the air is dry and the altitude high. Drink lots of water.

If you travel with a group, understand that some may blaze a different trail. It’s more fun when you can compare notes at the end of the day or vehemently disagree on what makes a good film. Embrace dissention.

This year (2013) will be the festival’s 40th anniversary. There will be a full day added. And, if you’re truly dedicated to see as much as you can, stay through Labor Day and leave on Tuesday. You’ll get to see several films on Monday afternoon that you surely missed. And, crowds thin out a little.

The festival is a rejuvenating experience for me. It renews my faith int he world even when the subject matter is challenging or bleak. The sheer creativity on display is inspiring.