On January 1, 2018, California voters approved a law that would change the course of the Golden State's history. Proposition 64, the Adult Use of Marijuana Act, ushered in a new era of legalized recreational cannabis use, which meant adults 21 years or older may legally possess up to one ounce of marijuana and grow up to six cannabis plants at home – and instantly made California the world's largest marijuana market. 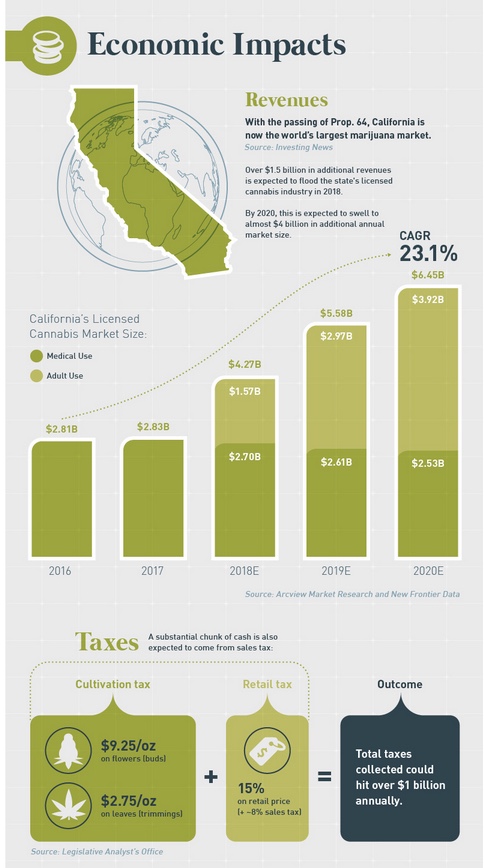 California's cannabis industry initially exploded in 1996 with Proposition 215, which legalized use of cannabis for medicinal purposes in the state. Following that decision, the Emerald Triangle, which is comprised of Mendocino, Trinity, and Humboldt Counties, became the biggest marijuana growing region in the United States and made marijuana available at medical dispensaries for any adult with a relatively easily obtainable recommendation card. A significant portion of what's been grown in this region has historically made its way illegally across state lines. However, now that the California's cannabis industry is more regulated, over $1.5 billion in additional revenue is expected to flood the state's licensed growers and distributors in 2018. With reports of cannabis legalization adding net profits of $35 million to a single county in Colorado's economy in 2017 and $26 million per month in tax revenues in Washington, it's no surprise that cultivation and retail taxes on cannabis are also set to transform California's already massive economy (it's the sixth biggest in the world) by adding more than an estimated $1 billion annually. The industry has already surpassed the state's other most profitable crops – milk/cream, almonds, and grapes – in estimated market size. 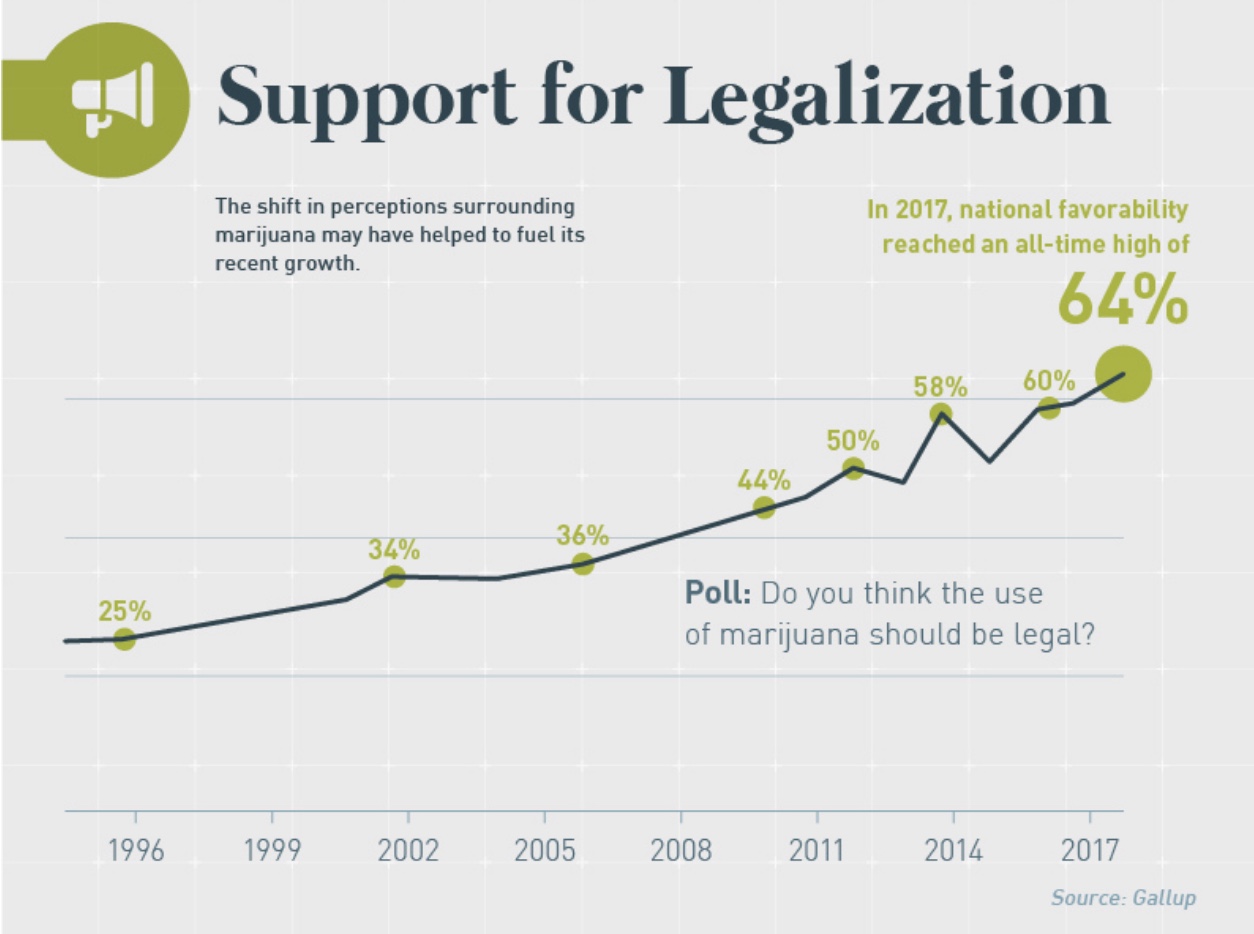 "As California goes, so goes the nation." This popular saying refers to the political, social and economic influence the Golden State has historically had on the rest of the country, which many think will even apply to California's resounding acceptance of cannabis culture into the mainstream. Recent studies and polls have suggested such a change is already under way. The Pew Research Center reported in 2016: "Today, 57% of U.S. adults say the use of marijuana should be made legal, while 37% say it should be illegal. A decade ago, opinion on legalizing marijuana was nearly the reverse – just 32% favored legalization, while 60% were opposed." A 2017 Gallup poll said that national support for legalization reached an all-time high of 64%. Later in 2018 during the year's mid-term elections, voters in a whopping 12 states will decide whether to legalize adult use of marijuana.

Forbes reports that federal legalization of marijuana could result in an additional $105.6 billion between 2017 and 2025, according to a new report from the cannabis analytics firm New Frontier." This includes projections for business tax revenues, payroll withholdings, and a 15% sales tax. "Meanwhile, fully legalizing cannabis today would add 654,000 jobs and up to 1 million jobs by 2025," said the same article.

What better way to see the booming bud movement in all its glory than at a music festival? One event in California that's celebrating cannabis culture while educating its 45,000 attendees about cannabis is Chalice California. Held at the July 13-15 at the San Bernardino County Fairgrounds in Victorville, California, the event artfully combines cannabis culture with our country's love affair with music festivals – its impressive lineup in 2018 is on par with many high profile music festivals going right now, featuring everyone's favorite party starter Bassnectar, rap legends like Ludacris, Bone Thugs-n-Harmony, and Pharcyde, as well as Cut Chemist, Thriftworks, Curren$y, and more.

Chalice California the perfect way to enjoy products from the top cannabis companies and the next generation of industry stars who'll be vending at the festival. Chalice features hashmakers, the country's top growers, every kind of edible or accessory imaginable, and talented glass blowers creating over-the-top pieces you won't see anywhere else. As you tour the on-site selection, you can talk to the products' makers and creators and educate yourself about consumption, how stuff is made or cultivated, and more. When you need a break from bombastic tunes and the heady vending area, there are renowned street artists to admire and carnival rides to wild out on. And don't miss the annual grow competition, which awards the best of the best in many categories such as Flower, CBD, Edible, Topical, and more.

In many ways, Chalice California represents a new, growing wave of respected festivals and events around the globe that seek to educate the masses about the positive impact of cannabis, provide a safe haven for cannabis enthusiasts and medical patients, as well as put on a damn good show. In the years to come, as more states legalize this mystical plant, you'll see more events like this one pop up. Just remember that Chalice California helped pioneer the movement.

“This year’s Chalice will make history in several ways,” said Chalice founder Doug Dracup. “We’ve always been a leader, and we plan to lead by example at Chalice 2018. We know all eyes will be on us, and we have no doubt that we will set the bar for the future of legal cannabis and its relationship with music and arts festivals.”

Get a (basically) free ticket to Chalice California with Everfest Premium!

This article was produced as a collaboration between Everfest's editors and Chalice California.