Conflicted in Pamplona: Conscience or Curiosity

When you live in San Francisco, co-founded an award-winning vegan restaurant two decades ago, and have been called a “radical rebel” by your business brethren, you don’t easily admit to a hankering for running with the bulls. Blame it on Hemingway…I like to drink, I like to write, and, on occasion, especially amongst my politically-correct friends, I like to be a contrarian. I also like to understand the culture of the “other,” especially when it has such a deep history. So, that’s why I came to Pamplona.

“Undercover” at the Running of the Bulls – photo Nick Gammon

Yes, my conscience felt a little sick to its stomach while my natural curiosity ached to partake in this nine-day celebration that has religious roots, but hedonistic ends. Why do 2 million people make this annual pilgrimage of beer, bulls, and blood? Do these revelers recognize that the bulls they’ll be running with in the morning will be slaughtered by nightfall (literally a life and death finish line for these poor creatures)? How is Spain reconciling that Barcelona has forbidden bullfights and, in reaction, Madrid has enacted laws to make it a sacred art form as protected as the city’s historic architecture? Historic or hysteric, I decided to take the plunge and spend three nights at the Fiesta de San Fermin that lasts from July 6-14 every year. 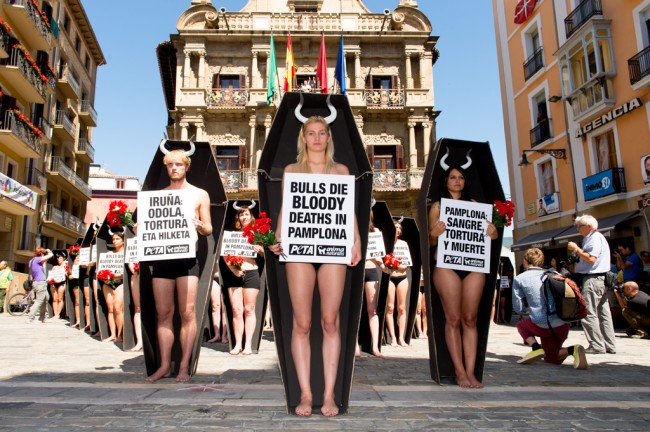 If you arrive early for the Fiesta de San Fermin, a couple days before the first bull run, you’ll encounter the Running of the Nudes, a PETA-sponsored event dedicated to “exposing the truth” about bullfighting. It’s not quite as naked as it used to be, as since 2006, this pre-event spectacle has required panties. But, the clothes or lack of them doesn’t define the event, the message does. As Gandhi said, “The greatness of a nation and its moral progress can be judged by the way its animals are treated.” 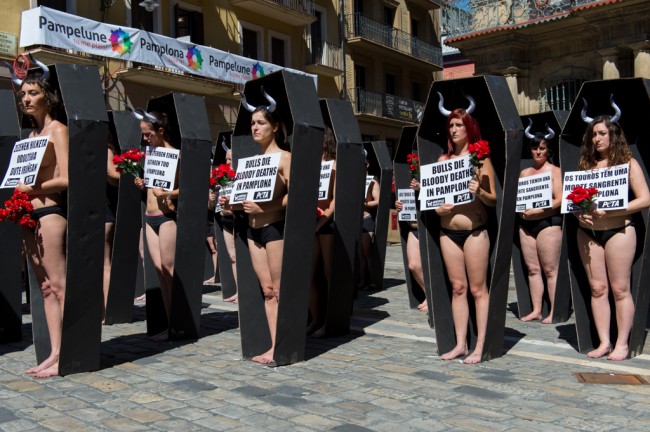 With 48 caskets, one for each bull that will die in the ring during Fiesta de San Fermin, it’s a sober way to start a very unsober festival. There’s also a marked gender difference between the bull supporters and the bull runners. But, San Fermin isn’t just a case of sober young women versus inebriated young men. 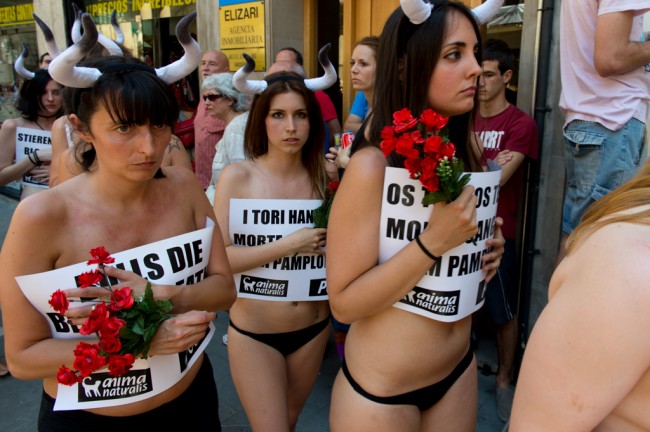 Historians trace the Running of the Bulls back as far as 1385, when bullfights first began in Pamplona. Some say the tradition officially began in 1591, when three main summer events – the festival of San Fermin (which I’ll talk about in my next blog post), the livestock fair, and the bullfighting festival – were combined. 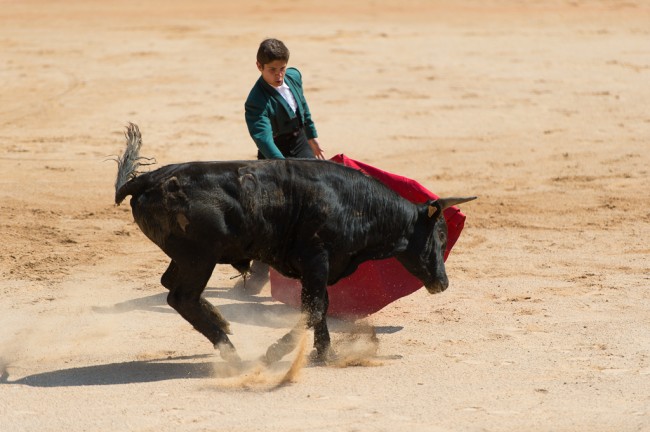 The only way to get the bulls from the corral to the bullring was by running them through the streets to the ring. Eventually, people started running with the bulls, even though it was illegal at the time. As every year passed, this became more and more popular, and when Hemingway immortalized it in 1926, it took on mythic proportion. 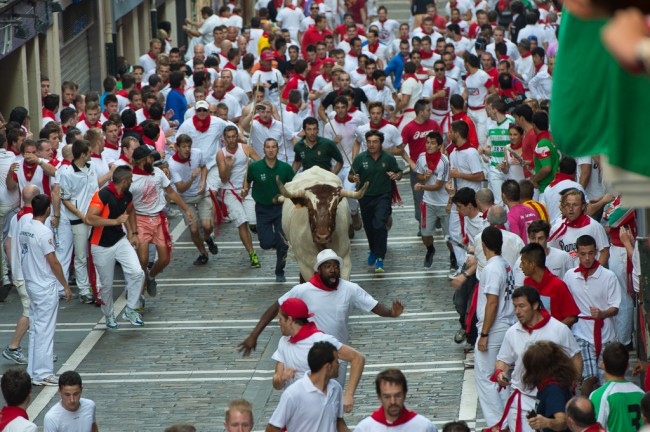 More and more, people arrived each July 6-14 and more and more dinero got rung up in the Pamplona cash registers. 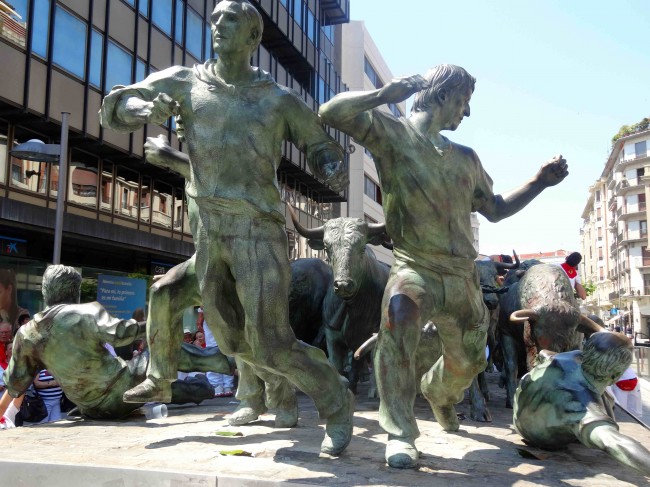 And, then, from many people’s perspective, it got out of hand. 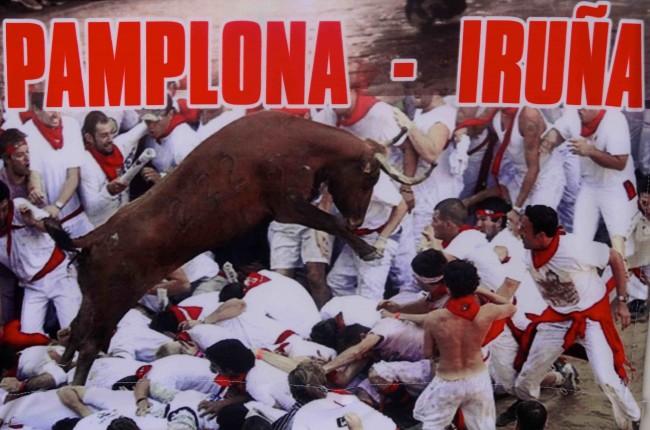 It’s easy to wag one’s finger at a festival defined by the word “encierro,” or “to fence in, lock up, or shut in” and a fiesta that ends in the public execution of animals. I’m sure if this were truly “whack-a-mole” or “whack-a-bunny” with cuddly rabbits getting bludgeoned to death there would be more universal outrage (this sentiment led to the end of foxhunting in the UK). But, somehow the bull, as exemplified by the fact that we have a naughty phrase about its excrement, doesn’t engender as much affection. In fact, one writer suggests the bullfight “elevates it from being a grubby and dumb beast into a performer in a piece of beautiful, arcane theatre. To put a bull into a bullfight is to ennoble it…into a creature worthy of being watched by an audience of thousands.” 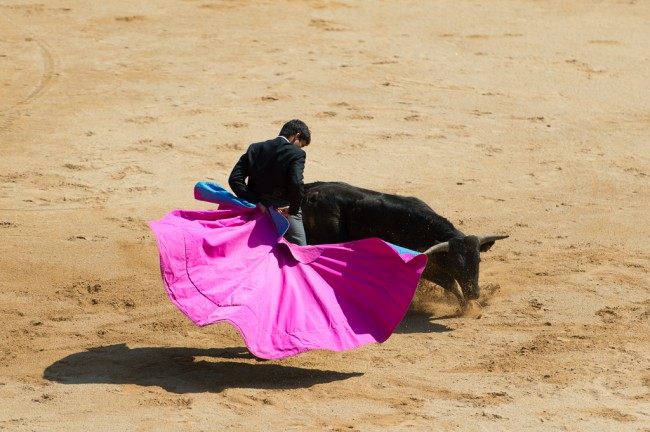 Some see a bullfight as a heroic ballet of man versus beast; others see it as a barbaric act. For me, what started to become very clear was something architect David Rockwell wrote in his book, Spectacle, about the world’s greatest festivals, “They are spectacles that demand surrender, not spectatorship. They ask that we consent to their movement and sound, to new hungers and transgressions. Immersion in them becomes a joyous forgetting: of self, of society, of the laws that normally constrain our activities.” Within a couple of hours in Pamplona, I felt swept up and beaten up by the fiesta fever. I surrendered.

This is not an event you can ignore and, having been to a few Spanish festivals, I wanted to learn why Spain had such a fetish for spectacles like this, so I asked my friend Roman Gonzalvo, editor of the Journal of Transpersonal Research, who met me in Pamplona, why Spanish culture is so festival-driven.

Pamplona is a proud, strong-willed city with a commanding view of the Pyrenees mountain range. It’s been the site of numerous epic battles from the Romans to the Vandals, Visigoths and Moors before Charlemagne staked his claim. Fiesta de San Fermin represents locals’ opportunity to celebrate their heritage through a series of conquerors that have tried to change their ways. It’s not surprising that so many locals turn a deaf ear to the cries of animal cruelty as they’ve clung to their rituals through the reign of the French and Franco. 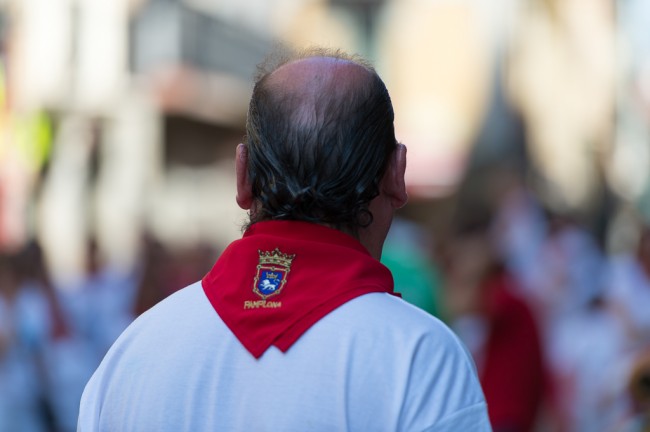 Hemingway wrote, “Aficion means passion. An aficionado is one who is passionate about the bullfights.” Pamplona is full of aficionados. So, I settled in and decided to have an open mind about my visit to San Fermin. And, as soon as I abdicated my role as cultural commissar, I got panicky as I looked around. Everyone was dressed alike! It was time for me to make my way over to the San Fermin section of the local department store and purchase and don my required wardrobe. 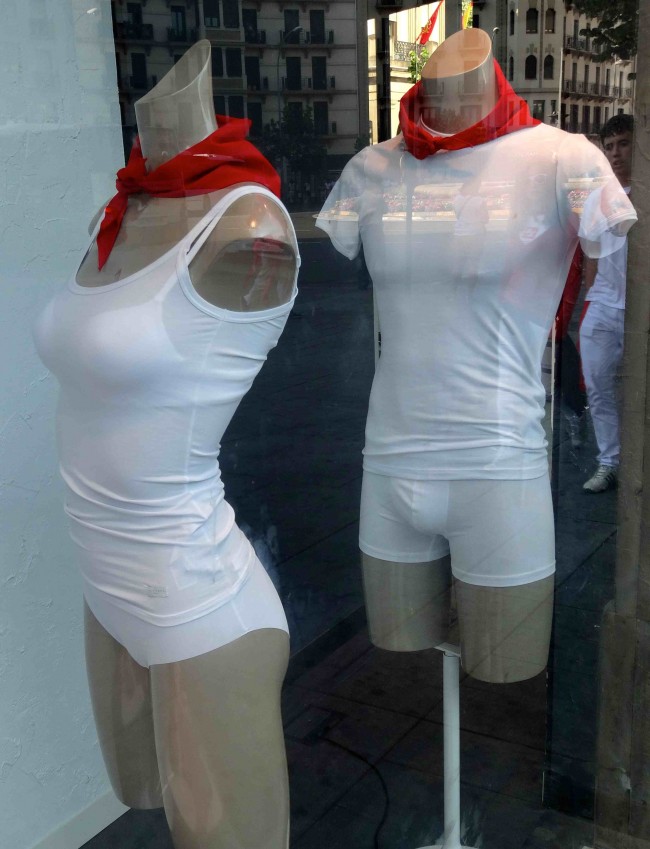 The white pants and shirt honor the city’s patron saint, San Fermin, and symbolize his sainthood and the red sash and kerchief represent his martyrdom. He was beheaded…the bright red kerchief being a reminder of this. I just kept thinking white is a very strange dominant color for this event since it’s so messy and people keep wearing the same clothes over and over and sleeping in them as well. But, I guess if I’m not going to be the cultural commissar, I can’t be the fashion police either. As my soon-to-be-friend and Airbnb host Mikel told me, “Just have a good time!”

And, so I strapped on my smile, stepped into my reveler spirit, and moved from my conscience to my curiosity over the next few days. 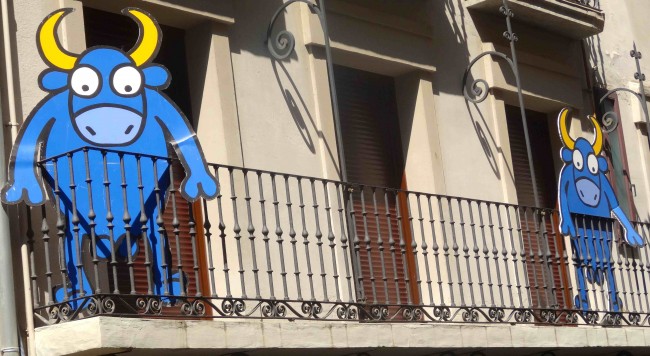