It’s amazing what a collection of daredevils will do to compete for an 8-pound circle of cheese. I had never heard of Kenny Rackers, or the American Cheese Racer, before I made it to Cooper’s Hill. This 27-year old former Army soldier saw this annual British event as a means of inspiring people to pursue their dreams. This video outlines his belief that winning the Cheese Roll could propel a million other people to become their own dream catchers, hopefully in a more sane and safe way:

Kenny won the first race of the day looking like a superhero flying down the hill. 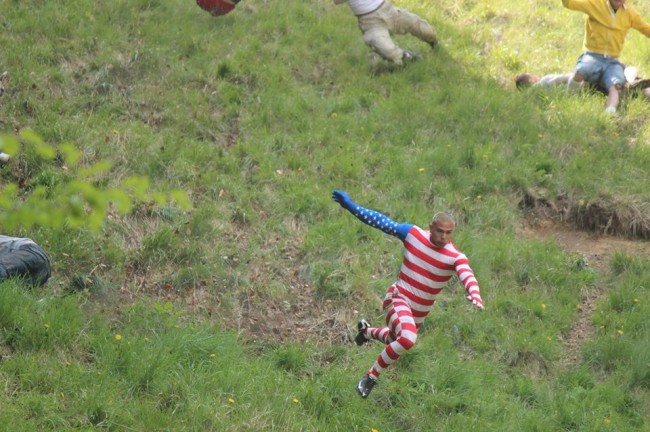 And, then he went on to win the run up the hill as well. This was the first time in modern history that a competitor had won both the downhill and uphill competitions. 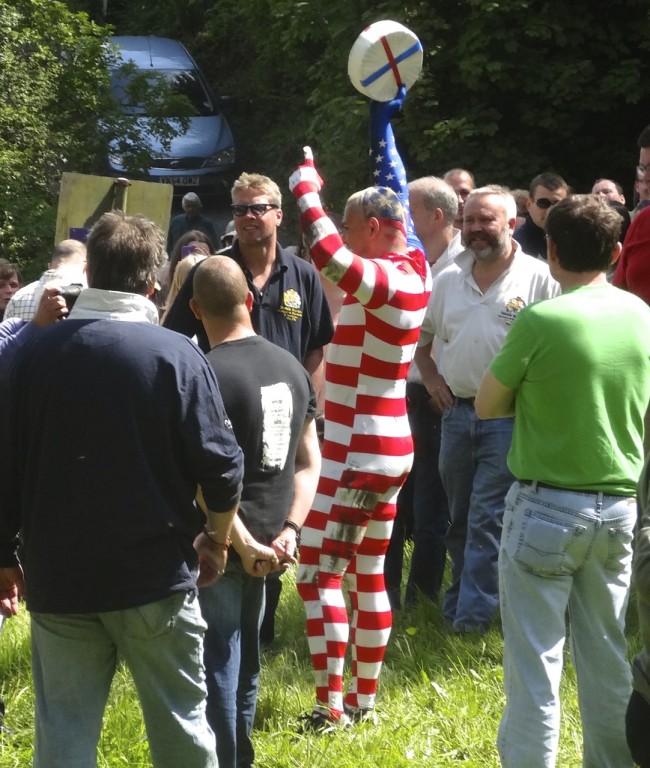 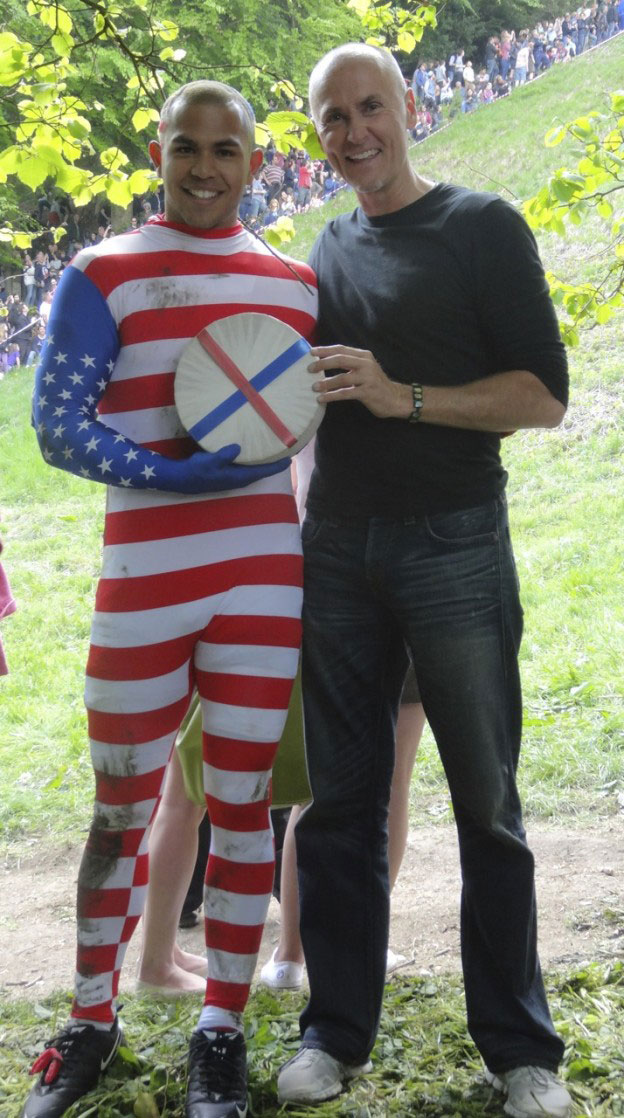 I had to fight off a few folks to get a private interview with Kenny (the American accent helped) and I look forward to supporting his cause:

Local Lucy Townsend, just 16, was the winner of the women’s competition, but she had a nasty spill that left her with a bloody welt on her hip. You wouldn’t know it from the way she celebrated with her mates. 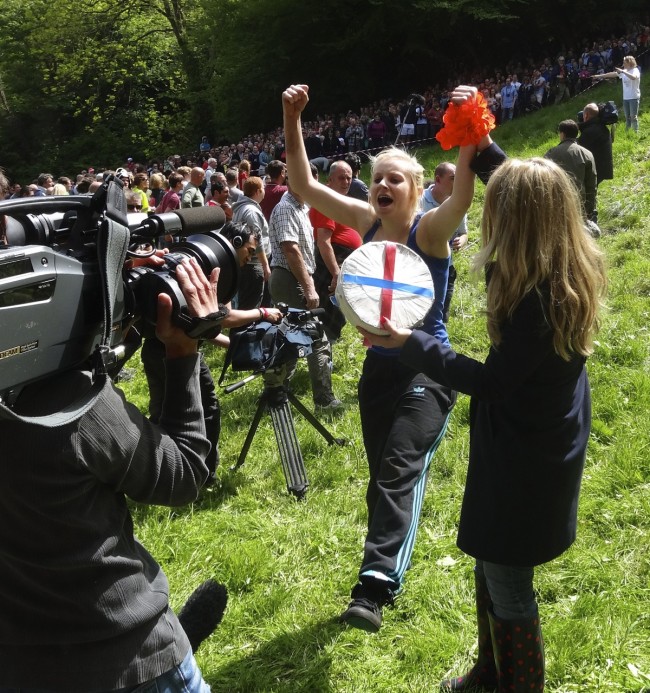 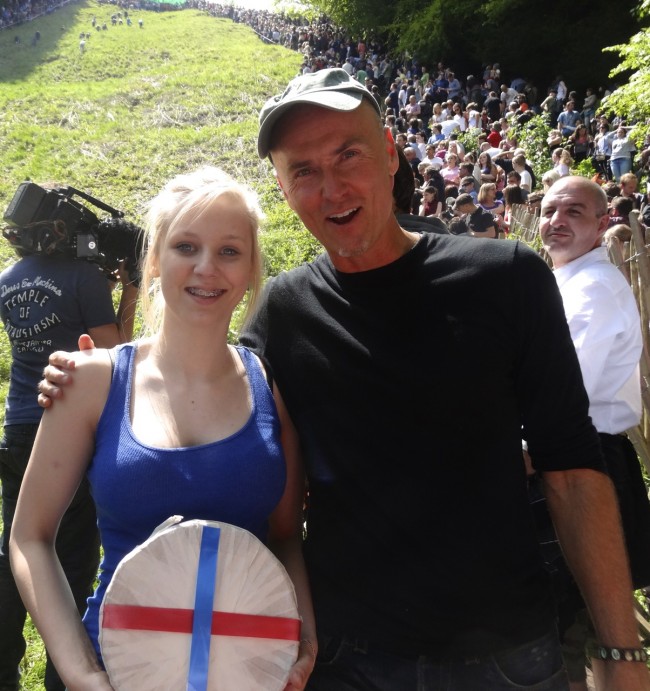 Of course, it’s a thrill seeing people run down the hill, but it’s even more exciting that this event is small enough that you get to meet a few of the winners. My friend Francis and I were able to spend a few minutes with 23-year-old local Ryan Fairley who won another one of the men’s competitions and was quoted in the paper as saying, “I don’t even like the cheese to be honest with you.” It was his sixth year running, but his first win. 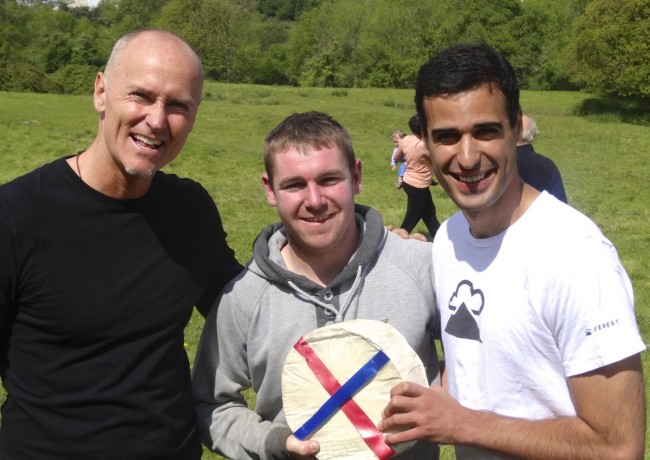 It’s not easy capturing the fast movement with a simple Sony camera that’s smaller than the palm of my hand. But, this short video gives you a sense that, for all the competitive athleticism being exhibited, there’s also a sense of fun as well:

The Japanese ninja, Tomoaki Tanaka (almost 40!), who flew all the way from his home country, barely won one of the final races and we got to give him congratulations post-race. He already looked dry-cleaned considering he fell down hard three times in the grass, brambles, and nettles during his trip down the hill. 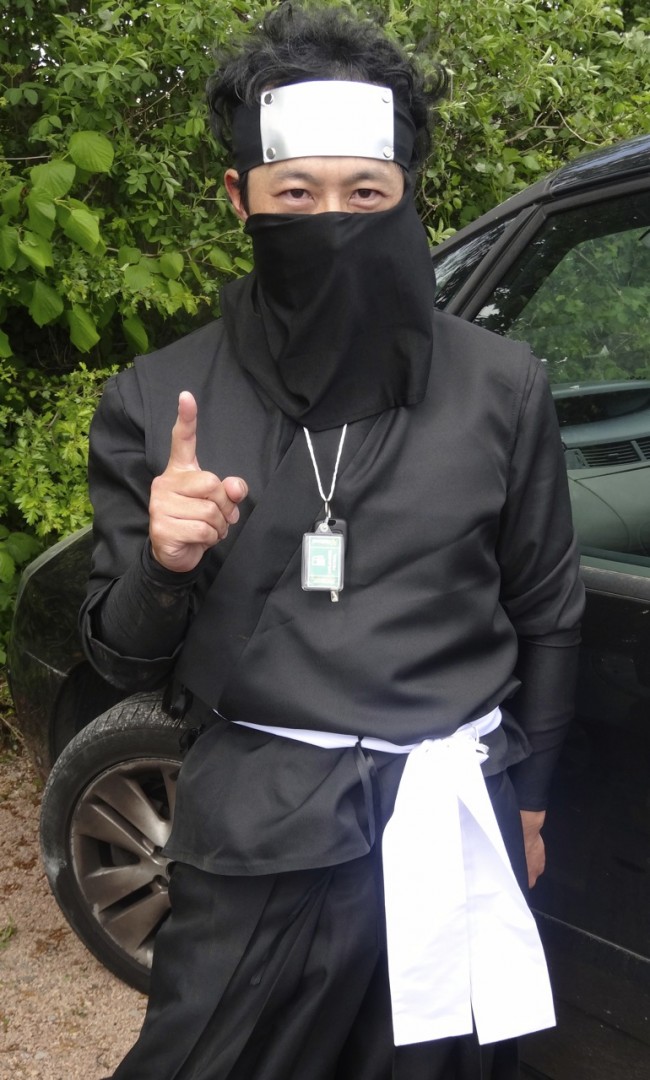 The winner of the second men’s race, Australian Caleb Stalder, was quoted in a local paper saying, “You can’t control yourself whatsoever so it’s a case of rolling down and seeing where you end up.” Maybe that’s part of the age-old appeal of this raucous, bizarre event. It’s all about resilience and an ability to somersault through life no matter which mogul catches you unexpectedly.

After a few races, I was starting to regret that I hadn’t done a last minute entry (it’s free as is attendance) in the roll. But all it took was one major ankle injury for me to appreciate that someone whose age matches the number of cards in a deck isn’t playing with a full one if he rambles down Cooper’s Hill. 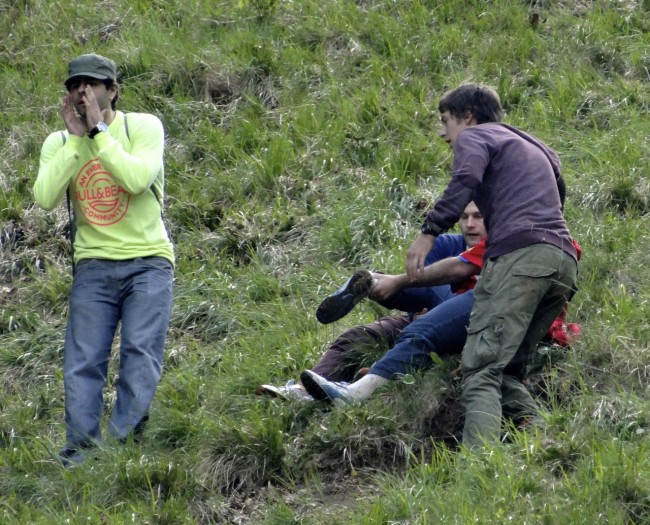 Here’s a wonderful video recap of the day’s races including the last one. Hide your eyes when you see how twisted this poor guy’s ankle is after a bad fall: