Mexico is a multi-faceted country with many different flavors of festivals to offer locals and visitors alike. Whether Día de los Muertos, Genius Loci, or Vive Latino come to mind when considering festivals to visit in our Central American neighbor, you've got an array of experiences from which to choose. One music festival that should be on any festival-goer's Mexico hit list is Corona Capital, which rivals many large-scale, mainstream music festivals in North America.

Since 2010, Corona Capital has delivered the biggest musical acts in the world to its audience, which comes from far and wide to see all of their favorite bands in one place: the massive Autódromo Hermanos Rodríguez. Unlike many music festivals in Mexico, Corona Capital – which is produced by OCESA, an entertainment and media company based in Mexico City – has the clout to attract powerhouse artists from the United States, the UK, and other foreign countries that don't often make it to the festival's home country. Peep Corona Capital's star-studded 2017 lineup below to see what we mean. 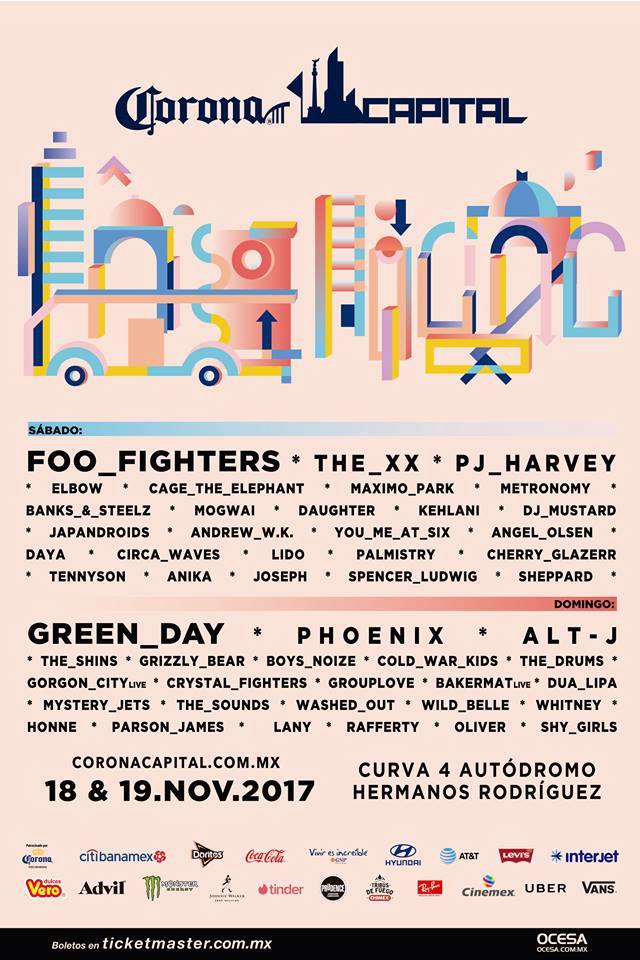 The Foo Fighters, The xx, the incomparable PJ Harvey, Cage The Elephant, Green Day, Phoenix, alt-J, The Shins, Cold War Kids...the list of heavy hitters goes on an on, right into the small print. Not only is the lineup diverse by country of origin, it also represents a large swath of popular genres. There's something for everyone. And when the sun sets, you don't have to stop boogie-ing. There are after parties galore all around town, at many designated venues where acclaimed DJs drop hot tracks all night long.

And of course, no one goes to Mexico City without wanting to sample some of the best local food. Capital Gourmet offers food truck fare and tasty dishes from a hefty handful of local restaurants to help you refuel. There are a wealth of options to choose from whether you’re an omnivore, vegetarian or vegan. While you’re busy scarfing down Mexico City’s delicious cuisine, you can still enjoy your favorite music acts without leaving your spot at Capital Gourmet.

This article was produced in collaboration between Everfest's editors and Corona Capital.