Coachella's Do LaB stage is now in its 14th year and, in that stretch of time, it has become iconic. Thanks to its unique design, incredible lineups full of avant-garde names, and its singular vibe, the stage is considered a haven of inclusivity and connection that often feels like a stark contrast to the rest of Coachella's vast festival grounds.

This year, Do LaB will welcome world-class house and techno sensations like Behrouz, Thugfucker, Moscoman, Chris Lake, Lauren Lane, John Monkman, and Sage Armstrong along with epic back to back sets from Dirtybird staples like Ardalan b2b Sacha Robotti and Christian Martin b2b Worthy, plus a standout performance from the label’s newly launched golden boy, FISHER. Do LaB will also shine light on the more experimental sides of electronic music with genre-busting talent like EPROM, OSHI, Luca Lush, Yahtzel, and Brasstracks, plus performances by multi-instrumentalist live acts Brasstracks, Anabel Englund, Monolink, and many more.

Fans should also prepare for the unexpected. Do LaB has a history of surprising fans with unannounced sets from the industry’s leading names. Past surprises have included the likes of Skrillex, Richie Hawtin, Major Lazer, Bob Moses, Bonobo, RÜFÜS DU SOL, The Glitch Mob, and more. This year, attendees can expect a groundbreaking collection of unannounced artists to surprise even the biggest music nerds. 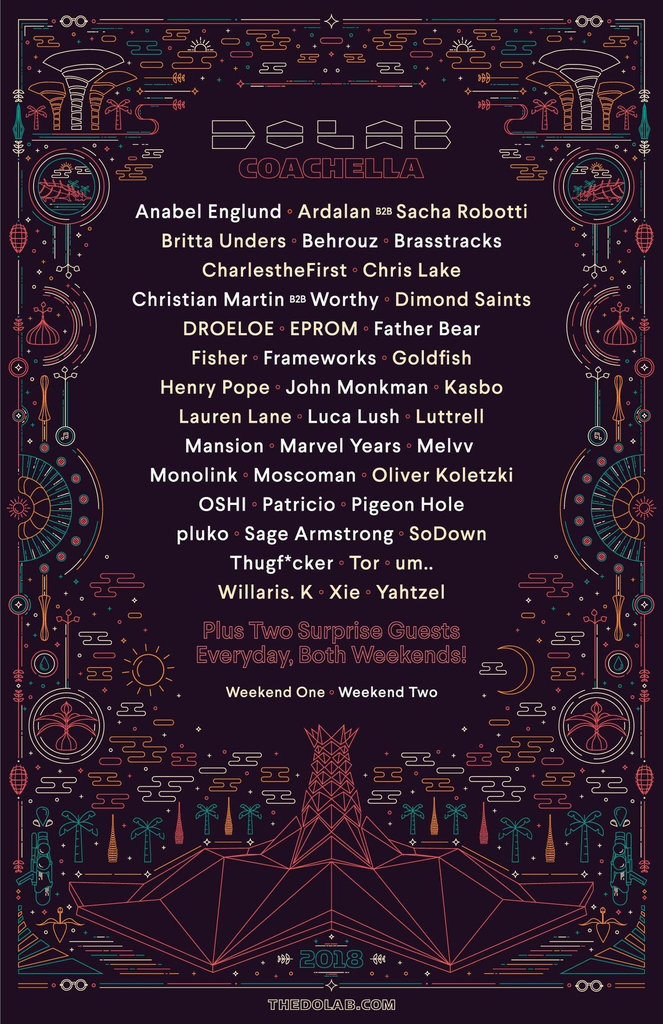 Photo by: Do LaB

The Beacon stage design, which debuted last year, will also be back. The Beacon is an architectural marvel, characterized by its vibrant colors (topped by what looks like a pineapple!) and extraterrestrial features.

Whether sitting under the shade of the Pagodas, losing yourself to the hypnotic sway of the Squigs or the video installation The Cloud, or dancing yourself silly in the shady embrace of Big Fish, the stage's ever-evolving design and unparalleled creative vibe at Coachella has touched nearly everyone on the famed polo fields.