My first year at Burning Man, I arrived late on Thursday, stayed for the Saturday and Sunday night burns, and got stuck in the exodus on Monday morning. Since then, I’ve arrived and left earlier (I do deeply miss the Temple burns on Sunday night). This year, I was able to snag an early arrival pass (you apply for one if you’re assisting with an art project or helping to build a camp) and my buddy Ping Fu and I arrived early Friday evening. 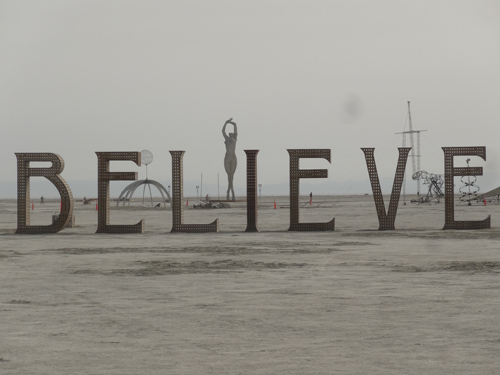 There are three noticeable differences in coming early. People are working more than playing. Unlike most of the week, the best time of the day is the light hours, when you can meet the artists while they’re constructing their art. And, the average age of those on the Playa is ten years older than what it feels like later in the week. 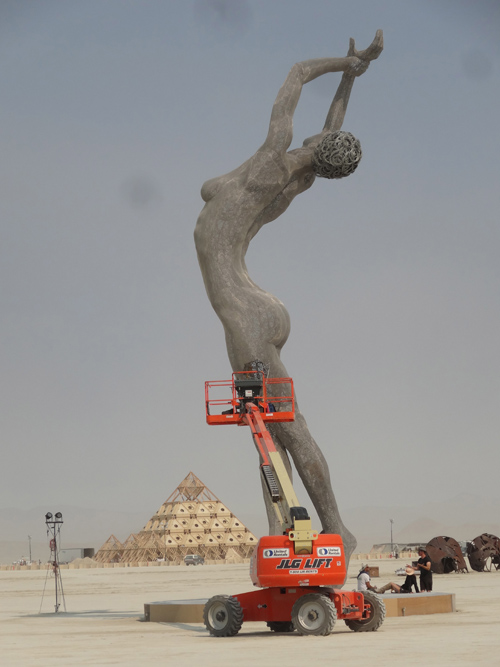 There’s also a lot more elbow room. You can play with the art or just quietly observe it for hours at a time. 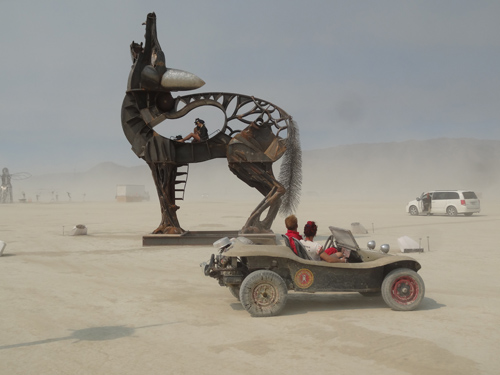 This howling coyote has a head that moves with the wind 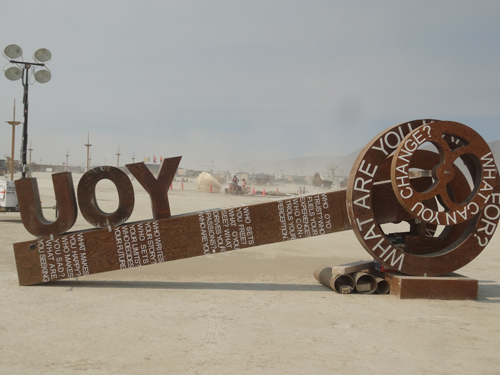 And, of course, you get to see how the Man is constructed. This year, he’s been given a particularly elaborate, otherworldly base. 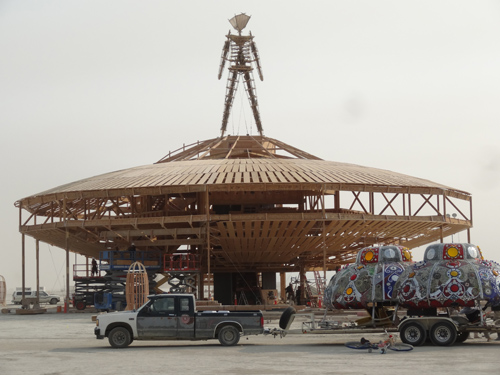 Be prepared for dust, but this is more due to the construction than the arriving autos. 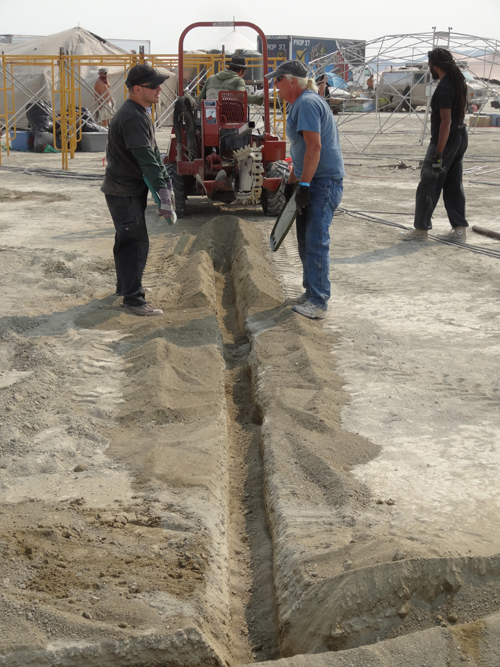 Upon arriving at First Camp (6:05 and Esplanade), we immediately started hearing about “Photo Chapel” so, after an early morning run, I ventured on my bike to find this particular art piece. During Saturday, I visited Mike Garlington’s work of art three different times. That’s the mark of a great piece of art. It’s addictive. Here’s a video of my first experience marveling at it all on my own…

Yes, I was chased out of the inside of the chapel by those still working on it, but over the next few hours, they could see I’d become an evangelist and I learned more about Mike and his work. 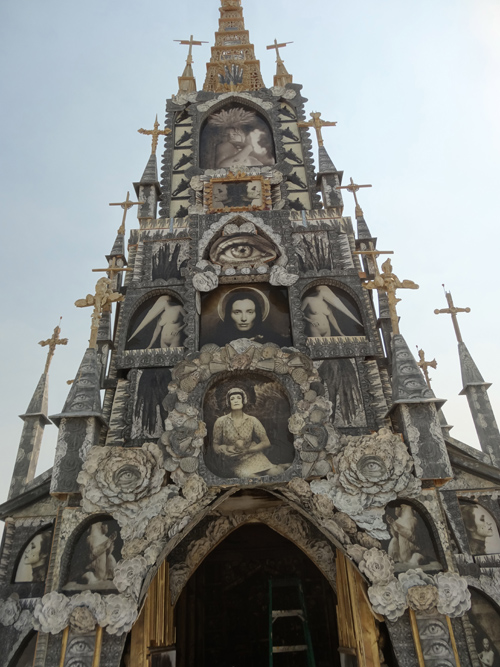 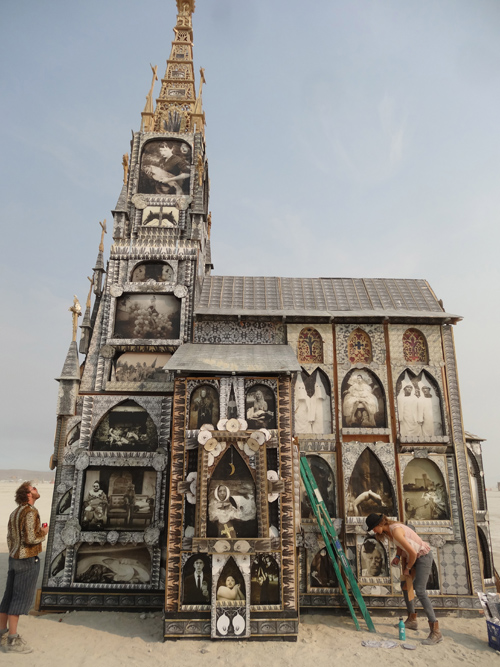 As John Curley writes in the Burning Blog, “Photo Chapel is the apex of many of Garlington’s artistic arcs – meticulous photographic printer, conceptual photographer, inventive framer, and DPW pirate. The chapel is the culmination of 14 years of image-making, with many of the photographs created during his annual two months in the desert, working alongside the vivid personalities in the DPW as they set up and take down Burning Man. His own van is also covered with his work. He used to do a lot of shooting in remote locations, and the beat-up van was his darkroom on wheels.” (To read more of John Curley’s perspective on Photo Chapel and some of the early photos of the work being erected, read it here.) 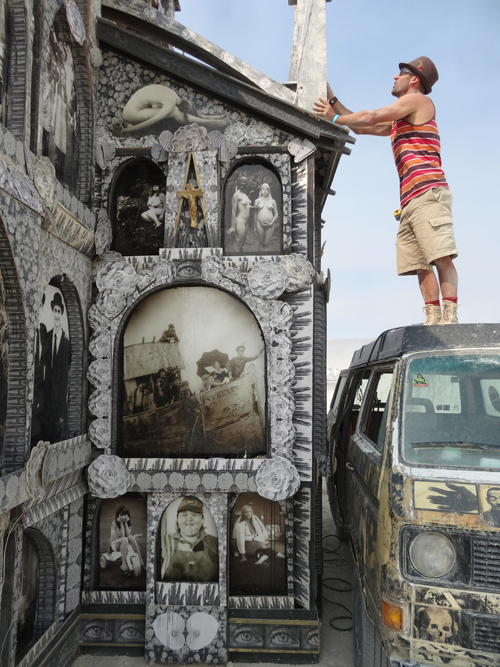 There’s a strong influence of death, sex, faith and the grotesque in Mike’s work. It’s a classic Black Rock City alchemy of the sacred and profane. Seeing so many shocking and luscious photos all in one place – plastered on a church in the middle of the desert – just makes you want to observe. I couldn’t stop staring, especially at the photos of the artist with his parents. And one particular photo of his grandfather, bedside with his dying wife. This is a very personal collage of photos from Mike. 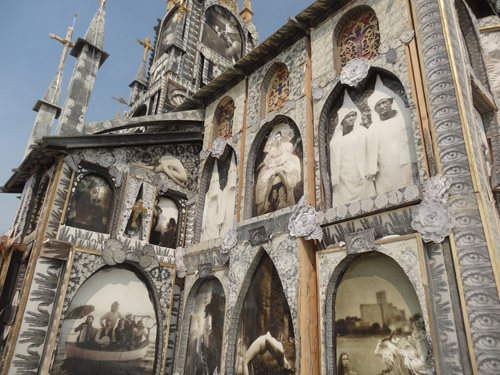 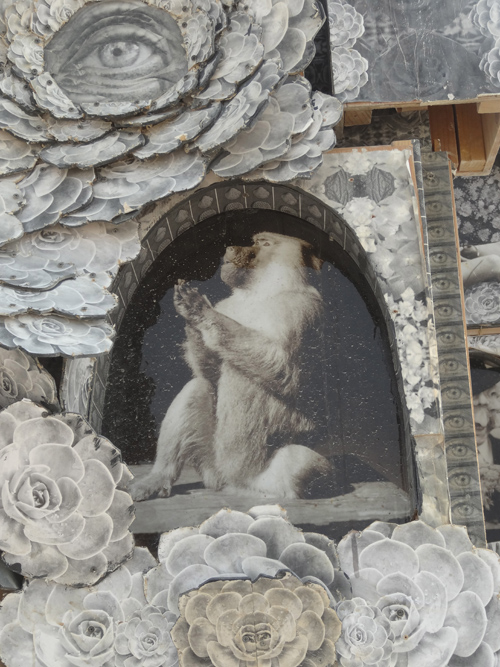 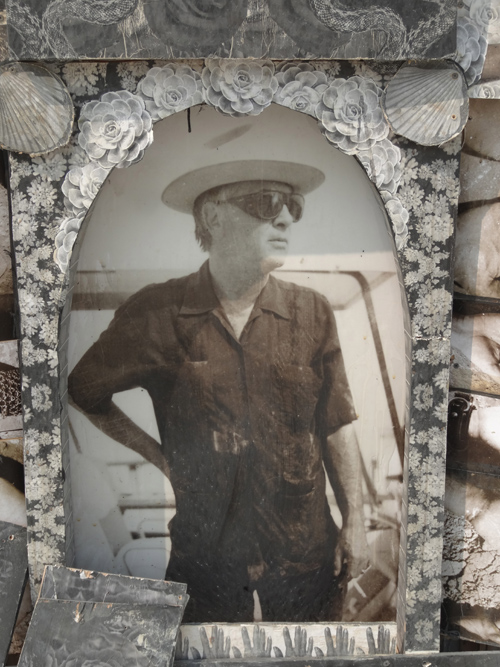 Being here early with the artist and his team made it easy to get caught up in the love for what they were doing. 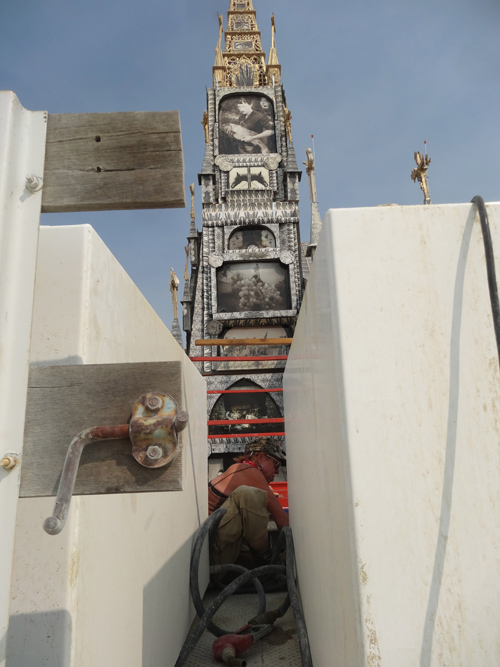 Finally, I got the opportunity to spend a few minutes with the artist, Mike Garlington. This video gives you a sense of how this burning church fits conceptually between the rawness of the Man and the sacredness of the Temple nearby on the Playa.

Being able to spend time talking with brilliant artists and designers is one of the collateral benefis of arriving at Burning Man early. Ping and I were able to spend some time with designer David Best who has created more Burning Man Temples than anyone else. It was heartening hearing his stories about the people who’ve helped him create the solemn Temple and what life circumstances – usually loss – led them to dedicating so much time and love to this annual ritual. 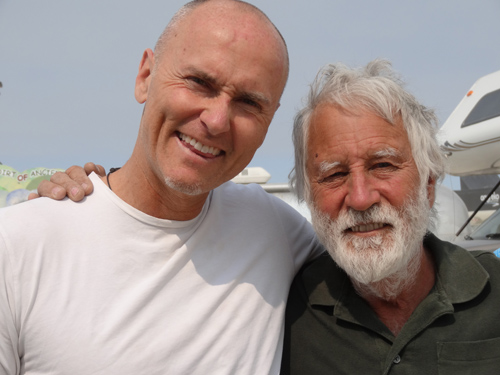 I have no doubt that Mike Garlington’s “Photo Chapel” will be the talk of the Playa this year and the crowds will be hovering around it 24 hours a day starting today when Burning Man officially opens. I’m glad I got my early time to commune and confess with this stunning piece of art. And, I’m thrilled to be staying in First Camp where we get fed so well… 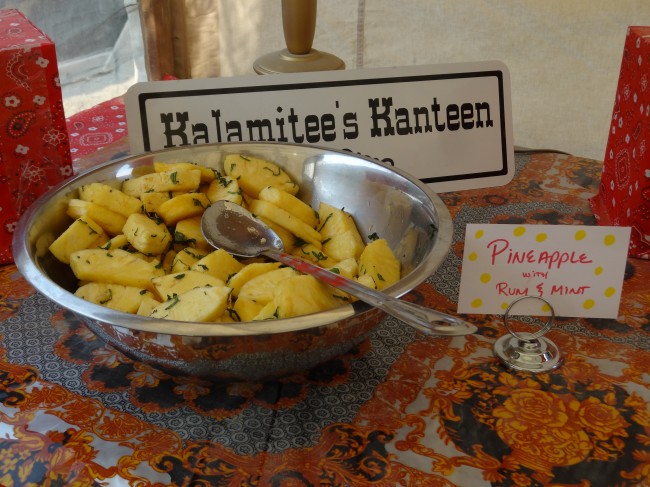 What a way to start the morning! Cut pineapple marinated in run with mint on top.