In my youth, my idea of a good poem was an off-color limerick. Then, partly due to Rumi, I was introduced to the transformative nature of a great poem. Poetry is foundational in many cultures around the world. In the Middle East, one of the most popular prime time TV shows of all time is “The Million’s Poet” with over 70 million viewers. In his eulogy for Robert Frost, President John F. Kennedy said, “When power leads man toward arrogance, poetry reminds him of his limitations. When power narrows the areas of man’s concern, poetry reminds him of the richness and diversity of his existence. When power corrupts, poetry cleanses.”

Rumi’s poetry cleansed the Seljuk people in what is now central Turkey in the 13th century. While the masterful architecture from this period can be seen all over Konya as well as the broader region, the Seljuk Empire was menaced with Christian invaders from the west and Mongols led by Genghis Khan from the east. This led to his parents fleeing and wandering all around Arabia until a sultan built a college in Konya for Rumi’s well-regarded scholar father. When Sufi philosopher Ibn Arabi first saw Rumi walking behind his father, he exclaimed, “Glory be to God, an ocean is walking behind a lake.”

Rumi’s father died two years into his teaching assignment and, at age 24, Rumi took over this vaunted position and immediately made a name for himself as a philosopher. But, Rumi’s reputation spread even wider when he started channeling profound, divinely-inspired poetry that resonated both emotionally and spiritually with a wide audience. So wide an audience that there’s now a large museum dedicated to Rumi (that used to be the Mevlana Dervish Lodge) in central Konya with one of the largest mosques in town next door (both are pictured here). The gift shop of the Mevlana Museum is one of the best places to find great gift items relating to Rumi and the Whirling Dervishes (by the way, the bottom picture above is taken from the delicious restaurant called Deva).

My poems resemble the bread of Egypt – one night
passes over it, and you can’t eat it anymore.

So gobble them down now, while they’re still fresh,
before the dust of the world settles on them.

Where a poem belongs is here, in the warmth of the chest;
out in the world it dies of cold.

You’ve seen a fish – put him on dry land,
he quivers for a few minutes, and then is still.

And even if you eat my poems while they’re still fresh,
you still have to bring forward many images yourself.

Actually, friend, what you’re eating is your own imagination.
These are not just a bunch of old proverbs. 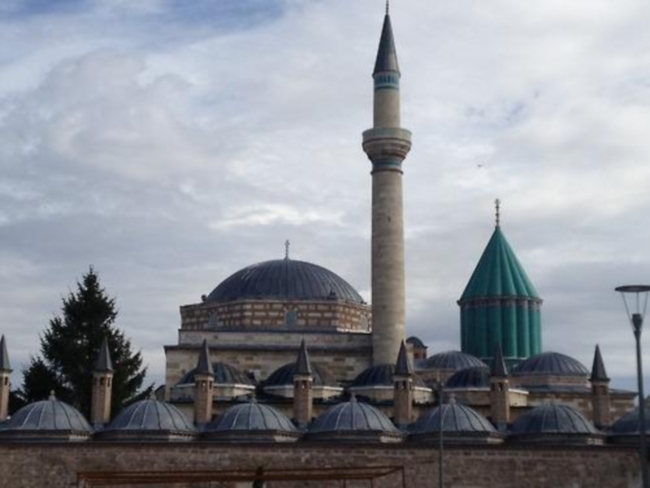