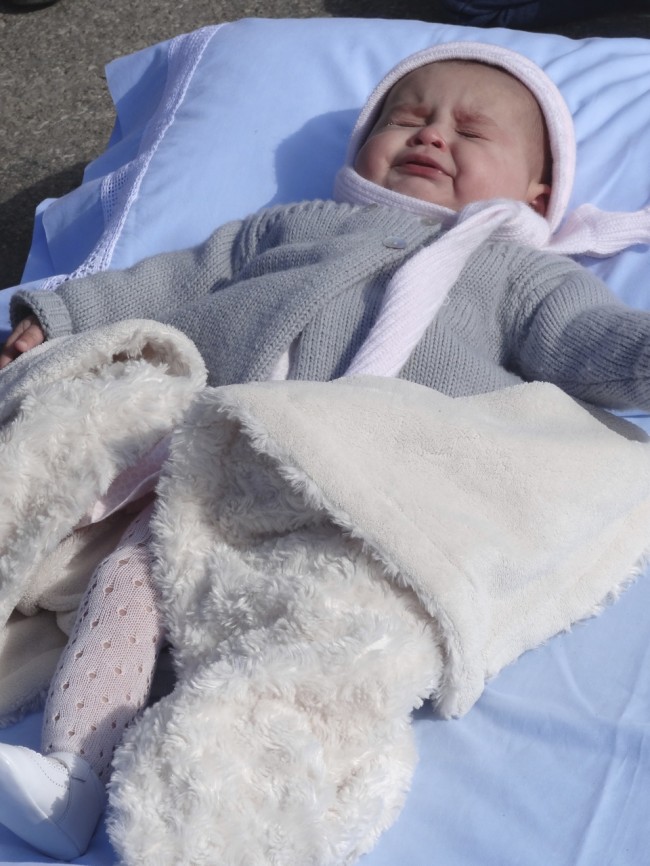 In fact, even a few of the adults are having second thoughts. This guy just stood there with his stroller, paralyzed, coming no closer to the action. He didn’t move for 15 minutes. I thought he might be a sculpture. Maybe he was having post-traumatic stress memories from his childhood… 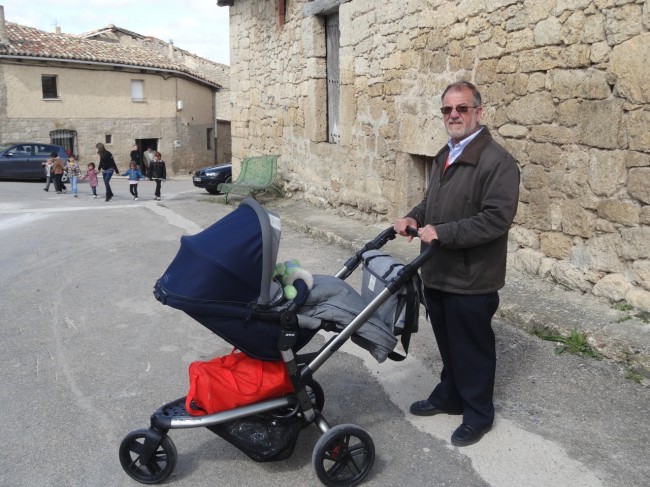 And, here’s a young one who just caught a glimpse of the tackily-attired yellow devil they call “El Colacho.”… 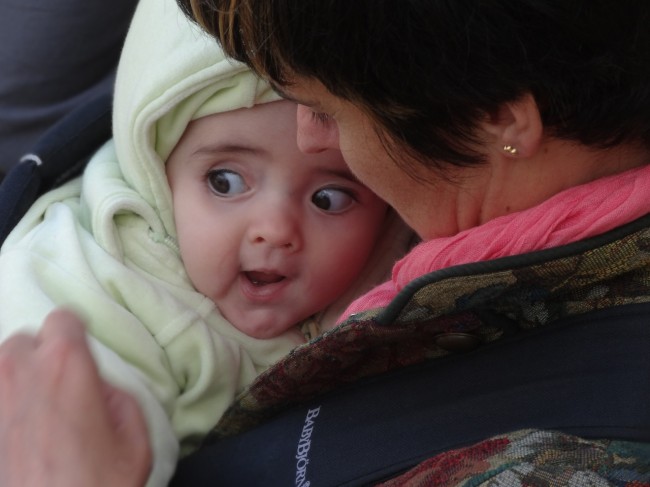 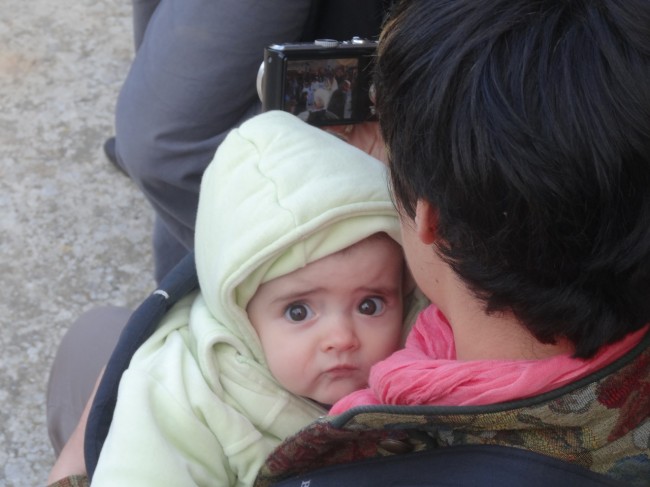 “Help…please call the United Nations or the Pope.”

The Catholic Church has shunned this festival. But, this hasn’t stopped the local Priests and congregation from making this a foundational part of their church culture for nearly 400 years. While there are only a few hundred gathered for this wacky endeavor, some international press are on-hand, and some of the young stars have already taken a liking to their celebrity. 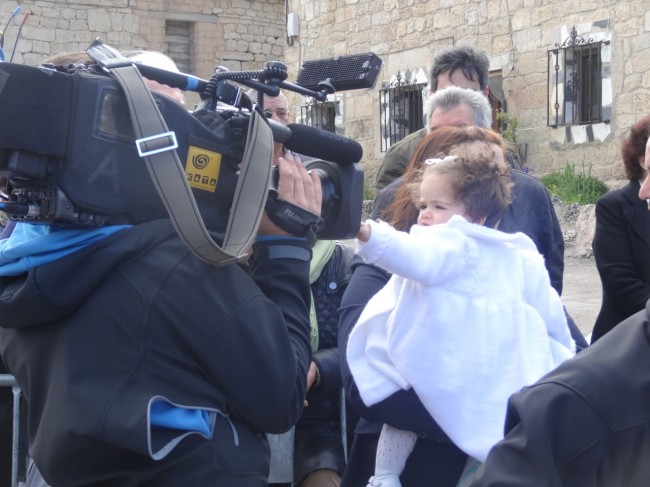 The church bells ring as everyone files out of the massive chapel to the nearby town square where families have dressed their toddlers in their Sunday finest for the devil’s jump. 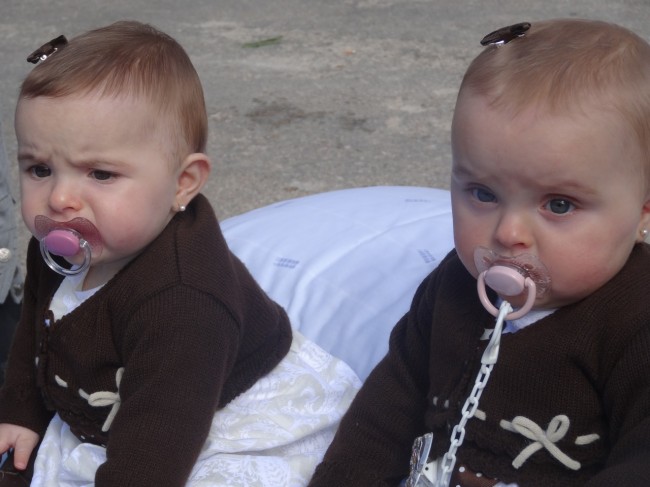 This five-minute video gives you a first-hand vista of just how the baby jumping begins:

Over the course of the next ninety minutes, those attending will witness such an odd tapestry of cultural components. With each of the skinny streets filled with home windows of flowers and linens waving in the breeze, there are teenagers dressed in lederhosen that look to be dancing an Irish jig as a means of distracting the garish El Colacho. 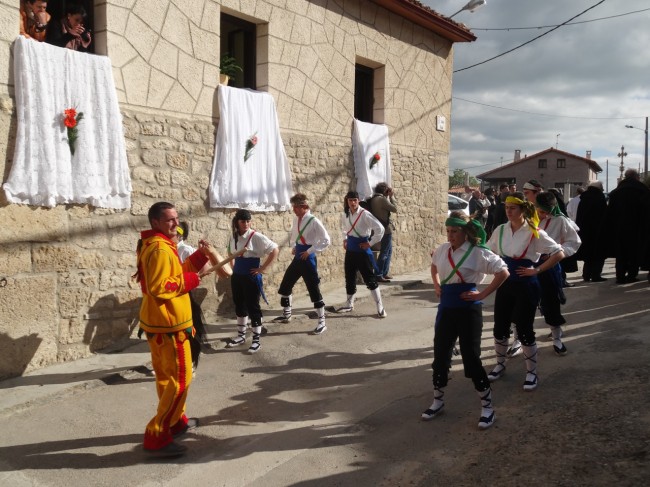 There’s the clergy and lay leadership dressed like mafia gangsters. And the guys carrying huge flags that dangerously, occasionally, get caught in the electrical wires as they try to make sure their flags touch the faces of the infants before El Colacho jumps. The priest, not cracking a smile, acts as if this whole experience is part of what they taught him in seminary. He blesses the babies after the devil has taken away their sins with the jump.

Then there’s the church choir in lock step behind the priest singing Gregorian chants and hymns. And youngsters who not long ago were lying on those mattresses themselves – this time dressed as if they were going to their own wedding, dropping rose petals on the babies after they’ve been blessed. And, we can’t forget the other priest who is widely swinging the thurible (incense holder) over the kids. I was worried he was going to sock someone in the jaw with this holy canister. 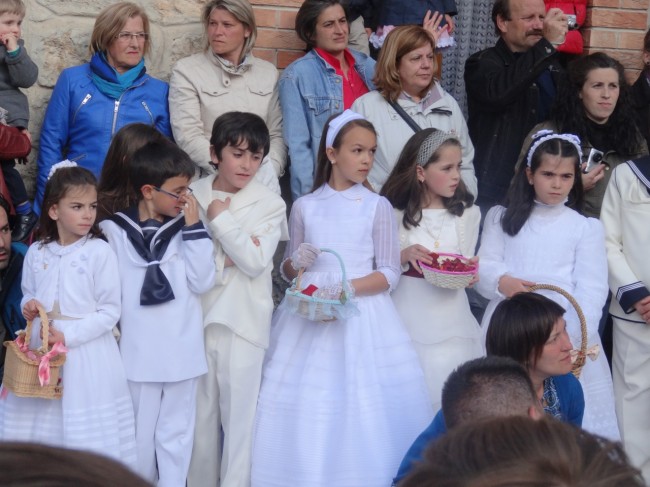 But, the real stars of the show are the kids on the mattresses, most of whom are truly good sports just marveling at all of the colorful distractions. As many as eight babies are lined up perfectly, waiting for their community christening with rarely a shriek or scream. In fact, the parents look more nervous than the babies. 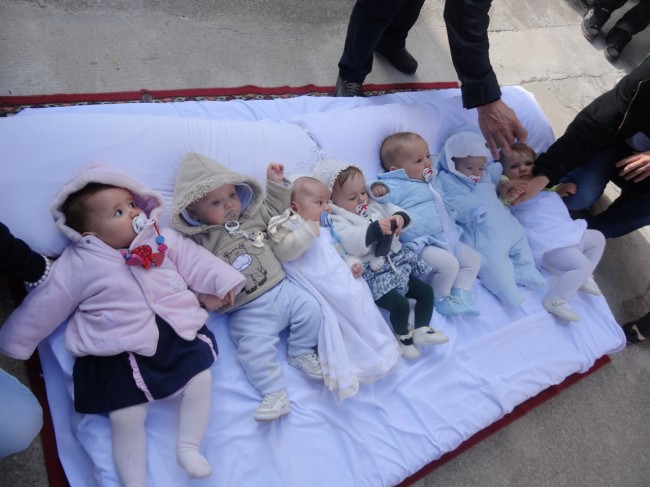 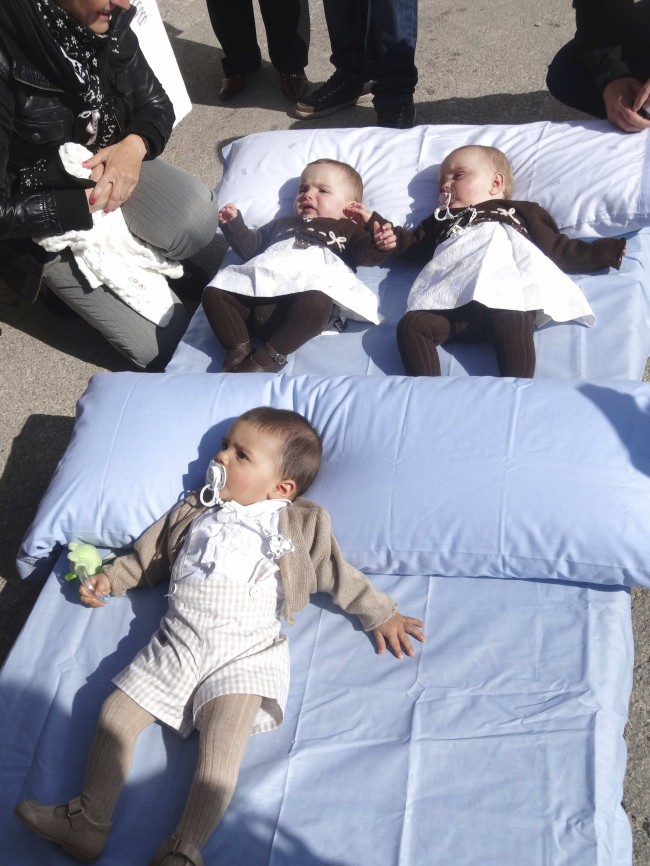 And, then, the two Colachos get themselves prepared for their momentous leap (or, many leaps as this procession goes on throughout the village with more than 15 mattresses scaled by the devils in 6 different locations). 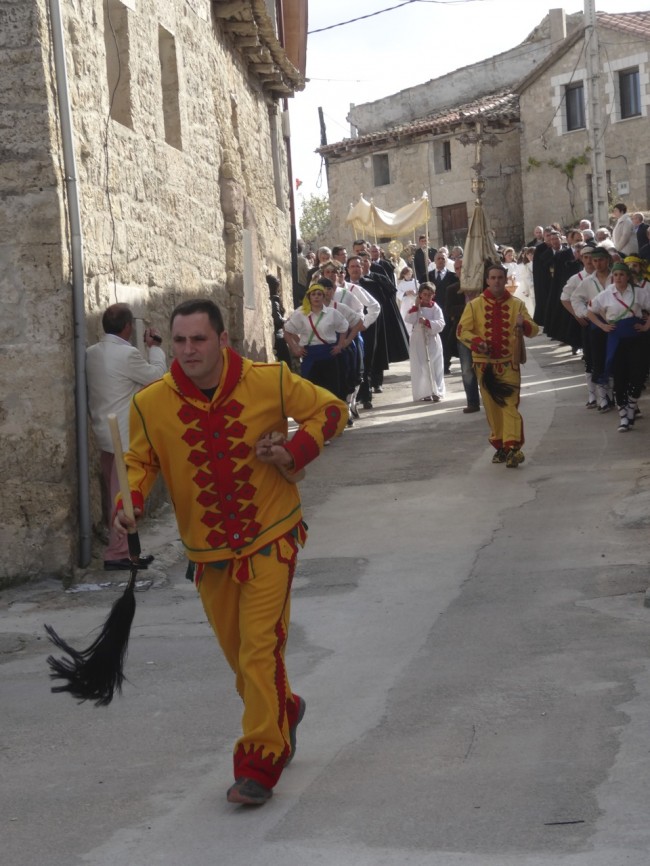 Then, time stands still. Everyone holds their breath, hoping that both of the Colachos have been practicing long-distance jumping. And, it’s not easy because there can be as many as three mattresses in a row to jump. 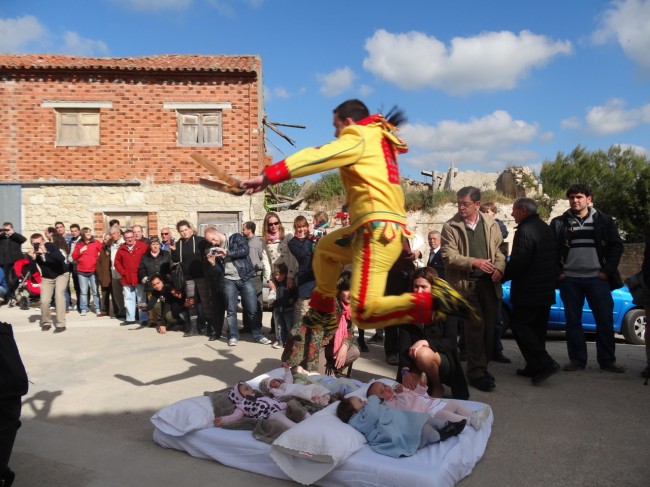 Unfortunately, the second Colacho either had a little too much to drink that afternoon or hadn’t gone to Colacho jumping school, as he would, on occasion, do a half-hearted, half-jump across the width of the mattress. 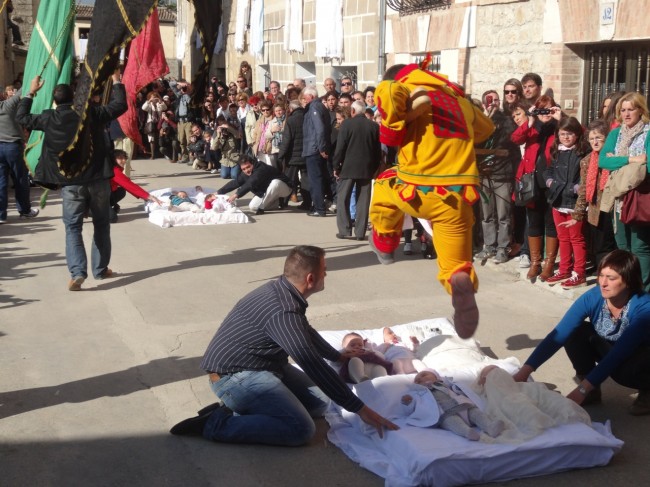 As I watched this spectacle, I could feel how this festival was a bonding experience for everyone in the community, a positive version of a fraternity hazing as you can see it in the eyes of the young ones who aren’t that far removed from being on the mattress. Look at this boy on the sidelines who looks like he’s ready to become horizontal again… 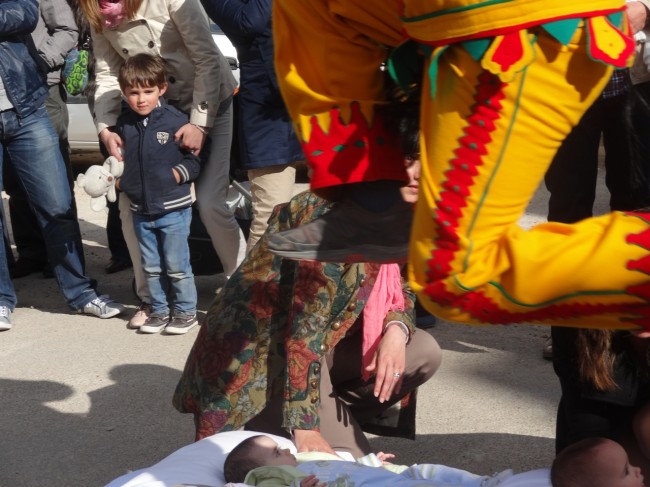 Afterwards, with petals all over them, the babies seem relieved, but the parents even more so. 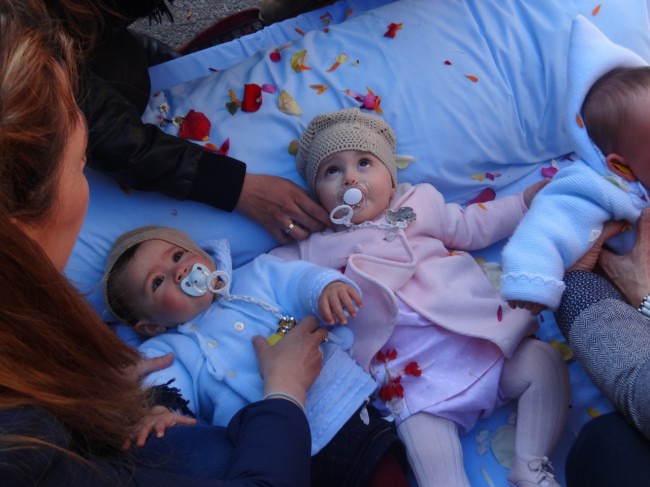 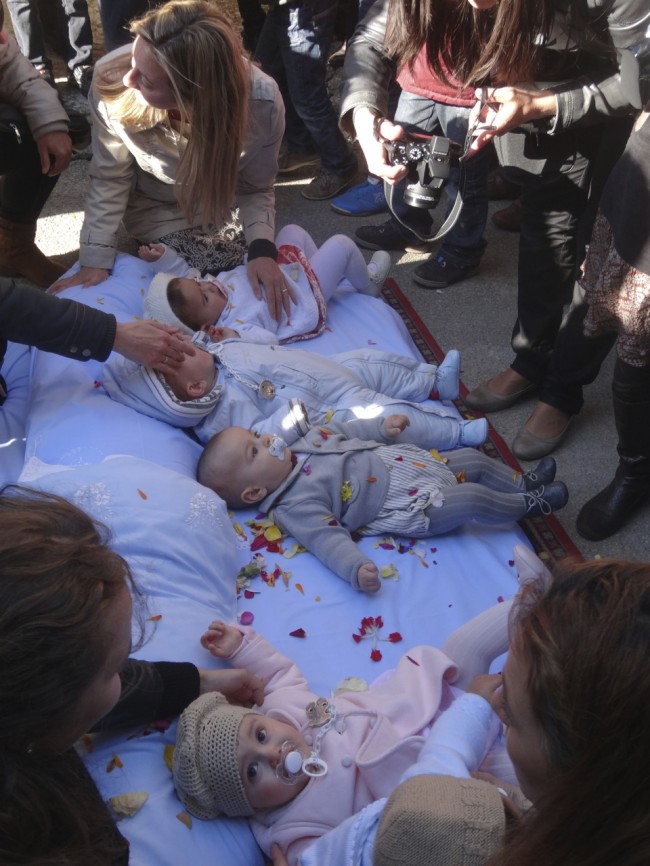 But, one thing’s for sure, as evidenced in this little girl’s face, “I only want to do this once in my lifetime and please don’t let El Colacho take me home with him.” 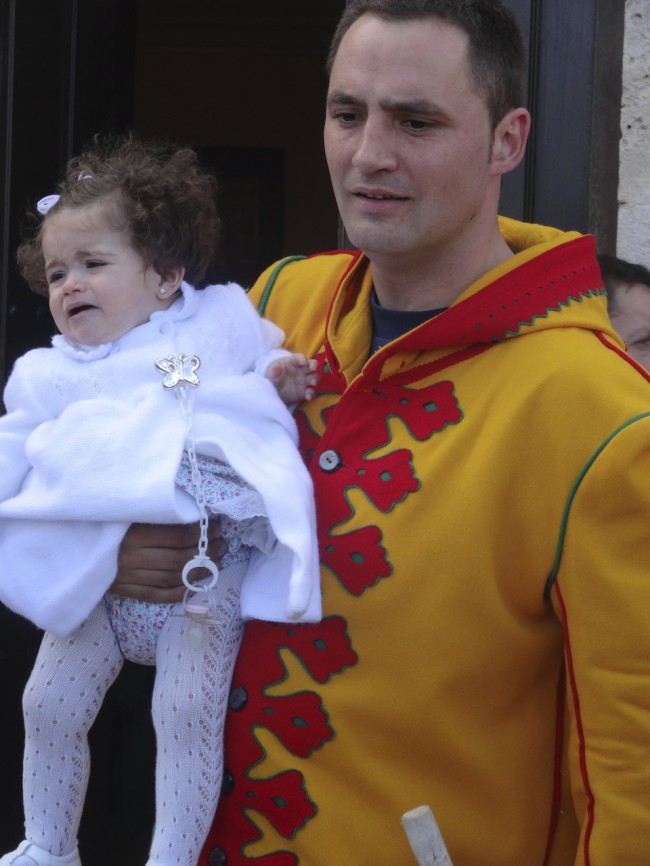