Festivals are officially taking over our cities, no matter where you are in the world. From happenings that dominate major U.S. cities – like Miami's Ultra Music Festival or Detroit's Movement Electronic Music Festival – to Europe's many colorful, urban music festivals, we love the opportunity to commune without our fellow festival-goers without having to jump on a train, bus, or even plane to a far-away field in the middle of nowhere. And of course, attending a music festival is one of the best ways to get to know the foreign city you're in.

Whether you’re looking to dance all night to the hardest local techno, join a float at a carnival, or have your consciousness expanded with mind-bending art installations, this list of Europe's best urban music festivals has all you fun-seekers (whether you're a local or a traveler from across the pond) covered for the entire summer.

Few festivals can claim to truly unite an entire city, but the 200,000 performers, dancers, artists, spectators and spacemen that descend on Brighton in the UK over Pride ensure the south coast city is an exception to the rule. The UK’s biggest pride festival is a multi-faceted, rainbow flag-toting phantasmagoria— from the Community Parade with its floats and whistles and never-ending stream of chiseled torsos, to the Pride Festival on Preston Park that will see the likes of Fleur East and DJ Fresh play this year. Things can get a bit crazy on the Saturday so leave your dogs and claustrophobia at home. Speak to the locals and they’ll tell you Sunday is the best day, with fewer bodies taking up boogie space around the streets' many booming sound systems.

May Day began over a century ago as a celebration of the rights and achievements of the German working class. After clashes between left-wing demonstrators and police on the streets of Kreuzberg in 1987, the event took on extra frisson and the annual festivities have since been marred by occasional unrest since. Regardless, the Berliners refuse to let anything get in the way of a good party and this year will mark the 14th Mayfest that still packs the streets of Kreuzberg 36. Expect crowds drinking beer for breakfast, twanging sound systems, street performers and WTF installations, plus one-off parties from the area’s many clubs and parks overrun with cool, inebriated Berliners and foreigners.

Swingamajig is organized by the open-minded love captains behind Shambala . Unlike its field-based forefather Swingamajig takes place in the shadow of Birmingham’s vast brickwork arches with six stages, a Big Top tent and a penchant for all things swing and vintage. There’s a wealth of acts playing to keep everyone jitter-bugging to the early hours, from twinkle-fingered turntablist JFB to the Electro Swing Circus. There’s also cabaret, art installations and more sharp suits than you can shake a fascinator at.

East London’s Lovebox used to take place over three days, but in recent years has trimmed to two. Fortunately, its lineups are as stellar as ever and this year sees a dance-focused array of names topped by Major Lazer and LCD Soundsystem. As yet it’s the UK’s only festival with James Murphy’s indie-punk-dance pioneers, so it's guaranteed all those present will royally lose their sh*t to "Losing My Edge." If you’re looking for an after-party you couldn’t be better served, with London clubs XOYO, The Laundry and Oval Space all within a post-festival power walk.

For several years South East London has cultivated a music scene representative of the area’s multi-ethnic, ultra-creative population, and Peckham Rye’s inaugural festival brings these different musical clans together. The Friday will see a number of free-to-enter music production lessons at the Bussey Building, while Saturday will see music, parties and serious dancing from 1 pm to 6 am Sunday. For the those with clear heads and/or impressive stamina, Sunday hosts a more lowkey offering with artists playing alternative and influence-based sets, before the pace picks up again as the sun goes down. Expect the best in underground grime, garage, bass, house, techno and everything in between.

An afternoon spent at Europe’s biggest street festival is a chance to experience London’s ethnic plurality in all its booty-shaking glory. A million smiling souls descend on Notting Hill’s streets every August for a sensory bonanza led by the city’s Caribbean population, with the soca and reggae-playing floats as the focal point. Explore further out into the streets and you’ll track down the best parties, with sound systems hammering everything from reggaeton to jungle to funky house and bass. It does get very busy and it’s easy to get lost in the sea of bodies, so go with a squad and keep everyone close. Oh, and if you don’t want to get ripped off with £4 Red Stripes, buy your beers before you get there.

Other than SXSW in Austin, Texas, The Great Escape is the world’s preeminent festival for discovering new and emerging music. This year is no different, with over 400 bands, rappers, singers and DJs descending on Brighton for a weekend of frolics by the sea. Reflecting the UK’s current deep love for grime and urban music, London-born Stormzy heads up one of their Spotlight shows, with WSTRN, MoStack and M.O in support. Elsewhere there’s plenty of guitar heroes lining the bill, including ex-Smith Westerns frontman Cullen Omori and Diet Cig, and some sweet new soul from Samm Henshaw.

Unsound can genuinely claim to be a worldwide music, arts and culture juggernaut. Since its 2003 event took over the city’s underground cellar bars, it has spread its tentacles far and wide, going down as far afield as London, New York, Kiev and Adelaide. It combines art with the cream of (mostly experimental) electronic music, and each year commissions several collaborative projects, most famously Ephemera, where Kode9’s music was reinterpreted as three scents, which then formed the backbone of an installation in New York.

Found is now going into its fourth year, and its place as one of London’s most popular dance festivals is secure. Taking over a single day and night in Brixton’s Brockwell Park, its lineup pulls together the more forward-thinking names in house, techno and disco. This year the likes of Derrick May and Theo Parrish will take their turns behind the wheels, alongside Midland, Ron Trent and Maurice Fulton. For those with feet that still work after a day and night of dancing, the after-party at a nearby, as-yet-unreleased secret location goes on long after they kick everyone out of the park.

The fourth edition of the festival took on an unprecedented scale when it came to both musical programming and the role of DGTL’s other core pillars, ART and REVOLUTION this year. DGTL began as a gamble to find a new festival concept boasting a more selective approach to programming than other festivals. It worked; tts debut sold out and established its reputation as the region's newfound festival season opener and a strong festival brand both in and outside of the Netherlands. While other festivals hinge on ticket-selling headliners, DGTL evens out its musical assortment by combining those bigger names with a wide variety of local and international upcoming talent. In 2016, the fest's mouthwatering lineup pays even more attention to the techno spectrum by billing such artists as the mighty Nina Kraviz, RØDHÅD and DVS1.

Flow’s huge music lineups combined with arts and talks make Flow stand out in Europe's urban festival landscape. This year there’s a bunch of actual, platinum giants playing: Massive Attack, Iggy Pop and New Order and more. But work your way down, and its like flicking though the record box of your best musical mate; the likes of Kamasi Washington, Anderson Paak, Sleaford Mods, Four Tet, and The Kills are all listed as well. In a nutshell, if you can’t go to Flow and not love the music, you probably don’t like music all that much.

Bristol has a well-deserved reputation for being one of the UK’s greatest musical exports, thus it's only right that it has its own genre-straddling, crowd-pleasing festival. This year sees heavyweights like Dizzee Rascal and Chase and Status headlining, but elsewhere it’s a journey through the crème de la crème of the UK music scene. From Loyle Carner to Maribou State to Skream and MNEK, you couldn’t want anything more for a public holiday. There’s even legend among DJs David Rodigan MBE. God bless his boots. 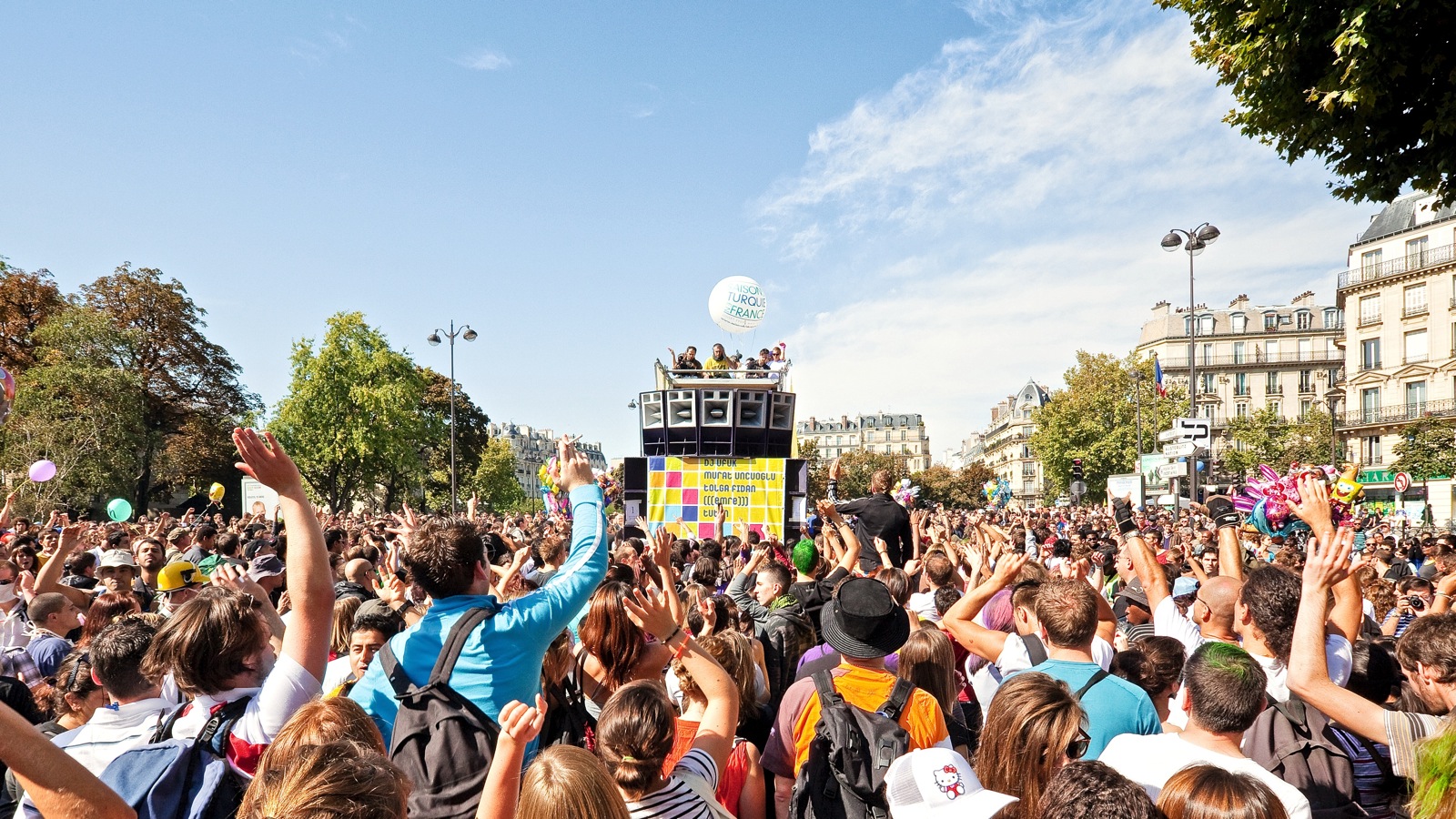 Though 2016's date is to be announced, the Paris Techno Parade asserts itself along three full miles of the City of Light each year. For those who depserately miss Berlin's Love Parade, Paris Techno Parade turns its street music up to eleven: DJs, subwoofers, and sound-mixers sit atop decked-out flat bed trucks, which ply through a heaving sea of 400,000 people—mostly young, cool, and determined to live out loud. The belly button rings, sunglasses, and electronic detonations are a freewheeling antidote to the staid Haussmann building facades that line the route. If the wrought iron balconies and old elm vines exude wealth, history, and power, the beats exude youth, diversity, and ground-level uprising. 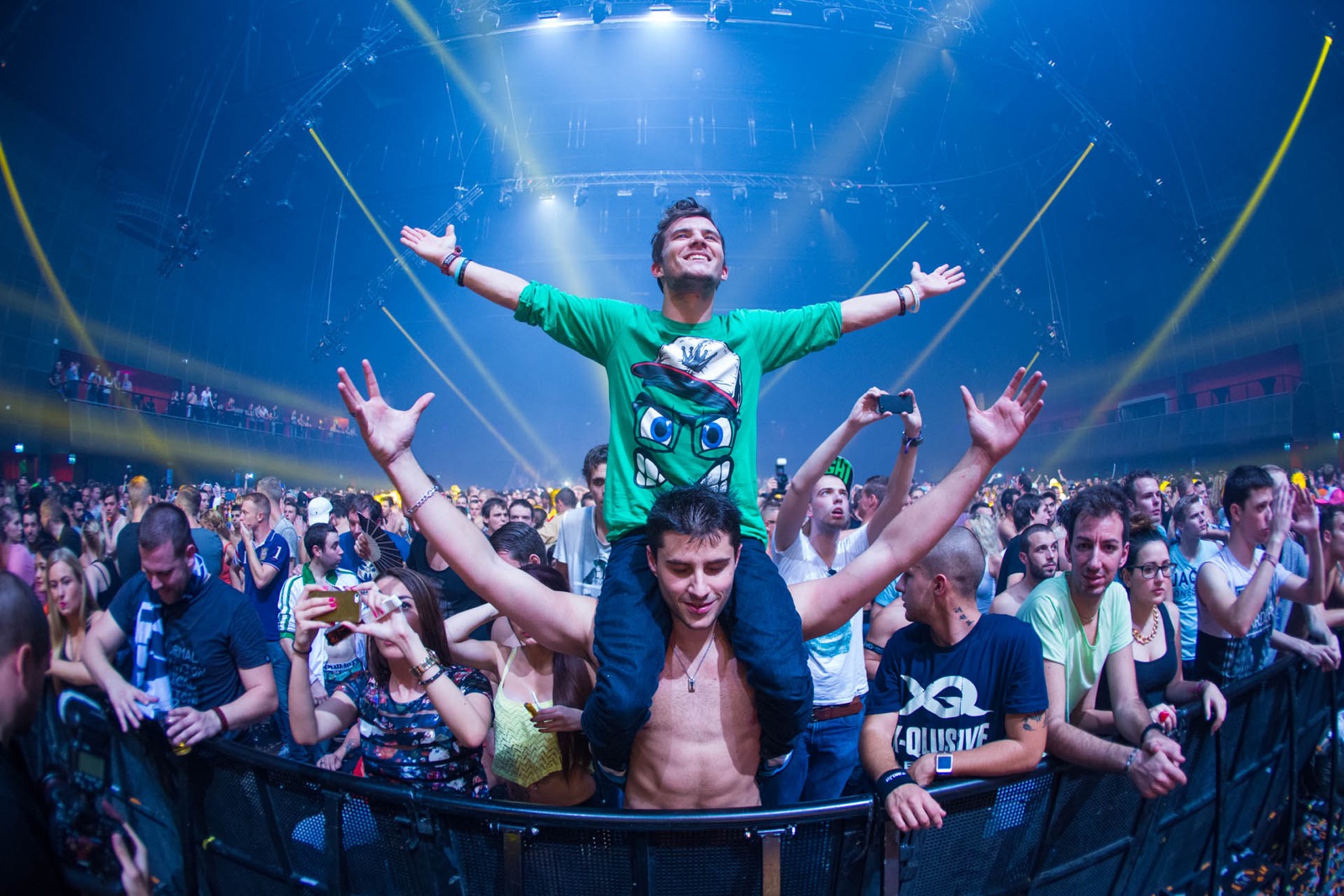 Amsterdam Dance event is a five-day industry and entertainment extravaganza scattered across 115 reputable venues throughout the iconic Netherlands' capital city. The festival boasts some of the biggest names in the international electronic club scene as well as its fair share of up-and-comers and underground artists. In its entirety, ADE involves an astronomical 450 conference and music events – including over 2,200 DJs. It’s all business during the day with presentations and networking opportunities at ADE Pro, ADE Tech, HDE, ADE University, ADE Next and ADE Green. Things really take off at night, when the who’s who of club music creators and aficionados take over the town. In short, it's a dance music lovers' Mecca.