The Mayor of Playa Del Carmen has canceled all future electronic music festivals in the area after the fatal shooting that took place at The BPM Festival in the early hours of Monday. In a press conference, Mayor Cristina Torres Gómez said that this year's BPM Festival would be the last to take place in Playa Del Carmen adding that the upcoming Arena Festival, which was due to take place next month, would not be allowed to go forward.

"We want these types of events to go," Torres Gómez said. "We won't allow one more." Speculation that the violence could be connected to conflict between drug cartels and festival organisers has been rife. One promoter from the area told Reuters that "armed men who claimed to be part of a drug cartel turned up recently at one of his parties, demanding access to sell drugs." The decision to ban events like BPM came through the acknowledgement that many businesses face extortion at the hands of cartels, with many of them demanding access to clubs in order to sell drugs.

A photo of a chilling message spray-painted on to a blanket and hung up in Playa Del Carmen has also been circulating on local blogs. It allegedly claims responsibility for the violence on behalf of a cartel, reading: "This is a demonstration that we are here, and it was because you didn't get in line, Phillip [from] BPM". (Phillip Pulitano is the Canadian co-founder of the festival). It continues: "This is the beginning, and we're going to start cutting off heads of [rival drug cartels]."

The shooting, which took at BPM Festival on Monday, left five people dead and 15 injured. The incident occurred at a closing party held at the Blue Parrot nightclub in Playa Del Carmen, where Spanish promoters Elrow were holding a party. The shooter or shooters are still at large. BPM issued an official statement several hours later confirming the shooting and explaining that any other parties associated with the event would be canceled while the police launch an investigation into the killings. 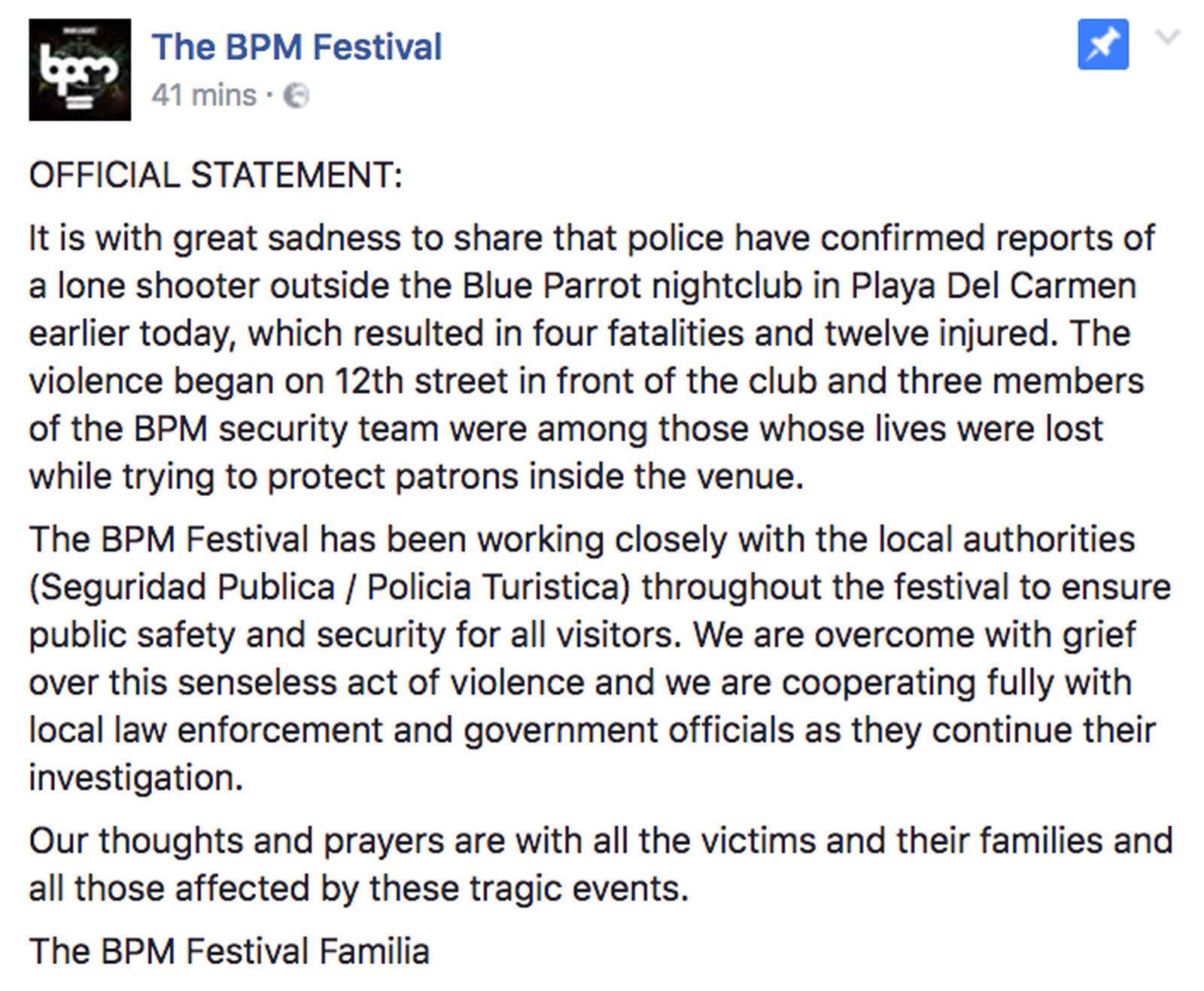 The shooting took place at Blue Parrot in Playa Del Carmen, where Spanish party promoters Elrow were hosting a closing party as BPM reached its final night. A lone gunman tried to enter the club at around 2:30 am but was denied access by security.  Festival security tried to stop the shooting and protect people inside the club, three of them were shot in the process. Panic ensued inside the Blue Parrot, and a stampede led to the death of a female party goer. According to the latest information four people were killed and 15 injured when shots were fired at Blue Parrot during Elrow's closing party at about 2:30 am. in the early hours of Monday/Sunday night. An 18-year-old woman died after a stampede broke out towards the club's exits. 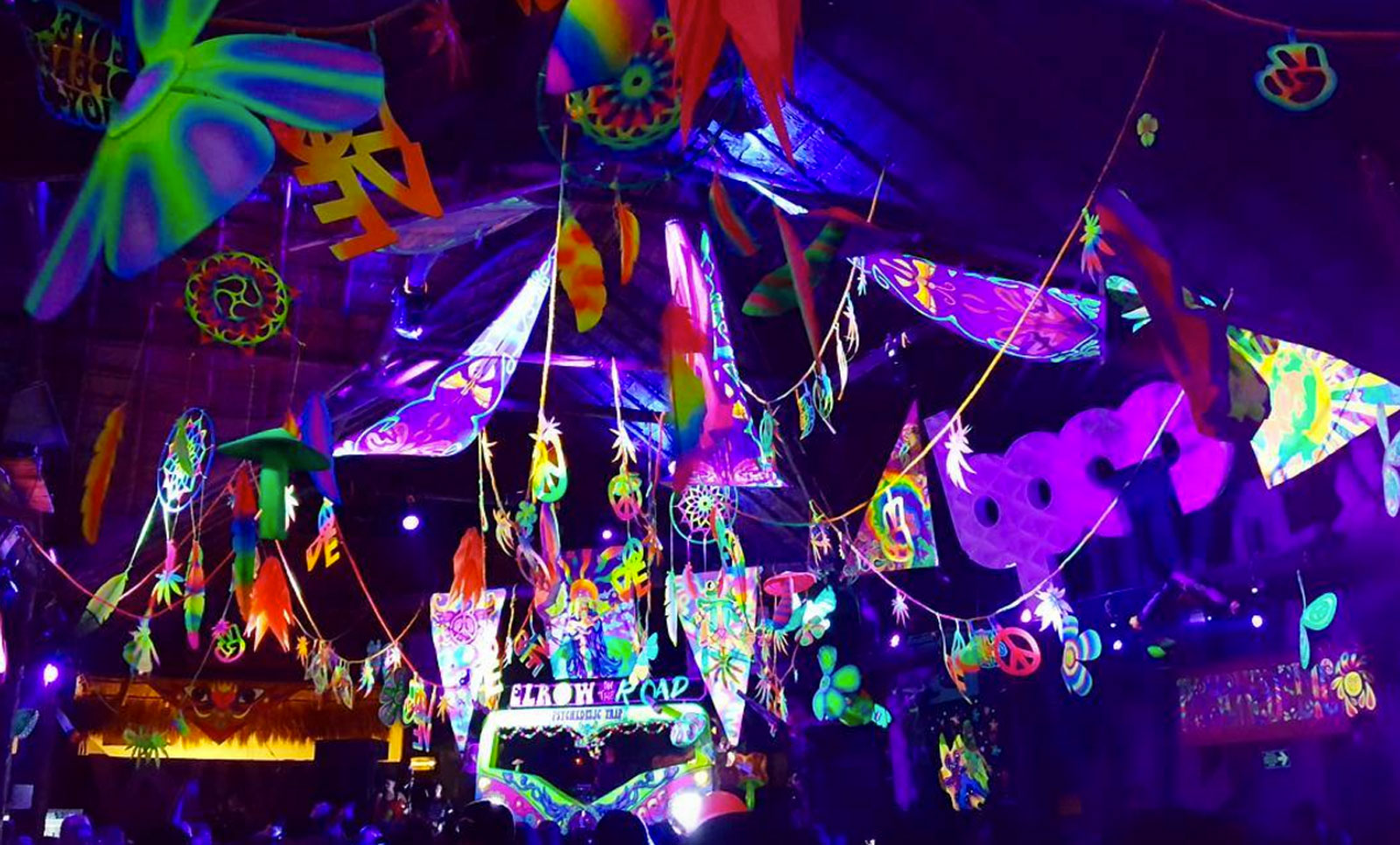 In a press conference earlier today, Quintana Roo State Attorney General Miguel Angel Pech confirmed that two Canadians, one Italian and one Colombian citizen are among the dead. He also revealed that uniforms indicate the dead include three members of security staff, and that one woman was killed in the stampede following the shooting. One of the security guards was well-respected Toronto doorman Kirk Wilson, who was well-known in the Canadian city as well as having experience on the road with Nelly Furtado. The 49-year-old was known as a six-foot-five "gentle giant."

Nelly Furtado gave the following statement to Billboard: "Kirk Wilson faithfully assisted on our security team for several international shows and was adored for his humility, kindness and easy nature. He approached his work with great focus and selflessness; a first responder; an everyday hero. We are shocked and disheartened, and our thoughts are with his young family."

BPM Festival was celebrating its 10th anniversary this year. Running for 10 days in total, it attracts thousands of people from all over the world, with around 375 DJs in town and parties happening every day and night in Playa Del Carmen.

Several eyewitnesses took to social media or spoke to the press about the incident soon after it happened. One of the first was Jackmaster, a Scottish DJ who was at the Blue Parrot when the shooting happened.

He tweeted: "'Someone has come into the club in Playa Del Carmen and opened fire. 4-5 dead and many wounded. Stay in ur f****n hotel if you're here at BPM." He later added, "Apparently now more shots fired at another club in the area."

German DJs Sidney Charles and Santé back to back when the shooting happened. Sidney later tweeted to let everyone know he was safe. Mixmag 's US Digital Editor, Valerie Lee told Sky News that she heard 'four or five shots' at the club.

She said: "People started running because there's an exit in the back. We stopped and hid behind a cement wall, then crawled under a metal table.  Security guards at first didn't think it was shots and kept claiming it was fireworks, saying everything was OK. Then people kept running and said they saw a gun. We kept hiding until they opened the back gate and we ran outside." 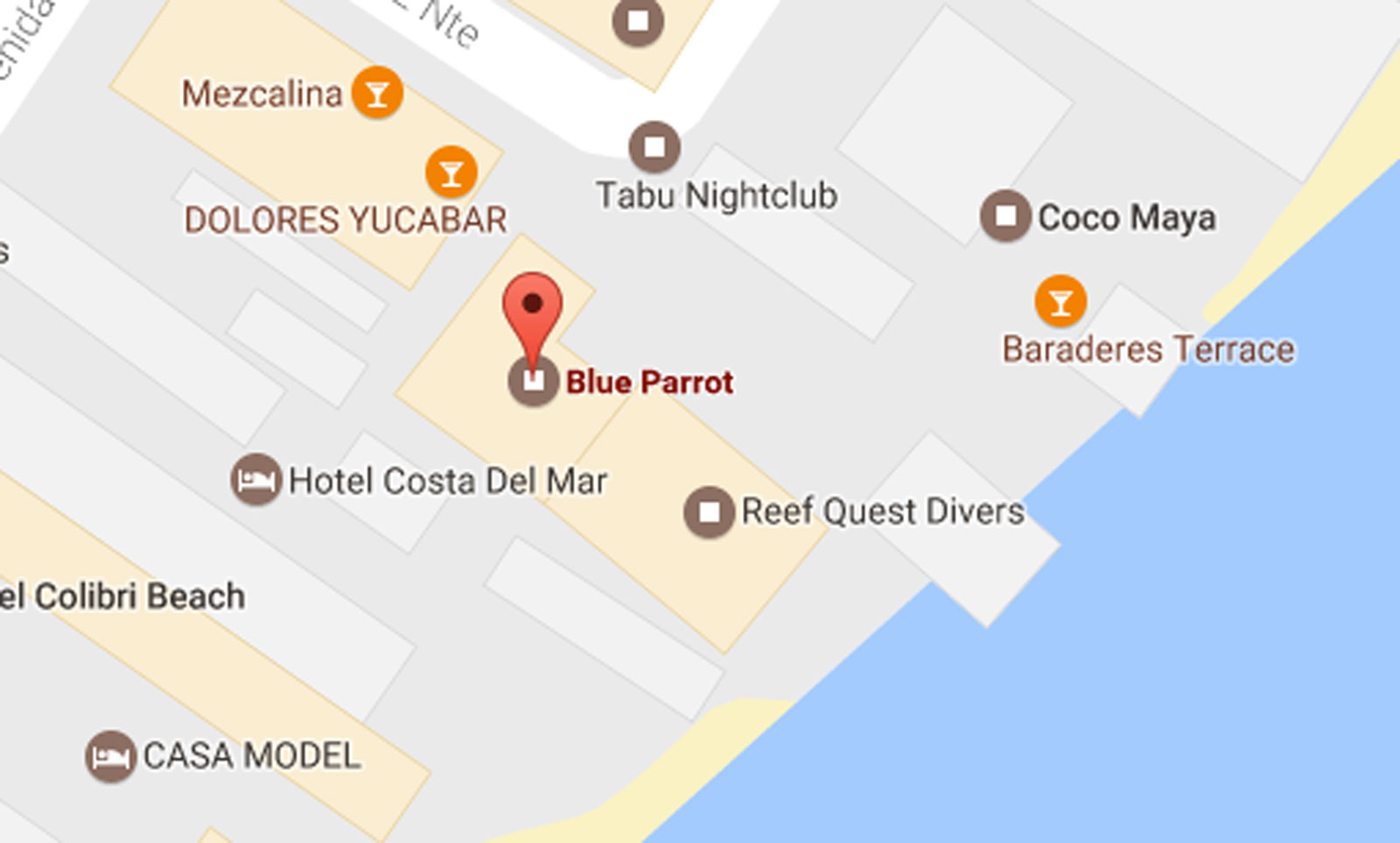 A witness named "Angel" spoke to Dazed , telling them: "'My friends saw the shooter running across the back of the club shooting into it through a metal rail. One of my friends saw a person shot and bleeding."

"Once the shooting stopped we jumped over that same fence and ran on the beach about 10 blocks. We were helped by some other party goers by letting us hang out in their hotel for a few minutes. They saw a guy shot in the head."

The remaining events at BPM have now been cancelled as police mount an investigation into the shooting.