My number one piece of advice for Fes is “GET LOST!” Lose your mind and find your heart. Lose your way and find a new friend. This ancient city full of labyrinth-like alleys is full of the sublime…and surprises. This is the desert, but it’s not Las Vegas. The landmarks aren’t always obvious, well-marked, nor covered in neon.

Even if you’ve traveled here with a friend, venture off on your own for half a day. I promise you you’ll meet some fascinating people, especially during the festival. I met these two fellows as they were playing music on a street corner. We spent a few minutes comparing notes on our favorite musicians… 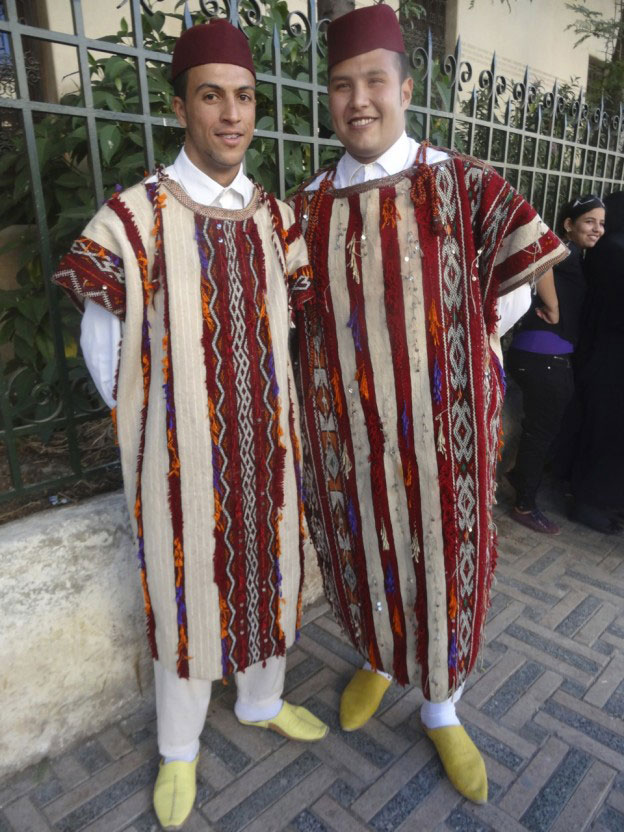 I spent part of the afternoon gathering “Fes-timonials” from those I met about why they came to the World Sacred Music festival. Here’s Lea from Germany telling me she’s so sad she missed last year when Bjork played the festival:

One of my favorite connections was with Fatima from Casablanca who helped to create the original festival nearly two decades ago:

She and I had a delightful time enjoying the afternoon concert at the Batha Museum, a venue I highly recommend you seek out if you go to Fes, as the 400-year-old oak tree creates a soulful backdrop for the musical collaborations on the intimate stage.

I was lucky that this sweet guy, Samer, told me about a few impromptu concerts happening in the medina that weren’t in any official program. Unfortunately, the best was in someone’s home and they wouldn’t allow any photos. 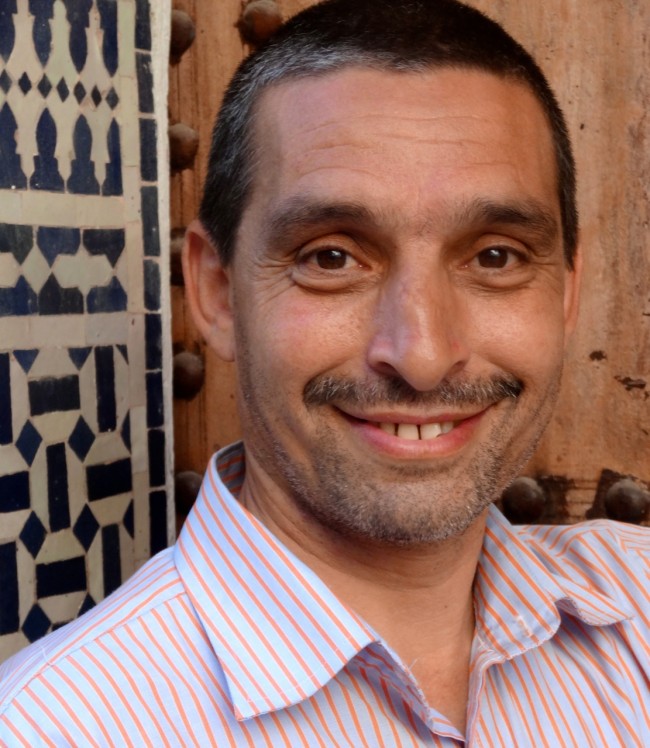 Wandering around town, I happened upon places like this venue where I was told there would be a Moroccan rap group playing with belly dancers later that night. 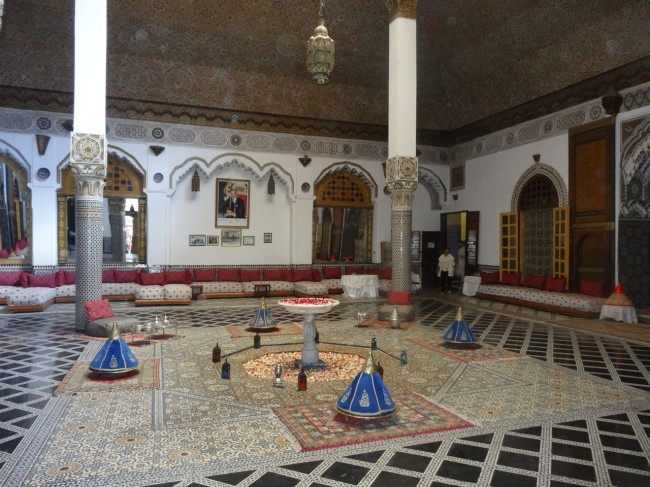 But, one of my favorite interactions was with Mohammed and Mehdi who run an herbalist shop off a very remote alley. Over the course of a half an hour, I got a lesson in the medicinal value of herbs, I found out why Fes is the spiritual capital of Morocco, as well as how music provides a means of healing (too bad you can’t smell this video, as I had a first hand whiff of some very potent herbs)…

In this short video, you’ll see that Mohammed blew my mind with a kind of “Moroccan cocaine” that had me running for the door.

After all my touring, it was time to hoof it on over to the Batha Museum for the 4 pm collaboration called “Nomadic Voices” with two musicians from the Mongolians steppes with a quintet from the pastoral Sardinian mountains. The common thread wasn’t just their rural life that hasn’t changed much for generations, but it turns out that the well-known Mongolian throat-singing tradition, high and low vibrations simultaneously, is shared by only a couple of other musical cultures: the Tibetans and the Sardinians.

I had the good fortune of running into the managers of both the Mongolian and Sardinian musical groups before the show and really enjoyed their perspective on this first-ever collaboration on what we were about to witness:

It was a glorious afternoon made even better by the fact that there was a traditional tea seller right there in the courtyard of the museum and I savored a little Moroccan fresh mint tea as the concert started. 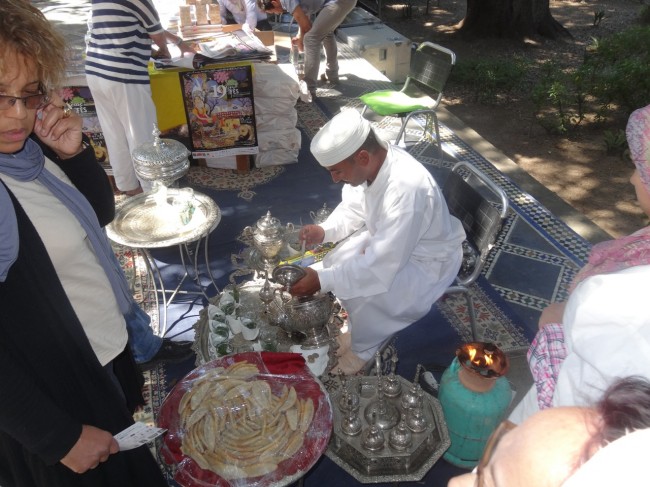 To be honest, I didn’t come to this particular concert with great expectations. Sardinia and Mongolia felt more like con-fusion than fusion. Didn’t know there could be some kind of musical connection. And, the seven guys on stage couldn’t look any different from each other. 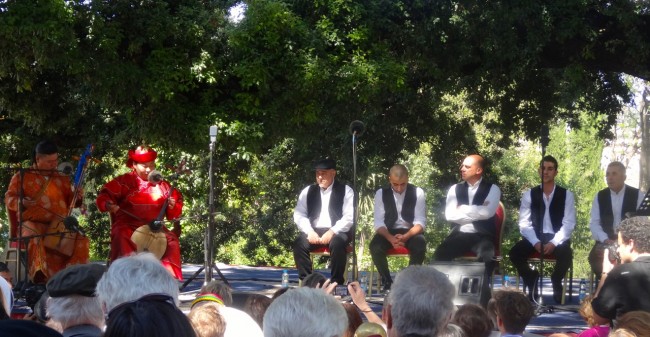 But, as the Mongolians started to show their talent, I felt so blessed as the sounds were otherworldly and straight from the gut, at exactly the same time. 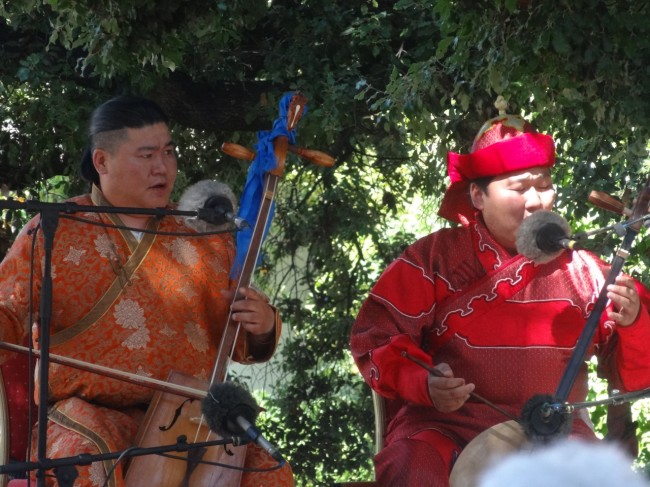 And, then, when the cross-cultural music collaboration began its crescendo, I was speechless. I kept looking at Fatima sitting next to me and we both could feel we were being given such a sacred gift. 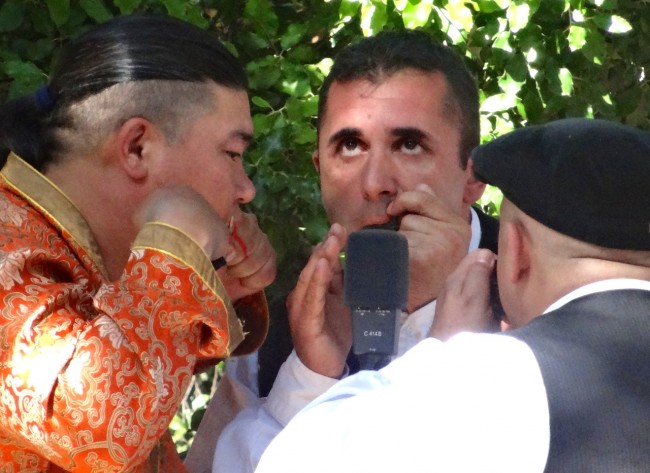 By the end of the concert, I felt a kinship with Fatima, not because I wanted to wear her pink, floppy hat. We bathed in collective effervescence, those magical moments when our communal joy overtakes any sense of individual separation. It’s in those moments when one of my favorite Beatles’ lyrics feels like it captures this kind of festival peak experience: “The time will come when you’ll see we’re all one.”