You know you’ve built something special when your customers call themselves a family—like ShipFam , the self-appointed name for those folks who set sail on the Holy Ship! dance music cruise each January. And who’s the captain of them all? Aye aye, it’s HARD CEO and founder Gary Richards.

Richards has spent the last 10 years building and curating HARD events , including HARD Summer, HARD Hawaii, Day of the Dead, and Holy Ship!—and creating a dance music brand with a serious pedigree. He has one of the industry’s keenest Spidey senses for talent, honed from decades of producing events (he launched the original Electric Daisy Carnival in 1991), to serving as Rick Rubin’s A&R guy for dance music at Def Jam, to being a DJ himself (as Destructo ). If there’s a kingpin on electronic dance music list's, Richards’ has been on it, including Rolling Stone’s “50 Most Important People in EDM” and Billboard’s “EDM Power Players.” 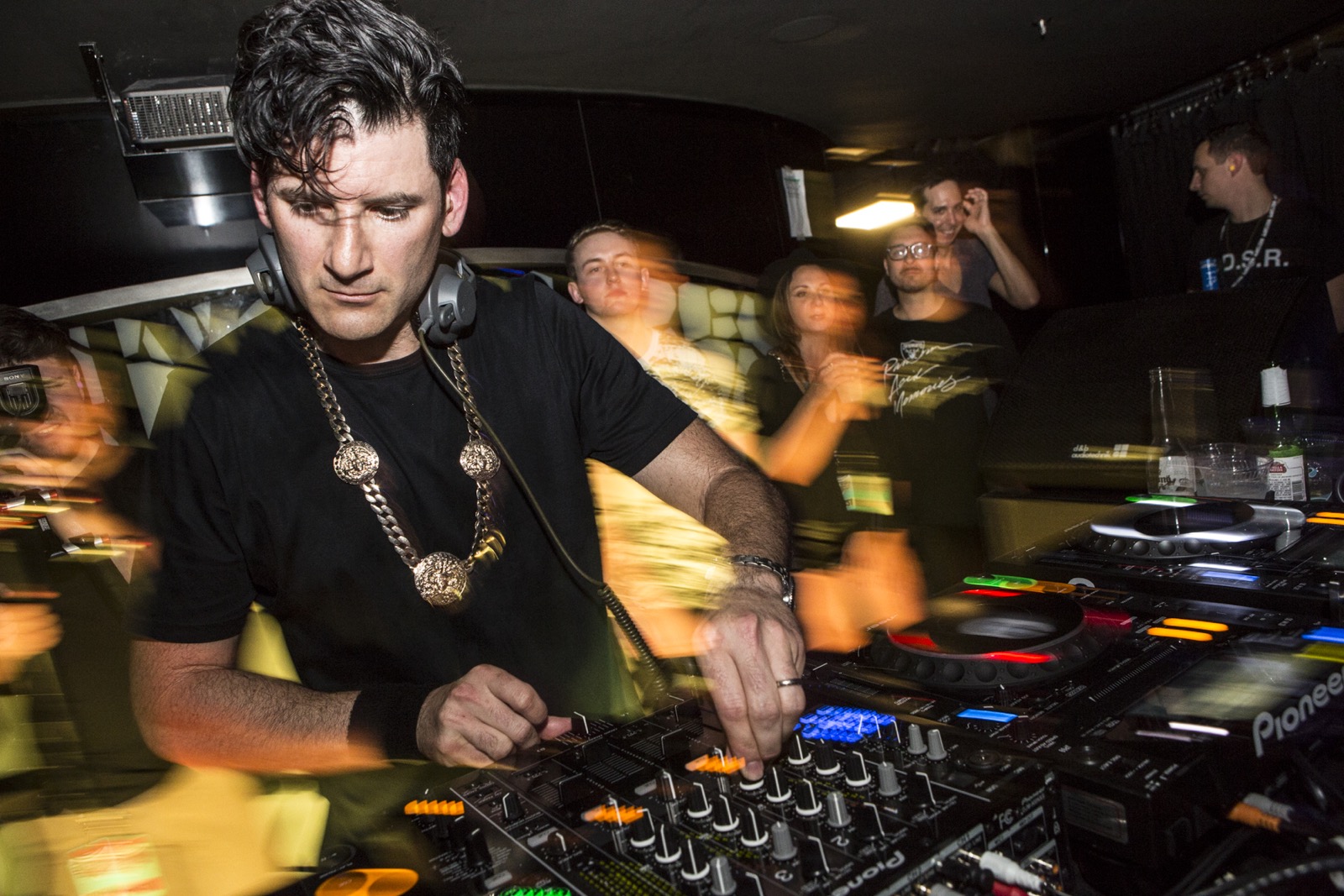 Over his storied career, the Los Angeles, California, native helped to break Skrillex, Steve Aoki, Calvin Harris, Diplo, Deadmau5 and Justice, among others, and he’s unafraid to trust those ears to lead us all to the next bangin’ thing. “I don’t book [HARD Summer] like everyone else,” Richards told Variety in April 2017. “Everyone does it based on how many tickets the artists sell, but if I like one [act] better than another, they’re going higher on the poster. I don’t care if they’re selling more tickets—if I was about that I’d have the Chainsmokers.” 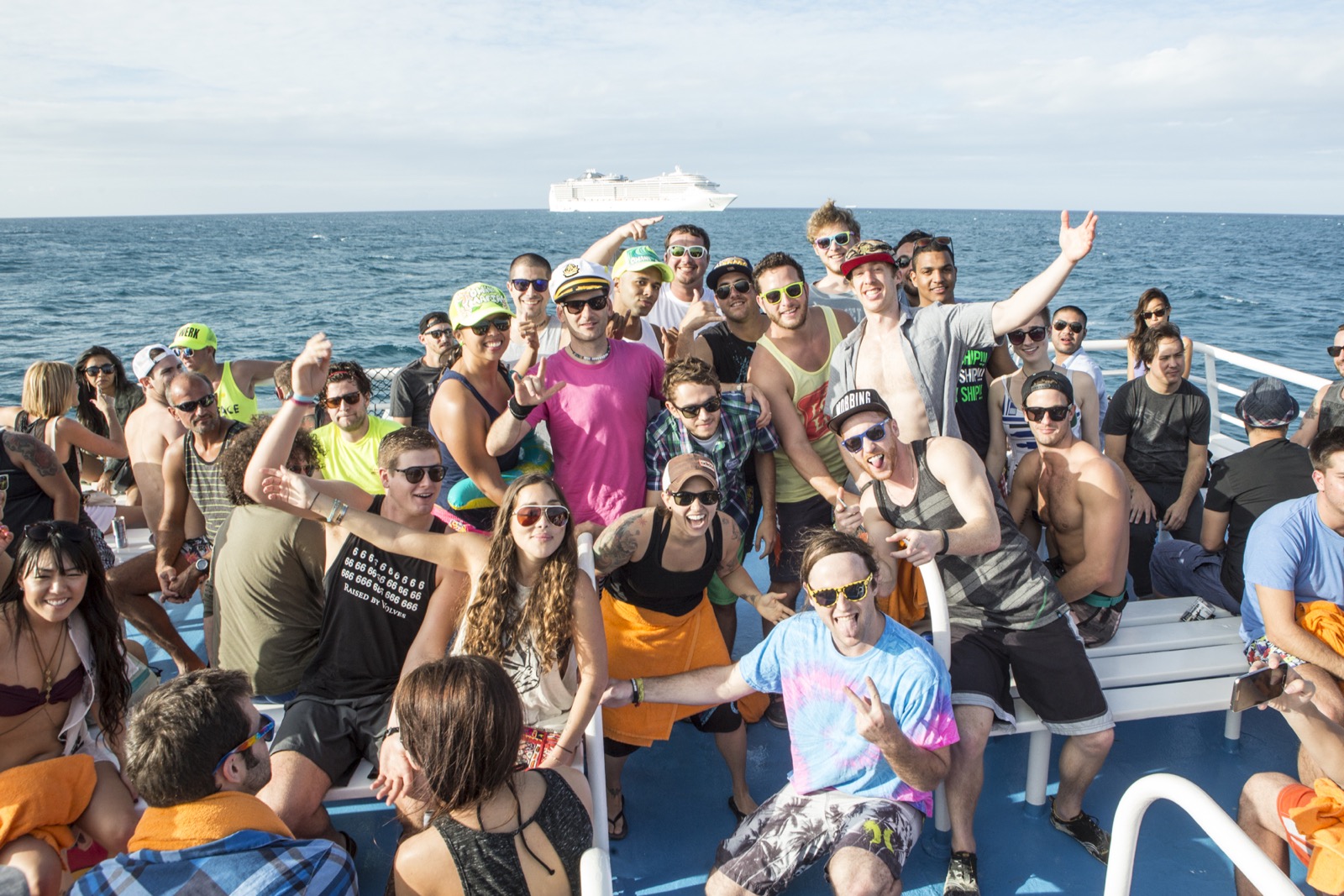 Richards (middle, in pink) hanging with his ShipFam. Photo by: Voake

“Going into it, I knew that I didn’t want it to be a rave,” Richards told SPIN in 2012. “I didn’t want it to just be a place for young kids to do stupidness, and I wanted the music to be quality. I wanted to show people that, hey, there’s a lot of electronic music, different genres and a lot of quality. It doesn’t have to be the same trance guys that have been coming to L.A. for the past 20 years.” 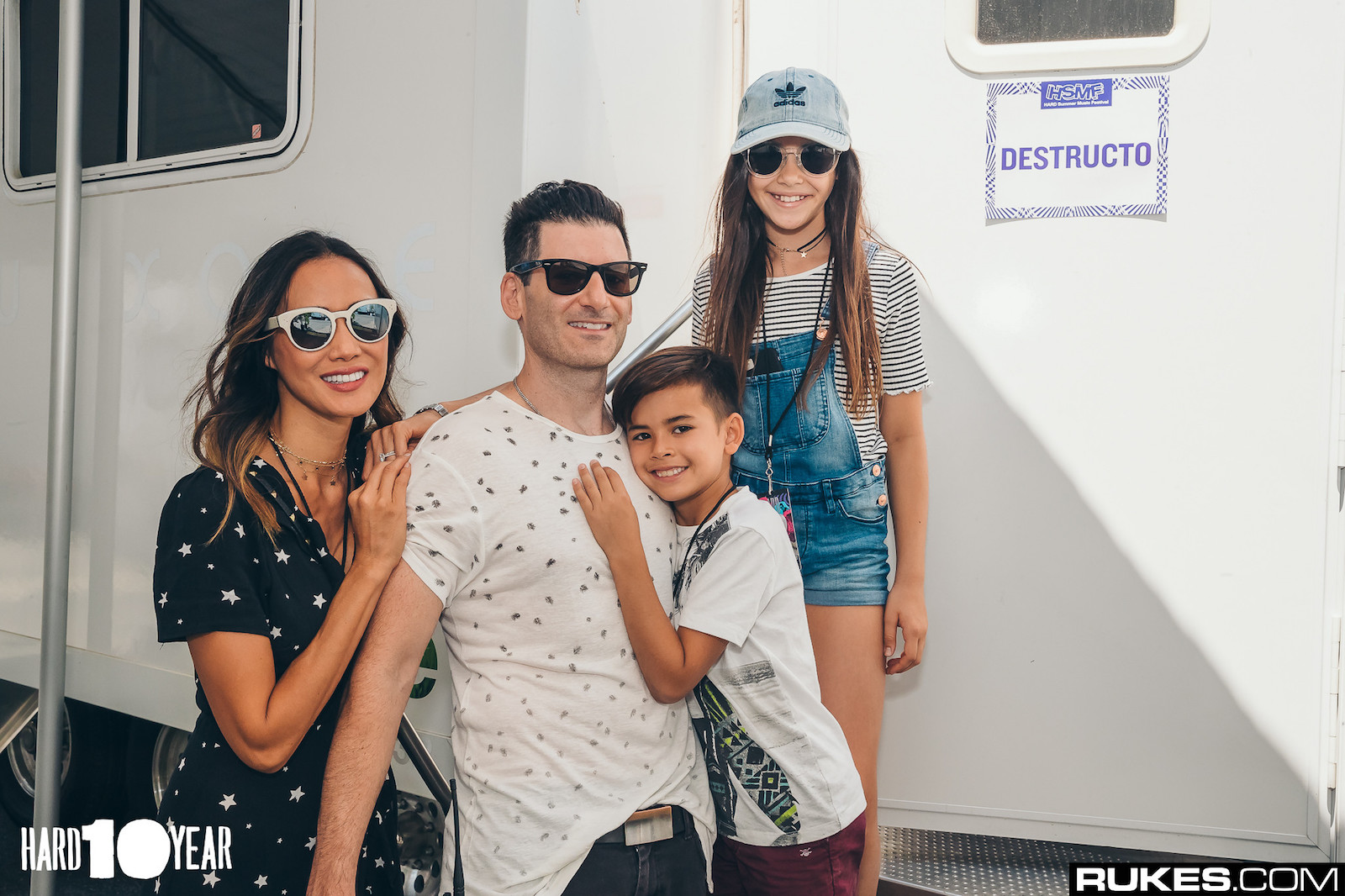 Richards with his family at HARD Summer 2017. Photo by: Rukes for HARD Summer

That kind of variety and street cred helped HARD stand out next to its more flashy cousin, Electric Daisy Carnival (EDC). (Though Richards threw the first EDC party in the early 90s, he handed the brand over to Pasquale Rotella's Insomniac Events in 1993, and Rotella turned EDC into the Vegas-based behemoth that it is today.) “When asked how he thinks his events compare to his peers like Insomniac, [Richards] says, 'We're a little different because we put more detail and focus on the artists and making sure the sound is amazing.’ Not trying to ‘vibe-up’ the place with dancers and theatrics, Gary explains that HARD is more about the music and the artists,” the OC Weekly reported in 2013. 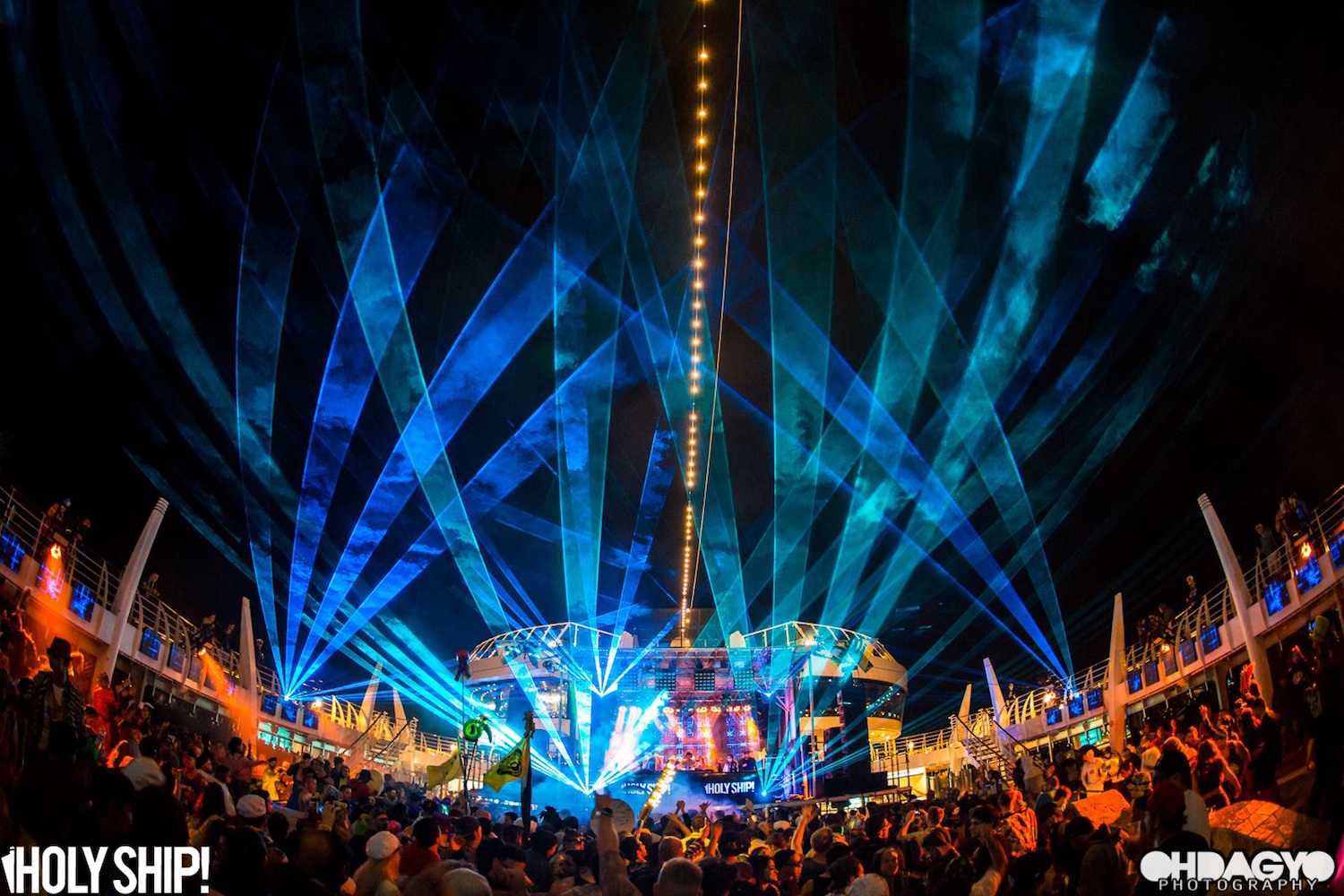 But now the two rivals are under one roof: Live Nation’s, which acquired HARD in 2012 and Insomniac in 2013. At the time of the merger, Richards signed a five-year contract, an agreement that just culminated and won’t be renewed. Many questions still swirl over who will take over his duties at HARD or what happens next. As Richards wrote on Facebook, a new chapter will soon reveal itself: 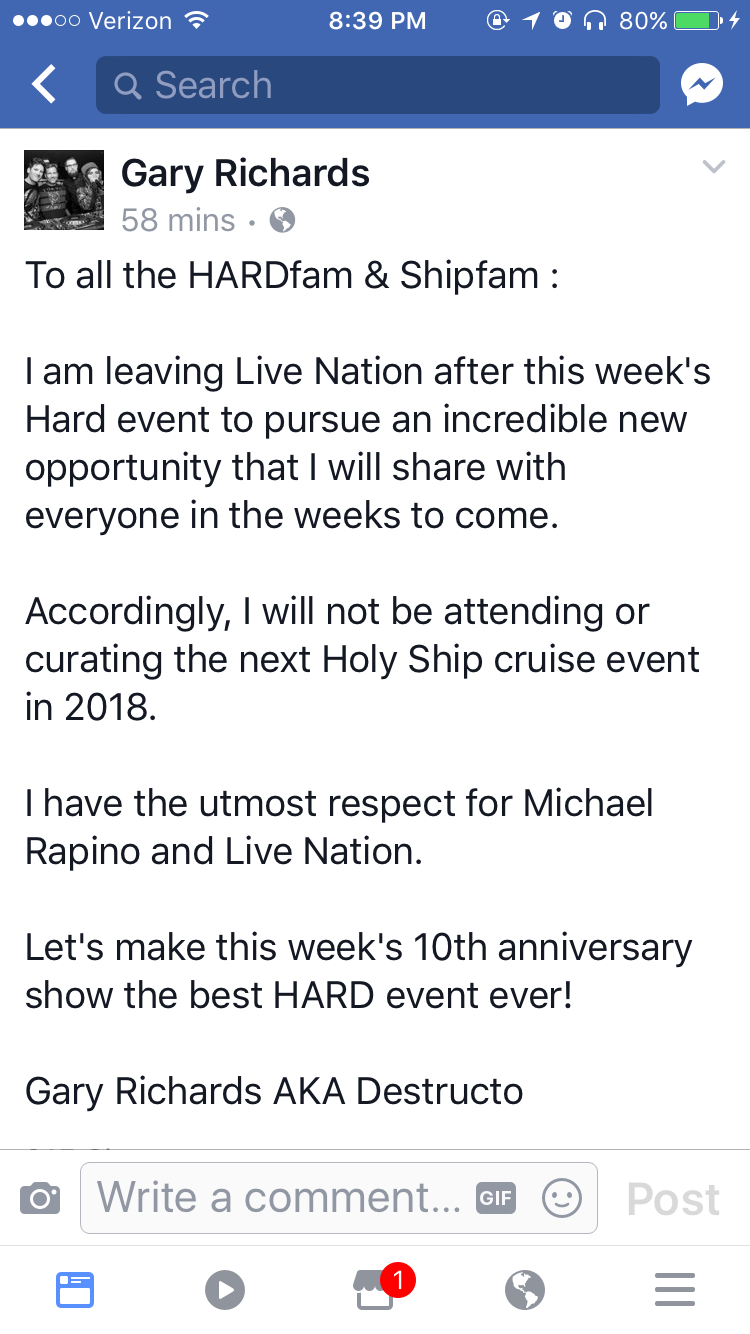 A Holy Ship! event without Gary?! The news was devastating for HardFam and ShipFam, who headed to Twitter to voice their upset with the hashtag #NoGaryNoShip.

Richards’ buddy Boys Noize even tweeted a petition urging Live Nation to restore their Captain. “His name is synonymous with high quality and well-staged events all around the world, and without Gary, there is no ship, and most importantly, no Shipfam,” the petition says. “At the end of the day, if you choose to give Gary the boot, or otherwise force him from Holy Ship, we pledge to make this hurt, and not physically, but financially.”

At the time of this writing, the petition was well on its way toward its goal of 2,500 signatures. Because that’s what you do when you’re family.