Jamie Janover is a true renaissance man. On his resumé, you'll find such titles as musician, philosopher, festival cofounder and producer who's been deeply tapped into festival culture for two decades. With his fingerprints on so many things, you've probably already heard his name, whether through his music, as the producer of SONIC BLOOM , or in an appearance about Nassim Haramein’s Unified Field Theory.

Janover got into music first, at a very young age growing up in New York City. His parents had a record collection – predominately The Beatles – that he would play until he wore them out. By the time he was nine-years old, he knew every song by heart. His uncle was a musician and played the hammer dulcimer, and Janover applied his rudimentary percussion skills to this instrument and fell in love.  “When I was at 14 at summer camp, I started playing the drums," he recalls. "Three of us would jam. I was on drums, and the first time I performed in front of an audience was at the talent shows at summer camp.” Throughout his high school and college years, he played in various bands and had a pivotal moment when he played on the street for the first time. “I first played at Grand Central Station [in New York]…I played for about 45 minutes before I was shut down (you had to have a permit). The response from the public that I experienced fueled my passion for playing music in public.”

These early experiences ensured that Janover’s whole life would revolve around music. Jamie moved to Boulder in the 90s and started going to Phish shows and intimate, before-they-were-famous String Cheese Incident shows. One of his first fest experiences was the Telluride Bluegrass Festival . “I realized you could have music and these really cool experiences in a beautiful environment with food and good conversations, and it was like a light went off,” Janover says. Several years later, Janover attended Horning’s Hideout, the String Cheese Incident’s first festival, where he saw Nassim Haramein speak for the first time on his Unified Field Theory.

“He blew my mind,” Janover says. “I followed him for years, soaking in his knowledge, until I finally got formally trained by him to explain his theory in layman’s terms.” From the floor of Grand Central, he eventually catapulted to playing festivals – a natural trajectory for this dedicated and adventurous musician. “Of all the ways and places you can play music, festivals are my favorite,” he says. “I’d much rather play a festival than have my own show at a club because of the depth of the experiences I can have at a festival.” At this point, Janover was traveling to festivals, playing music, giving talks on Unified Field Theory, and receiving feedback and information from other festival attendees and participants over campfires and intimate conversations. He would return home, research the information he'd received, absorb them like a sponge, and travel out into the world and share anew. 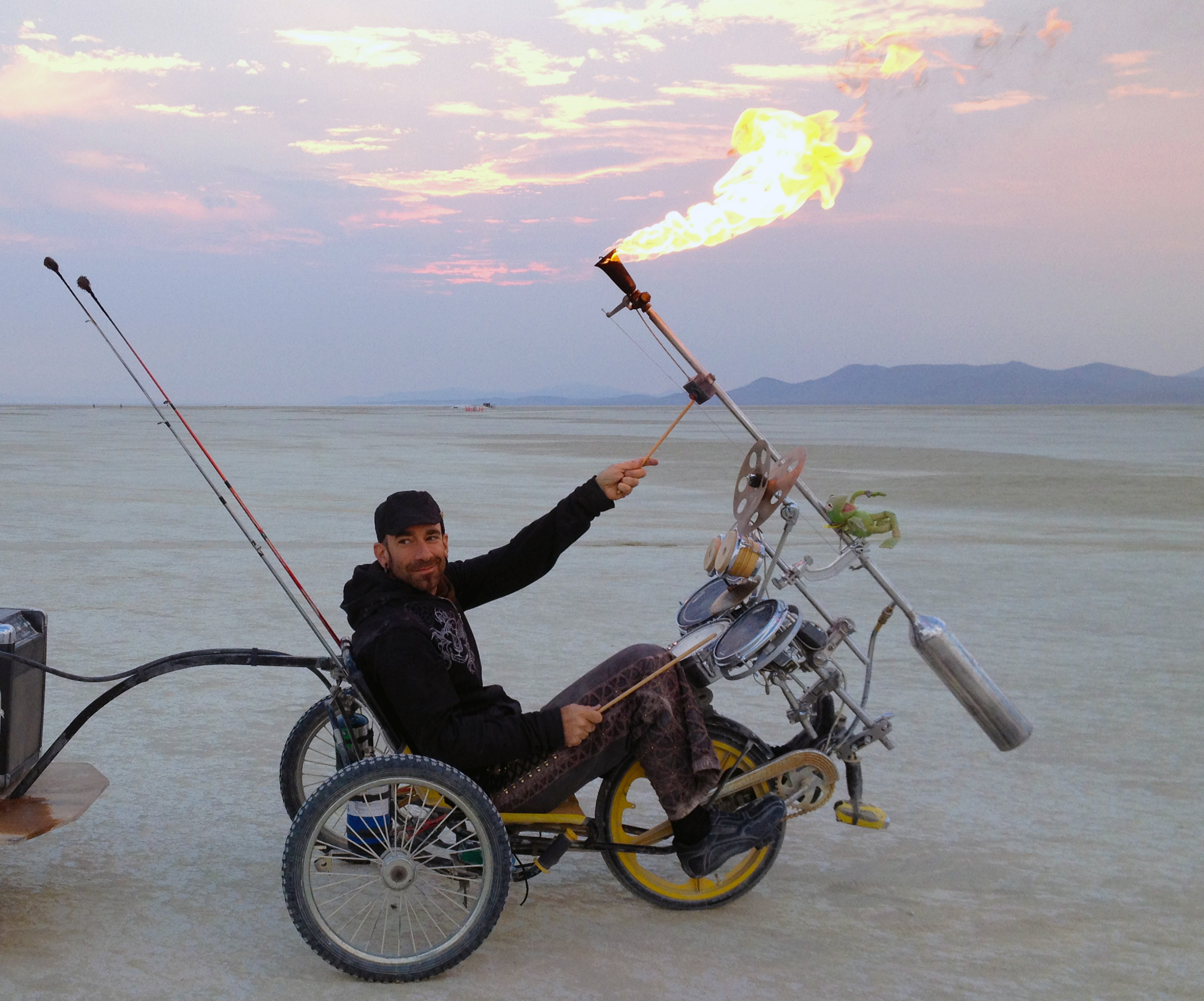 “Now I feel so blessed and fortunate to travel and do festivals all over the world," he said. "Because of the global [festival] community, the experience gets exponentially amplified. Having conversations with people all over the world about music and the universe and feeding this information back to all these other people in all these other places is extraordinary. Having social media invented during this process has been pivotal. I came up in an era where information was spread through postcards. You would get flyers or postcards and mail order info for tickets. Now we can share information in the blink of an eye,” says Janover. “It’s been fun to watch the evolution of technology, to see how our creativity can hit the world in an instant.”

Burning Man has also impacted Jamie’s life. “Having gone to Burning Man in 1999, and [having] come back with realms of inspiration, I developed a mobile rig for my bike which I call the RealmsMobile. It is one of my favorite ways to perform and to share music. It is a mini drum kit that plays fire balls and fire drums. This coming year will be my 18th burn in a row, and I also rode around and played the RealmsMobile at High Sierra Music Festival for a decade,” Jamie recounts.

In addition to his music and speaking, Janover has been the producer of Colorado's SONIC BLOOM for the past decade. For him, the curation and presentation of music, speakers, and immersive experience is such a profoundly creative aspect of his being, and one of his favorite facets of his career. Janover is also deeply committed to sustainability and is always evaluating the emerging technologies to see what can be woven into SONIC BLOOM.

Janover credits festivals as a crucial place for the modern transfer of information and consciousness development. “Festivals are the front edge of where the wave of consciousness evolution is happening. If you really want to ride the edge of sticking your neck out in levels of new realms of existence, festivals are an incubator for people," he says. "The seekers of information and early adopters in thought are heading to festivals. They like that environment of the feedback loop of information that happens when you are in an environment of such richness and diversity. At festivals, people are creating a field that is more coherent, like a vortex where feedback is faster and more synchronized, focusing attention on activity or music and tapping into the unified field,” Janover muses.

In this vein, Janover created the Sonic Bloom Academy in 2017, which takes place the week before the festival and immerses its students in classes taught by experts exploring visionary arts, movement, music making, and permaculture. The aim is to step up the fests's educational programming with offerings emphasizing real-world change and action in order to strengthen the transformational experience.

When asked how he sees the future of festivals, he says, “Some of what I see in the world in politics I see reflected in festival culture. I see an increasingly polarized view. There are these massive corporate mega festivals, giant EDM events. I believe competition for these things will grow, but at the same time, these smaller, family-style, juicy festivals will become more popular as people become more and more disillusioned with these mega festivals. Hopefully, in politics, too, we will return to the roots, to the family and smaller scale community level issues and steer away from the mega corporation takeovers.”

As the evolution of festivals continues, you can bet we'll see Jamie Janover's personal evolution right alongside it.