“There is this thing that happens during a Librarian DJ set... She will have the crowd rocking and eating out of her hand as she bounces around onstage... She'll look up with this coy grin on her face: she has you right where she wants you. To me, this look epitomizes her All-Star status.”
Danny Corn, DJ / Curator, Symbiosis Juke Shack

Andrea Graham, internationally recognized as a DJ and producer as The Librarian , and as curator and cofounder of Bass Coast in Merritt, British Columbia, Canada, she has left similar impressions on perhaps hundreds of thousands of festival-goers worldwide. “The Librarian,” “Andrea,” “Bass Coast Cofounder,” “All-Star,” call her what you will – she is one special lady.

Before conducting these interviews, Andrea was a bit of an enigma; I have attended Bass Coast four years running, and seen Andrea perform all over the world, but never having worked particularly close to Andrea, I knew I had to speak with those in the community who work closely with her to get the inside scoop on why this woman has become such an influential member of the festival scene. It turns out, it’s not only what she does, but how she does it that makes her the perfect Festival All-Star.

Andrea has been “The Librarian” for the better part of a decade and has managed to co-found a widely respected festival with her business partner, Liz Thomson. Everything you hear at Bass Coast is Andrea’s doing: She’s the ears of the festival. All that you see at Bass Coast is Liz’s area: She’s the eyes of the festival. Of course they also have teams that help to refine those channels and fill in all the details. 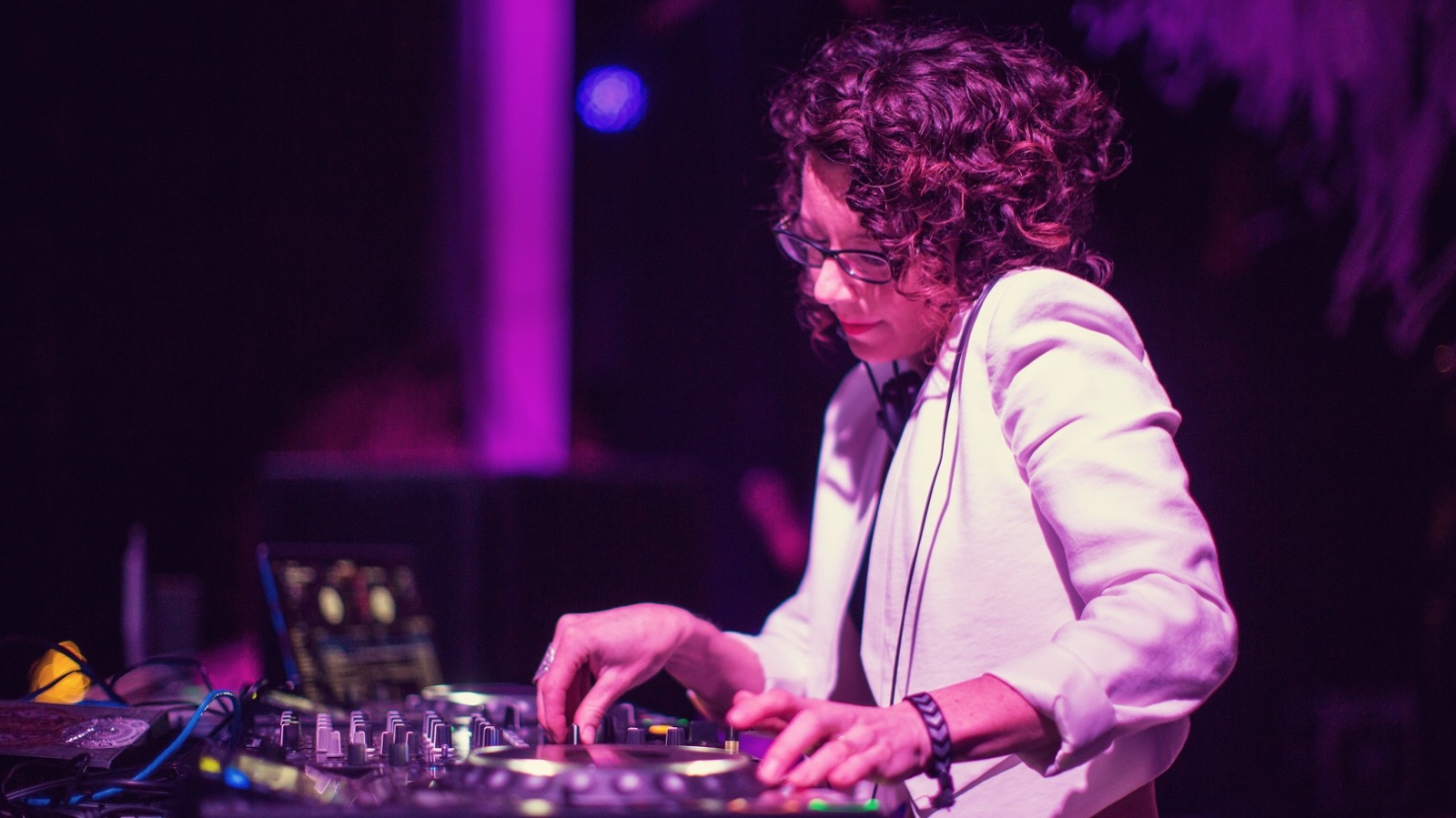 What is so impressive about Andrea is how hard she works, and how she handles it: She tours relentlessy, makes music, and runs a festival. Somehow she remains personable and level-headed in the face of challenges, and demands on her time. “As a DJ and performer she has made herself available to a lot of people as a public figure and she is always being reached out to,” says Paul Brooks, Director of Communications at Bass Coast. “Everyone is vying for her time, or wants to contribute to her projects in some way, and she listens to everyone, gives her time generously, and makes it work.”

And she doesn’t play favorites, either: Andrea says that she feels a personal connection to each person who contributes to Bass Coast, “because so much thought has gone into it, and they’re all so talented," she said. "I hope to talk to everyone, and connect with everyone... to poke my head into every set... and there are over 100 on the lineup, not to mention the performance and visual artists... But I really do hope to have a moment with everyone. In past years, I’ve felt sad at the end of the festival if I didn’t connect somehow with each person.”

According to Danny Corn, Juke Shack curator at Symbiosis Gathering , this is because both personal and professional relationships are important to Andrea. Maintaining good relationships, he says, is paramount to building an event like Bass Coast. Andrea takes her relationships seriously and always shows up kind, patient, and present. Even “5 am Andrea is always a pleasant surprise,” says Andrea’s best friend and Bass Coast music co-curator, Max Ulis of Lighta! Sound. “I have been to every Bass Coast since its inception so really I have watched the festival grow through Andrea’s sheer will and dedication to high-level-awesome.” According to Max, it’s Andrea’s determination, music, leadership, and unselfish attitude that he admires. 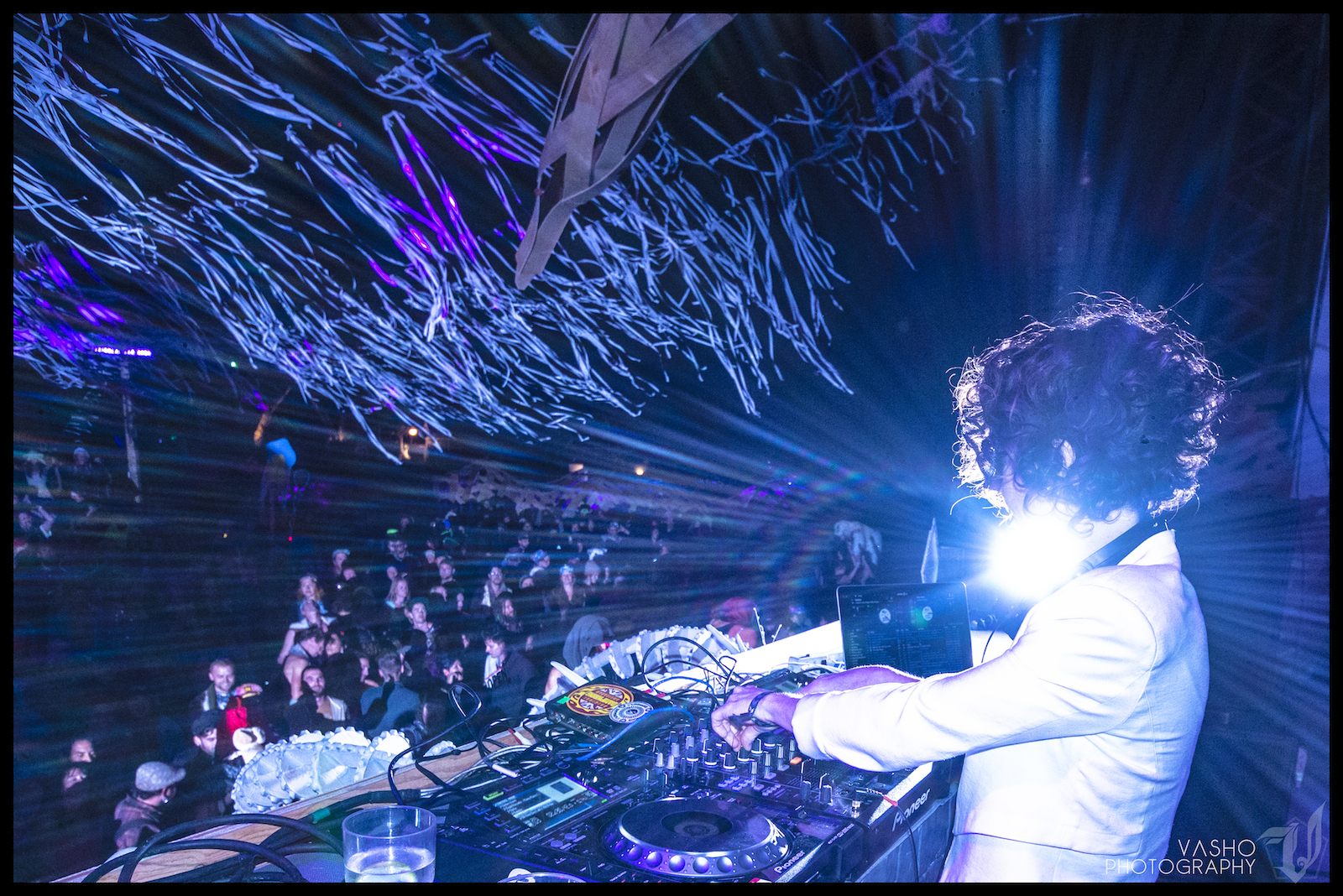 When asked whether there were any differences between Andrea The Librarian, Andrea the Bass Coast co-queen, and Andrea the mountain biker (her favorite hobby), Max shared that there wasn’t much of a difference at all: she doesn't like climbing hills, but she will do it anyway because she knows there is a job to do and the pitch is much easier on the way down. Danny Corn added that Andrea the mountain biker is much muddier. She’s one badass librarian.

It’s all in her attitude. She is focused on the vision, not on obstacles in her way. She has a reputation for never entertaining negative, self-doubting thoughts. Andrea has incredible mental strength. Those surrounding her have learned by example that moving forward, as though there is no issue, usually works out.

A few years ago at Bass Coast, she fell off of a platform, broke a bone, went to the hospital, and was back in time to play her set. Some would call this crazy; her friends call this determination. Of course she follows cues as to what works and what doesn’t work, but she doesn’t waste her energy focusing on what’s not working, and instead all of her energy goes toward getting work done. Like a boss.

My conversations with Paul Brooks, Crystal Precious of Sweet Soul Burlesque, Willisist of Shah DJs, and Samantha (Blondtron) Mathews really helped me to understand what makes Andrea such a great leader: She has developed and shared a belief system that others want to get behind: one that holds that festivals are inherently political, that contributions deserve compensation, that all people and their personal expressions of art have value, and that the west coast festival community deserves to be showcased and to grow and be inspired from within and without. Bass Coast stands as proof that a small team can build something huge if people are treated with fairness and equity, and remain solutions-oriented toward a common goal.

Those who work with Andrea share similar sentiments of admiration, respect, privilege, and honor. Those are some feel-good feels right there, but these feels are not used as currency.

As the person in charge of the business side of Bass Coast, one remarkable thing Andrea does is she pays her artists fairly. She recognizes and honors people and their process of growth by rehiring the same people year after year, and not undercutting them. She is not flexing the “prestige of playing at Bass Coast” to get people to do unpaid or underpaid labour. “What she upholds is less about DJ glorification, and more about supporting a multidisciplinary community,” says friend and performer, Crystal Precious. This is the kind of organization people want to get involved in.

Blondtron (Samantha Mathews) didn’t expect to be paid at Bass Coast 3 after being squeezed into the lineup last-minute, to play her first-ever festival set. After her set, Andrea handed her an envelope with her cut.

“That experience really set the precedent for my worth in the scene, and for me personally," said Blondtron. "I thought ‘Wow, I have value.’ The statement that this makes to the community is that everyone deserves to be compensated for their work. From the beginning, I felt like I found my community. I attribute a lot of my success to Andrea and Liz. Knowing my worth was being shown my worth. This was a real Aha! moment for me as an artist and as a woman.” 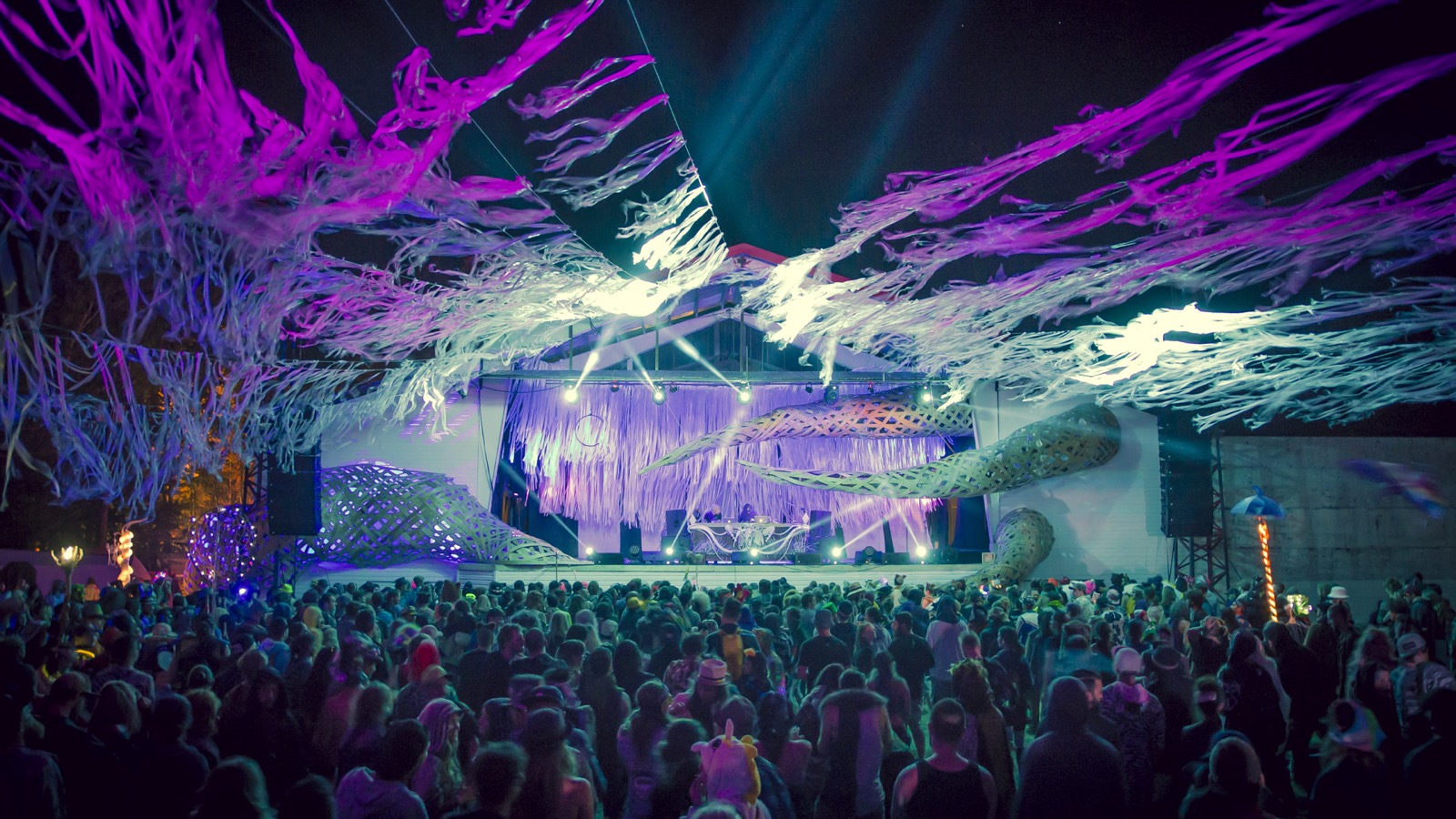 Blondtron’s experience serves as a great example of the effect this ethos has on artists as a whole and showcases an often overlooked aspect that sets Bass Coast and its founders apart: Everyone is compensated. Andrea (and co-founder Liz) understand that we are operating within a monetary system, with capital demands, and instead of trying to sidestep this reality by offering prestige as currency, they have managed to use payment as a tool to uplift and honor their artists. It is a bold stand, and a political statement: Andrea and her team won’t shy away from responsible, equitable treatment, because that just doesn’t make sense.

Another example of Andrea’s, and Bass Coast’s, political ethos is their ban of headdresses at the festival. They are the first festival to take this stand, which serves as a great example of what it is to really listen to, and not dismiss, the experiences of others. Andrea, as the ears of the festival, not only curates music and takes care of sound production, but also listens carefully to the needs of those affected by her festival’s culture. The sense of dishonor and disrespect evoked in North America’s indigenous peoples overrides any individual’s satisfaction in the aesthetic of cultural appropriation. This a grand demonstration of Bass Coast’s humanity, and encourages a culture of sensitivity and respect. Now that’s deserving of All-Star status.

When asked what she thought made her an All-Star in the festival scene, Andrea just said, “I don’t know how to answer that!” More comfortable leaving these accolades up to her witnesses, Andrea shows a humble confidence. Her work speaks for itself, and those close to her speak with love.

“Andrea is a funny, intelligent, creative, honest and loving person and I am lucky to have her as my friend," said Danny Corn. "Being around her inspires me to be the best version of myself.”

Andrea is not one to use All-Star status for selfish gains, but uses her influence to challenge others to be their best selves, and is in turn sending ripples through the festival community globally.

“In her presence you are inspired to find out who you are, build on it, express it; do it and don't hold back," Willisist, of Shah DJs. "I wish there was a way for every human to have a chance to get to know and be inspired by Andrea. I feel lucky that I am one of those.”

A talented artist, and an inspiring leader, Andrea has made a place for herself in the hearts of many, and likewise holds space in her heart for them, too. Always-friendly and always-open, this kind and courageous woman deserves accolades not only for what she does, but how she makes her community feel: important, valued, part of something great.