Amidst the lush Woodlands of Dover, Delaware, music lovers from the Northeast region and beyond gather every year for the unforgettable experience that is Firefly Music Festival. The fest, run expertly by Red Frog Events, has gathered the biggest and most up-and-coming talent for lineups that have consistently dazzled festival-goers since 2012. But beyond the music, the festival evokes the classic, carefree vibe of summer with long days filled with adventure, camping and communing with nature, and warm nights spent with friends just dancing or being silly.

At the end of any festival weekend, though, we always look back and realize that, at a festival like Firefly, it's the music that binds us together. Especially when the music was partially handpicked by you, the attendee. A couple of years back, Firefly began an unprecedented campaign to engage its fans by asking them to help curate the next year's lineup, and the result was a more-diverse-than-usual roster of names. Even Bob Dylan played! This year, even more aspects of the festival were determined by fans, including on-site attractions, food and drink.

So it should be no surprise that Firefly's 2018 lineup contains plenty of the most buzzed-about artists making the rounds today, such as legendary rappers Eminem and Kendrick Lamar; dance music kings ODESZA; and comeback rockers Arctic Monkeys and The Killers. The lineup also features everyone's favorite R&B goddess SZA; alt-rock giants Portugal. The Man, MGMT, and Jimmy Eat World; singer-songwriter Vance Joy, and more than 135 additional acts. Take a peek at the full lineup, by day, below. 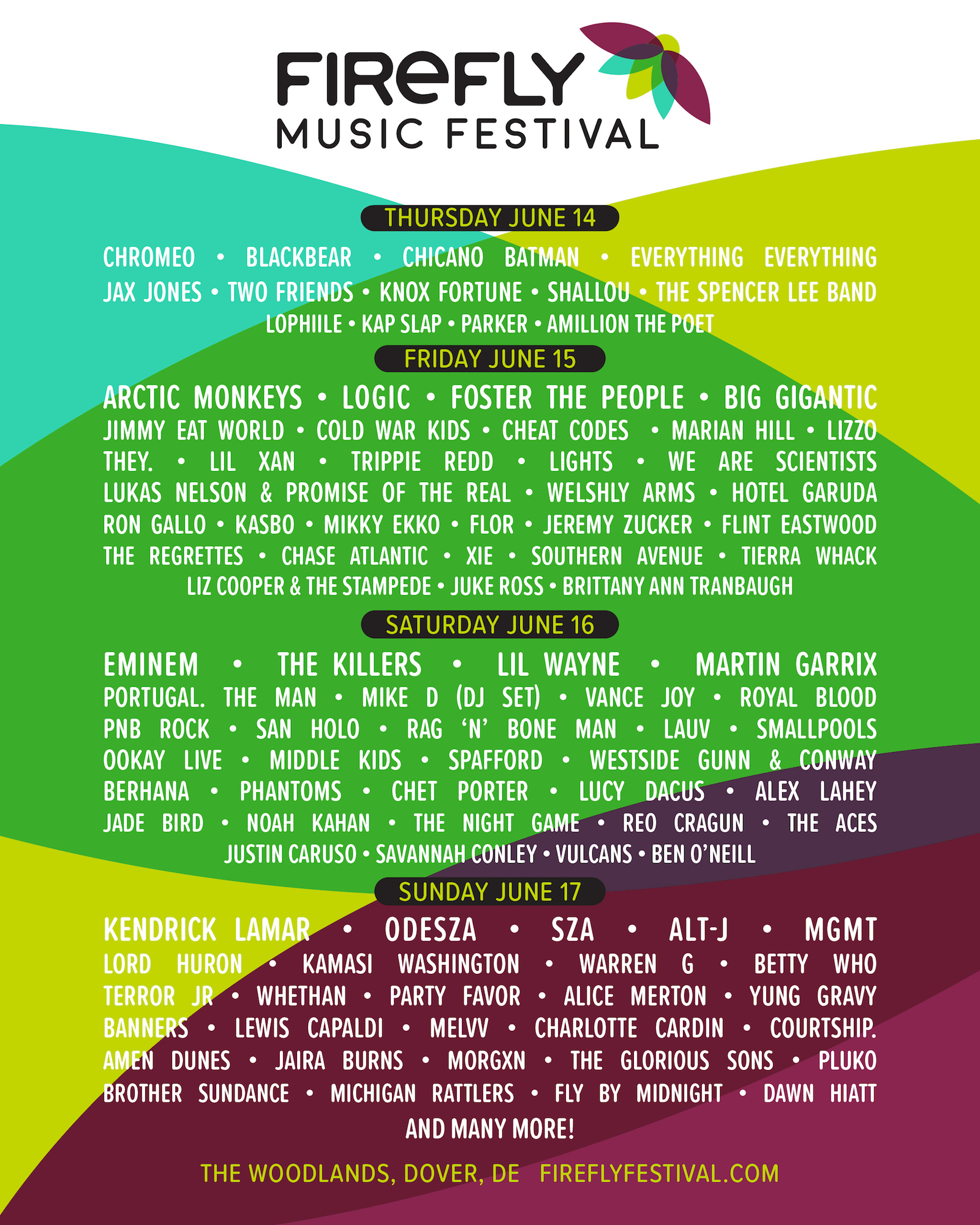 In between life-changing performances, don't just sit around. There are so many things to discover amongst the foliage and winding paths of The Woodlands, such as a dedicated space for hammock chilling with your crew in The Nook; acoustic performances at Treehouse Sessions; silent disco ragers at The Thicket; delicious beverages and super-intimate performances at The Coffee House; craft beers galore at The Brewery; a tremendous range of artisanal vendors at The Market; and lighting installations that come alive at night in The Pathway.

Go for the music, stay for the new friends, bustling campgrounds, and adventures, and leave with sunkissed, moonlit memories that'll define your entire summer.

Firefly Music Festival takes place June 14-17, 2018 at The Woodlands in Dover, Delaware. Get GA tickets at Early Bird pricing or $100 off VIP with Everfest Premium.