Flying Higher Than a Dervish: Hot Air Ballooning in Cappodacia 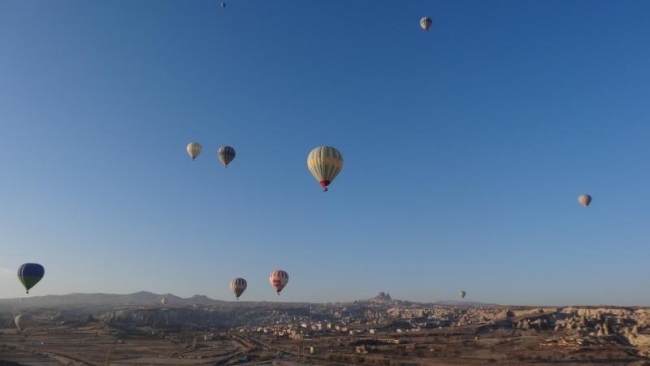 More than 100 balloons fly over Cappodocia at the same time.

Before going to the land of weird rock formations, the number one piece of advice I’d gotten was to book a hot-air balloon. I had my concerns. First off, it costs more than $200 per person. Secondly, they pick you up at your hotel just after 5:30 a.m. Thirdly, what if one of the dozen other folks you’re sharing the basket with is a psychopath? There’s only a three-foot basket wall separating you from the 6,000-foot drop to the ground. Despite these reservations, I took the plunge (bad metaphor) and went up, up, and away.

The one thing I hadn’t planned on — and that I vigorously recommend to you —  is dressing warmly. I hadn’t fully fathomed how cold it would be almost 10,000 feet in the air in mid-December before the sun rises (the elevation of Cappodocia is around 3,500 feet on the ground). As gorgeous as the view was for the nearly ninety-minute trip, I started feeling frostbitten about one-third of the way through our journey. And, then, I had to use the loo and, of course, that’s forbidden up there. I imagined tinkling down my pants might solve both of these dilemmas but it would have created a new one: public embarrassment with nowhere to hide.

The highlight of the trip isn’t the heights, it’s when the balloon descends into the valleys so that you can get up close and personal with the rocks. I found what’s called Imagination Valley to be a bit of a Rorschach test. There’s a rock formation that looks like a camel…or is it a cat? There’s a sexy woman in a flowing dress dancing with her son. Oops, that’s a little too Oedipal to mention to my basket mates. And, when we finally swooped down into Mushroom Valley where monks lived in what – excuse me for saying this – look like rock erections formed like enlarged male genitalia, I couldn’t help but call this Valley of the Large Penises. Fortunately, the Chinese and Korean compatriots on this trip couldn’t understand a word I was saying.