Going Deep with the Dervishes

As seen on  AFAR

Rumi’s life changed when he created an intense friendship with an older, wandering mystic named Shams of Tabriz. Shams was a brilliant outcast and Rumi was deeply drawn to a learning relationship with this man who was ultimately supposedly killed by some of Rumi’s fans due to the influence he was having on the younger Rumi. From this tragedy, Rumi found a deep well inside himself filled with an ability to channel poetry. It was about this time that he also introduced the experience of divine harmony that comes from whirling. Thus, a new form of religious ecstasy was created and the Whirling Dervishes (also known as the Mevlevi order) have been doing this annual ceremony marking Rumi’s death for almost 750 years.

I was fortunate to get front row seats for the first of the three Dervish ceremonies I attended so that I could take all of the photos. These two photos show the start of the Sema (the ceremony) with each Semazen (dancer) bowing upon arriving on stage and the Semazen Basi (the leader) being at the “head of the class.” The mesmerizing ceremony represents man’s journey to the oneness of perfect truth – amidst separation and longing – through the power of divine love. In 2005, UNESCO proclaimed the “Mevlevi Sema Ceremony” as amongst the Masterpieces of the Oral and Intangible Heritage of Humanity. 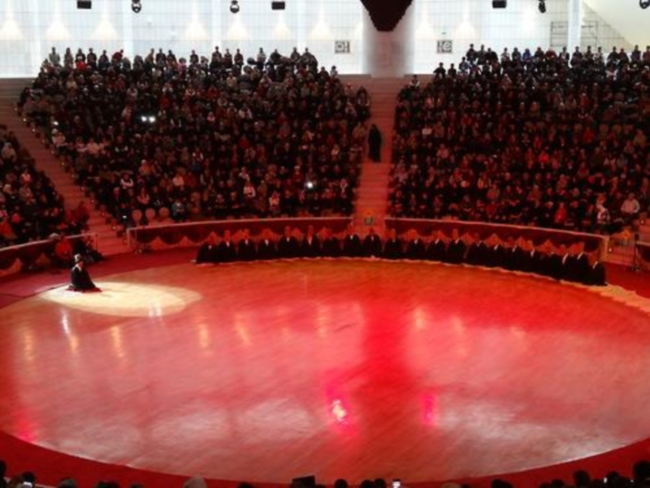 The Dervishes before the drop their black cloaks to whirl.