Postcards From Fabulous Lightning in a Bottle

I remember last year at Lightning in a Bottle , suddenly noticing that the backdrop of tHe gRaNd aRtiQue stage was actually the electric lights of the Woogie Stage in the distance. I thought to myself, “could it really be so expertly planned?” The answer is yes. There is an attention to detail – from LiB's intricate, immersive realms to its wonderfully designed chill spaces around festival grounds, to every inch of each stage – that is unrivaled by event producers with far more capital and manpower. This has made Lightning a Bottle, which takes place over Memorial Day weekend near Bradley, California, not only the crown jewel of the west coast alternative circuit, but the envy of festival producers around the world.

The mad genius behind the Lightning in a Bottle aesthetic is Josh Flemming, one of three brothers at the core of the operation. The recipient of numerous design and architectural awards, Josh is as diligent and hands-on as he is uncompromising. “Could we have bought rope lights to string across the festival grounds?” his sibling Dede Flemming jokingly lamented. “Sure, but Josh’s vision required special handmade lanterns which cost a small fortune.”

It isn’t only the Flemming Brothers who make the event's landscape so magical. Lightning in a Bottle is a family affair with every space a dedicated work of love. Each expertly crafted environment gives attendees a unique sense of place which makes the whole festival feel like a choose-your-own-adventure book. From the sacred to the silly, LiB had something for everyone. David Sugalski, who performs as the Polish Ambassador, summed up the adventure nicely: “O man. I’m like a whispy dandelion floating in the wind at LiB. You never know where I’m going to be. You might unzip your camping bag, and BOOM, out pops the Polish Ambassador, sparkly jumpsuit and all. Dance party ensues, three hours later, we're all naked rolling around in a contact jam in the Temple. No, but really, I spend most of my time in The Village sipping delicious macha mocha pacha mama green tea jun smoothies from the good folks at Elixart.”

So without further ado, here are a few of our favorite vibes brought to you in beautiful high-definition postcards from our favorite photographers with accompanying vignettes from the LIB community. 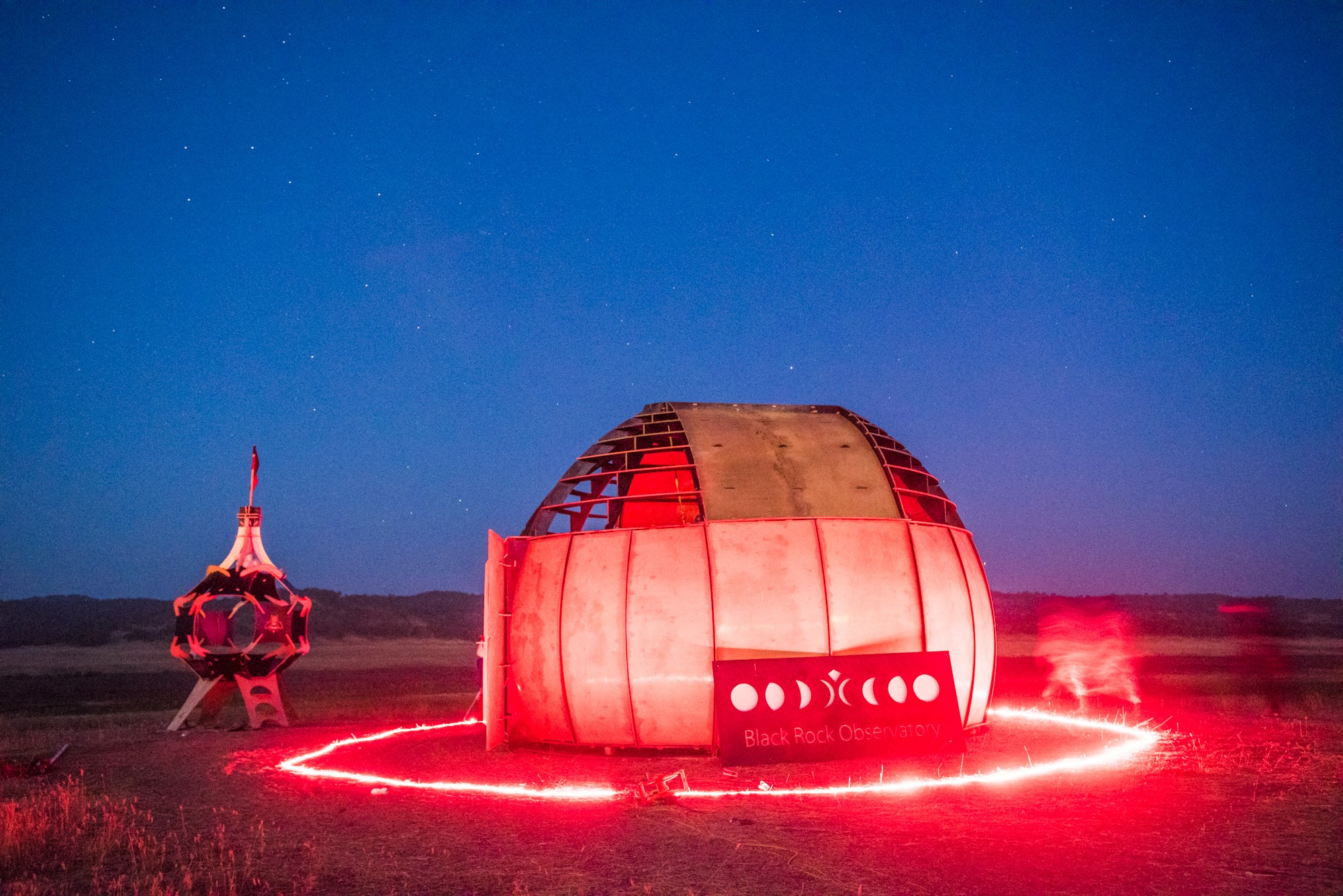 Just imagine a group of internationally versed astronomers and cosmos geeks, at a transformational gathering ready, willing, and able to field all of your cosmic quandaries however lucid or muddled they may be.

For the first time in my life, at Lightning in a Bottle, I saw the rings of Saturn, the ice caps on mars, and the bands on Jupiter all in one night. Thanks to Major Tom Varden and his crew of jolly star gazers.

I think it's amazing how they are weaving astronomy into a festival largely ruled astrology. There is a certain balance that we all must learn to walk – no one way of thinking is ever 100%. Everybody has the right to become an individual practitioner. Thus, it is important to introduce different schools of thought to the festival community and allow participants to form their own beliefs. Equip people with the knowledge they ask for, and allow them to build the temple they dream of.

Favela first and foremost for the MUSIC! Patricio curates the deep house just how I like it. So many great DJ's. I prefer the vibes there, as well as the music, and the atmosphere. I have had several epic moments, on different years, at Favela.

The Grand Artique is where I go when I want to travel back in time for a bit. I love the bright lights, electric sounds, futuristic landscapes and Dr. Seuss skylines of the rest of LIB, but sometimes ya just need to kick back and enjoy some old-timey tunes with great friends and strong whisky.

A festival is a great place to have interactive art in general. The moment a festival patron arrives they have begun to shed that layer of the burden of everyday life. There is a shared excitement for what is about to happen. Then after a day or two of existing in this new headspace of fun, sensory explosion, dehydrated, lack of sleep, dance tired bodies they find themselves moving away from the big stages and seeking the small. At this point, festival-goers are primed and ready to have their next layer of reality removed in an intimate, self-reflecting, participatory way. 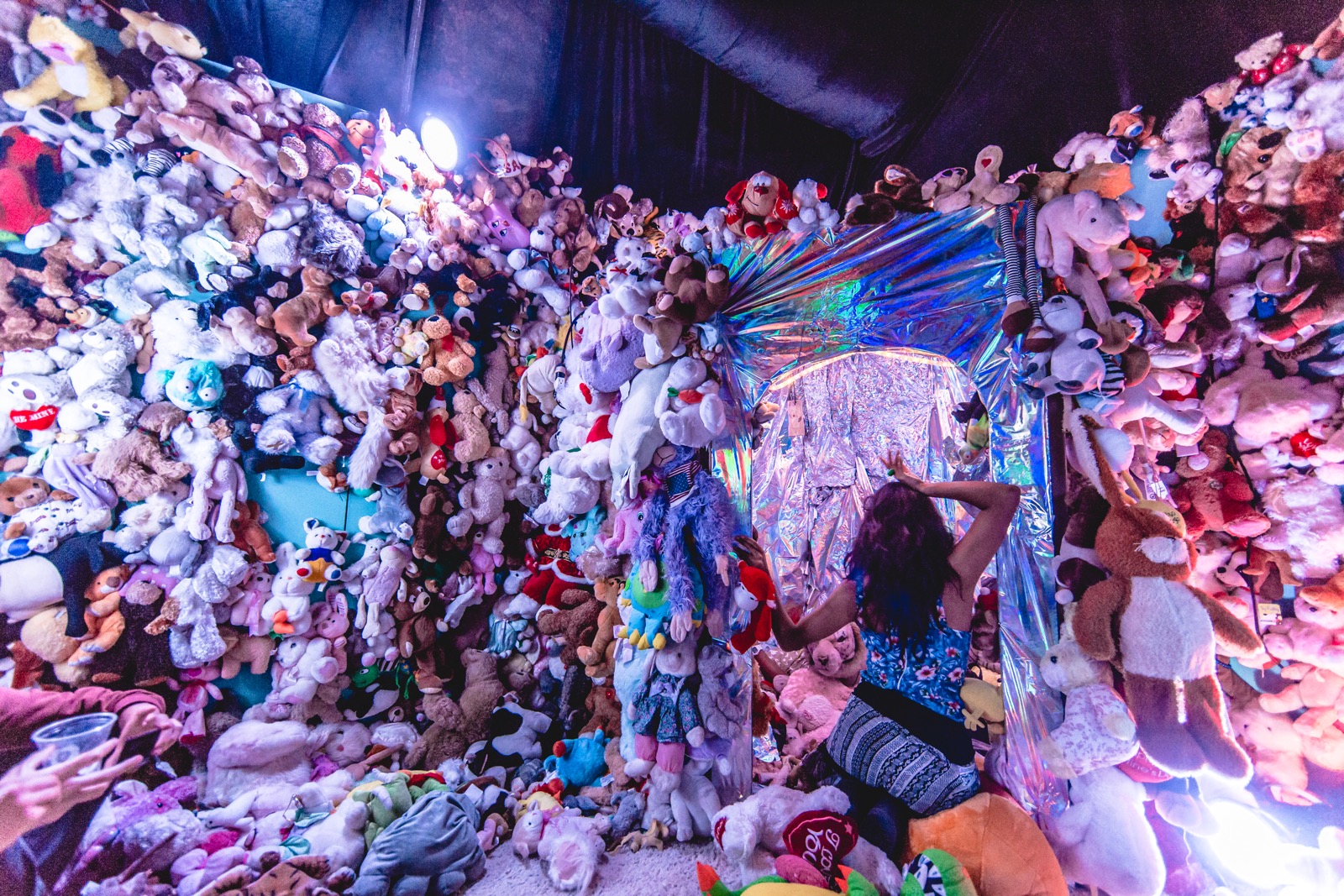 The Lightning Inn was an altered state of reality in the festival. A place which anyone could go to explore something different, where every door lead to a new mystery. Seeing people break the notion that they were there to be entertained and instead they could join in on the antics was really something special.

One of the best parts was having the kids really enjoying the Lightning Inn. We didn't realize how popular it would be with them as the second day we had a line of over 20 kids, with their parents, impatiently waiting for the hotel doors to open.

Sitting outside taking a breather I'm listening to kids reactions as the walk out of the place, when three kids walk out and one of them looks at the others and say "oh damn, back in the default world.

On Wednesday night my air mattress had failed and I ended up freezing my ass off on the ground. I had made a decision Thursday night to not go back to my tent till after 3 am, when the coldest part of the night had passed. Late Thursday night, I wandered into the Temple Stage to kill a little time. A guy named Cello Joe was playing and was absolutely killing it. He had five or six rappers freestyling with him.

As the night went on, I noticed a few people in the audience had blankets.I thought they were just really prepared people who had thought to bring their own. I said out loud to the people next to me, "man I wish I had one of those blankets." Just then, a woman came up to me and said, "you look cold" and wrapped me in a comfy, warm blanket. The people next to me said, "You manifested that!" We all shared the blanket and I also grabbed a pillow and a cushion for myself. I decided to close my eyes for a minute as it was just so flipping cozy and wonderful. I ended up sleeping through the rest of the night. In the morning, a DJ at the Temple woke us all up with "Retrograde" by James Blake. The sun was up and it was warm and wonderful. ...so yeah, the Temple Stage was my favorite location this year.

The festival is so densely packed with things to be stimulated by, and it was a great place to just block it out and recenter.

That and at night with all the dust in the air, you can watch the lasers overhead looking like they're being shot in pulses from laser guns.

It was surreal debuting our Dimond Saints seven-piece live show on the Thunder Stage to that wild crowd!

The Village I love for the community. I enjoy seeing it come together thru the superhuman efforts of a clan of folks from Nevada City, where I live. I LOVE the workshops, the permaculture, the aesthetic and ethos of the whole village, its look, its aura, vibrations and energy abound. I treasure the connections I made there, the smiles I received and gave, the hugs, and the dance parties that went on way into the night. I also really like the sublime beauty of the acoustic performances, while the rest of the event drowns in huge bass... I also am a huge proponent of, and participant in, the sacred fire.

Production-wise it was completely unique and a bold departure from their very finely tuned and time-honored aesthetic. The sound was fantastic and the vibes were always very high for the big acts.

PS: If you couldn't get enough Woogie, the Do LaB's micro festival spinoff Woogie Weekend is right around the corner.

You're Doing it Right, LaB

When I asked about other festivals which inspire the Do LaB, Dede praised the producers of Electric Picnic who he said were “just as gonzo” as they were. He once witnessed them whisking a busker off the streets of New York to perform at their festival in Ireland. “It’s that kind of mentality that isn’t bottom line driven, it doesn’t necessarily make sense. It’s just really cool.”

He could have also been describing Lightning in a Bottle. Festivals run by large conglomerates streamline efficiency which can be a boon to logistical ease. Yet, something is lost in these mega-productions. By their own admission the Do LaB has learned a great deal through their work with Golden Voice on Coachella . However, Dede wouldn’t trade the precise Do LaB aesthetic for Indio’s cavernous white tents. This is part of why we the love alternative west coast festivals for which LIB is a standard bearer. The money that a bigger organization would trim from the production budget is precisely what pays for the magic lightning that the Do LaB captures in their 30,000-person capacity bottle.