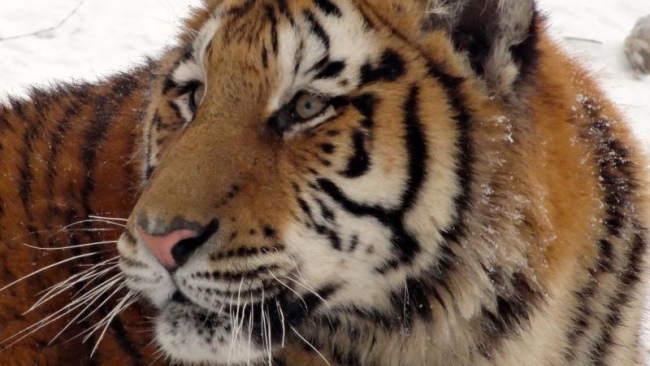 You’d think that an industrial Chinese city near the Siberian Russian border named after the Manchu phrase for “a place for drying fishing nets” would feel a little Podunk. It couldn’t be further from the truth. Yes, your first impression of Harbin may be monolithic communist urban planning gone mad – hundreds of 50-story apartment buildings all with the same faux European roofline and spaced just far enough apart to not create a sense of true pedestrian urban density. But, you’ve only hit the suburbs at that point. 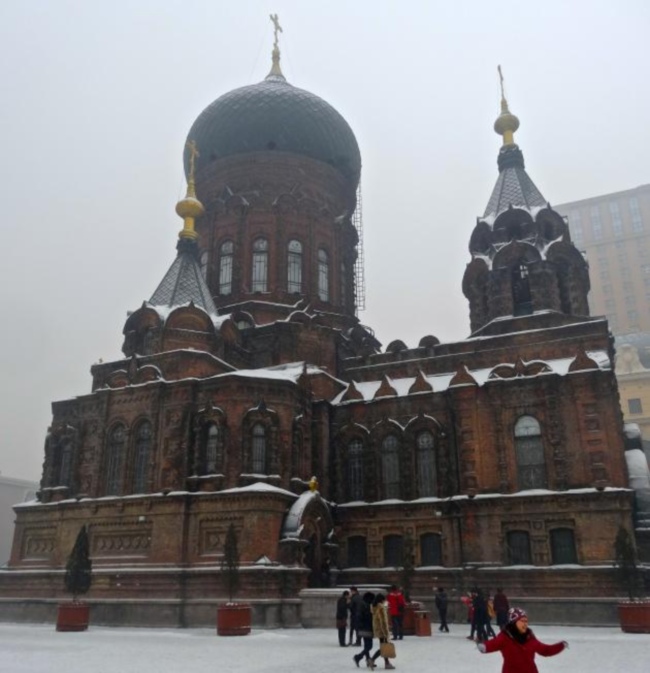 When you get into the center of the city, you’ll be struck with a number of surprises: a handful of Russian influences, as in the 1920s one-third of the population was Russian, monumental boulevards and well-executed European style architecture that has earned Harbin the name “Paris of the Orient,” and many more people and cars than you ever imagined. There are more than 5 million people in this city and there are hundreds of building cranes constructing new skyscrapers, as Harbin is one of the primary metro areas where the Chinese government is repopulating peasants from the country. You see the aspirational name Manhattan pop-up on many buildings: hotels, shopping centers, even restaurants. There’s a desire to be cosmopolitan here even though the origins of the place come from dried fishing nets. 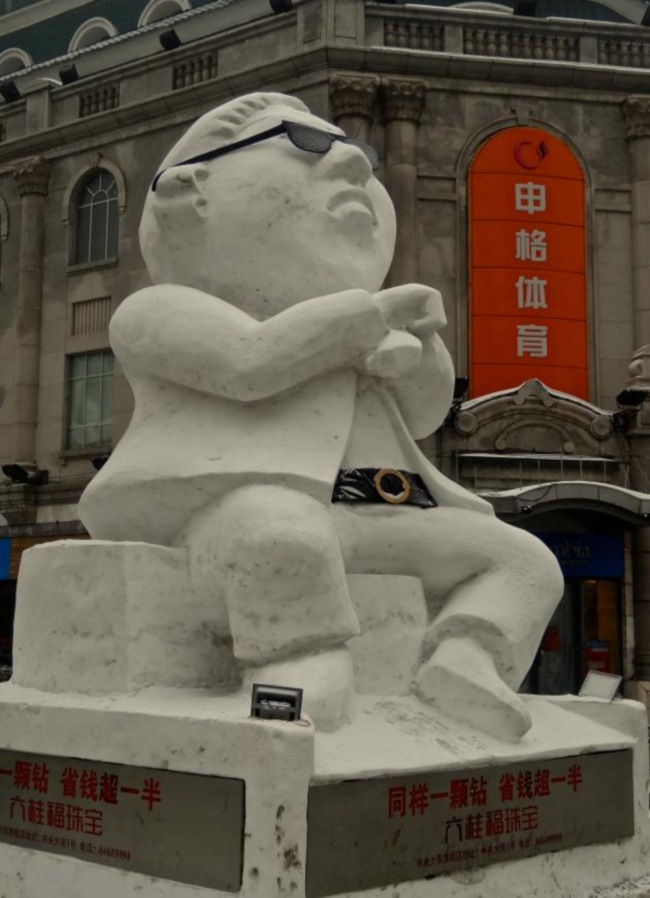 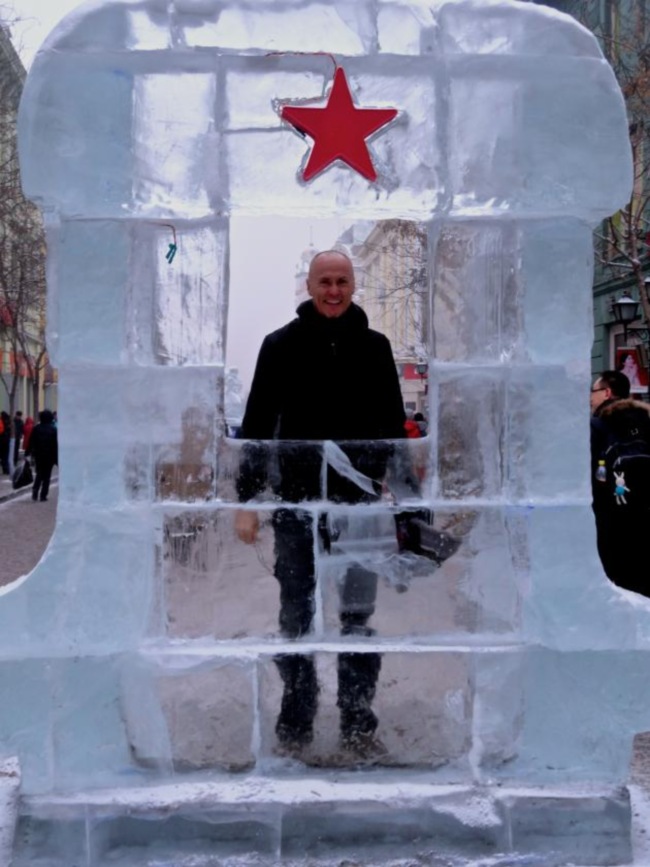 Framed by the Chinese on lovely Central Avenue

Harbin’s Siberian Tiger Park is worth a visit, as it’s credited with saving the majestic Liger from extinction. And you absolutely must head to the Songhua River to watch either the 9 am or 1:30 pm daily show of two-dozen crazy older folks going for a swim in the frozen river. The temperature outside was 10 below zero the day I witnessed this crazy exercise, but I guess jumping into water that’s 20 degrees above zero is an improvement if all you’re wearing is a skimpy bathing suit. 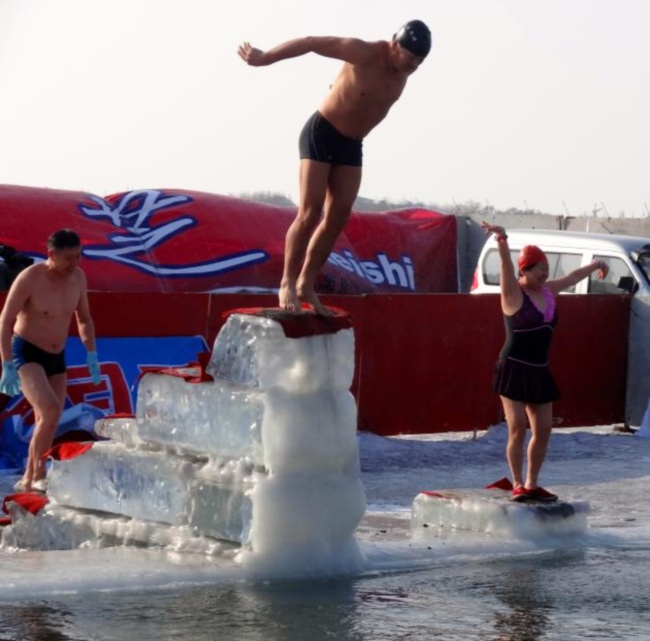 My hand nearly got frostbitten taking this photo. Can only imagine what’s getting frostbitten under that Speedo

While I did three days, two nights here, you could spend more time. There’s the Yabuli alpine skiing area, skating and sledding, and some big-time shopping. This is also the place to start the Trans-Siberian Railway to Moscow. But, as much as Harbin has gone cosmo on us, it’s still an isolated city that rarely sees a guy like me. Twice during my stay, I had people ask me for an autograph (one thinking I was Tom Cruise; that person seriously needs glasses) based upon the premise, I guess, that all Americans are celebrities. Oddly, amidst a city where maybe only 10% of the population understands a word of English, the number one advertiser I saw all over town was the National Basketball Association-sponsored local Harbin brewery. No one mistook me for Shaquille O’Neill. 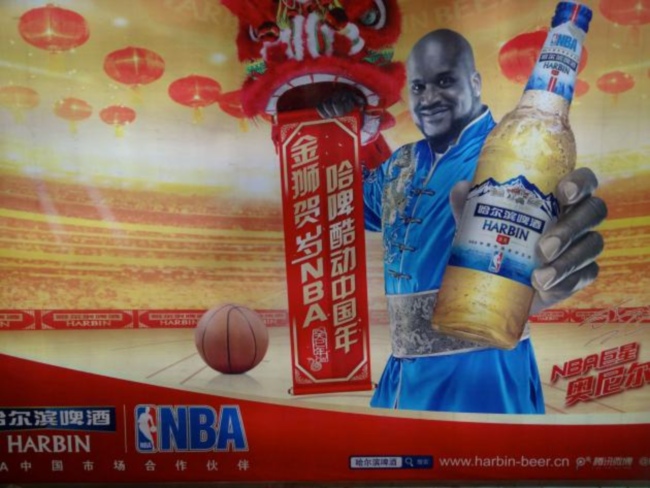 Was surprised to see the NBA growing its brand so far from the U.S.