Harm reduction has become a prevalent topic for the festival community. Transformational festivals like Shambhala and Lightning In a Bottle are paving the way for harm reduction programs and education, which aren't as often seen at other music festivals, specifically EDM festivals in the United States.

Harm reduction efforts like on-site drug checking and psychedelic first aid services have proven effective in educating attendees about safe festing and decreasing drug-related incidents. "By providing these services, there have been way less incidents," said Stacey Lock, Shambhala’s Harm Reduction Director, in an interview with THUMP. "When we greet everybody at the gate, we tell them where the health and wellbeing zone is, and remind them that you can always dose up but not dose down."

Drug checking services have also been utilized successfully in European nations for decades and these services can help prevent deaths at music festivals. "People change their behavior at the point of consumption. If they get a bad pill, they choose not to take it. If you do it over a prolonged period of time at the same event, we find that the attitude toward drugs change," said Dr. David Caldicott , senior lecturer in the Faculty of Medicine at the Australian National University.

If these services are working for Shambhala, Lightning In a Bottle, and European festivals, why can’t EDM festivals like HARD Summer and Electric Daisy Carnival adopt similar practices? It’s not as simple as we think. U.S. Festivals held on public, county-owned property, which are permitted by local government authorities, are often operating under the scrutiny of these parties and with trepidation of the RAVE act . "Unfortunately some people view partnering with DanceSafe as endorsing drug use rather than keeping people safe, and that can prevent producers from getting locations and organizing events,” Pasquale Rotella, founder of Insomniac Events, has said in a Reddit AMA. Last year, the DanceSafe booth was shut down at Electric Forest because the promoters felt their distribution of informational material were "too promotional." The Bunk Police were ejected from Bonnaroo under similar circumstances last year. 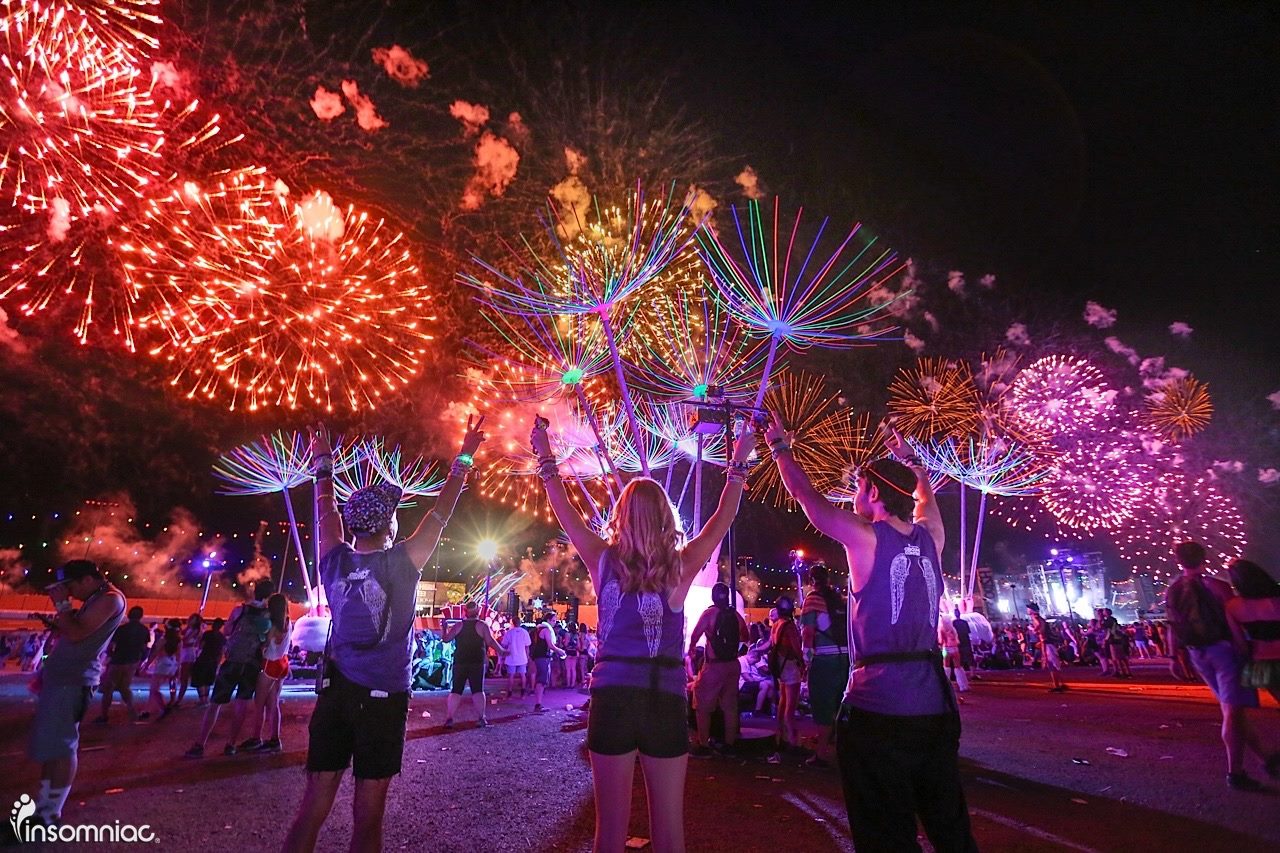 In 2009, Rotella attempted to offer drug education at his festivals but had trouble winning support from local authorities, who can also deny permits for the events. A New York Times article states Rotella made a video featuring DJs A-Trak, Kaskade, and Steve Aoki warning concertgoers not to “play around with ecstasy.” The video was later rejected by Los Angeles County officials for promoting drug use.

Despite its unsuccessful attempt in 2009, Insomniac is now truly setting a medical standard for EDM festivals today. The organization provides state-of-the-art medical facilities onsite at EDC Las Vegas, with health and safety services and harm reduction efforts to make the event safer for Headliners. “Fan safety has always been our number one priority,” says Maren Steiner, Director of Health and Safety for Insomniac Events. As part of its health and safety plan, Insomniac works with C&C Medical Events and MidWest, a subsidiary of American Medical Response, to provide doctors, nurses, physicians, assistants and medical staff members – the Las Vegas Review Journal reports seven doctors, two physician assistants, 17 nurses and scores of paramedics tending to patients at last year’s festival – for the event's 420,000 festival-goers. 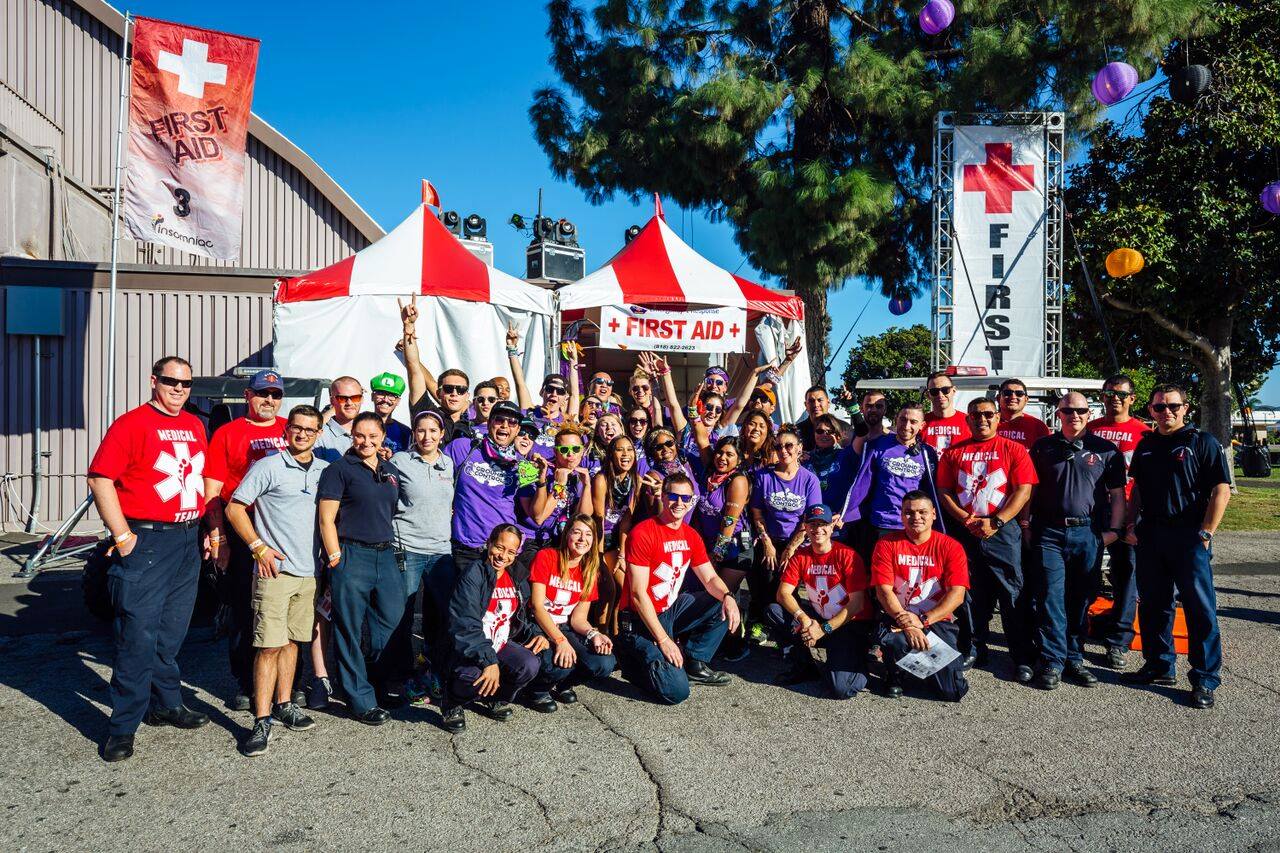 “We pride ourselves on having an industry-leading safety program, and we are constantly looking at ways to improve our proactive response to safety issues,” says Steiner . If you’ve ever been to an Insomniac festival, then you may know about Ground Control , a collective of ravers who roam the venue in bright purple tanks ensuring the safety of each festival-goer. What started out as a festival-goer’s love for helping others became a movement that would eventually operate alongside official medical personnel at Insomniac events.

“MedicWest’s personnel fan out across the venue and work in tandem with EDC’s Ground Control, about 200 people who work in groups carrying radios, lights and bandages. The ground controllers check portable toilets to make sure no one is unconscious inside, question fans to ensure they have enough water and act as the eyes and ears for medics and security crews,” wrote Stephen Moore for the Las Vegas Review Journal. Ground Control also staffs four water refill stations located at the venue, where Headliners can get free, filtered water. Free water has become a key player in Insomniac’s harm reduction/health and safety initiative.

When asked about other harm reduction efforts, Laura Newton, the founder of Ground Control, talks about the Insomniac Consciousness Group , where sober ravers can get support three times a day at EDC Las Vegas and at other festivals. In fact, the volunteer-based group was born at EDC Las Vegas in 2013.

“Consciousness Group came together when two young men who I mentor were going to raves in their first year of sobriety about three times a week,” said Patt Ochoa, the head of the group, in an Insomniac interview. “They were really struggling with being sober and continuing to do what they loved, which was electronic music. It was a struggle for them to stay sober in a constant environment where there was a lot of drug and alcohol use.” 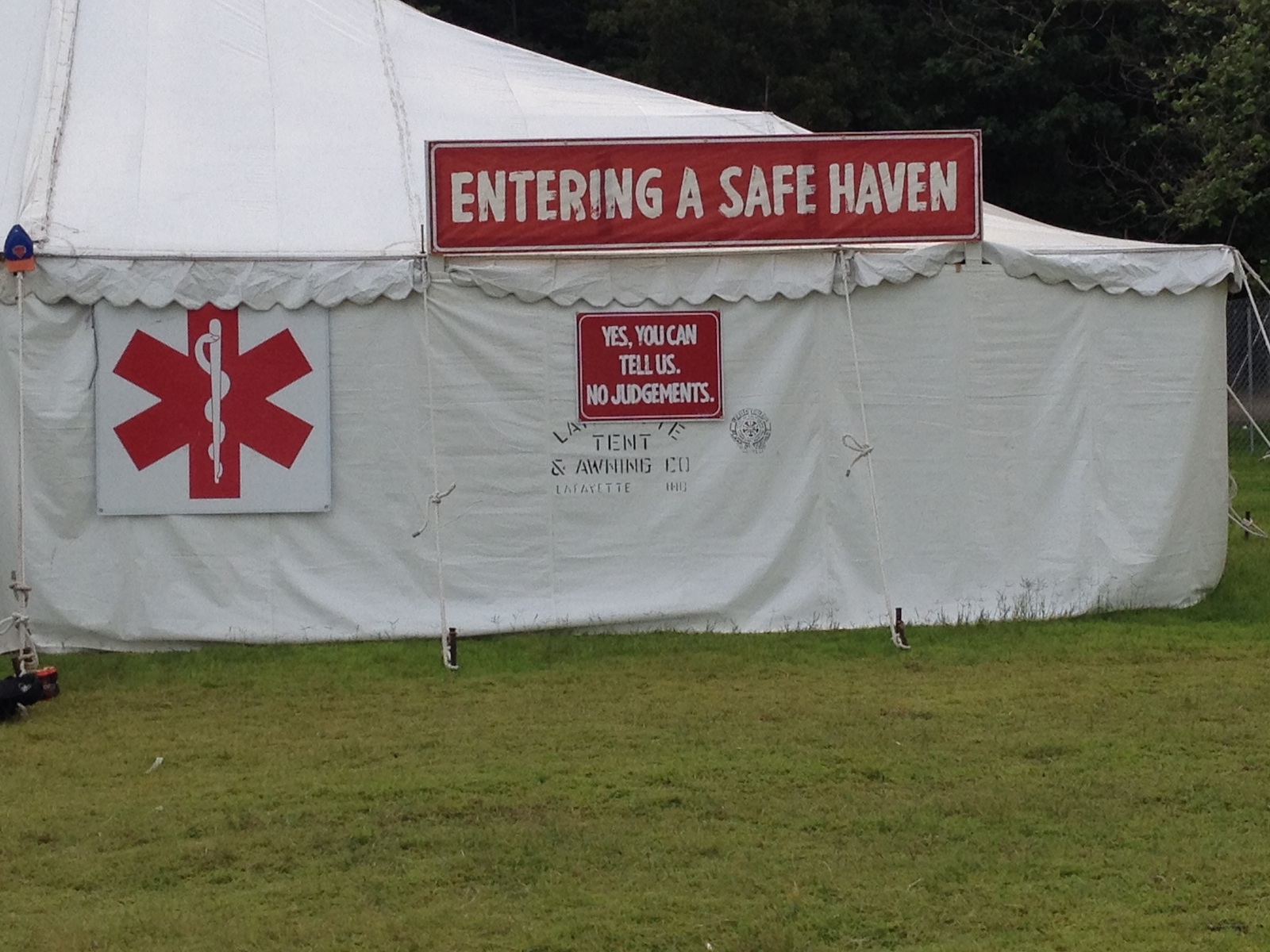 Despite state-of-the-art medical facilities, hundreds of safety personnel staffed for EDC, and targeted harm reduction programs, there’s still an elephant in the room. “There’s a myth out there that people will be arrested for seeking medical attention and we’re partnering with local law enforcement agencies to educate our fans that this is absolutely not the case,” says Steiner. “Everyone from the security guard at the gate all the way to the police officer protecting the backstage area wants to help you. You just have to not be afraid to speak up.” So no, you won’t get in trouble if you bring someone overdosing to the medical tent. It is quite a challenge, but groups like Ground Control and friendly security and medical staff are combatting this hurdle so that Headliners can party safely with the comfort of knowing that someone is looking out after them.

To jumpstart this conversation, Insomniac initiated their #WeAreWideAwake campaign to start a conversation around this common misconception. It features a video (above) of artists, fellow ravers, and Insomniac staff members promoting harm reduction and pushing everyone to look after one another at festivals.

With EDC Las Vegas occurring a a few short days, Headliners need to educate themselves and their peers on harm reduction in order to have the best and safest experience during EDC’s 20th run. If we exhibit steps to reduce harm, which includes feeling comfortable asking for help when help is needed, we can expect to see increases in safety at festivals. “Stay wide awake and together we can make a difference,” says Martin Garrix at the close of the #WeAreWideAwake video.

Here are steps you can take to keep yourself and your peers safe at this week’s EDC Las Vegas and beyond:

Harm reduction efforts only work when we talk about them. Share DanceSafe’s message and harm reduction literature with your friends, help those who may need medical attention and assure them that they won’t get in trouble. 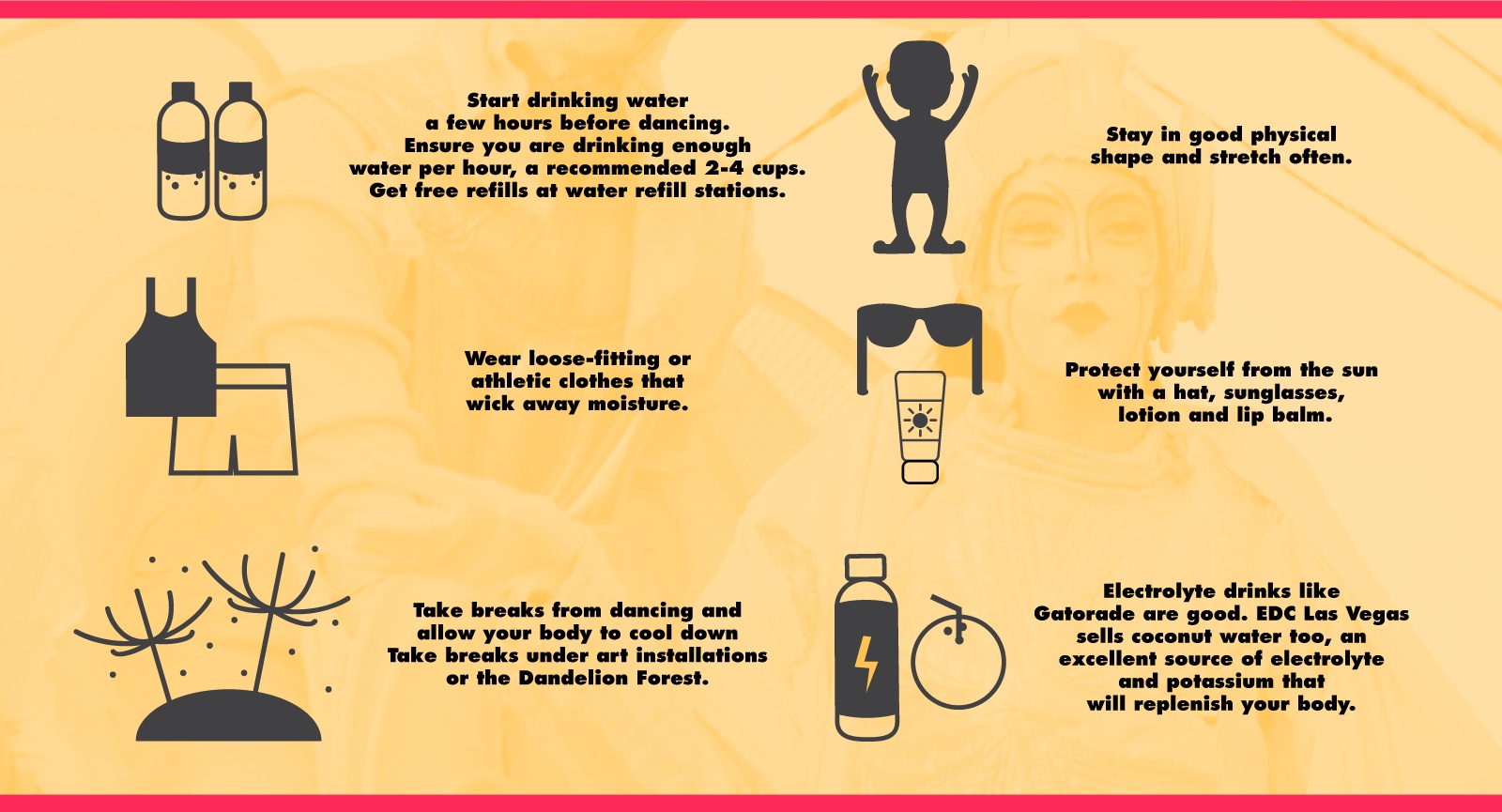 Dancing for extended periods of time leads to dehydration and heatstroke, with the latter being the most dangerous. Thus when you’re dancing, whether you’re under the influence or not, it becomes difficult to recognize symptoms of heatstroke.

Know the Symptoms of Heatstroke

Given the heat at EDC Las Vegas, everyone become more susceptible heatstroke and even heat exhaustion. Keep your eyes peeled for anyone experiencing the symptoms above.

Pay Attention to Signs of Distress

It takes a friend to save a fellow festie in need. Know the signs of distress so you can take action “as soon as perfect, not as soon as possible,” as Ground Control’s mantra states. “Through our work with the Brent Shapiro Foundation, every single guest who comes through our entrance gate gets information in our festival guide on what signs and symptoms to look for when someone might need help and what to do to get someone the assistance that they need,” says Maren Steiner.

A good rule of thumb is to always drink double the amount of water you think you need.

Know Where the Medical Tent Is

It never hurts to know the lay of the land. 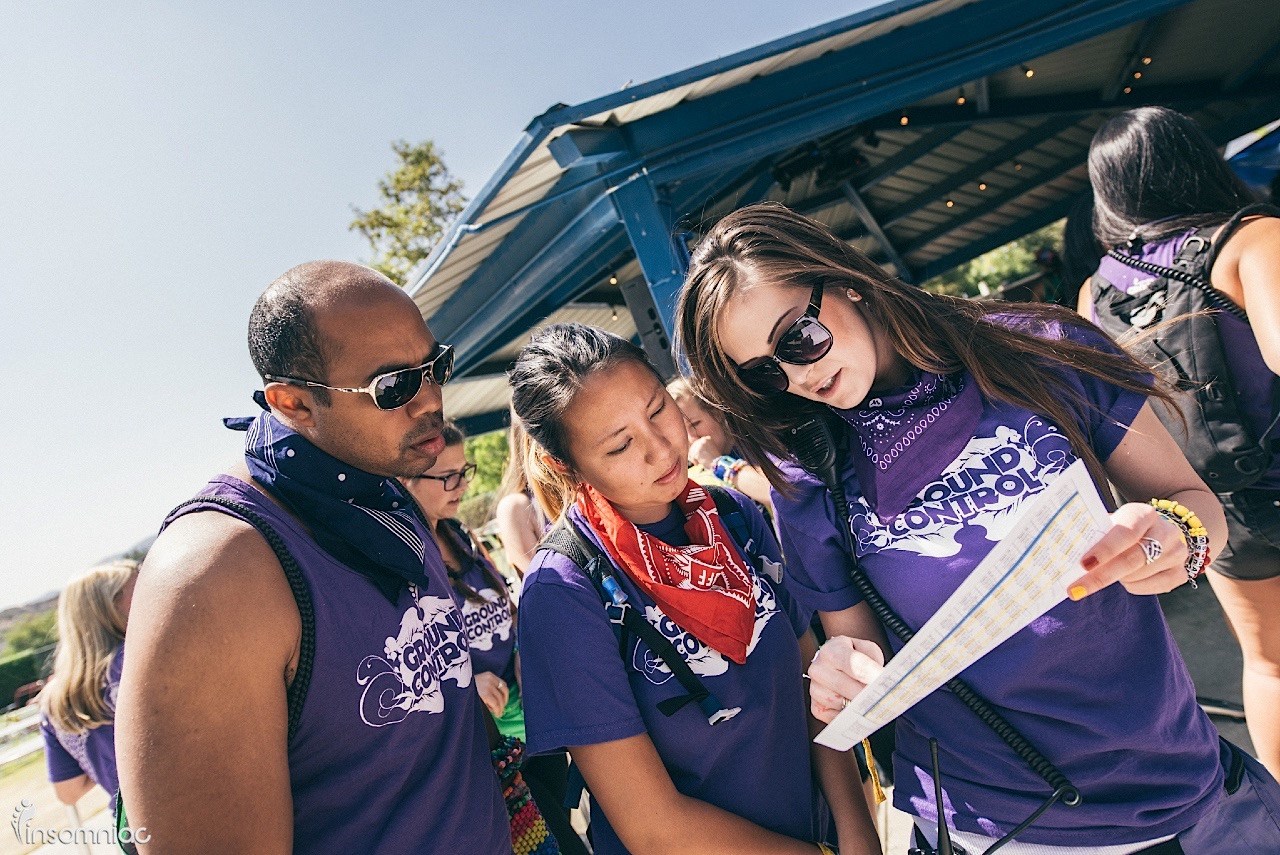 Dressed in purple tanks, these friendly faces rove in packs to help Headliners in need. Whether you need medical attention or simple directions to the next stage, you can count on Ground Control to keep you happy, healthy, and hydrated. 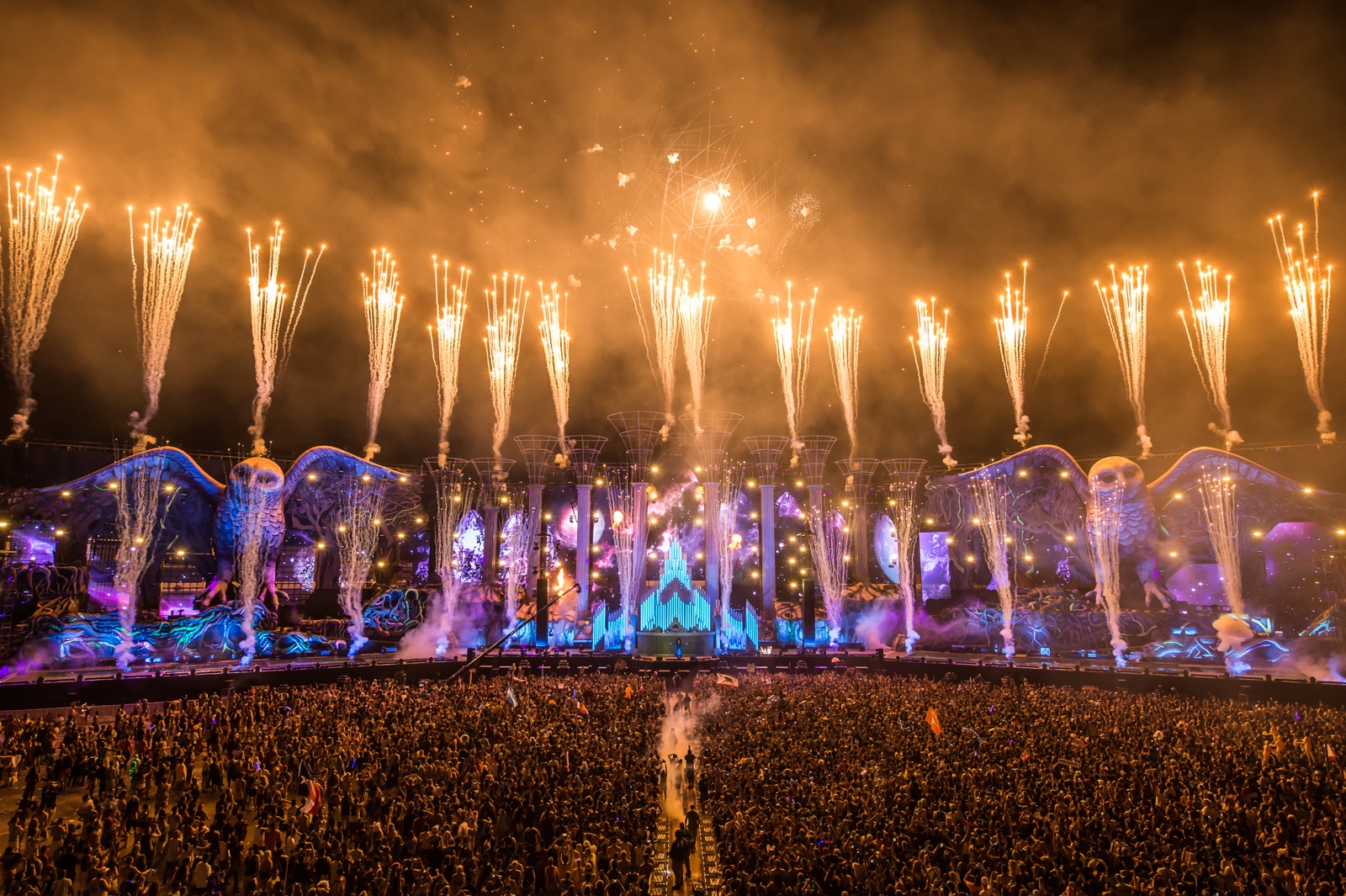 The post-festival hour can be tough, especially with thousands of people leaving the site at once. Make sure you stock up on water or last-minute snacks so that you’re rehydrating and refueling while waiting to exit. Give your face and neck a splash or two to cool your body down, whether or not you powered through the last set. 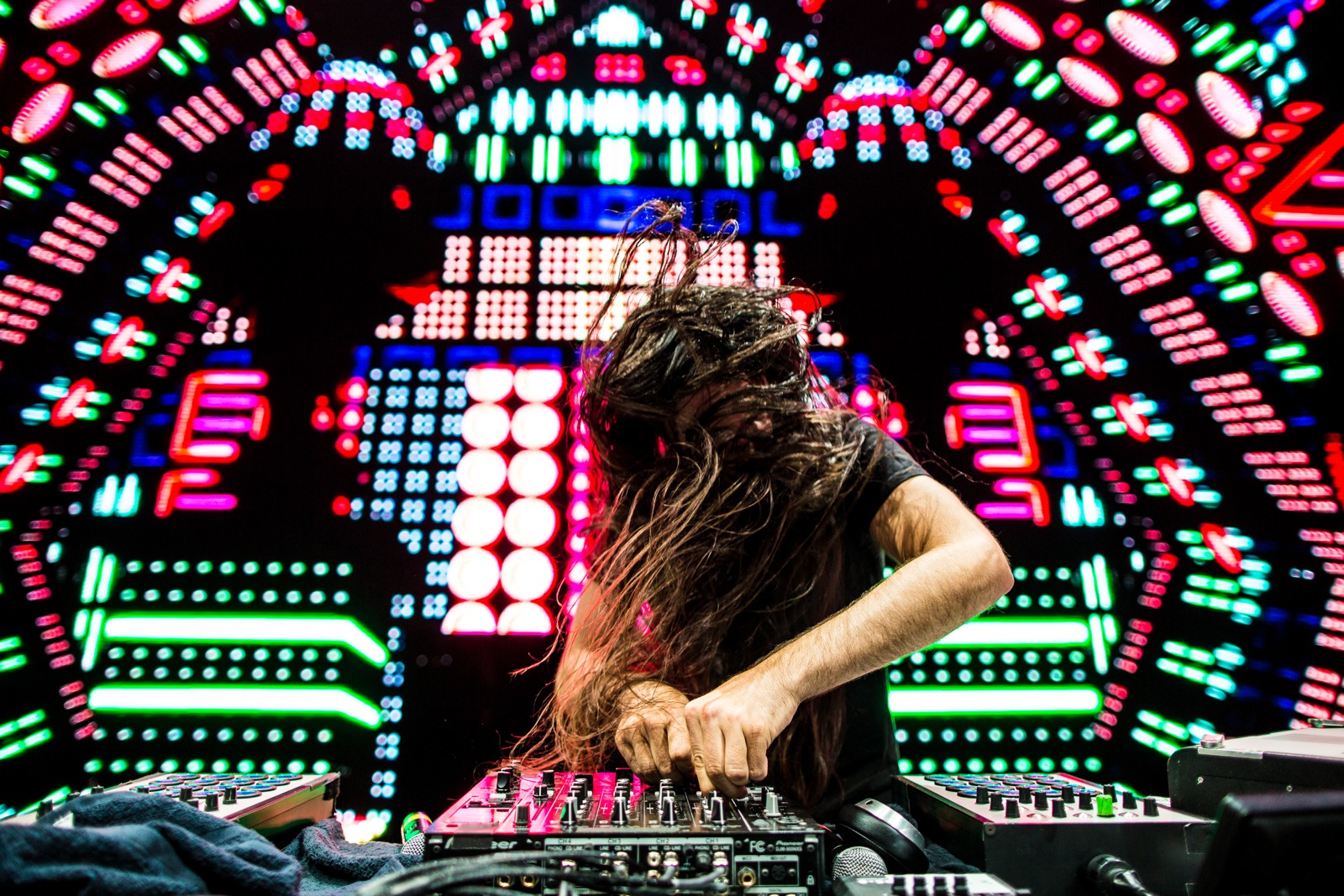 Photo by: aLIVE for Insomniac

Continuous exposure to noise above 85 decibels can cause hearing loss. Most music festivals blast music at 100 decibels or higher, so if you’re front and center without proper hearing protection you might be at risk. Protect your ears so that you can enjoy festivals in the future.