In my long career of festival-going, there have been several times my friends and I had gaps in our schedules during which we didn’t know what to do. While we couldn’t decide on which artists to catch during our free time, we also weren’t ready to say “eff it” and check out a random set. This is probably familiar to you, and definitely to thousands of festival-goers, whether you're attending Sasquatch!, Coachella, or  Glastonbury. But this past weekend at the 8th annual Outside Lands in San Francisco’s Golden Gate Park, the solution to this dilemma came in the form of Dave Sent Me, a feature on the festival’s app that recommends new bands based on other bands the users like in order to fill those maddening festival schedule gaps.

Dave Sent Me was the winner of Outside Hacks hackathon , an annual event whose aim is to harness the power of technology to increase the quality of the Outside Lands experience. The winning app's namesake is derived from Outside Lands’ mascot Ranger Dave, so when someone asks you how you ended up front row for a certain band, you'd say “Dave sent me.” The feature, built by Benji Xie, Donald Little, Justin Tu, and Teck Liew, was the runaway hit at the hackathon and had judges swooning over its crisp design and flawless functionality.

One of the prizes won by DSM was its integration into the Outside Lands app, meaning the group's work would be presented to the tens of thousands Outside Lands goers – a rare treat for an app right out of the gate. On the Outside Lands App, DSM is located the bottom of the main menu. The team had just three weeks to prepare.

Dave Sent Me’s user experience is incredibly simple. If you input bands who performed at the festival such as The Black Keys, Kendrick Lamar, Hot Chip, Sam Smith, and Caribou, Dave Sent Me recommends acts like Chet Faker, Toro Y Moi, G-Eazy, DJ Mustard, and Lindsey Stirling. If you select St. Vincent, Wilco, Mumford & Sons, Tame Impala, and Elton John, Dave Sent Me will send you to Django Django, The Drums, Laura Marling, First-Aid Kit, and Givers. With Dave Sent Me, festival-goers go from underbooked to every choice under the sun. 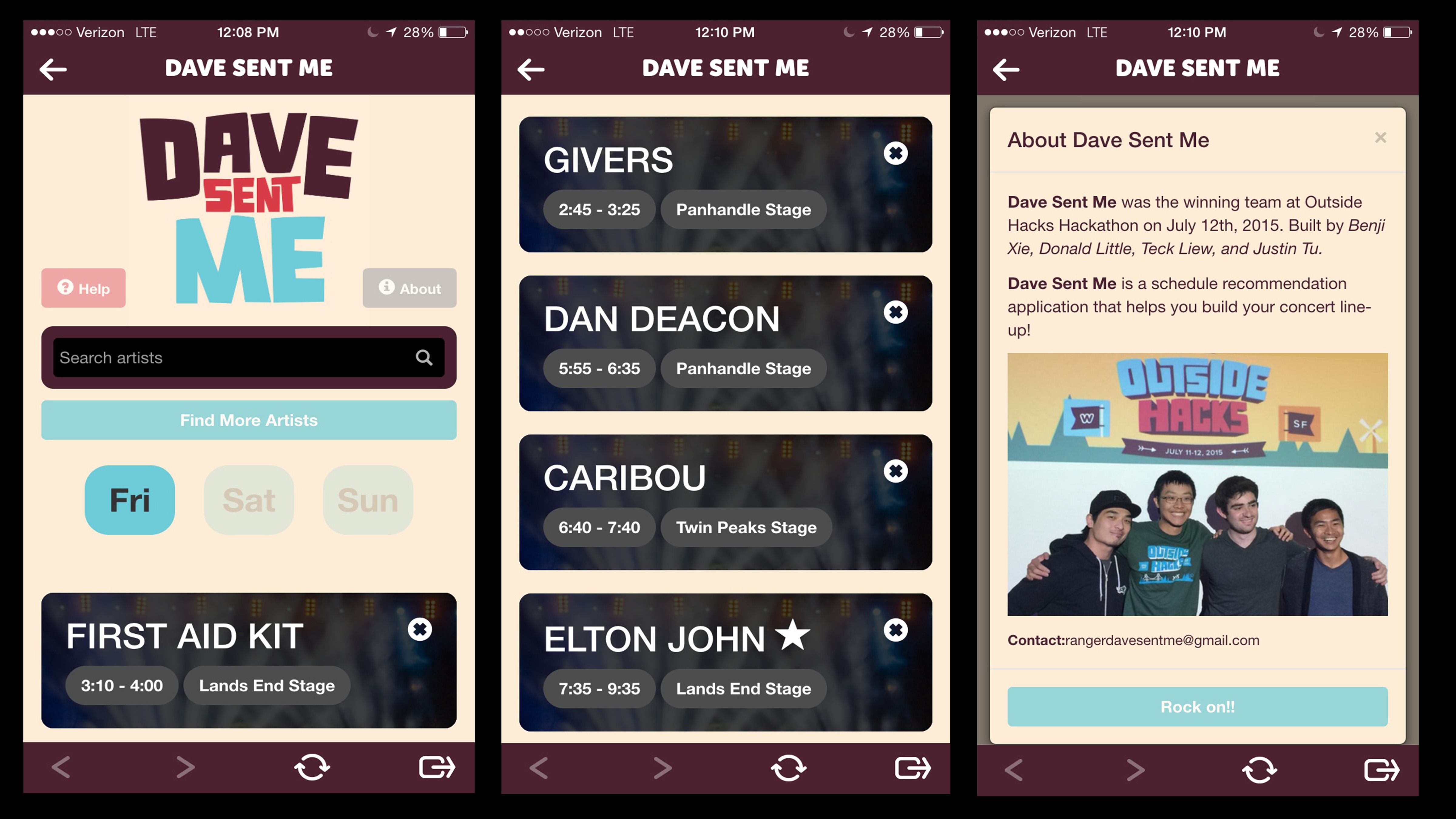 Photo by: Dave Sent Me App

“This solved a problem I had," said Xie. "This is my third time at Outside Lands, and there had been times where was I like I don’t know what to go see, so I just followed my friends.” Dave Sent Me’s is not for everyone and targets the non-music-junkie crowd. “We know this won't be much of a benefit to a hardcore festival goer, it's for a casual festival-goer who knows the headliners and wants someone to fill in the gaps,” Xie continued.

I caught up with Xie and Tu on the Saturday afternoon of the festival to hear about the progress of Dave Sent Me and the initial reactions. The two of them had made the rounds throughout the festival asking attendees if they used the app and what they thought of it. The response from users has been very positive; Xie summed the reactions from the users as “Why haven’t I seen this before?”

One of the more important insights gained from discussing the feature with users is that a lot Dave Sent Me’s value came right before the festival started when everyone tries to satisfy their impatience for the festival to start.

When the usage stats came in, the team were surprised to see the huge reach Dave Sent Me had. DSM had a total of 14,400 users with 1,600 schedules created. The data provided by the app also showed that users on average were selecting seven acts and Dave Sent Me recommended an average of six. The most selected artists were Elton John, Mumford & Sons, and The Black Keys, while the most recommended artists were Toro Y Moi, Cold War Kids, and Sky Ferreira, confirming the team’s hypothesis that users would opt for the bigger names when selecting acts. Friday was the most popular day for the app, due to the relative dearth of bigger names and abundance of indie acts. Xie used the feature himself—known as “dogfooding” in the tech world—and discovered indie pop outfit The Drums and reggae group Iration.

However, things did not go off without a hitch – there were some bugs. The most significant problem faced by the team was structuring Dave Sent Me to handle the massive user capacity. Early on the servers were overloaded which led to someone on Twitter saying he had problems using the feature. Little came to the rescue and fixed the issue up quickly. Xie says Little is “a rockstar” for that. In the future the team would like to see Dave Sent Me better integrated into the Outside Lands app; some users remarked to them that it was awkward having two schedule makers in the app.

From the hackathon to the festival, the experience proved to be invaluable for the team. All four members have been contacted by various tech companies to discuss opportunities. “You don't get this opportunity in a classroom or internship. The opportunity to build and make an app that's used right away used by tens of thousands of people is not something you get to do in a classroom or office.” says Xie. “It was aonce in a lifetime experience for all of us.”

Dave Sent Me’s basic but effective purpose is a pure manifestation of the Outside Hacks ethos. The feature enhances music lovers’ experience by providing more bands and acts to enjoy and obsess over, and more potential fans for an artists and bands. You could be seeing a version of Dave Sent Me at a festival near you very soon.