How to Avert a Stampede at Kumbh Mela 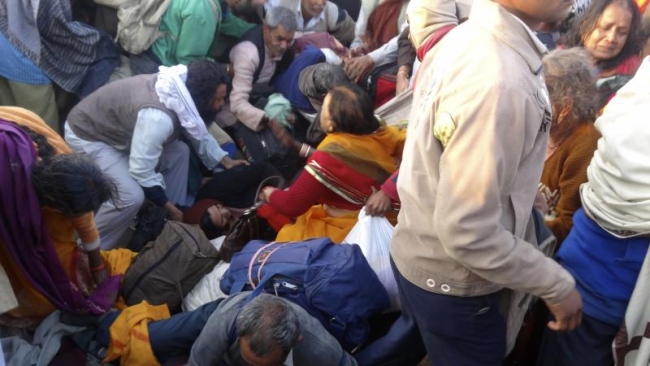 India is full of ironies. Allahabad, the closest city to the Hindu religion’s largest festival, used to be called Prayag but was renamed with an Islamic flavor. Indians, who are generally some of the most courteous people in the world, become all-elbows on the most auspicious religious day. And, 37 people who came to Kumbh Mela – aspiring toward spiritual liberation and immortality – tragically died in a stampede at the Allahabad train station the night of the biggest bathing day. 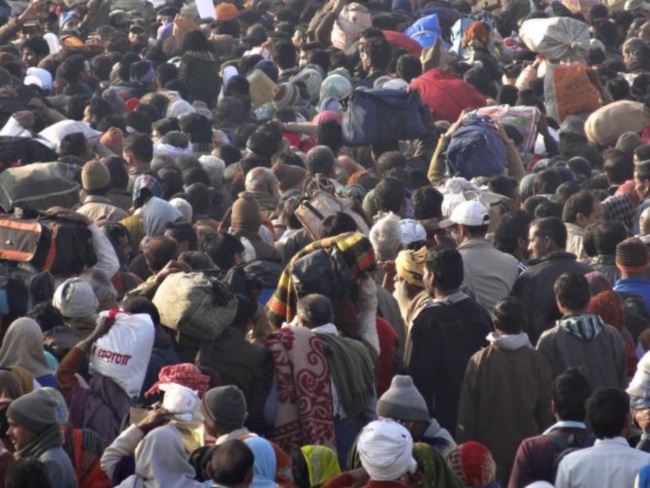 There’s a history of people being trampled at the mega-Mela with more than 1,000 people dying in stampedes in 1954. Fortunately, during three of the four days I was there, I found the crowds on the streets to be very tolerable and friendly. But, the size of the crowd probably doubled from 15 million people spread over 5,000 acres (one-sixth the size of San Francisco) to 30 million overnight when February 10th came along. And, the enormity of this mass of humanity, especially when there’s an exodus from the bathing areas or when, that evening, people are trying to leave the festival, can’t be underestimated. 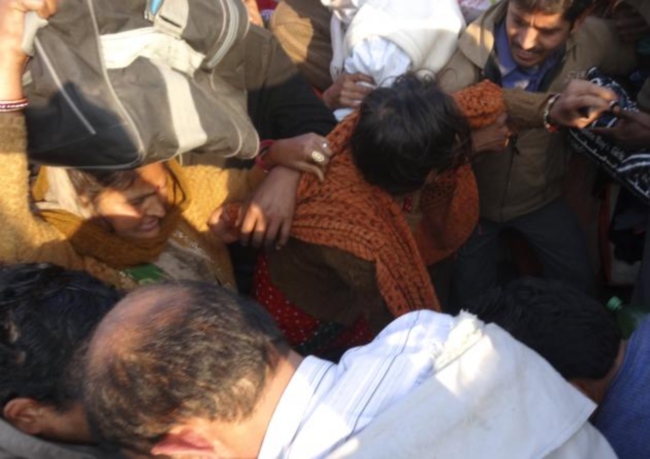 Trying to give someone on the ground some space

My first stampede experience happened midday at an intersection of two busy streets. I felt like I’d gotten caught in a river that was pushing me from behind, sort of like throwing yourself into the rapids. Given all the momentum behind you, if you push back on those hands and arms pressing you forward, you could end up face down. The first time this happened, I literally ducked under a stationery truck with a half-dozen others just to avert having my river raft hit a boulder ahead which is what was happening at this intersection. 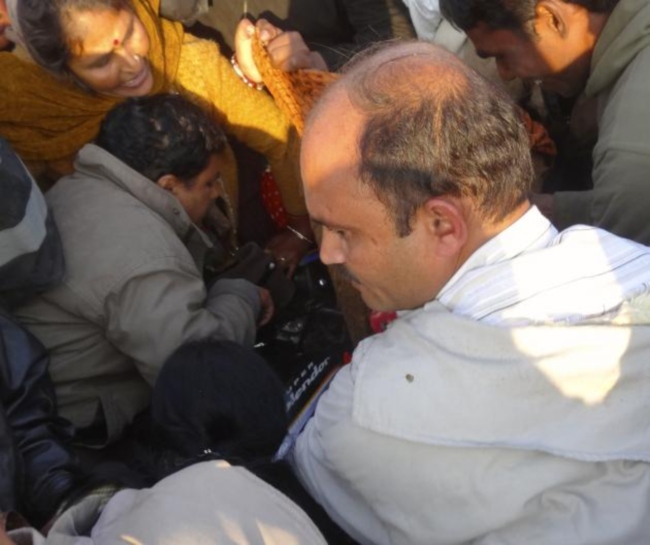 For my second stampede experience at the Mela, there was no nearby truck to duck under and I ended up staring at this guy in the photo below me for about an hour. He had a sweet disposition and, at just over 5 feet, it felt like he was going “underwater” on occasion so I would wave my arms to create some space for him to breathe. 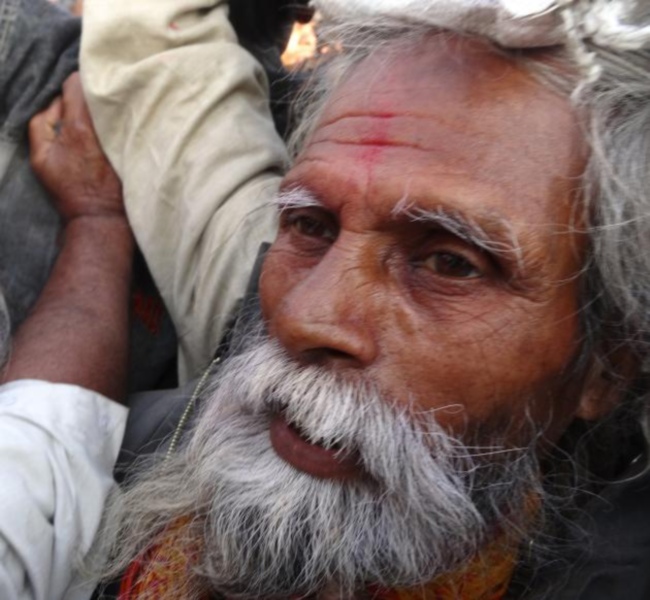 Faces not more than six inches away; you get to know your neighbors well when trying to stave-off a stampede

This second stampede is when I ended up sandwiched with someone below me and another on top of me, horizontal to the ground. If you see the opening photo for this post, you’ll notice that a few people fell right in front of me. I tried to hold back the crowd (while stupidly taking a picture) and the next thing I knew, a woman had fallen under me. I think we were four deep when, for a brief moment, the rapids receded and we were able to scramble up vertically again. More adrenaline rush than any ride I’ve ever been on. 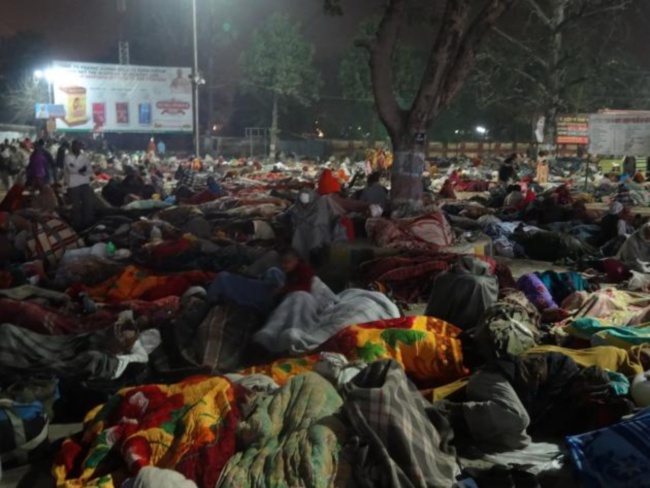 When we arrived at the train station, we could immediately determine there was an overcrowding problem

But, the serious stampede happened at the Allahabad train station around 7 pm the evening of the big bathe, as thousands of pilgrims rushed down stairs to a train platform with people falling and being crushed to death. Since we had an all-night train to Delhi that night, we arrived a few hours after this tragic pandemonium. When I first saw the scene depicted in the photo above, I thought all these people under blankets were dead but they were just part of the hundreds of thousands who crammed into a train station built for 10% of that size crowd. 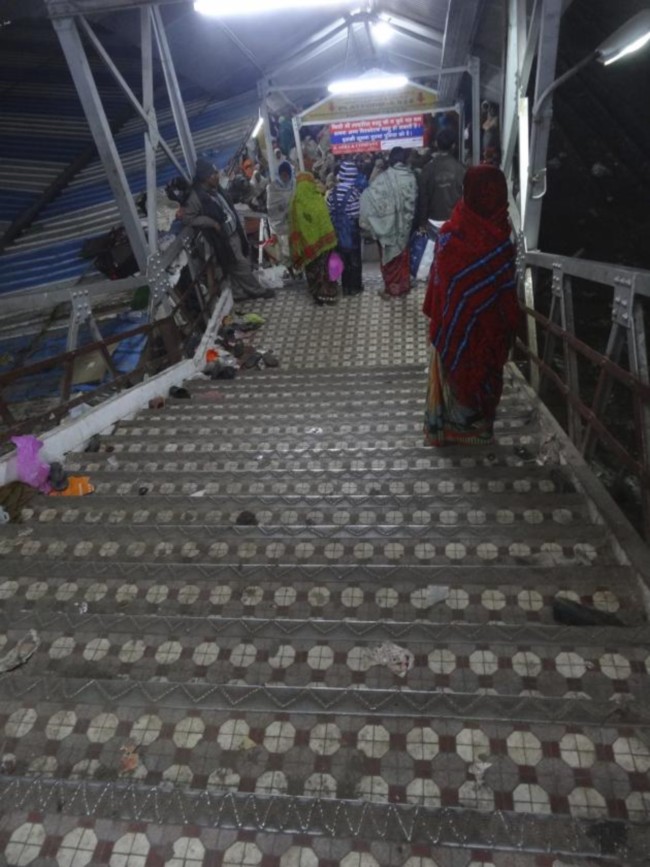 In my festival travels, I will go to the Calgary Stampede and to the Running of the Bulls in Pamplona, but those are planned. This harrowing event was not. Harvard University was so intrigued by Kumbh Mela that they sent six departments to study the festival this year: Arts & Sciences, the Divinity School, Graduate School of Design, the Business School, the Medical School, and the School of Public Health. Perhaps some of the world’s largest metropolitan police departments should send their top brass to witness the rights and wrongs of dealing with crowd control. Global megacities aren’t getting any smaller and stampedes may just be a phenomenon of modern life in certain parts of the world. 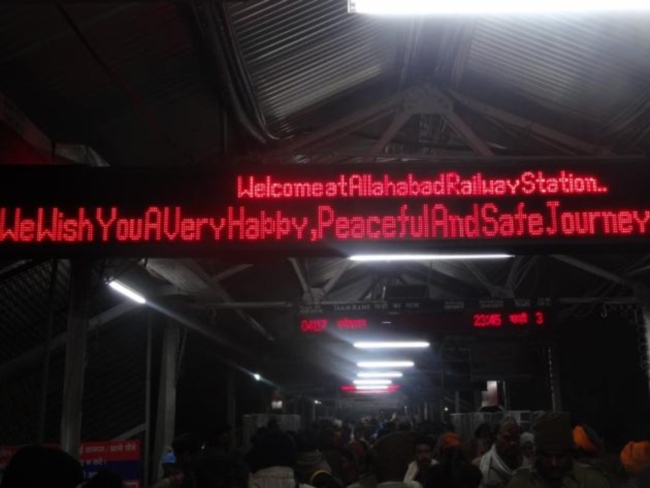 Suffice to say that my heart was heavy as I left the train station. And I was filled with gratitude for having survived this incredible experience.