Each spring as a child, I looked forward to the annual Derby Day party in our family backyard when my parents’ friends donned odd hats and downed mint julips. Somehow, I thought Il Palio was going to bring back childhood memories, but the Kentucky Derby is a back alley pony show compared to the tradition of Il Palio. The sheer volume of medieval pomp and circumstance is unparalleled on our modern planet.

The morning of the big ride (July 2 and August 16 each year), there’s a Jockey’s Mass led by the Archbishop. 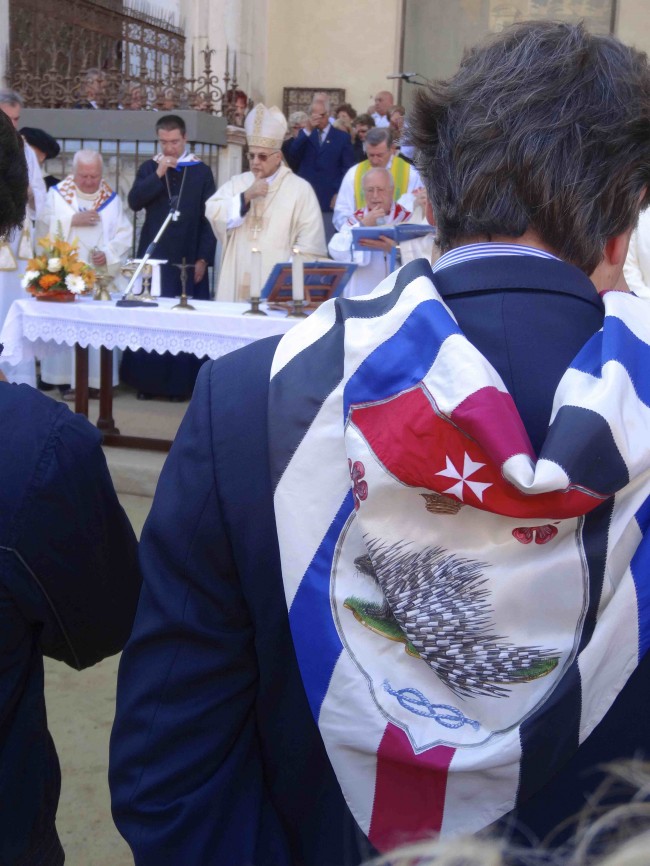 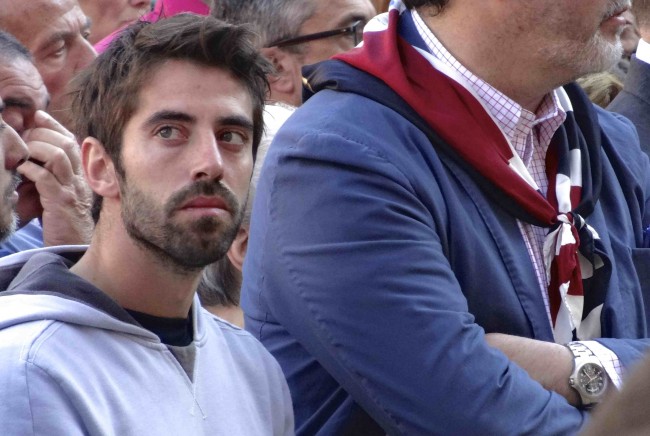 Later, the horses receive blessings in their respective district churches with the highlight being when a horse has a bowel movement in church during the ceremony. That’s supposedly good luck. I decided to miss this “lighten the load” ritual. All the loyalists from the district scream at the horse and jockey “Vai, e torna vincitore,” or “Go, and return victorious.”

I was able to score a seat in some stands at a critical corner of the racecourse. I’ll admit it. It’s a big commitment. You sit for 3-4 hours in the sun watching the medieval festivities and melting in the process. The stands are ridiculously crowded. And, you pay 180 Euros for this privilege. It was worth it for the vantage point I got but next time, I’ll just hang out with the masses in the center of the racecourse which is free (but does require you line up to get in 6-8 hours early) and the ingenious slanted design of the plaza gives everyone great sight lines. 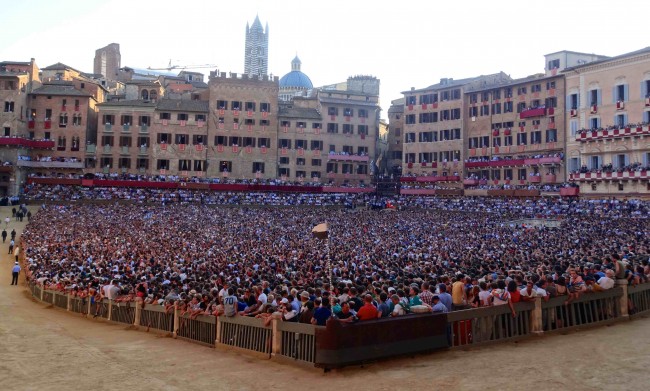 What a show it is! This is no county Renaissance Fair. 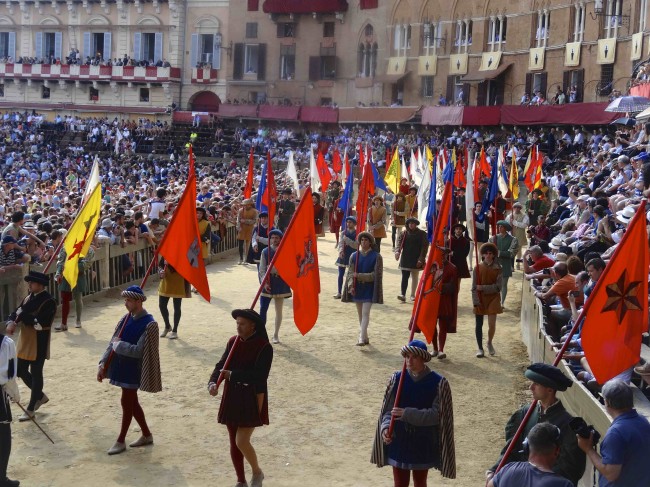 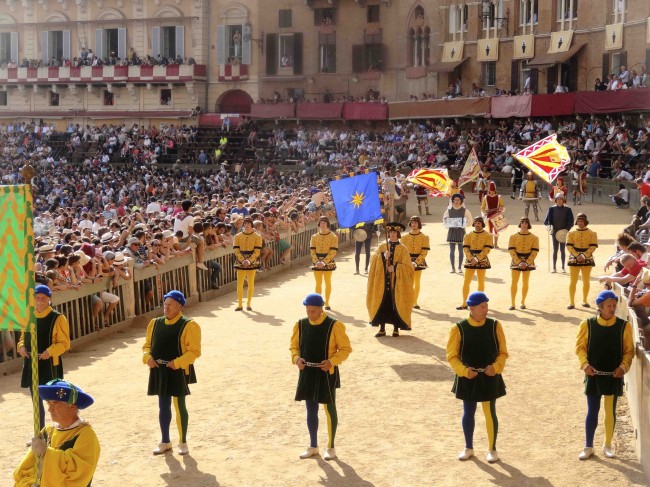 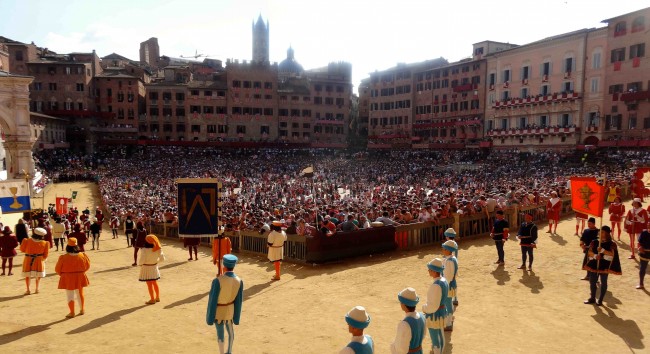 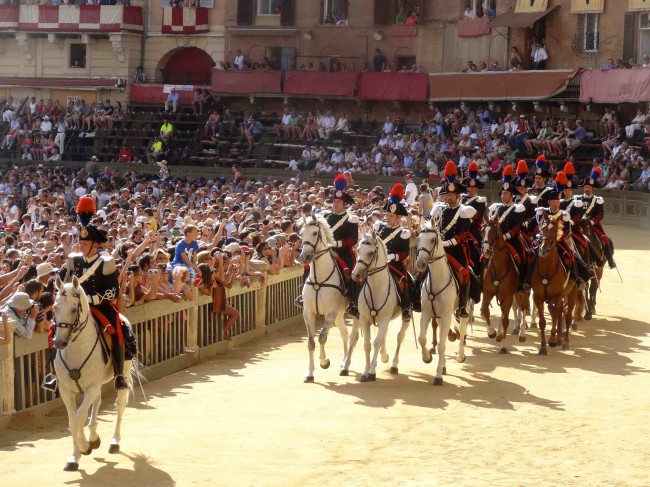 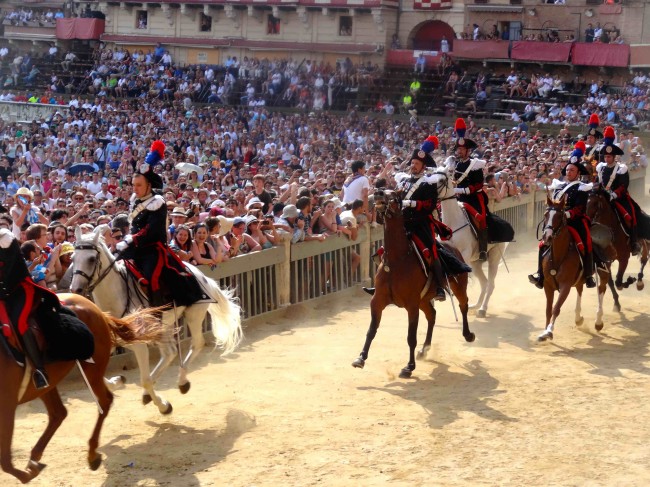 There’s a historic parade through each of the contrade (neighborhoods) with a show in front of the duomo. If you like flaggers, you’ll enjoy this spectacle. 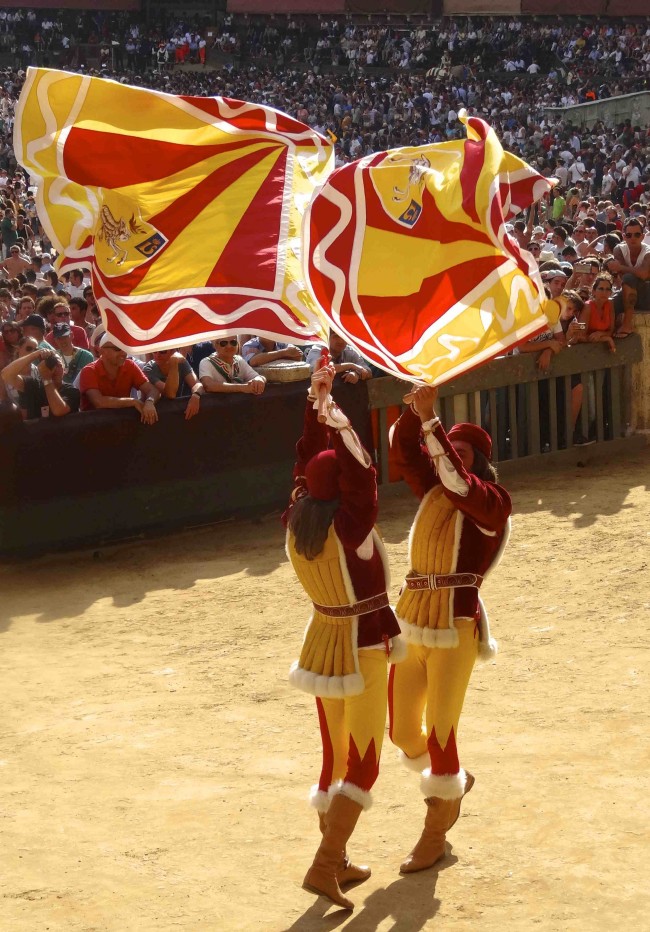 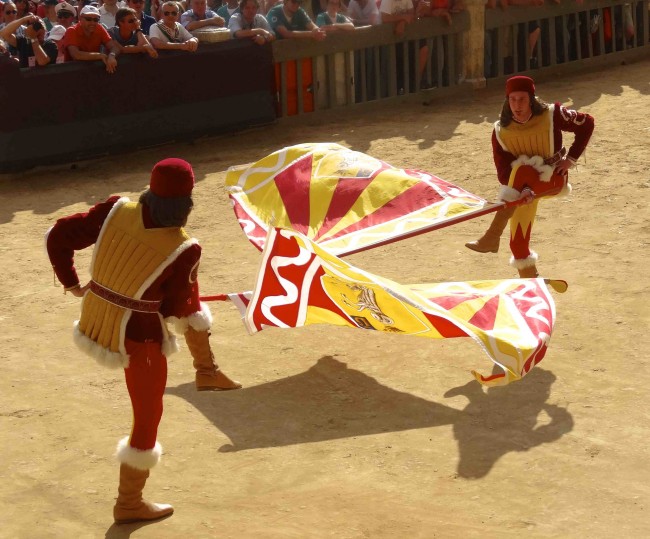 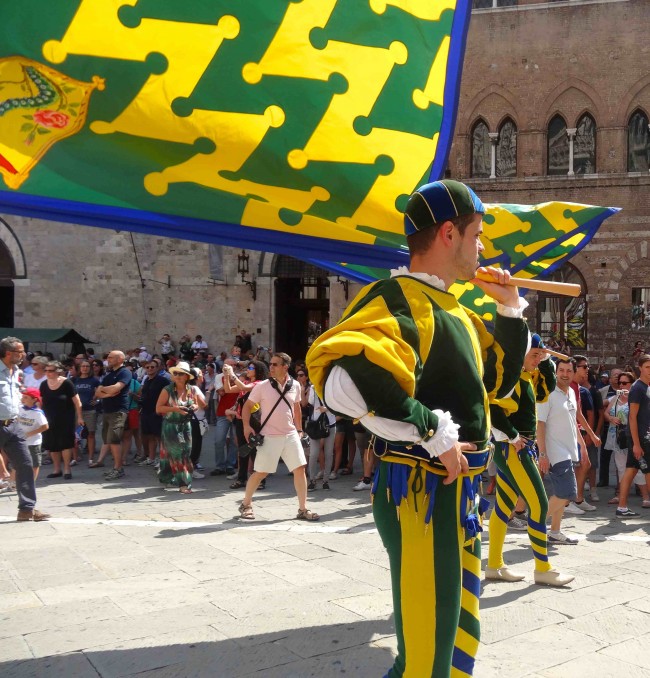 The pageantry is well-captured (although a little overexposed due to the sun being low in the sky) on the video with four white oxen, a magnificent war chariot, and buglers:

The only time I saw a horse spill was during this medieval parade when a horse reared up on its hind legs, threw its rider and ended up on the ground, fortunately unhurt. 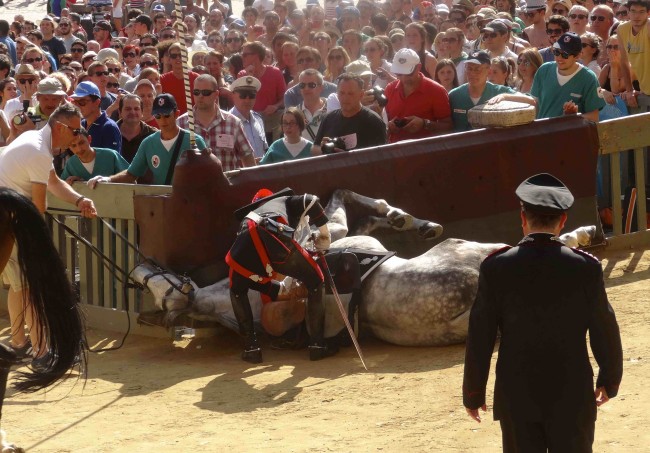 There are an estimated 70,000 people watching this spectacle and they’re wedged into every single extra crevice facing the piazza. 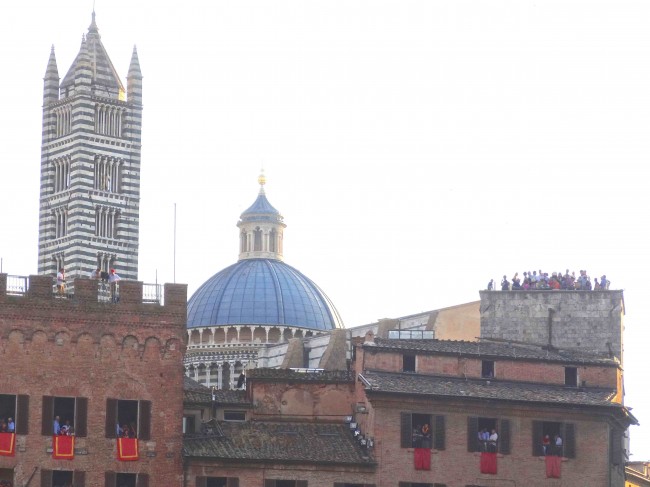 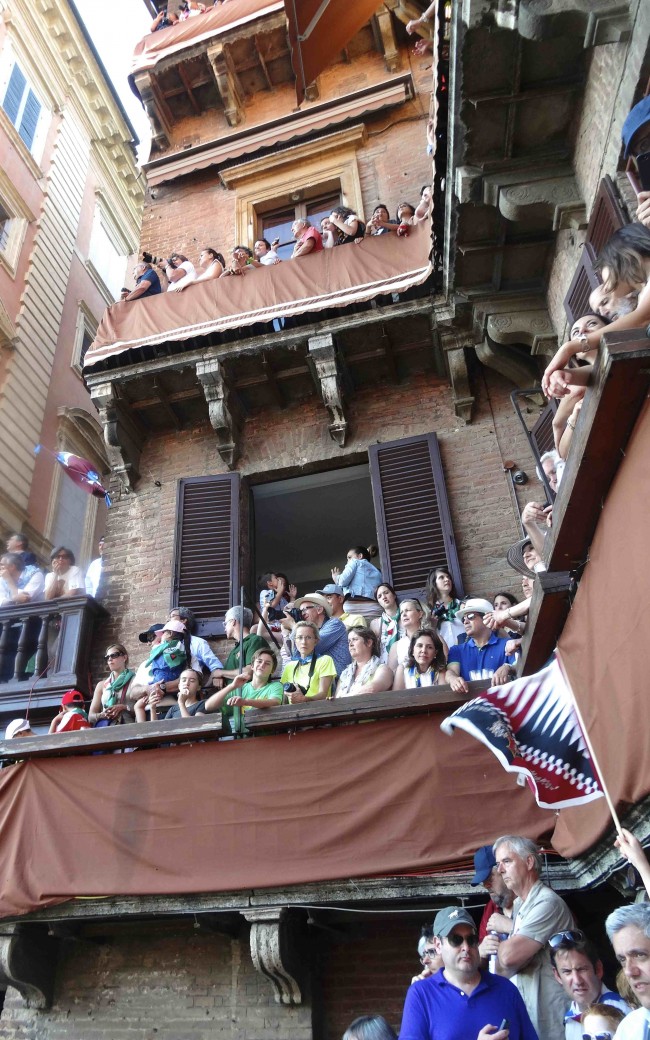 The tension runs high as each contrada whips up a frenzy. But, as it gets closer to the starting time, a complete hush overcomes the crowd. It is completely silent as the announcer belts out the poll positions for each horse. 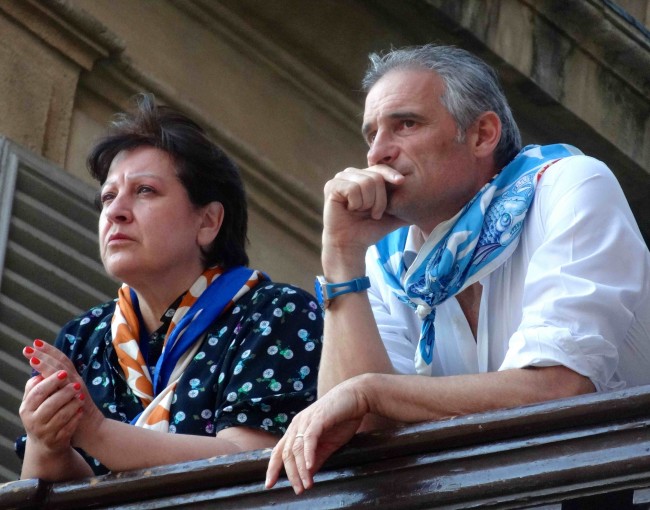 The pre-race tension is palpable 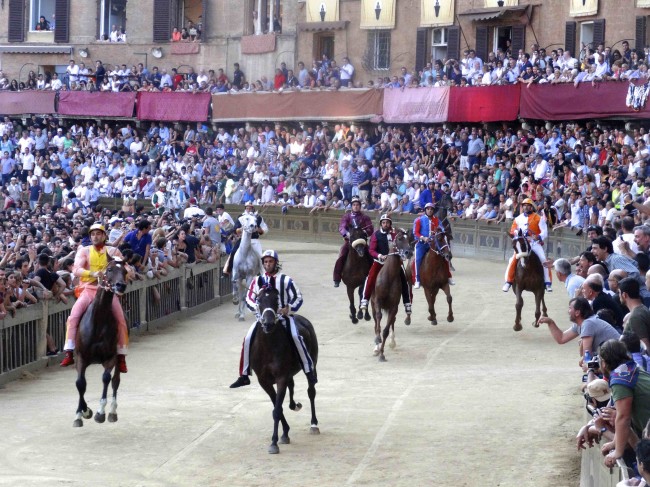 Finally, the race does begin. After days of parties, parades, and pandemonium, the whole affair will be done in ninety seconds with a wild gallop around the course three times. I was able to capture this on video including the celebration afterwards. Notice that a riderless horse came close to winning the contest (this happens quite often):

The winner was the Noble Contrade de la Oca, one of the favorites, and their jockey was hoisted on the shoulders of his neighbors and paraded around the piazza: 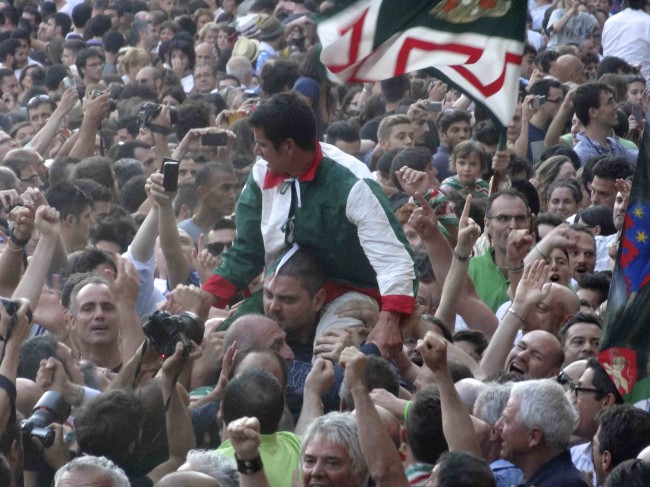 Based upon the footage I caught of this jockey being feted just 30 feet in front of me, I do have to say that my considerable investment in my bench seat, even with knees in my back and a drunken American swaying in front of me, was worth it. I stayed in the piazza lingering and just soaking in the collective effervescence. 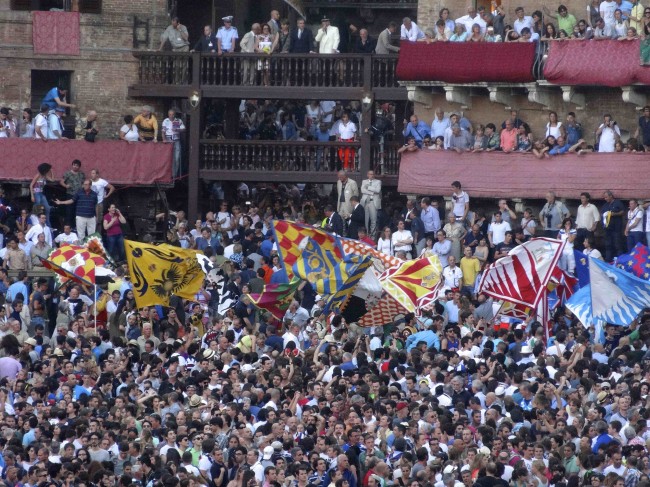