Shakespeare wrote, “All the world’s a stage,” but there are few stages as dramatic as Siena’s central square, the Piazza del Campo. Built between 1280 and 1350, its shell-shaped geometry with a perfect alchemy of corners, curves, and slopes keep light and shadows in constant motion. And, the Piazza del Campo’s tower and facing buildings create a drama that feels right out of an epic opera. But, instead of a fat lady coming out and singing an aria, we get to marvel at man and animal in rapid pursuit of glory. Most amazingly, my bedroom was less than 100 steps from the racetrack which allowed me to do a run there one morning: 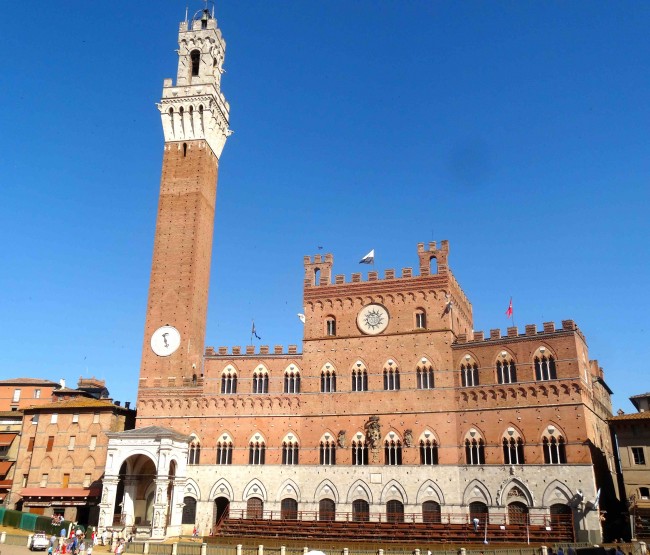 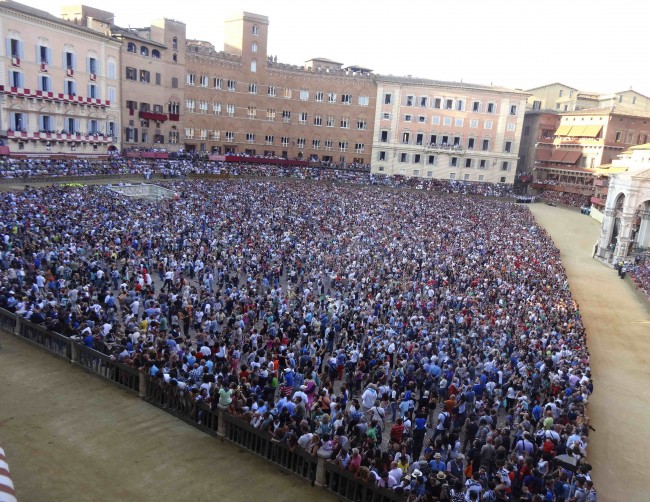 This event is so important that the only time in hundreds of years it’s been cancelled has been due to war or natural disaster. During the Renaissance, it became the main annual expression of rivalry between the various ancient districts of Siena, the contrade, and it led to many deaths and injuries. Today, it’s a little more tame, but as evidenced in my last post, it’s still a very spirited and blood-thirsty event for locals. Ironically, the Virgin Mary is the heroine of this aggressive event, as the races were consecrated to atone for a soldier who fired in rage at her image and the prize that goes to the winner, a showy banner, includes her effigy. 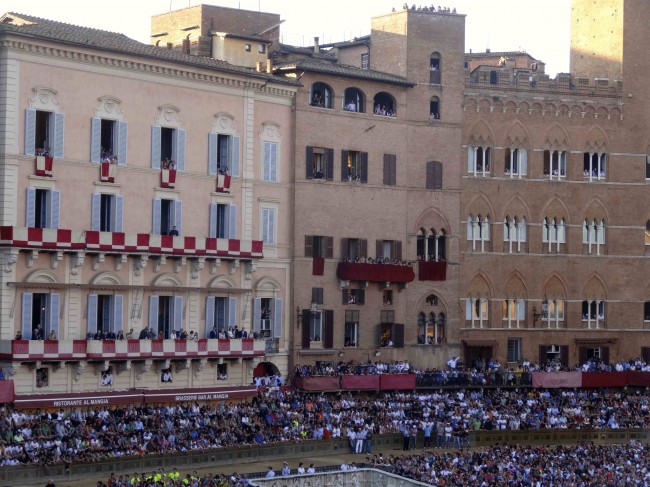 There’s a fabulous medieval pageantry on this stage: the contradi flags, the armored horsemen, pages, drummers, buglers and war chariots carrying the Palio, the victor’s banner, drawn by two white bulls. It feels like an epic Merchant Ivory film and I almost expected Sophia Loren or Gina Lollobrigida to pop-up at any moment. And, then, of course, there is the procession of the horses with their colorfully-attired jockeys. 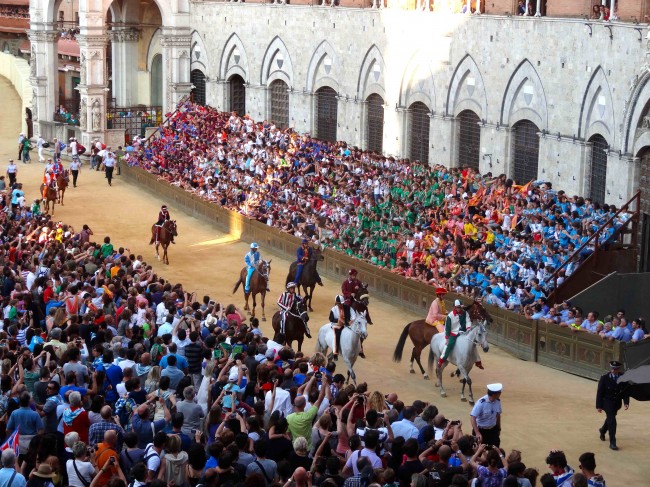 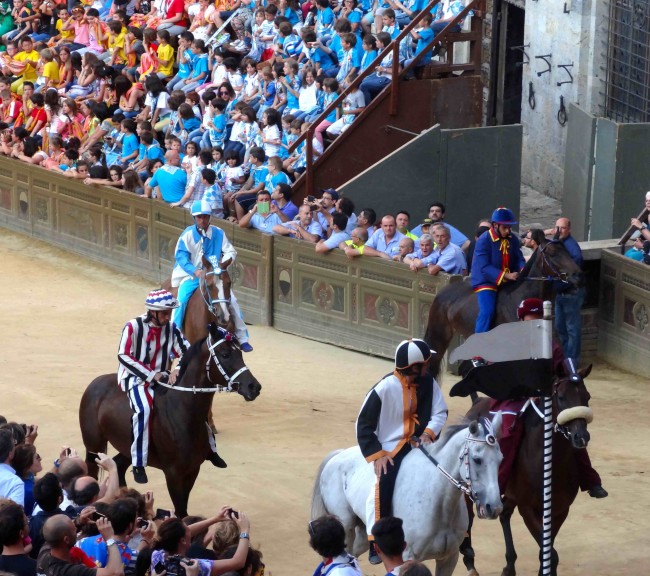 I was fortunate enough to get a standing spot in the center, right next to the starting line, for the morning trial race on July 1 so I was able to get some good photos of the stars of this medieval parade. 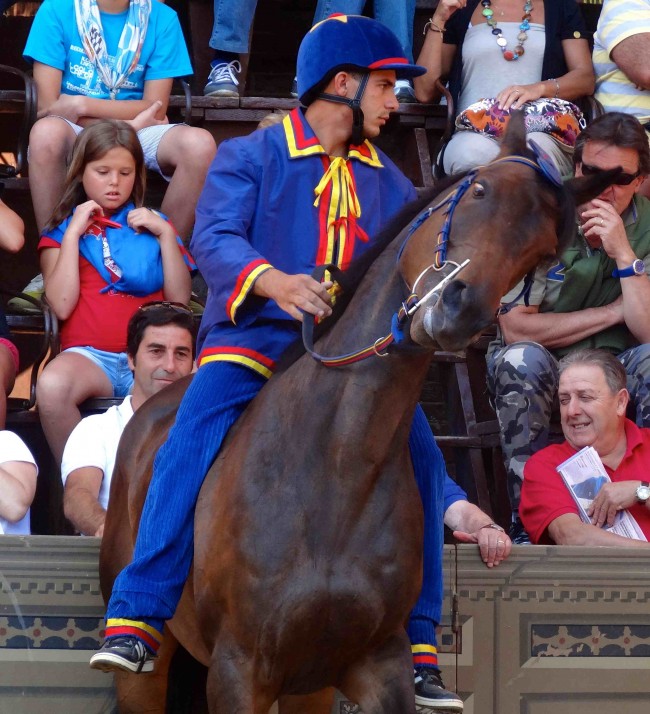 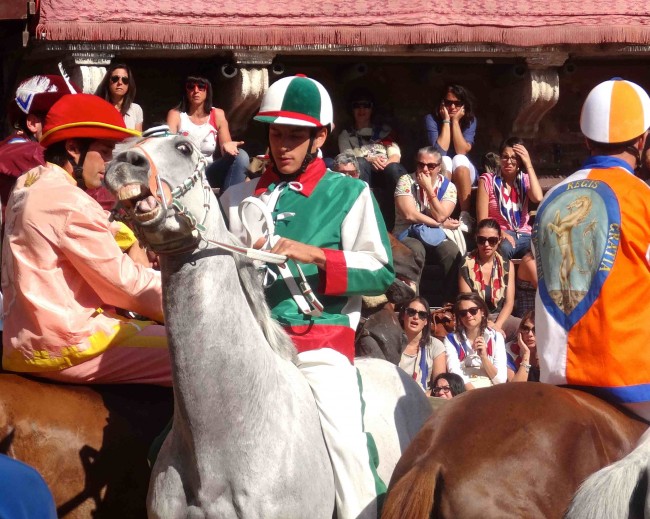 It took more than twenty minutes to get all ten horses to the starting line at the same time and this was only one of a few trial runs, as some of the jockeys started getting impatient with the more independent-minded horses that weren’t ready to race. 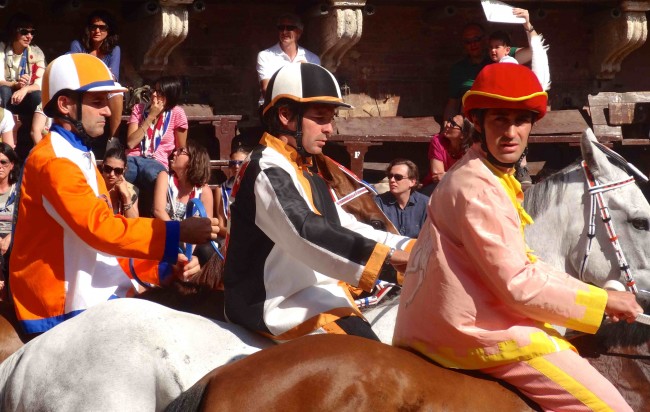 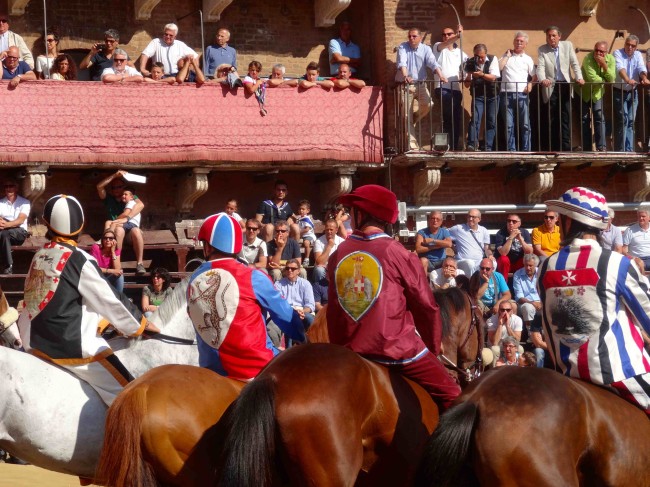 The race gets started with a very loud cannon firing and that’s also the noise that puts an end to the trial runs. 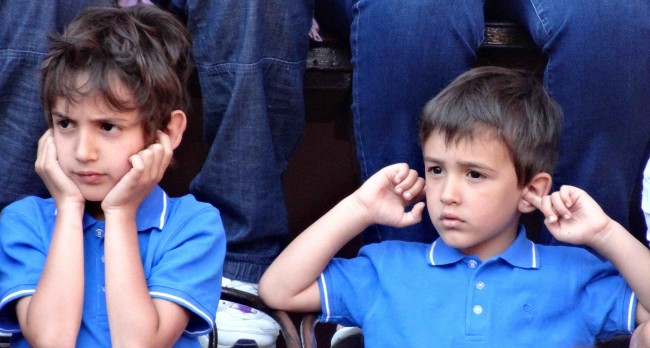 Preparing for the loud cannon 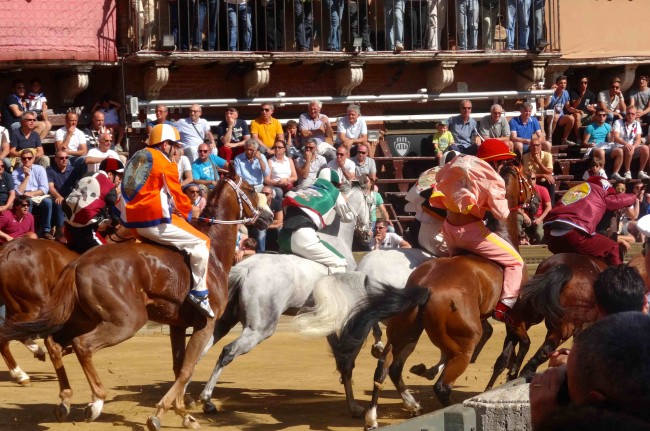 Trial races and party places. No one gets anything done in Siena pre-race as everyone is in the streets. 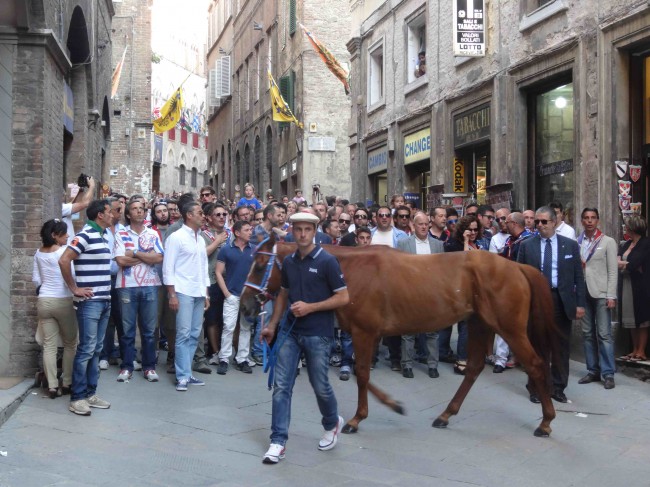 The night before the race, each of the ten contending contrada have an elaborate street party (60 Euros a person for a six-course meal) to celebrate their jockey and to create a victorious spirit for the next day. I went to the Contrada Priora de la Civetta and was probably one of only a dozen folks who weren’t from this particular neighborhood so it was quite a cultural experience. 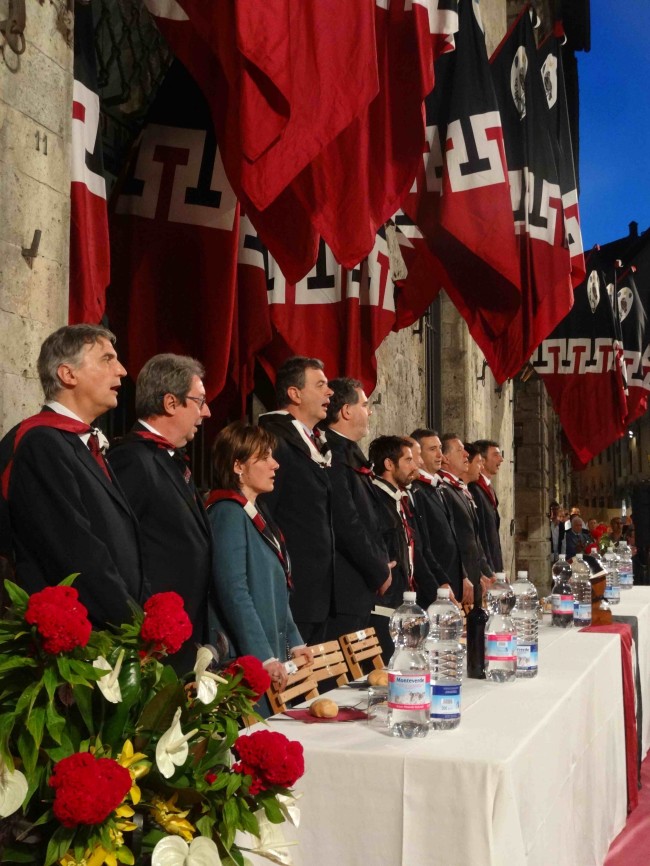 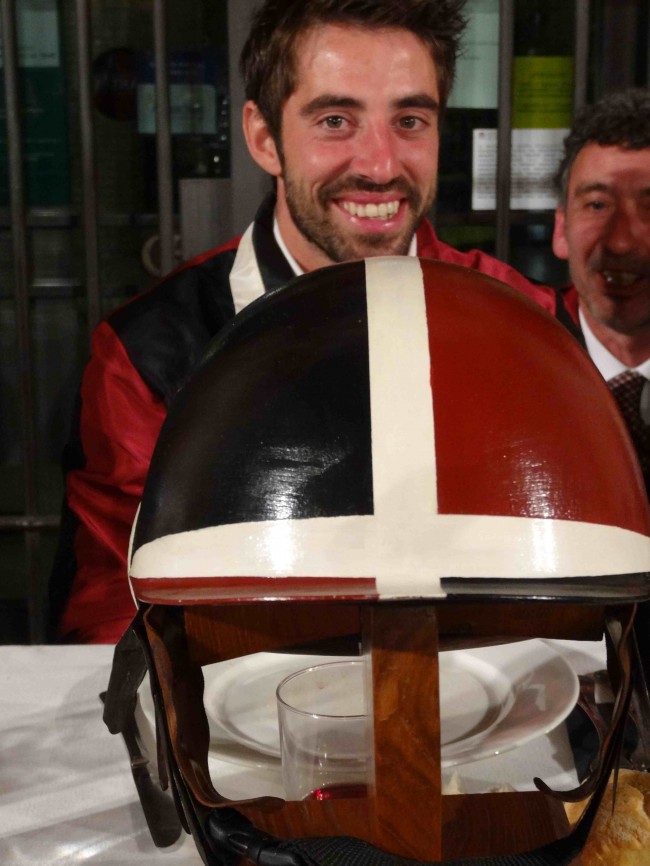 The jockey at the head of the table 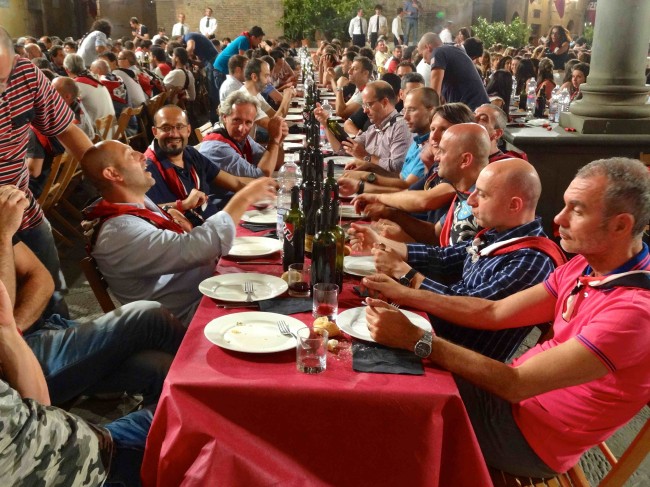 I felt like I’d joined a drunken Italian wedding or was at some college fraternity reunion. For some of you, that might sound awful, but the cultural anthropologist in me was fascinated by the multi-generational nature of this event and how this tradition has been passed on for centuries. 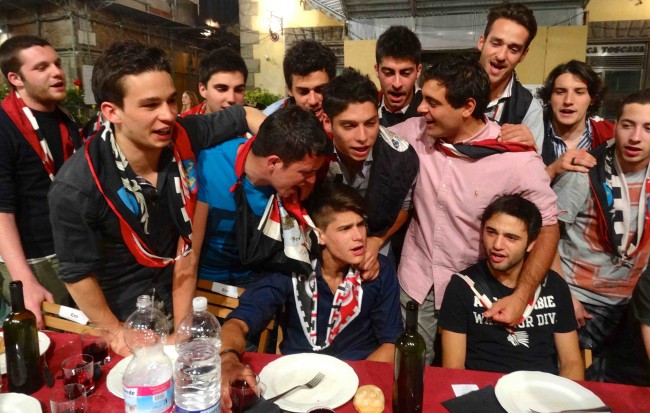 Yes, even the kids learn their Italian hand gestures at an early age. That’s a generational gift or curse that keeps on giving. 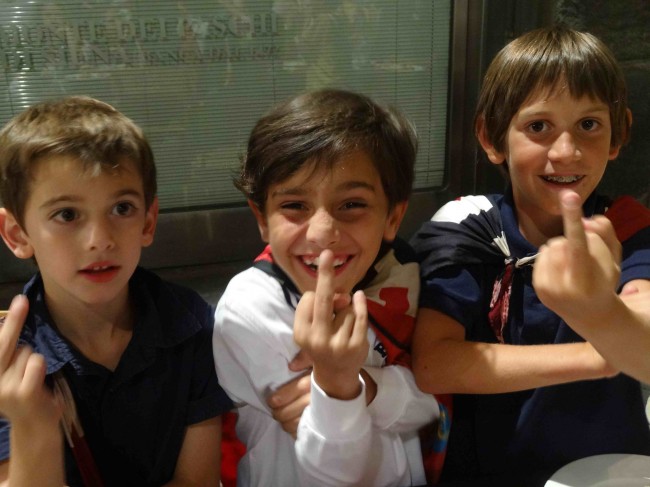 The language of love was rampant this evening. 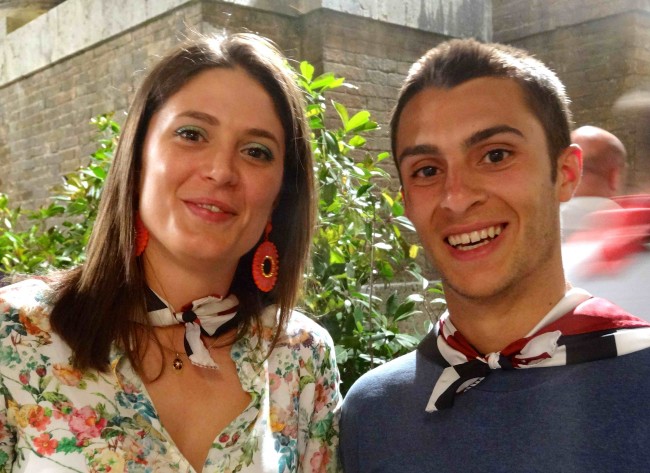 But, what was missing was the food. By 11 pm, I’d only had two of the six courses of the dinner and I knew I needed to be at the early morning Jockey’s Mass so I bid arrivederci to my table and sauntered back into the living museum that is Siena. 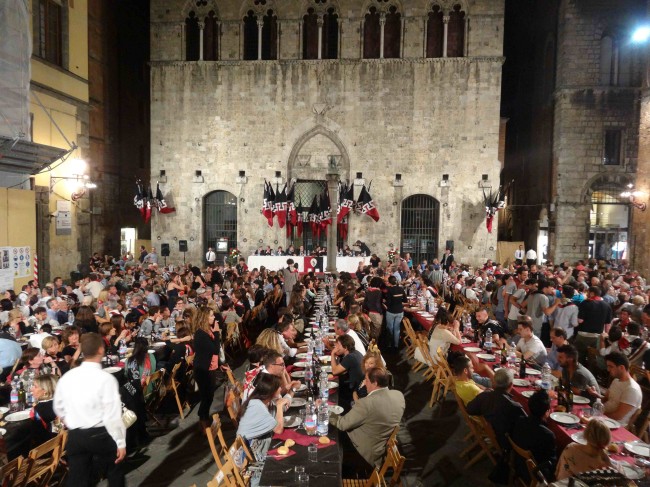 Siena has been a wonderful reminder that “la dolce vita” is alive and well in Italy even amidst a stunting economic downtown that has plagued the country and region.