Many factors must collide for an incredible music festival experience: The music, the landscape, the theme, the cost, and who you're partying with all play significant parts. But sometimes the size of the festival can dictate exactly what kind of weekend you have. This is a look at the advantages of both small (10,000 or fewer) and large festivals (25,000 or more), and poses the life-long question: Does size really matter? 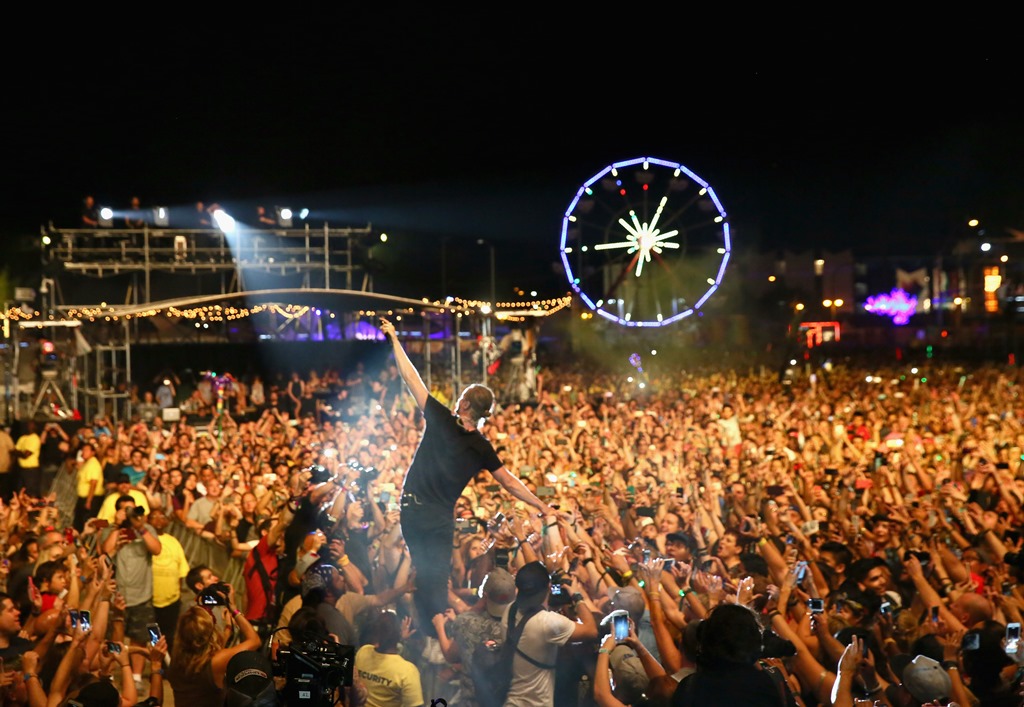 You Can Truly Lose Yourself

Front row at the massive Tomorrowland. Photo by: Eden Shohat

Large festivals lend themselves nicely to letting loose; you're in a sea of people in full-on "express yourself" mode, and we often go to them with big groups of friends, which can become a comfort zone. If you need to get away, you can – all you have to do is break away on a solo adventure. In a large-scale environment where thousands of people have gathered, the chances of bumping into someone you know aren't easy, even when it's pre-arranged. On solo adventures, you can express yourself as a true individual and not have to always stick with your tribe's vibe.

There’s So Much More To Explore

The sprawling festival grounds of Rock in Rio. Photo by: IHateFlash

A large festival can be the size of a city, so you definitely get more bang for your buck. At every turn, there are new things to see: wandering theatrical performances, large-scale art installations, live art, specialized stages, themed food areas, and hidden areas to explore. No matter what you're into, you’re bound to find something you love.

A Greater Variety of Artists and Musicians

Elton John performing at Outside Lands. Photo by: Justin Yee

With a bigger budget to play with, you're treated to more musical choices – not to mention the fact that big festivals can afford those "once in a lifetime" headline acts like Elton John at Outside Lands or Stevie Wonder at Life Is Beautiful . 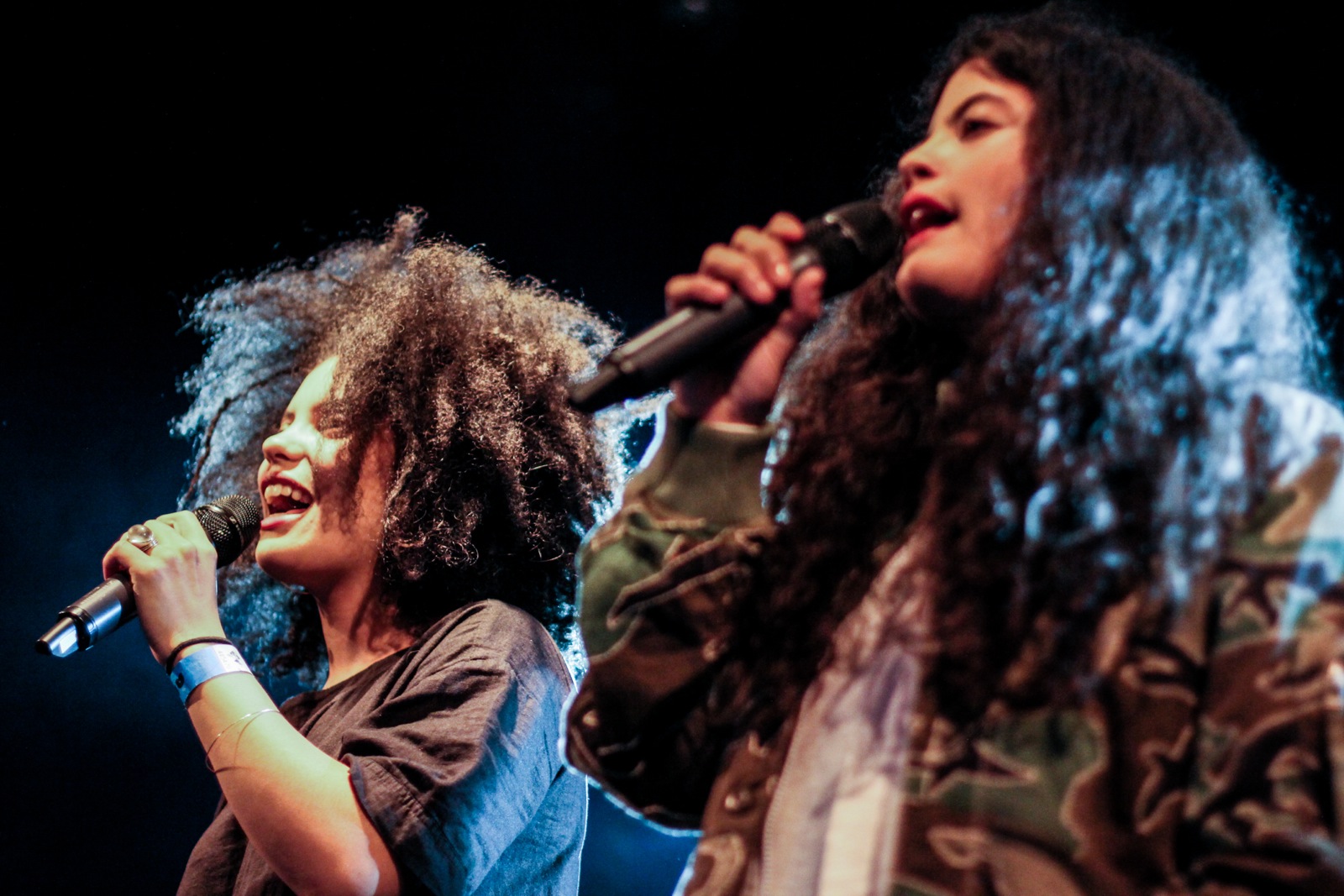 With more variety on offer, you're much more likely to discover something you didn't even know you liked. For me, I discovered The Flaming Lips and Death in Vegas after getting lost for a few hours at Glastonbury fifteen years ago, two bands that remain in my top twenty today. How cool is that?

Although smaller events do put a lot of effort into providing great stage design and production (check out Noisily from the UK), larger fests have more space to work with, and can often afford stunning pyrotechnics, 3D projections, water projections, and even pirate ship stages. In the UK, teams like Arcadia travel the large festival circuit and produce some of the most jaw-dropping pyrotechnic shows that are perfectly synced with the music.

A large hangout area at Bonnaroo. Photo by: Marco Sanchez

The capacity at larger festivals means thousands of potential new friends and dance partners. Never looked at it that way? Check out contributor Mia Quagliarello's exploration of why it’s so much easier to make friends at festivals.

Getting intimate in the forest at Pickathon. Photo by: jason redmond 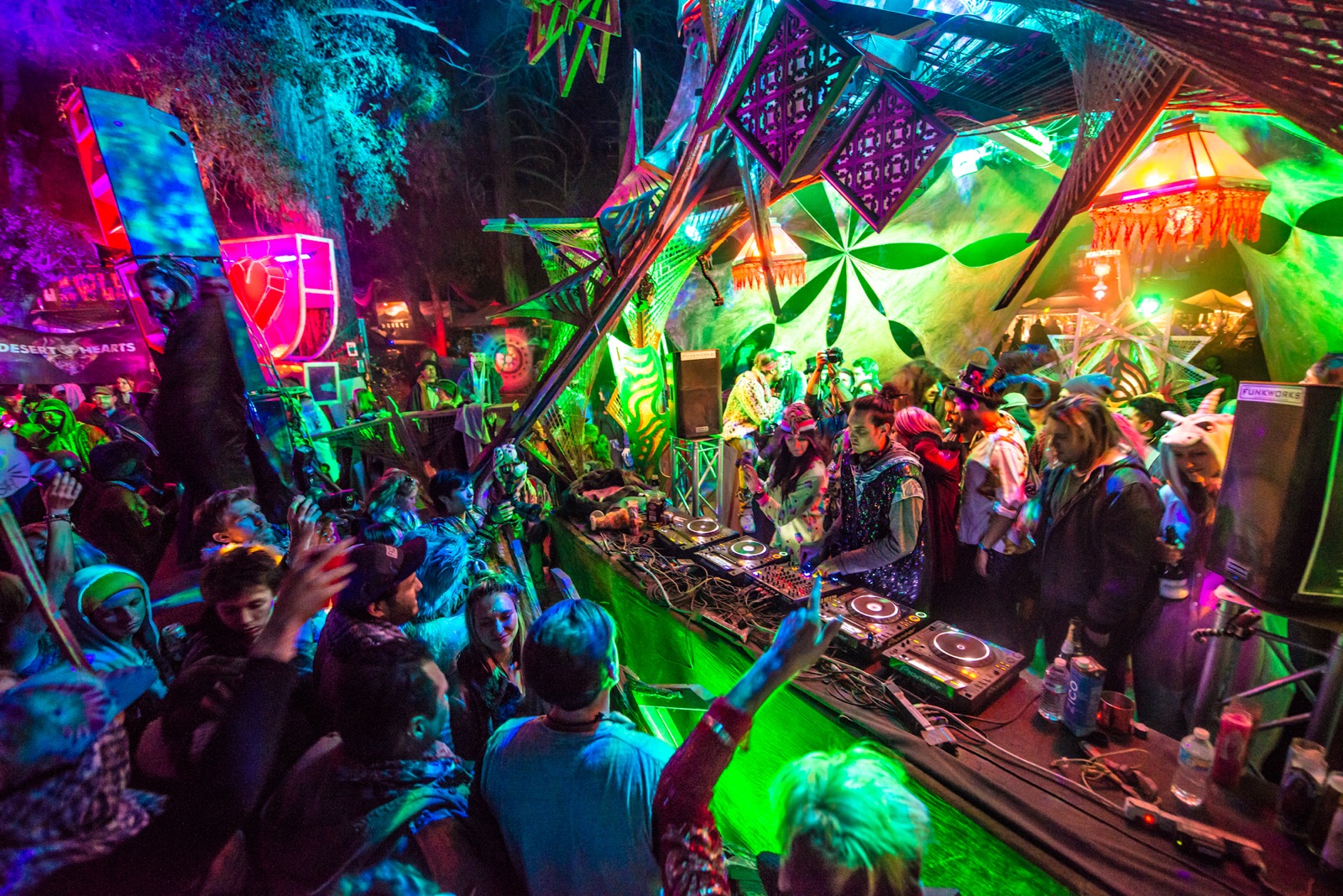 The single, intimate stage at Desert Hearts. Photo by: Juliana Bernstein for Get Tiny Photography

Smaller events don’t have the same scale of goings-on that larger events have, which is usually reflected in ticket prices. Luckily, that's what makes them so wonderfully intimate. As well, when you pay less for a festival, you have more of a budget to eat well, enjoy drinks, and purchase bespoke items from traveling, independent artists.

It's Harder To Get Lost From Your Group 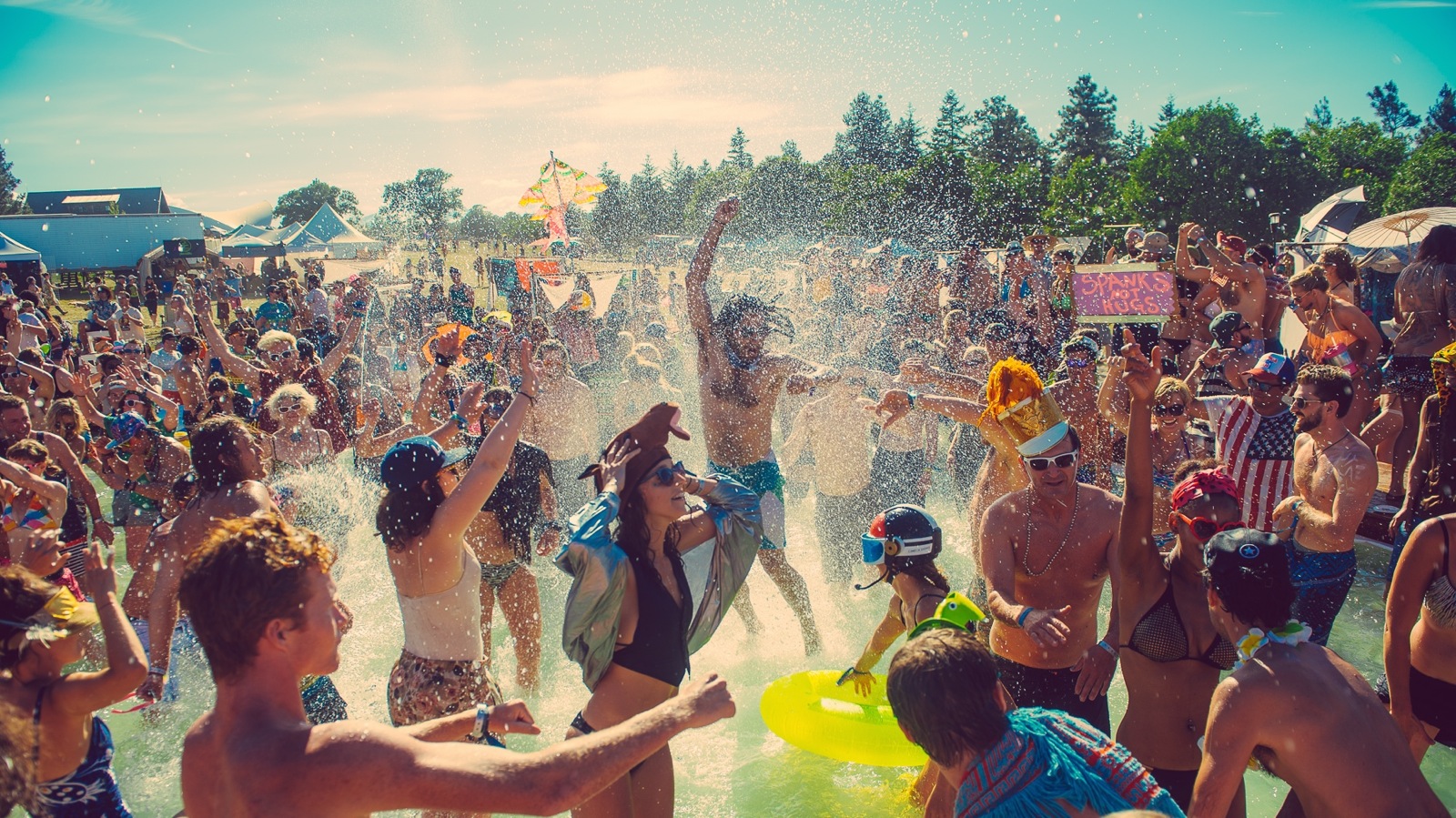 The communal splash pool at What The Festival. Photo by: Daniel Zetterstrom

If you don’t love being separated from your friends at a fest (understandable!), there's a lot less of a chance you'll be split from your group at a smaller shindig – and if you are, cell reception is often good enough that you can find them again. When you stick together as a group at a festival, you eat, sleep and party together. You look after each other and build on your existing friendships.

Because smaller festivals aren't trying to attract tens of thousands of people, they have the unique opportunity to specialize in one musical genre or festival theme (think the summer camp vibes of the Dirtybird Campout, or the wellness focus of BaliSpirit Festival). This allows you to totally immerse yourself in your niche, be it reggae, psytrance, or even healthy living. As the popularity of festivals grows across the globe, so does the range of smaller, specialized festivals.

A chill spot at Arise Festival. Photo by: Juliana Bernstein

Smaller festivals are the perfect backdrops for first-time festival-goers – they are less hectic and easier to navigate and feel situated in. You're more likely to see familiar faces, and, because it's not such a vast ocean of people, you have the chance to build stronger, more lasting bonds with your fellow festies. 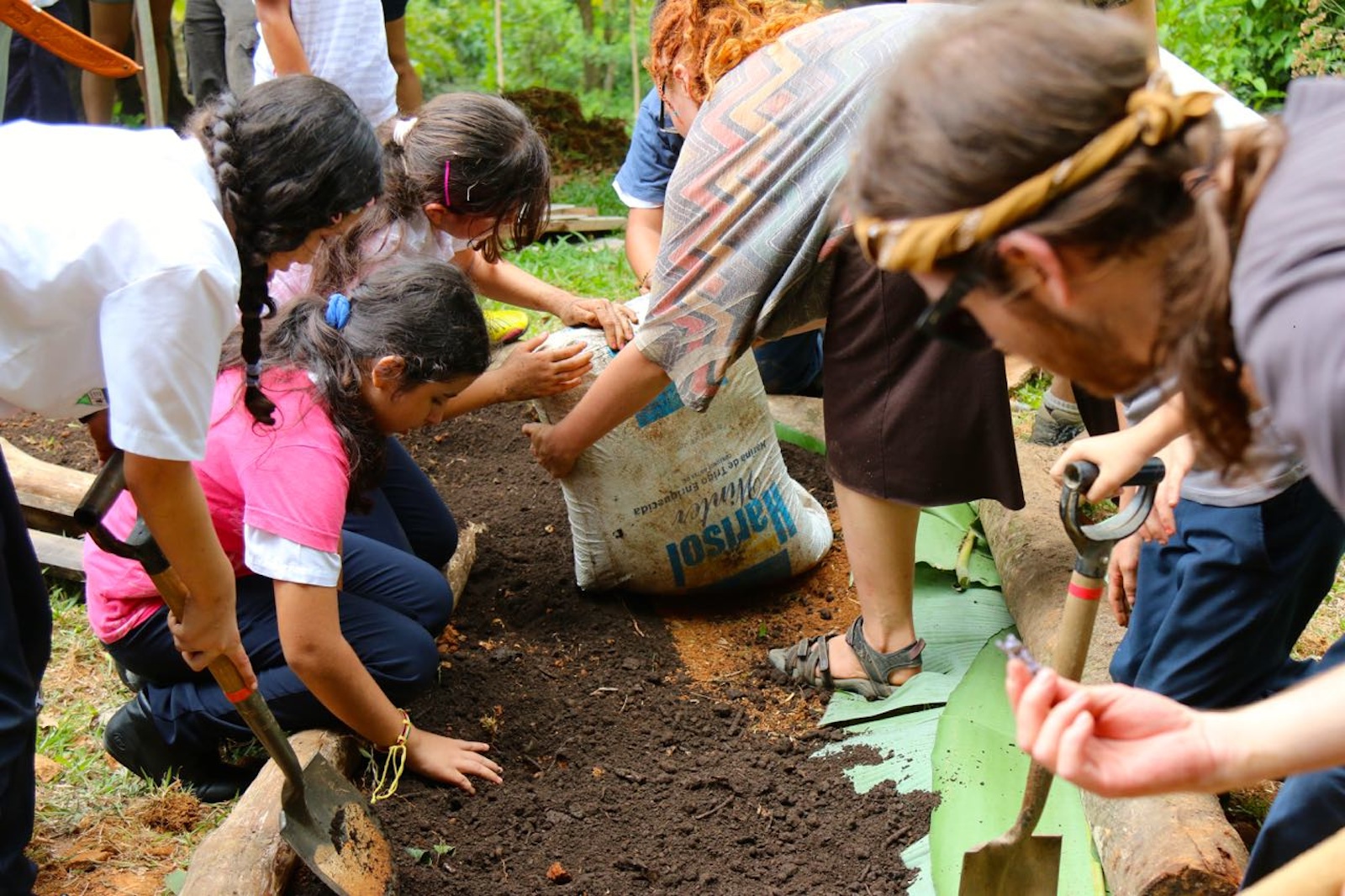 There is no doubt that putting on a festival has a huge impact on the land. At biggies like Glastonbury, Coachella, Electric Daisy Carnival, and Bonnaroo, tons and tons of trash is created by festies, vendors, and artists alike. There's also mass energy consumption involved to keep everything running, and the carbon footprint of thousands of people traveling to the festival venue. By their very nature, smaller festivals have a lower carbon footprint. This makes them a lot more sustainable and helps ensure that our grand kids can dance on the same beautiful backdrops we are so lucky to enjoy.