Vendors
Photo By: Lights All Night

Ring in the New Year with Lights All Night's 2017 Lineup

Remember the time before festivals took over New Year's weekend and filled it with massive drops and fiery pyrotechnics? Yeah, we don't either. Lights All Night is one such festival occurring during this pivotal weekend in Dallas, Texas, and it just dropped its full and amazing lineup for December 29-30, 2017.

Topping the bill are Marshmello and NGHTMRE as headliners, as well as Liquid Stranger, Morgan Page, Maxo Kream, EDM heavyweights Bassnectar and Porter Robinson, as well as notable acts like Illenium, Seven Lions, Ookay, AC Slater, Destructo, Drezo, and TOKiMONSTA, as well as up-and-coming rappers in Ugly God and Smokepurpp. Take a look at the full roster below. 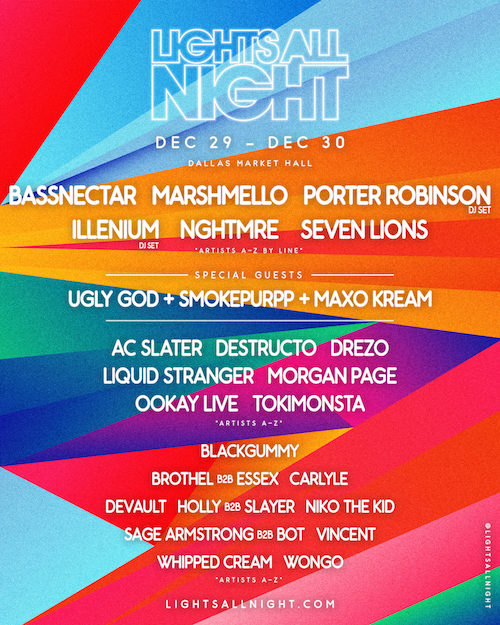 Photo by: Lights All Night

For the past eight years, Lights All Night has made an epic party out of celebrating the end of each year and welcoming the next with huge names in EDM and hip-hop. The two-day music festival has built a legacy and legions of dedicated fans, who turned out in droves when Lights All Night announced a specially-priced "Houston Relief Pass," of which a portion of proceeds from each ticket sold would be matched and then go on to support Hurricane Harvey relief efforts led by the Houston Food Bank. Today, the festival has revealed that it raised and donated just over $22,000 from that charitable initiative. Nothing like a little positive festival news to kick off the upcoming winter season!