Meet the Families Who Fest at Lightning In a Bottle

In the short span of their recent resurgence, festivals have been commonly and begrudgingly scribbled onto the list of sacrifices new parents have had to make. But is that necessary? Possibly ten years ago, when family-friendly festivals were few. Back then, readers of The Guardian may have stumbled upon an article that read, “taking young children to festivals is the cruel and selfish indulgence of parents not willing to make sacrifices.” Harsh, mate. Luckily, this draconian opinion has become outdated; the drive in festival popularity has paved the way for increasing numbers of successful family-friendly fests.

While not all fests are safe for families, gatherings as large as Bonnaroo and Lollapalooza have ranked high on family and parenting blogs, while smaller – but no less amazing – gatherings like Symbiosis and Joshua Tree Music Festival are also gaining similar reputations. One of the larger and newer fests boasting a family atmosphere is Lightning in a Bottle .

Lightning in a Bottle (LiB) glues together a multi-dimensional lineup of music, art, performance, yoga and workshops in addition to a dedicated kids’ zone, to take the shape of a perfect four-day family gathering (five days for those with Early Arrival passes). However, LiB is still widely recognized throughout California as a transformational festival, carrying the potential of certain situations that often drive conservative parents in the opposite direction.

As May ushered in Memorial Day Weekend, we grew ever more curious to find out if LiB is as safe and beneficial of an experience for the whole clan as the program boasts. So we took the dive into California’s crown jewel transformational fest to hear what the families themselves had to say at Lightning in a Bottle. When the first discovery upon entering the festival was a group of millennials singing Happy Birthday to a pair of twin cuties in tu-tus holding parasols, we already had an idea of how the weekend would go.

One family was ambitious enough to make Lightning in a Bottle not only their first festival together, but also their debut camping experience. 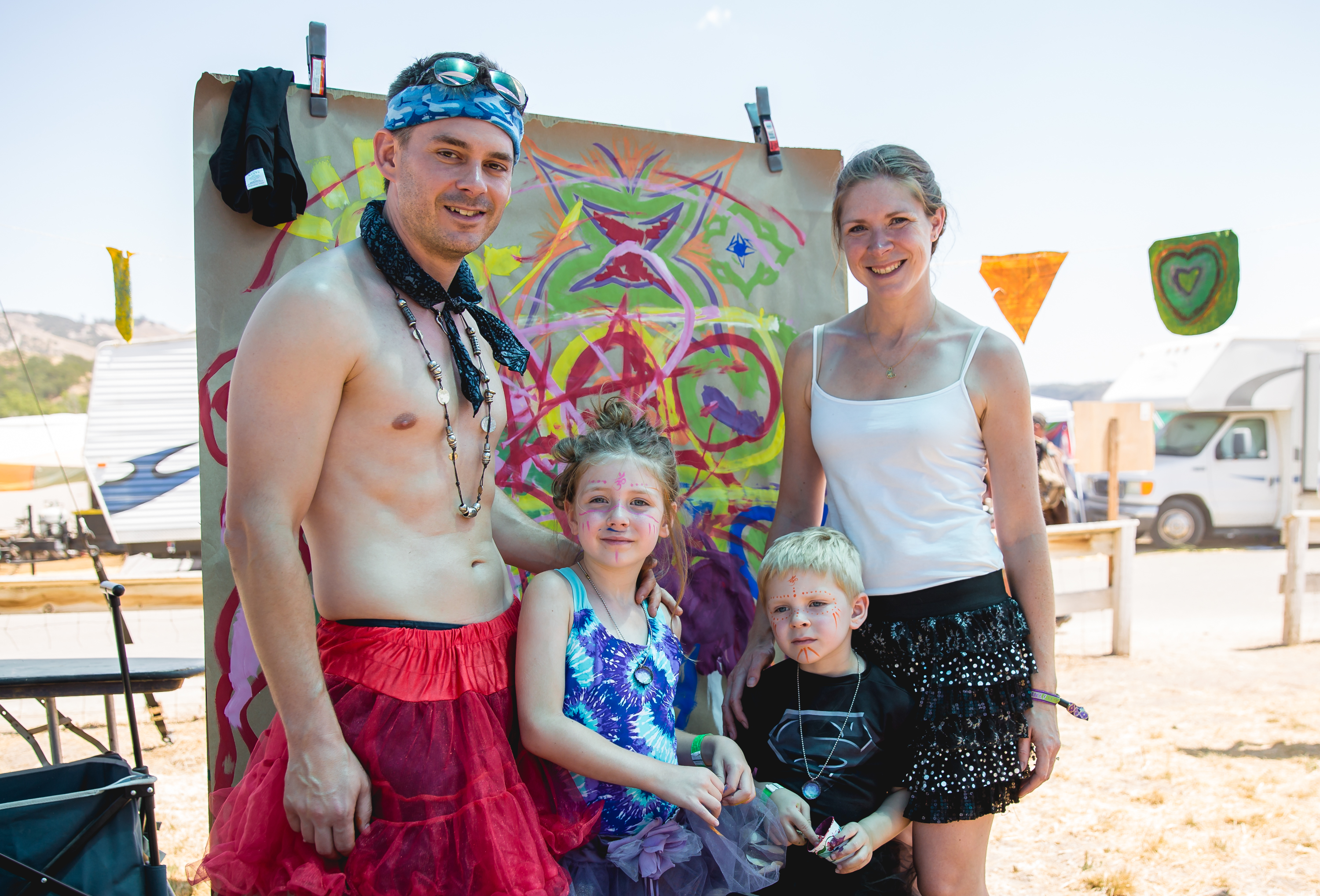 Meet Ben and Sarah, with their little ones Afelyn (almost 6), Odin (4), and Genevieve (2, not pictured). Ben and Sarah have experienced Burning Man twice, along with a few other major festivals. “The kids are always saying, ‘I can’t wait until I’m big enough to go to a concert with mommy and daddy.’ So we wanted to find a place where we could take them,” Ben said, optimistic about their first experience. “We’re having a really good time so I imagine we’ll be looking for more.”

When asked about navigating the nudity and drug use, Sarah laughed, “Well, we live in Vegas, so this is just everyday!” A sense of humor is key when working through uncharted terrain. Later, Sarah candidly attributed her ease regarding such topics to the kids’ lack of understanding. Ben and Sarah are still figuring out best practices for sharing childcare roles at the festival. 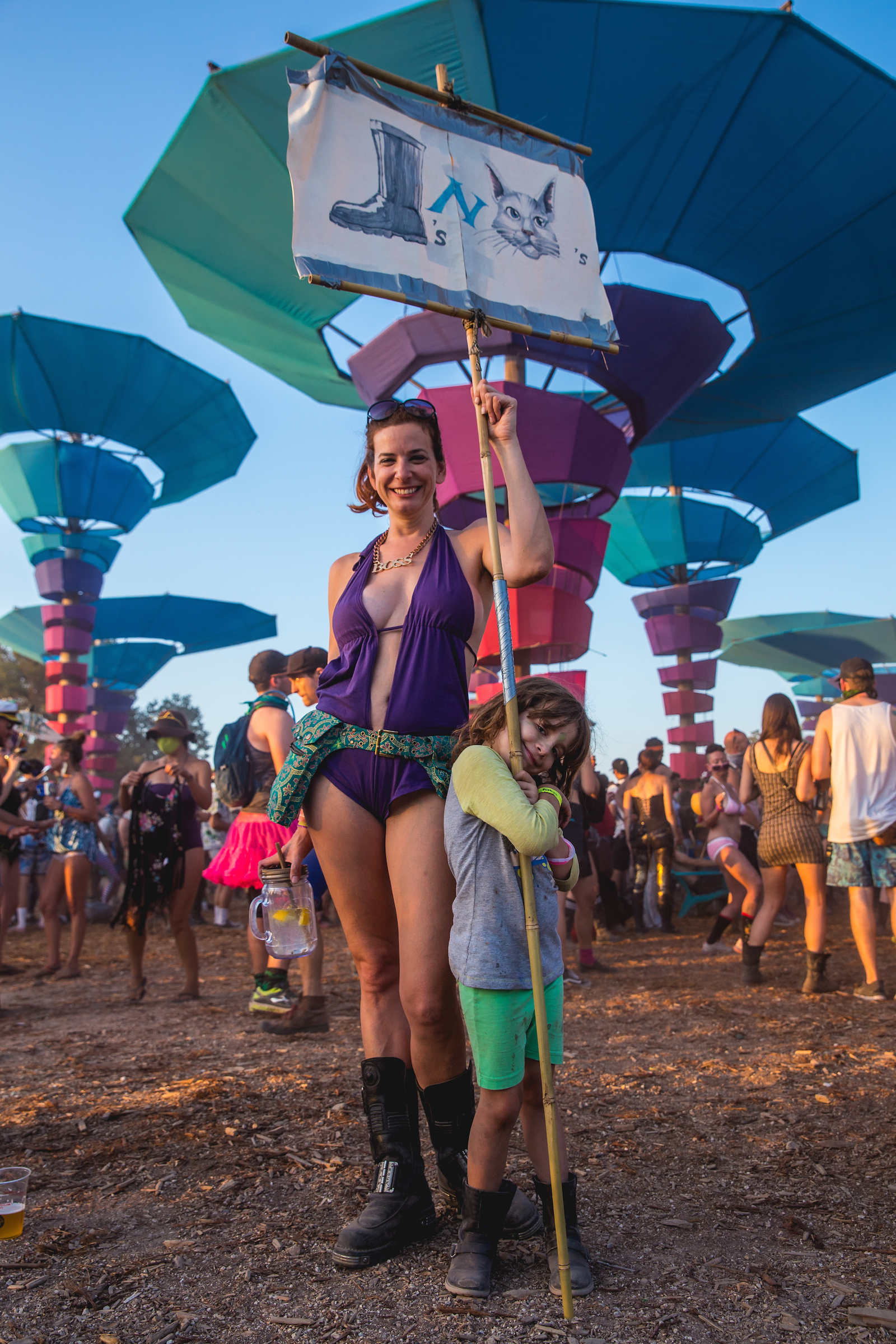 Diane (left), Penelope (right), and Dexter (not pictured) were spotted shaking legs at the Woogie Stage. Dad’s whereabouts were later discovered when getting deep with Dexter about one of his favorite moments from the festival. Aside from chancing upon some Double Bubble in a secret room within the mysterious Lightning Inn, Dexter was able to dance backstage at Woogie with Dad, a production crew member. “This is [Penelope’s] fourth or fifth, and [Dexter’s] sixth LiB!” Diane said, “This is our big family vacation!” In addition to the family bonding time, Diane also added the educational power of the festival, which is geographically located at the heels of the dried Lake San Antonio. “We’ve talked about the drought and saving water. We also walked around today and picked up trash.” 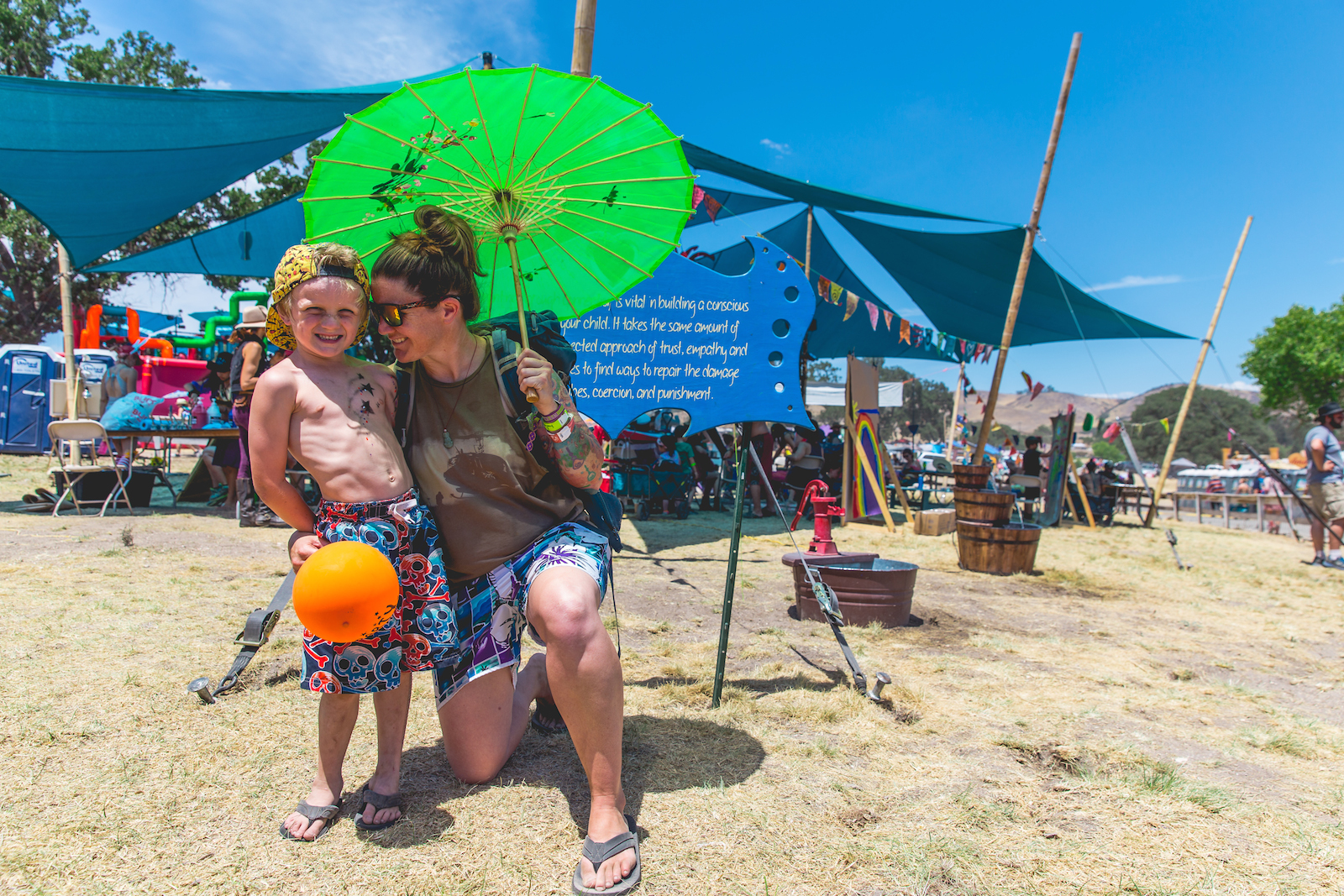 Diane wasn’t the only wise mama taking the opportunity to teach. Rhonda (right), mother of Carson (left) and Sydney (not pictured), began introducing important lessons she wishes she had learned earlier. “Here, kids can learn more about self respect, responsibility, and taking care of yourself. It’s good at an early age. I learned those lessons at 25, after I made all sorts of mistakes!” After a deep belly laugh, Rhonda got real when asked about nudity at the festival. “Most of this is classy enough self expression. It’s not out of control. I haven’t thought, 'they shouldn’t see that,' really with anything here.” 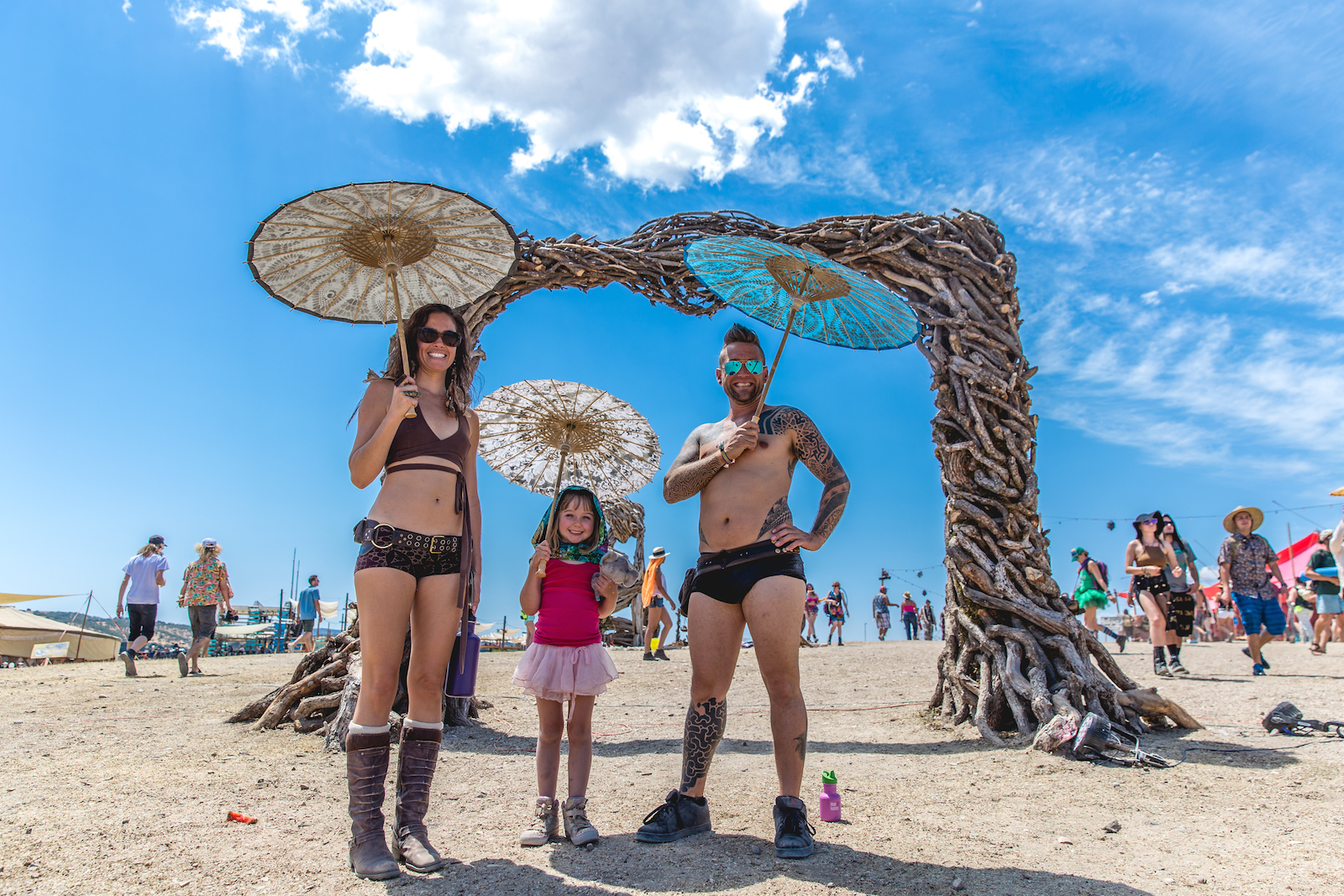 Another family, spotted near one of the walking bridges—later dubbed “The High-Five Bridge” for its constant gauntlet of uplifting hand slaps—displayed their own show of classy skin-bearing. Meet Sky, Kaya, and Maya Devi of Nevada City, California. Sky has been bringing seven-year-old Maya Devi to festivals since she was knee-high. Sky briefly shared, “the RV is a good thing to have to get your quiet zone.” This was a secret of survival that could have benefited another family we encountered sharing their first LiB. 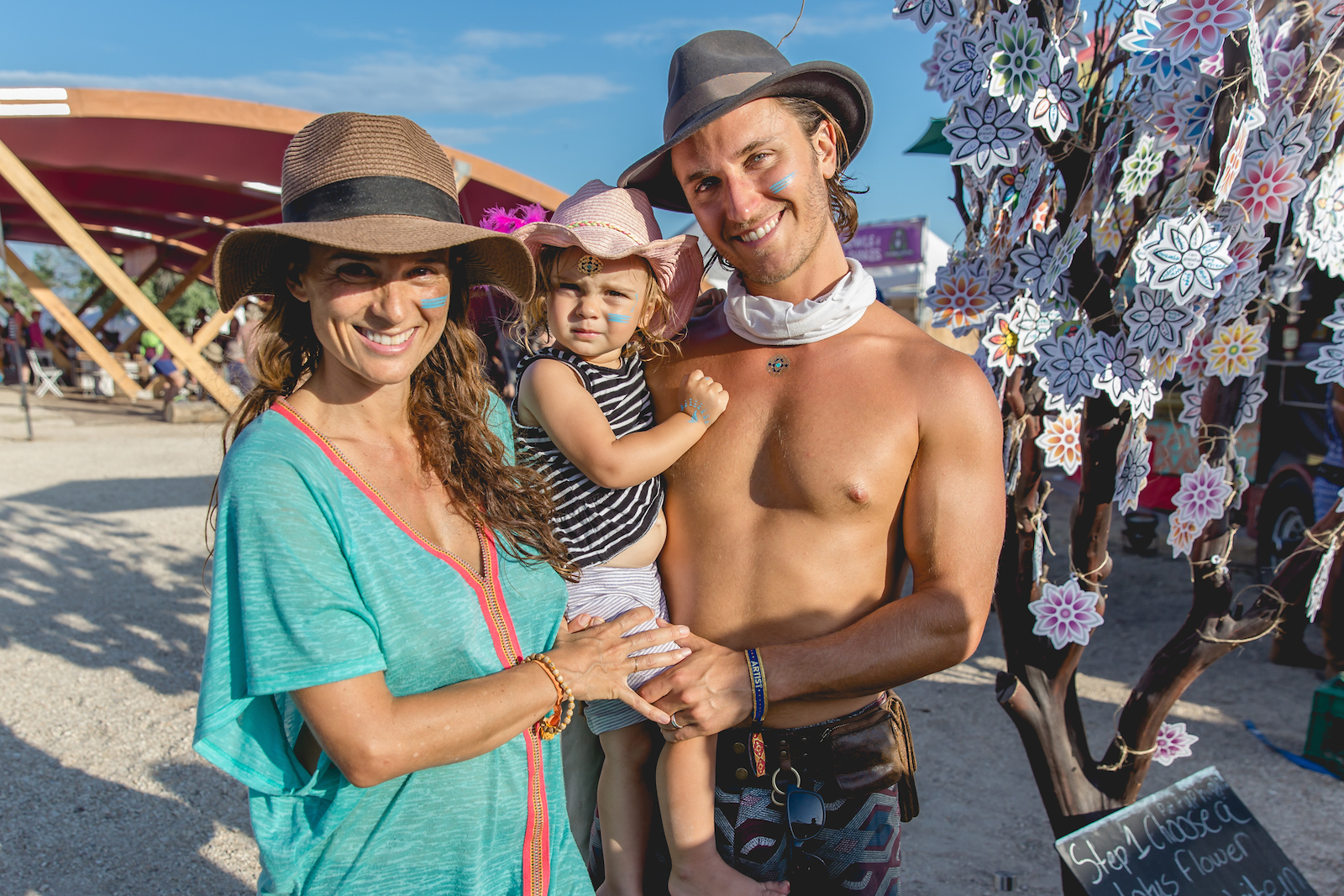 Found in one of the face paint stations was Jo, Soleil , and Stuart , another family of LiB first timers. Jo and Stuart are yoga instructors from Perth, Australia. Teaching at LiB brought this young family to California, their second home, for Soleil’s first big music festival at age two. Typically used to smaller yoga festivals, Jo expressed concern with the noise levels being too much for Soleil, especially the booming subs of the Thunder Stage. “It’s a balance, [always] looking out for her and asking is this going to be ok for her. We sleep in our car because the tent’s a bit noisy.” Lesson learned and misery negated by another good family festival hack.

Jo then went on to respond to the naysayers of families at festivals. “I think there is a very conscious crowd here, presenting a new way to come together. If you read the schedule about what is available, it’s pretty awesome. There’s a lot guest speakers here. There’s a lot of sharing of information. And then there are people who come here just to get wasted. So [if you’re one of] those other people who just wanna go party down, then of course that is no place for a kid. But meeting people and coming together and getting inspired and seeing art, artists and musicians...it’s amazing!” 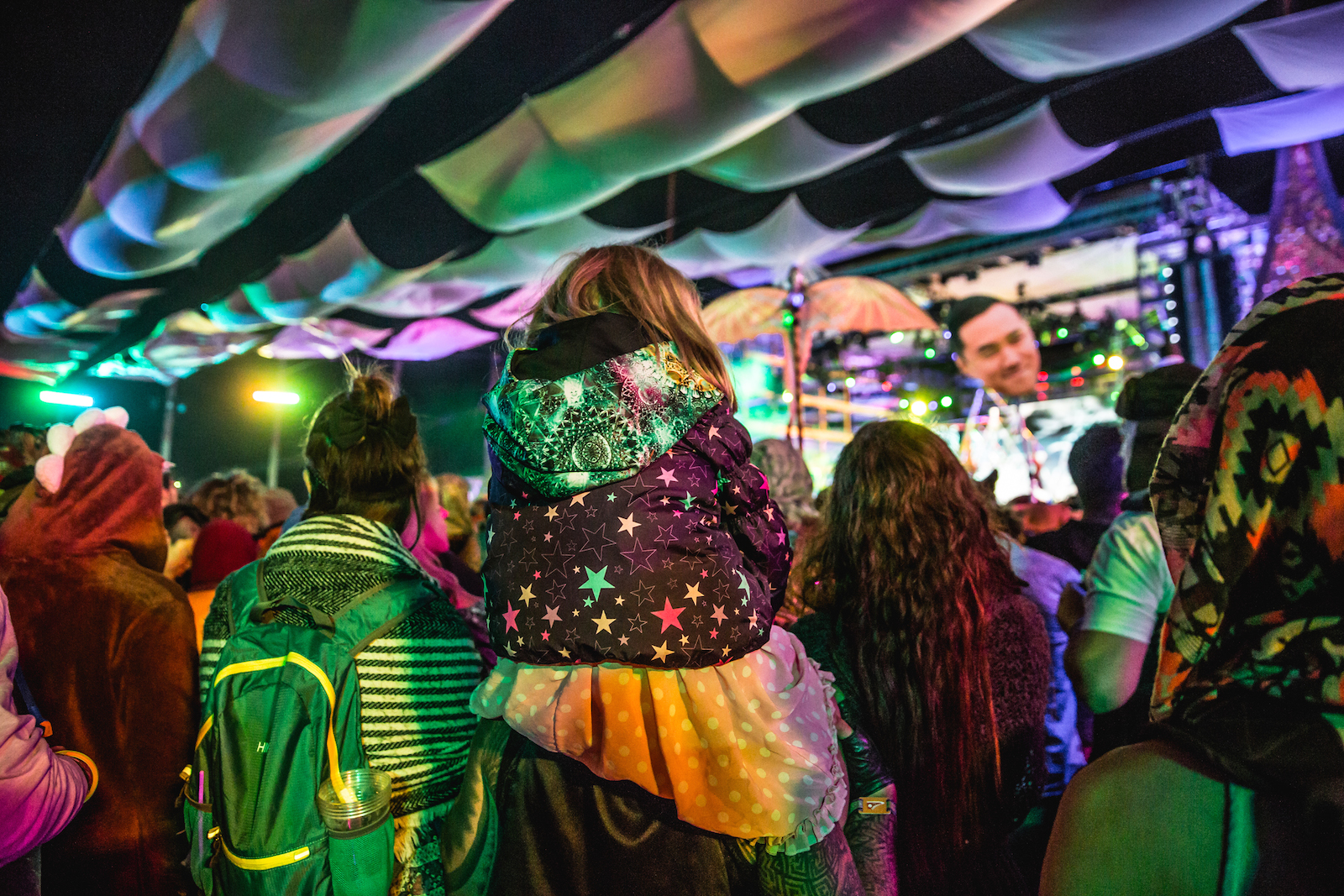 Lightning in a Bottle facilitated experiences that were both breathtaking and inspiring. The festival offered a plethora of lessons for all ages to absorb. The arid bed of Lake San Antonio reminded us all of the impacts of our drought, climate change, and the importance of conservation. The Learning Kitchen offered fun and healthy diet choices. The Temple of Consciousness bestowed an invaluable wealth of wisdom and alternative perspectives, from Prince Ea’s poetic pleas to redeem society to Tantric sex talks powerful enough to save marriages. LiB even saw a mad craftsman (William Close) command an “Earth Harp,” which stretched the entire berth of the Lightning Stage. The list of rich opportunities and magic was endless.

So, was LiB a family-safe environment? As long as parents are conscious, responsible, and engaged—as they should be in the world at large—Lightning in a Bottle is an experience that should not be devoid of families and children. Yes, the onslaught of low frequencies can be a bit much for a baby’s hearing. Parents, please chat with your child’s doctor and bring ear protection. Sure, there is some inappropriate behavior. But as we saw and heard from the moms and dads, nudity is almost all classy self expression at LiB and any debauchery was not overt. One offering the Do LaB may consider adding in future years would be free dust masks to prevent possible respiratory irritation from the dust. Although, well-prepared parents can bring such materials. With the festival at a close, we give LiB the Fest300 stamp of a very family friendly festival.