Sure, men dressed in white robes and tall hats spinning in circles doesn’t sound as exciting as running with the bulls or dancing at Rio Carnival, but the chance to watch the Whirling Dervishes will change you in a way you’d never expect.

Tomorrow marks the beginning of the 10-day festival known as the Mevlana Whirling Dervishes , held in wintery Konya, Turkey, which is based on the teachings and practices of the 13th-century poet Rumi. The festival sees the Whirling Dervishes (also known as the Mevlevi Order) in flowing white robes perform smooth, elegant, trancelike dances, morphing into a collective visual symphony in the Mevlâna Cultural Center, which fits nearly 2,000 people and was built primarily for whirling ceremonies. The moment when their arms, folded across their breasts, raise to the sky—the right arm facing up to God and the left arm turned down to the earth—will give you a contact high more profound than any you'll find on the dance floor.

The video above does as astoundingly excellent job of capturing the ritual. The men's whirling is only enhanced by the 360-degree projections, which cover the walls in birds and trees, and make the floor look like it's made of shifting tiles, then celestial scenes of constellations and stars, then fields of grass and flowers.  Held together by primal grooves and increasingly trippy imagery, it's impossible to tear your eyes away. 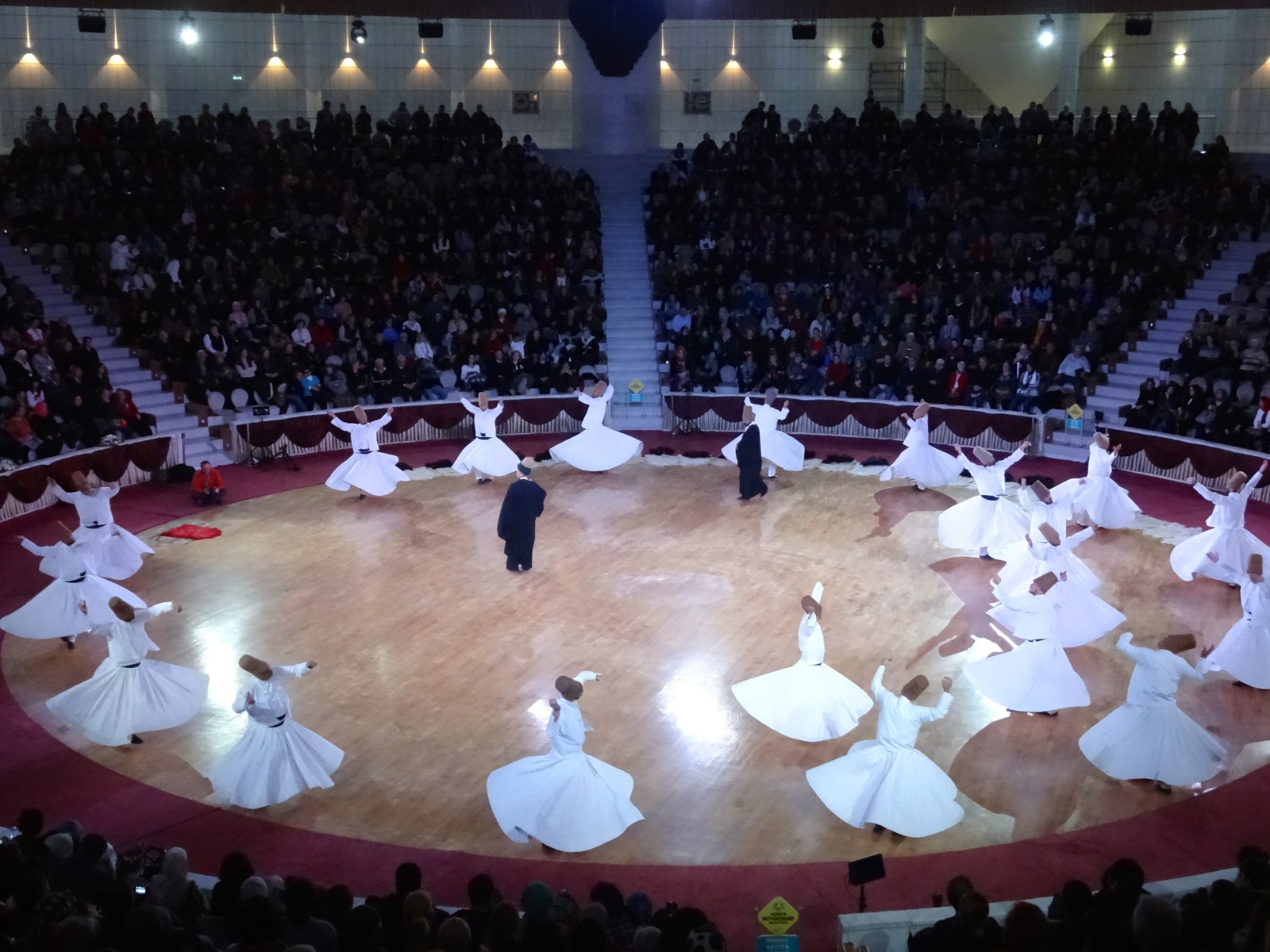 Finding inner peace through whirling didn’t come out of nowhere. Rumi was born in Afghanistan and spent time in Persia (present-day Iran) before moving to Konya, Turkey, where his father was invited to be a scholar. Rumi became a scholar himself, teaching peace, love and tolerance, for which he gained a large following. Educated followers saw him as a wise philosopher, while the uneducated regarded him as a prophet. Rumi’s life changed when he developed an intense learning relationship with an older, wandering mystic named Shams of Tabriz. Unfortunately Rumi’s followers didn’t approve of Shams’ influence, and supposedly killed the mystic. From tragedy comes discovery, and Rumi found within him an ability to channel poetry. It was also at this time that Rumi introduced whirling as a method to achieve divine harmony. Thus a movement was born. These men have been honoring Rumi’s death for almost 750 years, marking his “wedding night” with God on December 17, 1273.

Whether you’re religious or not, you’ll be struck by the sense of oneness you feel with them and how that transfers to deeper feelings of spirituality – no matter what that word means to you.