Every spring for the past 25 years, Noise Pop Festival transforms the San Francisco Bay Area's urban centers into its very own festival playground for music, art, film and independent culture lovers everywhere.

The festival has made its name celebrating champions of the underground and the lauded critical darlings of music, all of whom gather to play a gauntlet of shows across multiple venues during Noise Pop's week-long stretch. This year, the festival's 26th in existence, continues that tradition with a bombastic Phase 1 lineup featuring tUnE-yArDs, Real Estate, Black Rebel Motorcycle Club, Parquet Courts, San Fermin, Why?, Ben UFO, No Age, Japanese Breakfast, Superchunk, Mount Eerie, Rostam, Cuco, Geographer, Girlpool, and many more. 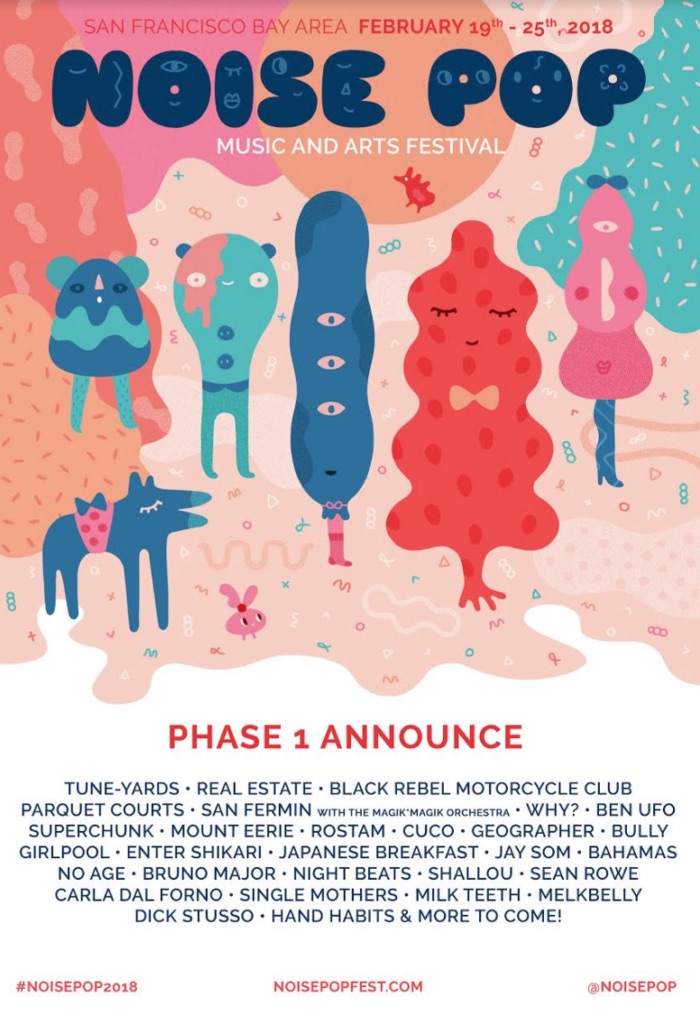 Last year at the 25th annual event, Noise Pop Festival saw its highest attendance yet in the festival’s history with nearly 90% of the acts playing to sold-out crowds. In total, over 28,000 people attended the 2017 festival, and 180+ music artists played across more than 17 Bay Area venues, with additional events including concerts, film screenings, art shows and more.

Over the last 25 years Noise Pop’s namesake festival has provided exposure to some of the top emerging artists, many of which have gone on to widespread acclaim, including The White Stripes, Modest Mouse, Death Cab for Cutie, The Flaming Lips, The Shins, Fleet Foxes, Bright Eyes, and Yoko Ono. While its roots lay in noisy, alternative and experimental rock, it has since expanded to include genres like hip-hop, electronic, metal, and more.

We'll be looking forward to the second phase of additions to the lineup as well as the music-centric film series announcements. All shows are individually ticketed, but a limited amount of General badges are available now and can be had here, starting at $175 +fees (Early Bird badges are already sold out!).