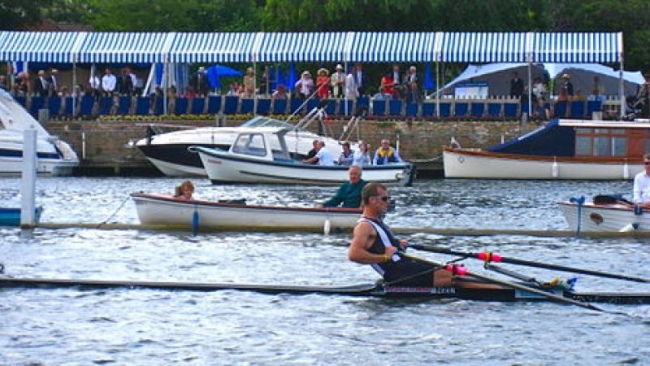 The likelihood is that you’ll be watching the rowing from the south (Berkshire) bank of the Thames as that’s where the general public gathers. On the other side of the river are exclusive private residences, corporate hospitality sites, and the ritzy Phyllis Court Club. But, being a plebe in this society is still swanky as there are immaculate lawns, really nice food facilities, and covered grandstands (as you never know this time of year whether it might rain or scorch).

And, yes, this is a sporting event. There are 20 events in total with the most prestigious row being the Grand Challenge Cup for Men’s Eights where you’ll see a few Olympians (although not in years when there’s an Olympics). Dozens and dozens of crew from all over the world, this is an international event. And, after years of shunning the women, there are now Women’s races as well. Best of all, the races are side-by-side rather than multi-lane events. This is a less forgiving format.

I recommend you and your Regatta compatriots each pick a rowing team and then become groupies. Follow them around, root for them, and stage the age-old tradition of throwing the member of your group whose team does the best into the Thames.