Spoleto: Perfect Location, But Where Are All The People?

In this era when Electronic Dance Music (EDM) festivals are capturing so much attention – in part due to their abundant financial valuations – I was excited to make the two-hour trek from Siena, post-Il Palio, to Spoleto to experience the 56th annual Spoleto Festival dei Due Mondi (Festival for Two Worlds). I even cancelled my planned trip to the World Body Painting Championships on an Austrian lake (challenging travel route) to make it to this World Heritage site in an Italian hillside village. Spoleto has history and patina… 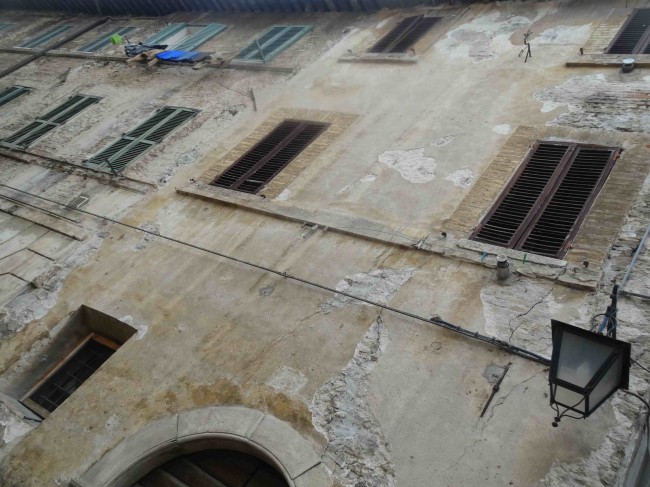 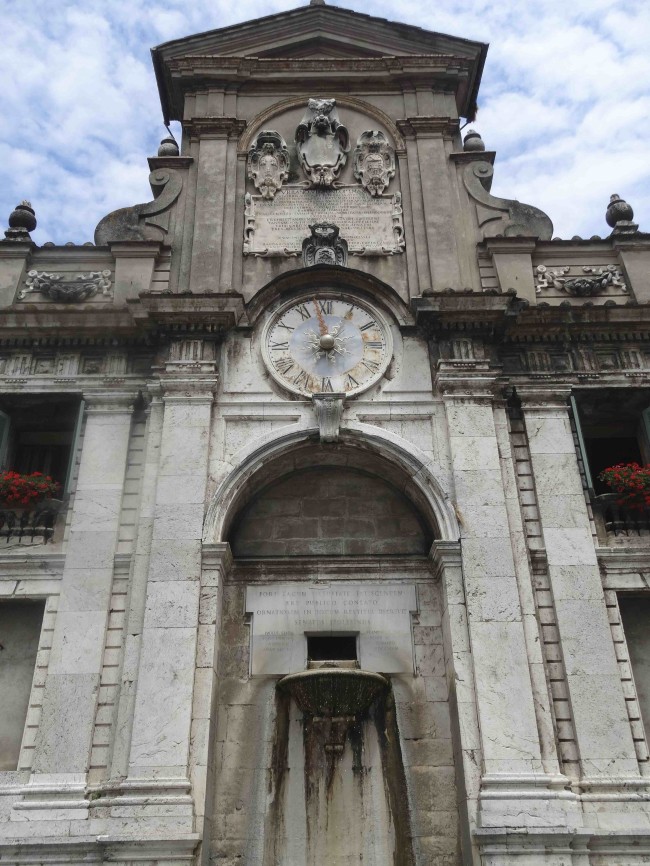 Given its location at the head of a large, broad, fertile valley, Spoleto long occupied a strategic geographical position in the area. 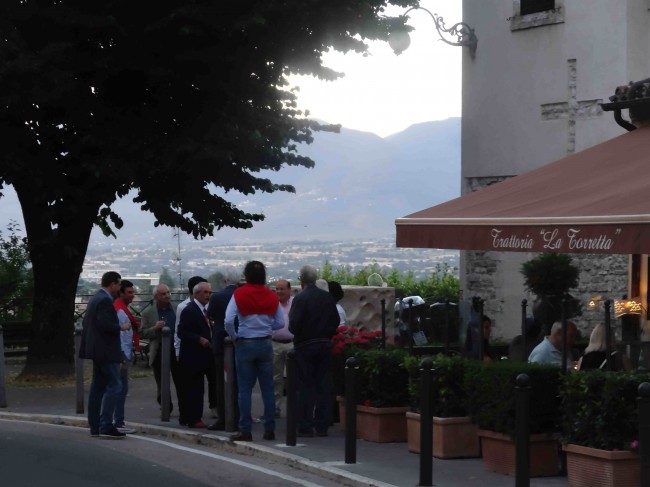 And, there’s history in this stony town. If only the stones could talk or as one person said to me about their elderly friend, “He’s as old as the stones.” (I’d privately hoped he was talking about the Rolling Stones and we might see some surprise Spoleto visitors.) A walk around this vertical village will have you gazing at art or frescos from 1,000 years ago. 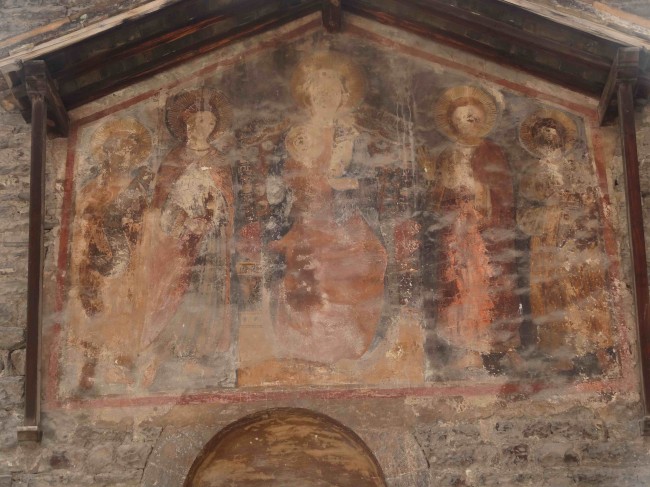 This place isn’t just full of history, it’s chock-full of charm as well. The combo of small scale, winding alleys, quaint shops, and the appreciation for the arts makes it the perfect habitat for a romantic getaway. 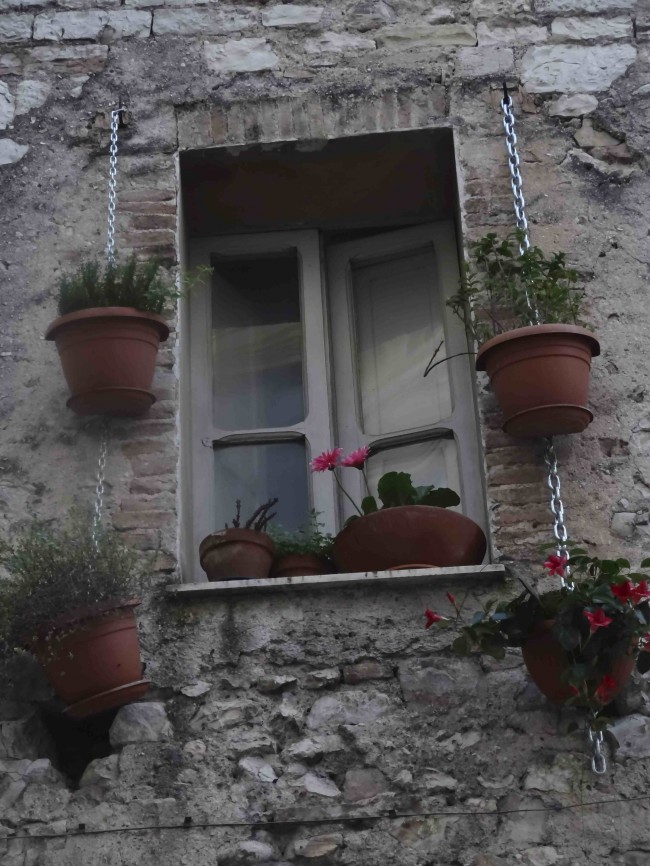 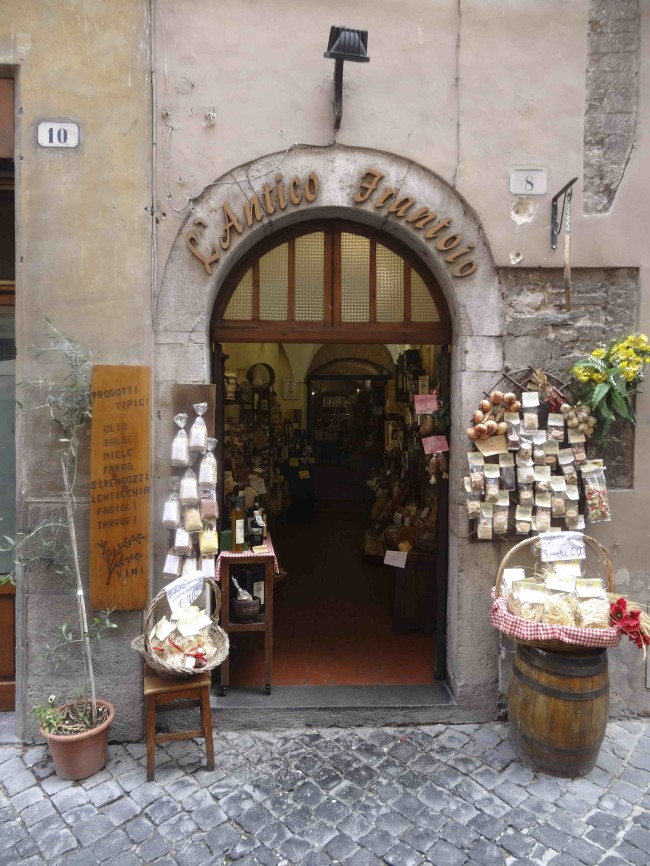 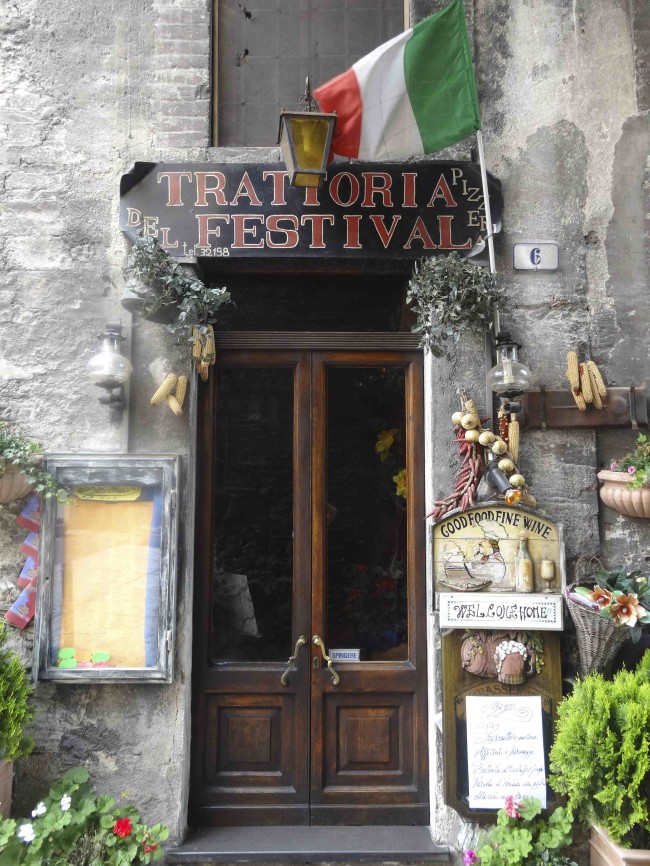 Loved that this restaurant had “festival “ in its name

And, you can feel the artistic bohemian flavor in some of the shops. It’s an atmosphere ripe for one of the world’s premier performing arts festivals. Alexander Calder even left a series of sculptures to the city that are well-placed throughout the meandering walkways. 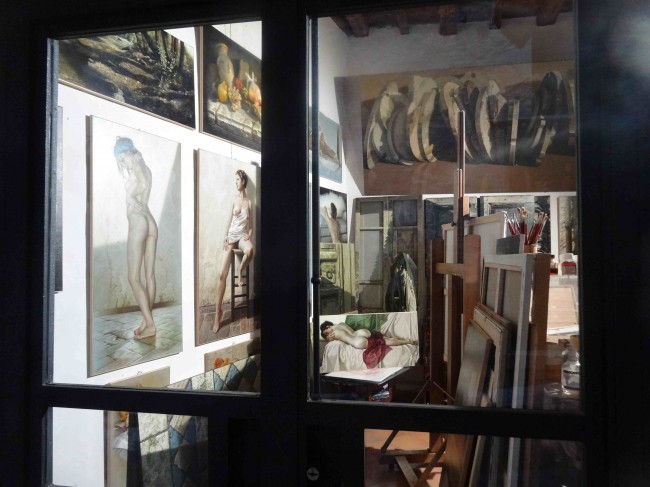 Pulitzer Prize winner Gian Carlo Menotti felt that same way in 1958 when he created the first Spoleto festival, taking advantage of the relative proximity to Rome as well as the wealth of diverse performing venues in this town. 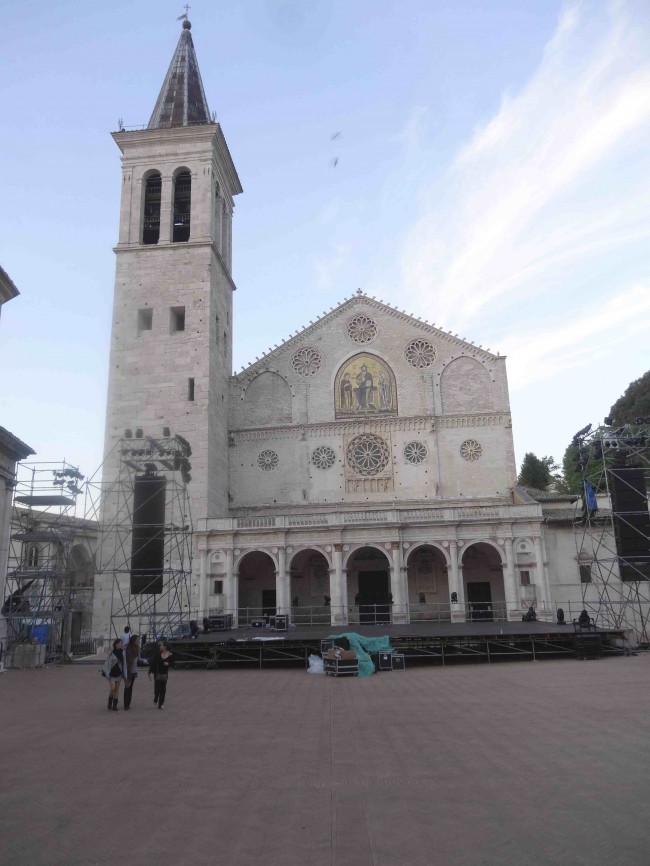 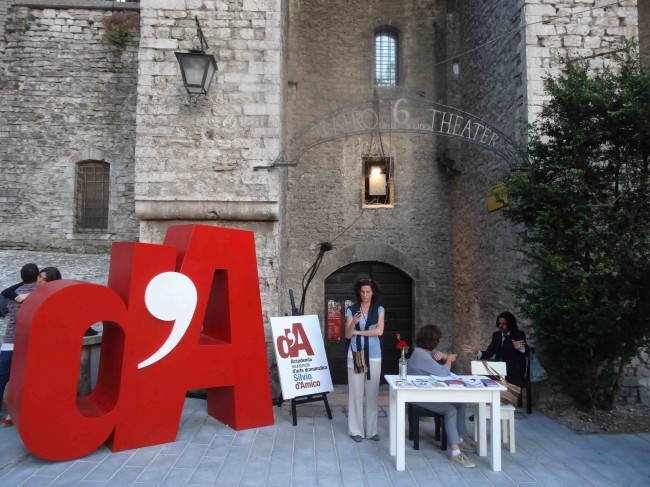 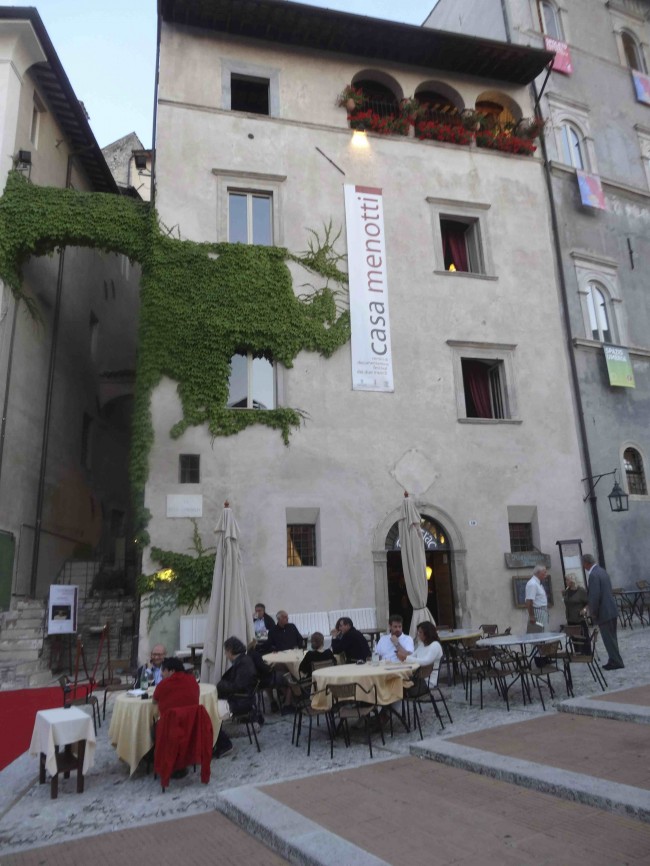 When I arrived in town I saw a big festival poster with Mikhail Baryshnikov and Willem Dafoe on it. Wow! I was getting excited. And, then, I started seeing the floating balloons around each corner of the hillside pathways. 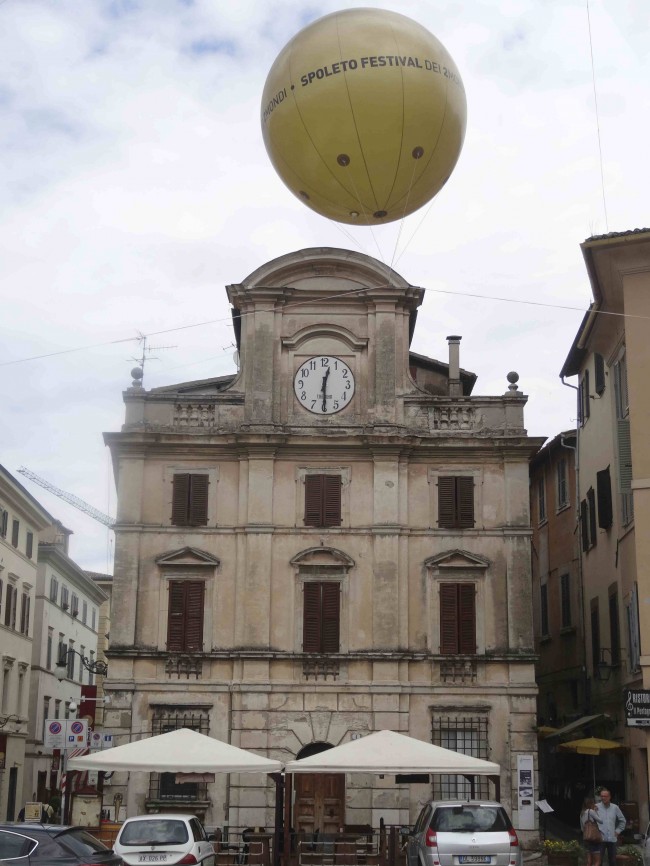 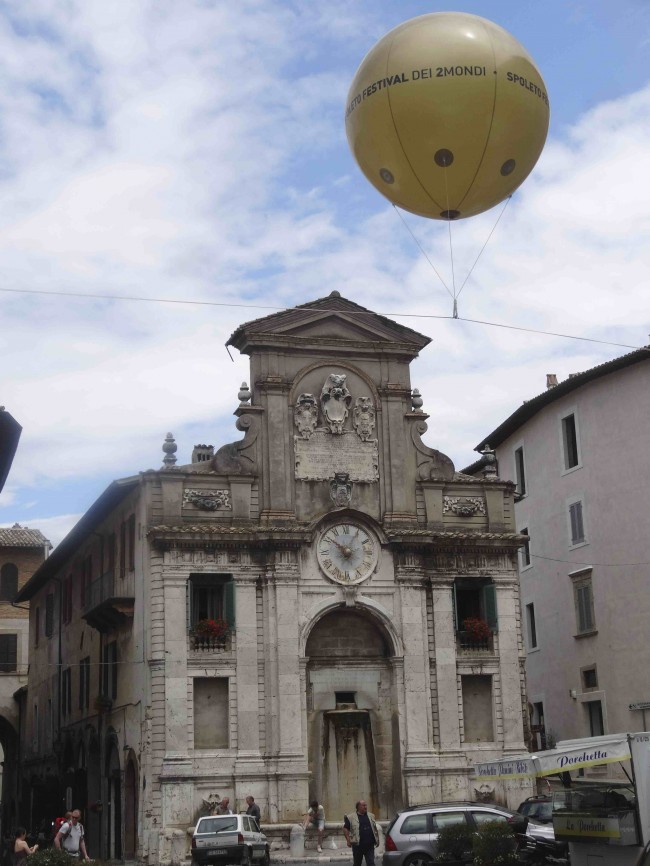 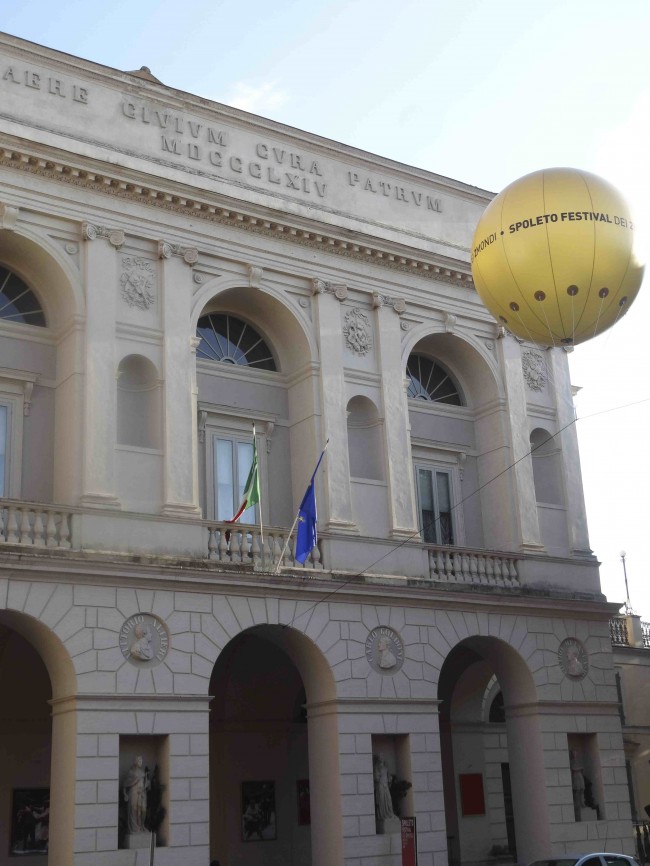 But, I started noticing there were more balloons than people. I arrived mid-afternoon on a Wednesday so I thought maybe people were napping or filling restaurants, but many of the restaurants looked closed. Hmm….I went to the closest ticket office and that’s where I learned about the fate of Spoleto. 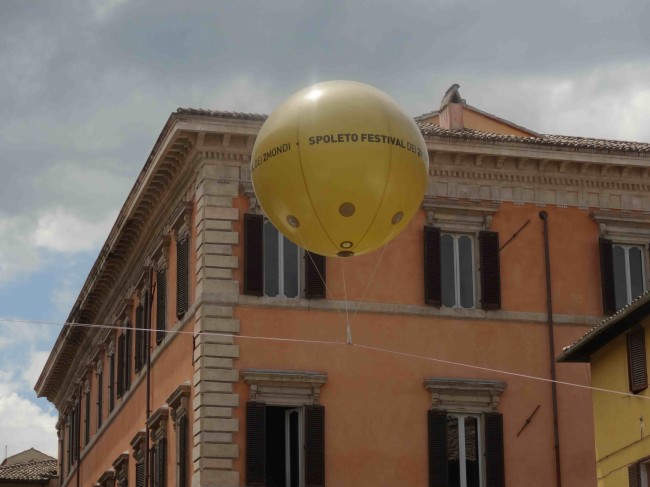 While Spoleto lasts 17 days and does have some well-known arts groups (this year featuring the Mark Morris Dance Group and L.A. Dance Project as well as a John Weidman dance/theater piece called “The Piano Upstairs”), it’s pretty slim pickings on weekdays. Yes, there’s a European Young Theater show most evenings and a classical duo in concert outdoors in the evening but there’s not much more than that. I also started to notice that most of the people roaming the streets were born before this festival started 56 years ago. Maybe the whole new wave of EDM festivals had popped the Spoleto balloon. 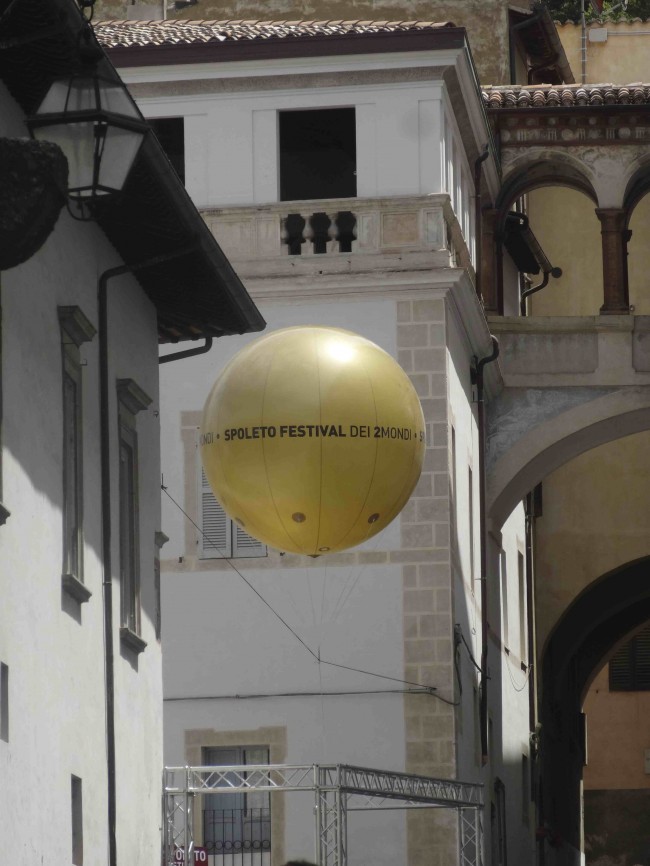 Or maybe the rift with the American Spoleto, that was created in Charleston by Gian Carlo Menotti in 1977 because it matched the charm, history, and arts flavor of this Italian hillside village, had poisoned Spoleto’s momentum. In fact, I started pondering how the U.S. continues to be the place where European festivals take steroids. Witness not just the larger version of Spoleto in South Carolina, but Art Basel Miami Beach surpassing the numbers in Switzerland. And, I bet Tomorroworld, the Atlanta-based new born from Tomorrowland in Belgium, will blow up to bigger than its European EDM counterpart by the time it reaches puberty. Oddly, all three of these U.S. sprouts are in the American South.

So, what are we to make of a festival that’s seemingly in decline, especially in the financially-challenged classical arts world? Well, there was one good piece of visual news. Any festival worth anything these days has some kind of Fringe or Anti-Festival in its midst and that was the case in Italy as well. 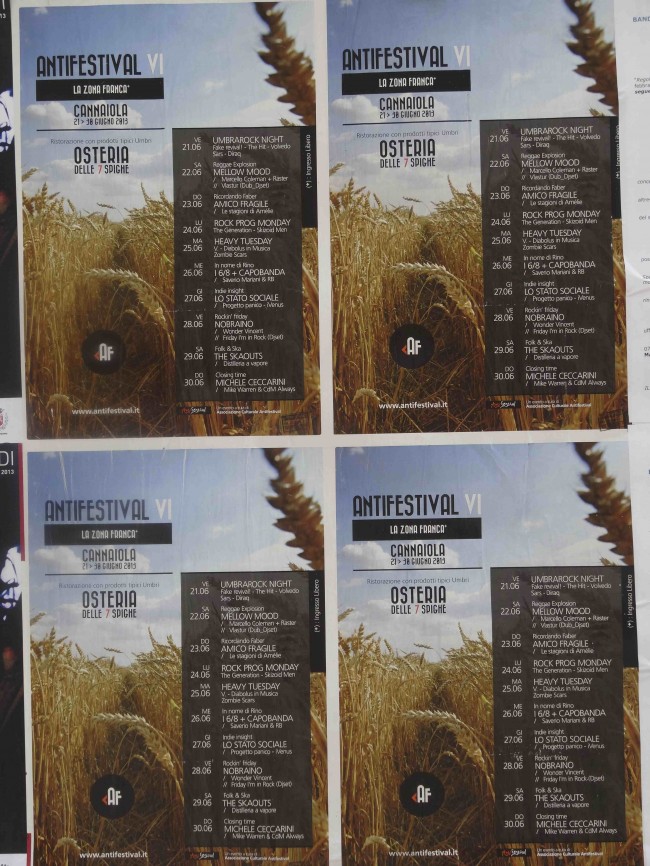 During my two days in Spoleto, I looked for art wherever I could find it. I even went backstage to watch Matthew Aucoin, Keir GoGwilt and Paulo Szot warm-up for their Concerti Al Chiostro. 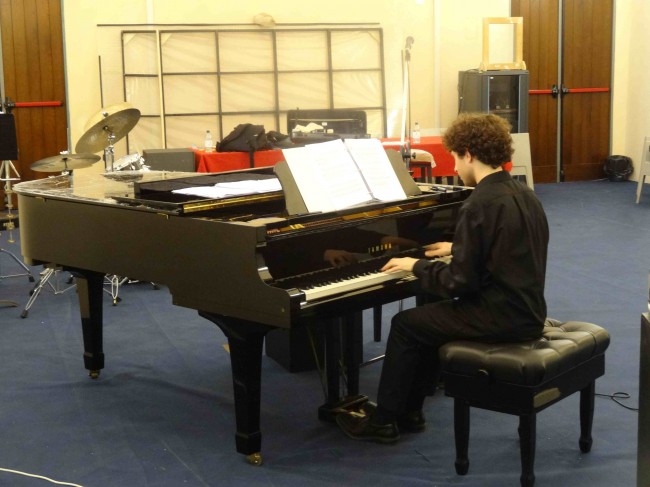 But, while the setting was robust, the audience was emaciated. Maybe 50 people sitting outdoors in a space made for 250. And, on this July 4 (when the pianist started the concert with an American-written piece to celebrate U.S. Independence Day), it felt like the firecrackers were happening elsewhere, but not in Spoleto, as this was the highlighted show of the evening. 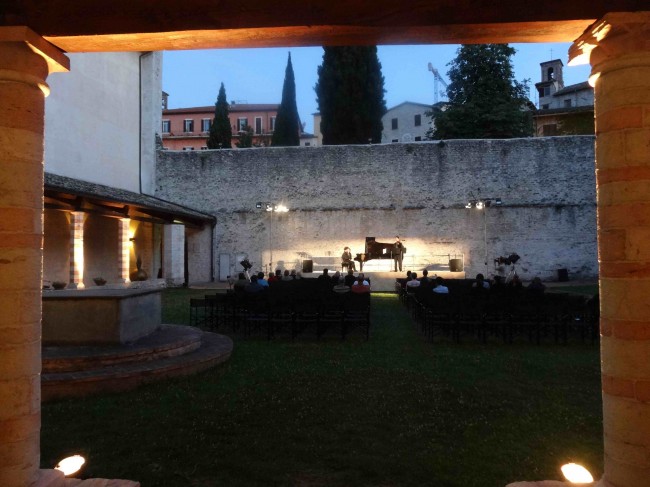 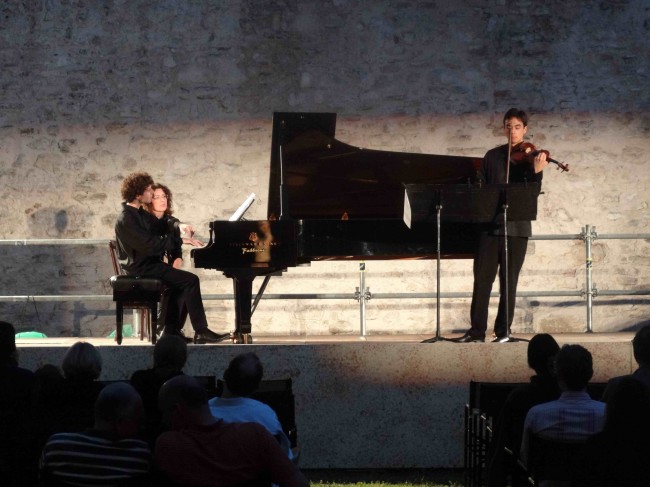 Would I recommend you go to Spoleto? Yes, go for a romantic affair or for some midday meandering if you’re looking for a quiet refuge (much appreciated after the frenzy of Siena and Il Palio). And, if you’re coming for the festival, make sure you plan to come during Friday-Sunday, the time when the better-known arts performers will be on stage.

For me, I caught up on some sleep and learned a few new spells that I might be able to use this weekend at the Oil Wrestling Championships on the border of Turkey and Bulgaria. The main spell I conjured up for Spoleto as I split town was for Mick Jagger to miraculously appear and perform a buzz-worthy concert to reinvigorate this lovely, but languishing festival. 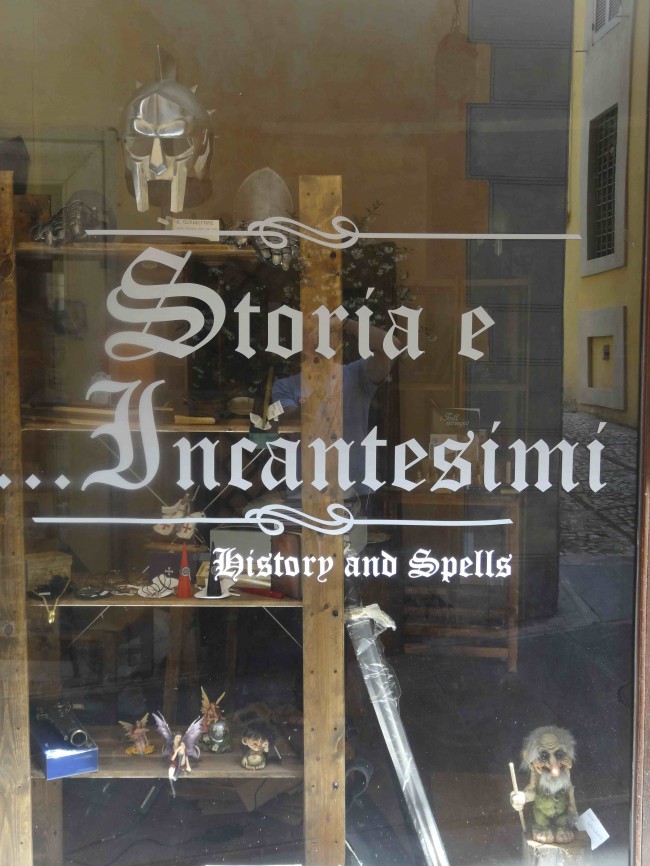 But, then as I sat at the Spoleto train station going to Rome, I had a delightful talk with a 27-year old theater student who’d come to Spoleto to watch the young people’s theater. Simone LaBarca’s energy reminds you of Roberto Benigni in the Academy Award-winning “Life is Beautiful.” His enthusiastic endorsement in this “festimonial” video interview of why he loved the festival and Spoleto had me wondering whether I might come back and try the festival again when I wasn’t in such an post-Il Palio stupor: