AfrikaBurn: That Other Thing In The Other Desert

The milky way shines bright in the African night and the playa of the Tankwa Karoo is littered with rocky shale and dry, crunchy little shrubs. At AfrikaBurn, the sunsets and sunrises are just as awe-inspiring as those of the Black Rock Desert, perhaps even more so. The stunning mesas which enclose the surrounding veldt reflect deep reds that remind one that yes, this is Africa. The road to the event presents its own right of passage, viciously eating tires like a lion devouring a limping impala. The leftover carcasses are called “stofadil” and you aren’t really a burner here if you haven’t dealt with at least one of them.

AfrikaBurn is the largest regional event in the Burning Man network. The 11th anniversary of the event took place in the last week of April in the temporary city of Tankwa Town five hours northeast of Cape Town. Veterans of the Nevada regional say that AfrikaBurn reminds them of the early years of Burning Man. It is certainly smaller and more intimate with around 13,000 participants. Like other regional events this burn reflects the unique flavor of its homeland and as such it represents iterations on its American parent.

Instead of burning a man, the main effigy of this burn is called “The Clan” an ancient rock painting by the original San people from Tarkastad in the Eastern Cape. The strange symbol depicts many heads, one body and many dancing legs. The idea is that out of many there is one, and that one is dancing. AfrikaBurn co-founder and graphic designer Lil Black (aka Lil Visser) explains another reason the San Clan was chosen. In rock painting, a polymelia image depicts ‘the sensation of having one or more extra limbs as a result of hallucinatory sensations experienced by dancing shamans as they perform healing, rainmaking and other rituals during a trance dance ceremony.” So… you know, vibes. 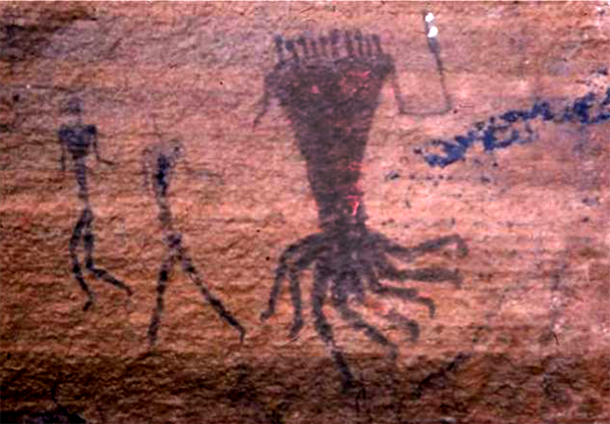 In addition to the 10 principles of Burning Man, in South Africa there is an 11th principle: Each One Teach One, a sharing of knowledge that is an intentional embodiment of the acculturation practices of Burning Man’s expansion worldwide. According to its website, the participants of AfrikaBurn believe “the responsibility of spreading our culture lies with each and every one of us. All of us are custodians of our culture – when the opportunity presents itself, we pass knowledge on.” In the spirit of the 11th principle, after I conversed with an AfrikaBurn virgin and she asked me, “Aren’t you supposed to give me something?” I explained the concept of a gifting economy and allowed her to depart with my silly hand fan – which, in my opinion, was rather a nice thing to give someone who was practicing radical self-entitlement.

AfrikaBurn shares the culture and vibe of Burning Man in many ways with its self-expressive costumes, wild, mutant vehicles that look like glowing snails, and long nights of non-ordinary states. There are whimsical theme camps like Wonka Willies, the Unusual Suspects and Lekker Bar which uses traditional Afrikaans words to remind all who drink: “Don’t Be a Poes, Be Lekker.” Amongst the theme camps there were even Burning Man transplants like Bubbles and Bass. AfrikaBurn boasted beautiful, large-scale art pieces such as the owl Uhlu and Yggdrasil, the Tree of Life from Norse Mythology, which burned hotter than any structure I’ve ever felt.

Like That Thing in The Desert, AfrikaBurn isn’t without its contradictions. Indeed, with a complex history like that of South Africa, it is understandable that the event would amplify certain divisions as much as it enhanced the good-hearted attempts to overcome them. I will explore these challenges more deeply in a followup article about my own experience at AfrikaBurn. But for now please enjoy these beautiful photographs from French photographer Gilles Bonugli Kali , and Brazilian photographer Juliana Matos . For me, these images capture the heart, soul, and vibe of That Other Thing in That Other Desert.