Even with two completely separate programming sets (Sónar by Day, Sónar by Night) and eight stages across three Barcelonian venues packed with over 100 live bands and DJs, Sónar Barcelona  was the perfect blend of manageable festival-ing despite a packed array of creative displays.

For three days this past weekend, more than 126,000 people turned out to experience Barcelona's premier celebration of music, technology and creativity. As a first-time Sónar attendee and lover of the wild and weird, it was my personal goal to experience every area of the festival's offerings at least once - workshops, musical headliners, installations, those classic bumper cars at Sónar by Night, etc. After three full days of techno, rock, immersive art installations and extraterrestrial vibes, these were five of Sónar's most memorable experiences.

Thank the festival gods I experienced this installation on a moderately chill Saturday afternoon with a clear mind and a fair-enough night of sleep. Immersive visual experiences take center stage at festivals these days; VR installations and mind-twisty zones like Sonar360 by MediaPro should always be part of your festival agenda. For sixty minutes, I joined fourty-ish people in laying on the floor under a fantastic array of immersive fulldome films from Canada's Société des Arts Technologiques.  Somewhere in the middle of that hour, (a chunk of time that seemed endless yet barely even five minutes?), I'd mentally whizzed off to another galactical plane.

First, neon patterns stacked and fell as they morphed from squares to rectangles in "Indivisible." Next up, my personal favorite film of the program, a distant amorphous, vague red blob glided down towards us. As it drifted closer to us dazzled floor-layers, the spindly blob reminded of a cell in mitosis, swirling and splitting in half, with a dark nucleus-type center still in tact. In its final flourish, this red microbial blob turned into a devil-like set of claws, slashing at me while still being maintaining its delicate blob form. Ooooooh boy. After that mind-f-ery came “Indivisible," followed by immersive fulldome movie “Nascent” from Vergil Sharkya in collaboration with Push 1 Stop. Petr Rimsky's “Cage,” was unsettling, as dozens of shadowy human figures scaled the walls of a cage whose walls never stopped extending, then tumbled off the walls and fell right into/on top of us viewers. The last film of the set, "Cage" was creepy and weird and gave me the heebs. I didn't want it to end.

Even before LCD Soundsystem retired in 2010, and since their unretirement in 2016, disco balls factor hugely into the legendary New York band's disco-rock aesthetic. The mirrored wonders graced not one but two of their album covers, and fans who've caught any of the band's sold-out runs across the world know they can confidently expect a show from James Murphy and gang.

LCD Soundsystem's Saturday night headlining set, led by Murphy (who capped off a weekend full of DJing at Sonar's Despacio stage alongside 2manydjs) featured all the crowd favorites, including yes, that epic disco glory. Towards the end of first song "Get Innocuous," that ball of wonder exploded with rays of light in a million directions. It was the show's peak disco-rock moment, and no one could stop talking about it all night.

Sónar Calling GJ273b Control Room : Aliens Are Out There, Everyone

Back in November 2017, Sónar dropped its first cryptic announcement for Sónar Calling, an ambitious experiment to contact extraterrestrial life ahead of the festival's 25th anniversary celebration. The idea was to unite music and science to connect and communicate with extraterrestrial life on a potentially habitable planet GJ273b. Organizers partnered with METI International and Institute of Space Studies of Catalonia (IEEC) to get things going in Tromsø, Norway, and Sónar headliners and artists Alva Noto, Autechre, Richie Hawtin, Carsten Nicolai, Modeselektor, Laurent Garnier, Holly Herndon, Matmos, Jean Michel Jarre, Nina Kraviz, The Black Madonna, Kate Tempest, Kode 9, Laurel Halo and Daito Manabe came on board with sonic interpretations for the festival's display.

It was 4:25am on Sónar's closing night, and if anyone in the packed SónarClub main stage was tired and/or over it, they did a fantastic job of hiding it. As showcased in the video above, Richie Hawtin's CLOSE was a body-rattling series of bangers, elevated by the show's spontaneously synchronized background visuals and thick, non-stop plumes of fog. 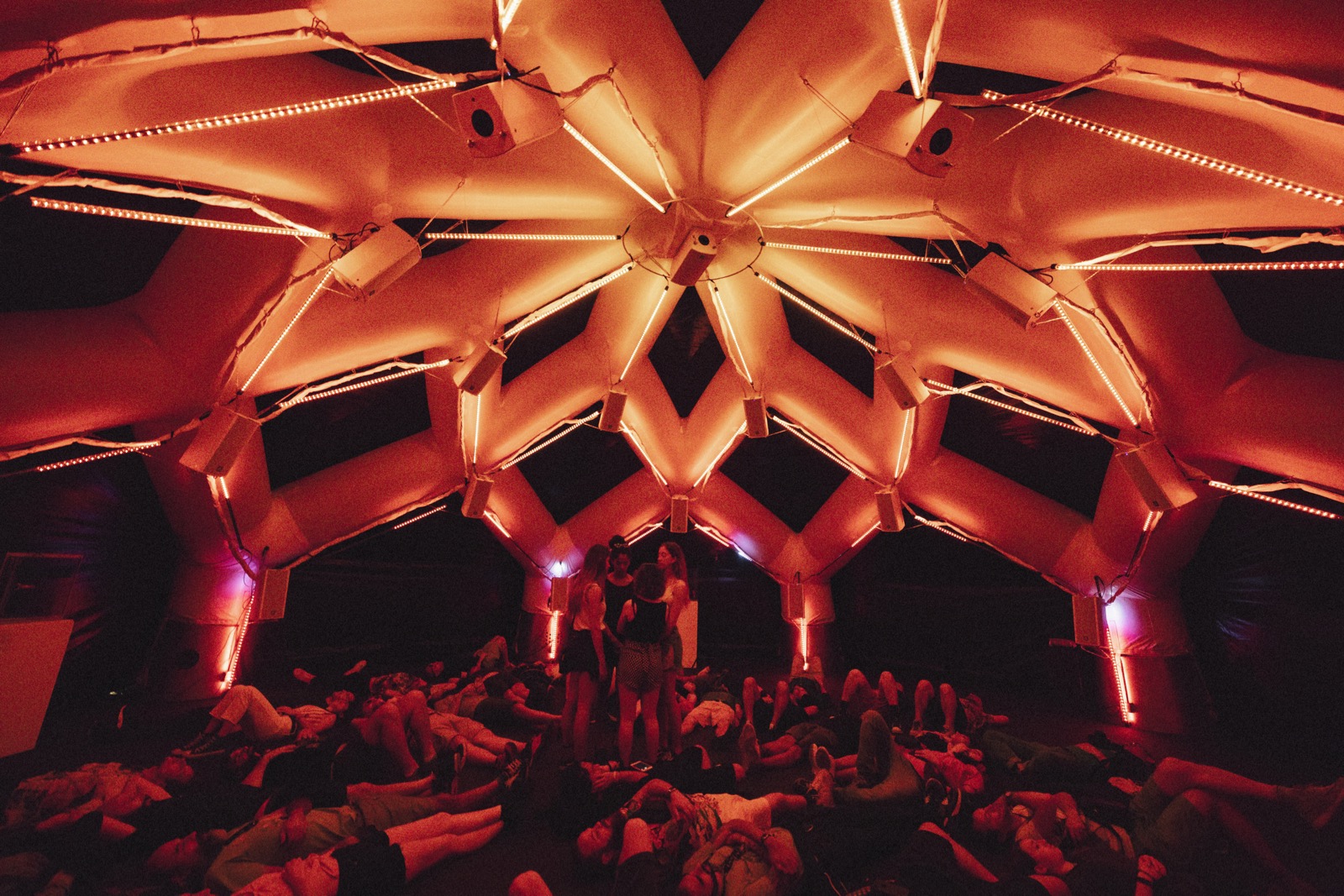 From the outside, Zero Gravity Band looked like just another unassuming, mysterious geodesic dome at a festival packed with unassuming, mysterious geodesic domes. On the inside? Created by Mike Pfau and Guillermo Barguñó and the Quo Artis Foundation, Zero Gravity Band examines how gravity affects our perceptual and physical experiences. Intended to induce in participants the same sensation that astronauts experience in zero gravity, the installation used 360-degree light and sound to blast us through our mere earthly perceptions.

After a lengthy line, curious festies were led past the art collective’s space suit prototypes into the darkened dome. A guide instructed us on the best position to experience the maximum intended effect, and off we went into the five-minute electronica journey. In space, no one can hear you untz untz. Zero Gravity Band is changing that.