The Balinese Cremation Ceremony: A Must-see When You Visit This Island 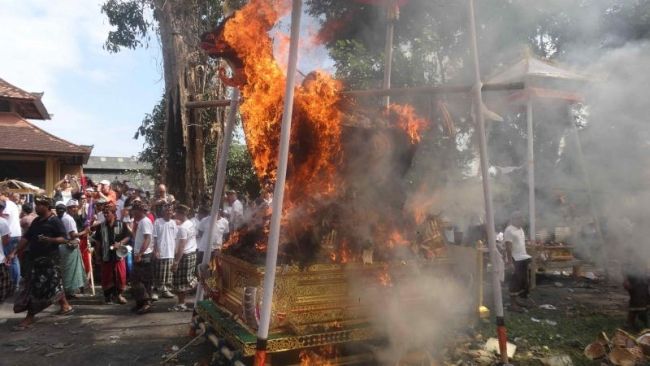 In search of the perfect Balinese celebration, my guide Made Jiwa and I found a commoner cremation ceremony (say that 10 times fast) in a village 30 minutes south of Ubud. 100 people were all to be cremated at the same time. With about 2000 village people and 4 tourists, it was easy to get up close and personal with the ceremonies and the kids. This cute boy looks like he got his nose a little close to one of the burning bulls. 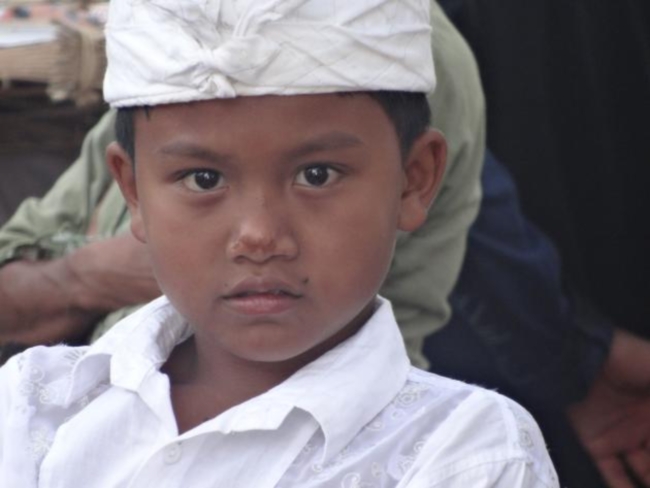 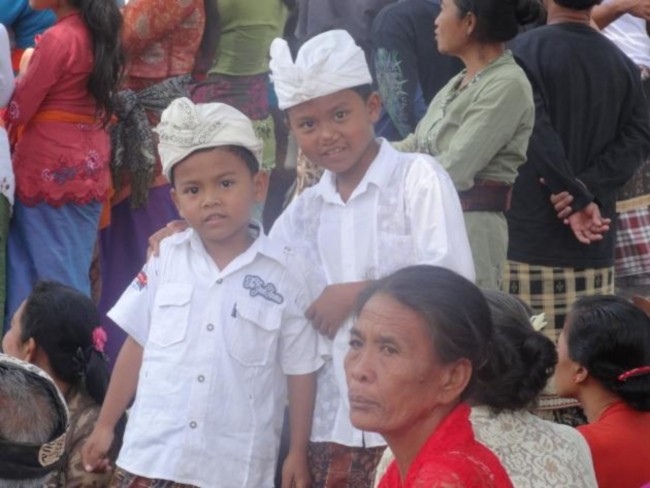 All of the preparations lead to the spectacle of the bull being fired up. The bull acts as a sarcophagus for the body (or, more typically, the bones since the person has been buried for awhile). Families stuff heirlooms, freshly-cut women’s hair, and favorite foods in the bull before it gets lit up. For this particular cremation ceremony, there were 10 bulls lit on fire about the same time. No tears from family as this means that their beloved is on their path to reincarnation. The ashes will be spread in the ocean or maybe on the sacred mountain and then about 12 days later there will be one more celebration to introduce the person who passed to all the deities and gods. 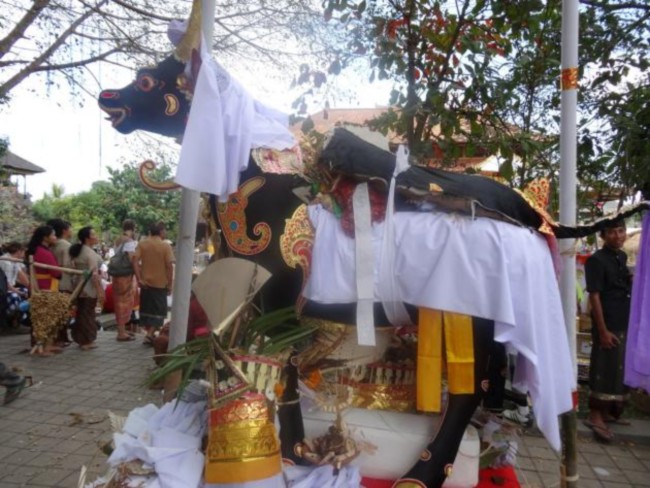 A priest does final prayers and sacred water dousing for this rare white bull (some villages prefer white rather than black bulls). 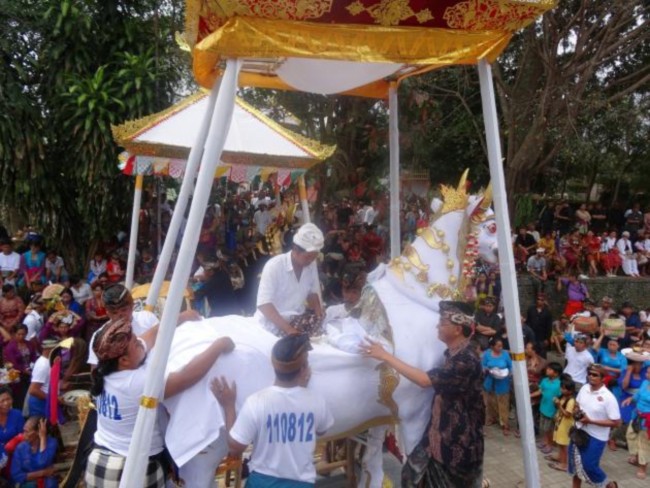 The cremation ceremonies also offer some culinary ornamentation. The towering art piece is made exclusively of pork skins while the other is made of flour. 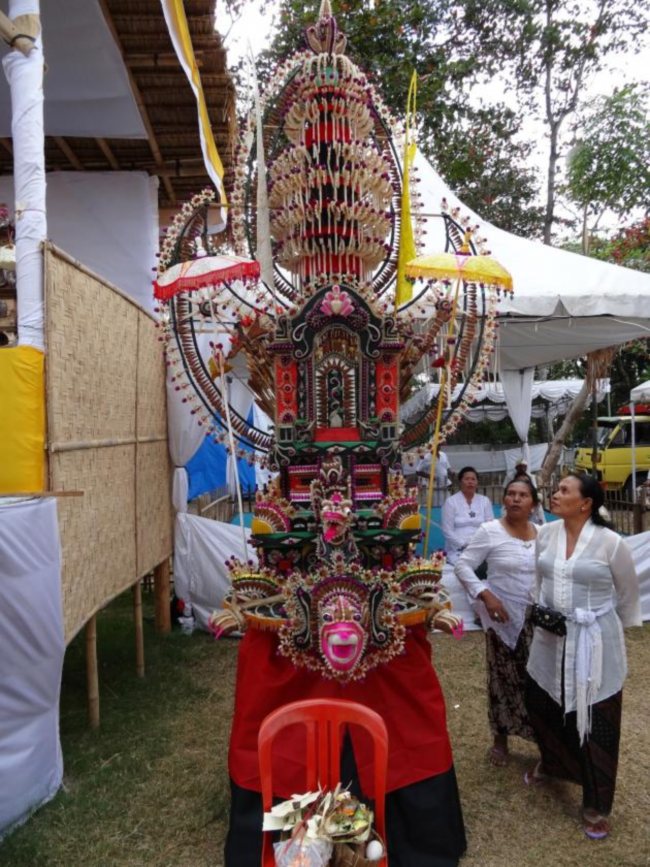 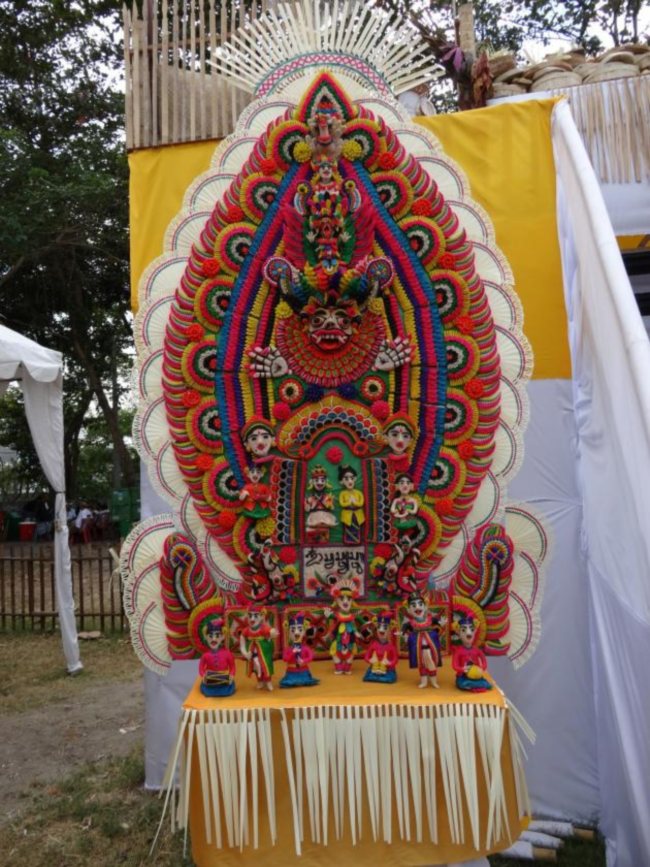 As the cremation procession begins, family members bring framed photos of those who’ve passed. Yesterday, I went to one cremation event that gave honor to 625 different people in the Denpasar area. That’s a lot of photos and a lot of fire. 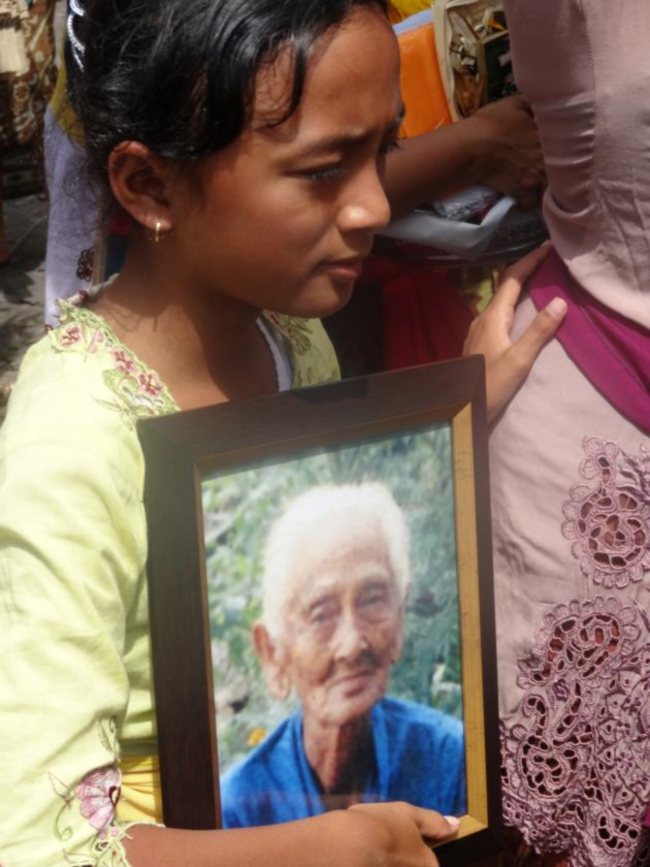 Many of those who are cremated stay buried in the cemetery for years before their family raises enough money to do the cremation ceremony. But, on rare occasion, a local villager passes away right before the cremation and the family chooses to have him or her join in the celebration which means that someone like this gentleman – who passed away a couple of days ago – is part of the ceremony although they put a gas-induced fire under his body to accelerate the burn. His family welcomed me to take photos and videos as they are excited about the fact his process of reincarnation is starting soon. 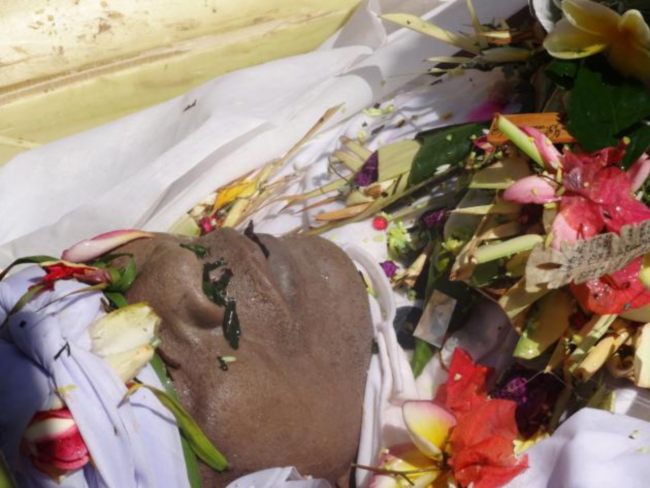 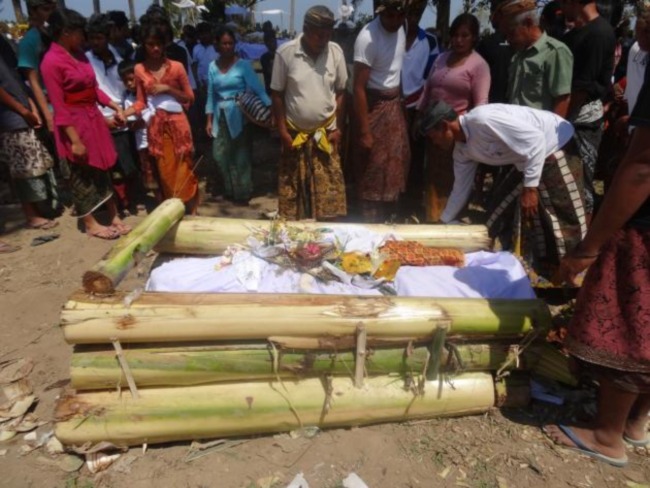 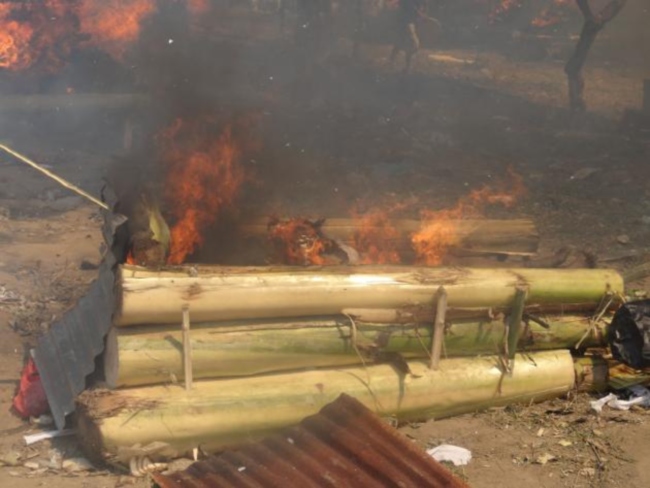 Here are some before and after shots. With 100 cremations happening simultaneously, it was piping hot. I got lots of soot and ash on me and had to take off my hat for fear it might catch on fire. What’s amazing is that there are all kinds of trees throughout the cemetery where the cremation occurs and none of them catch fire. 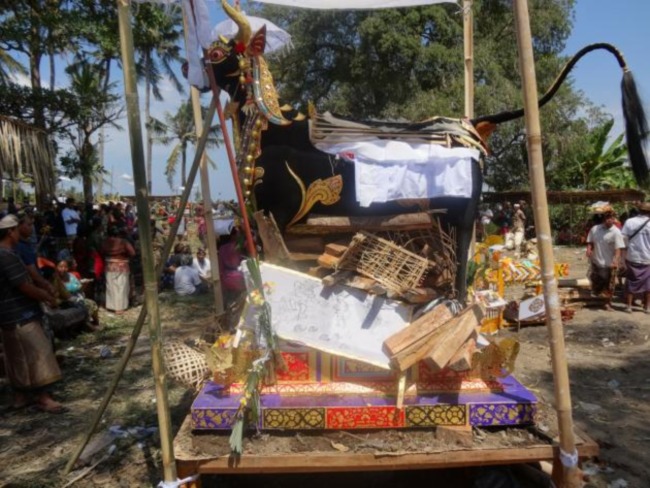 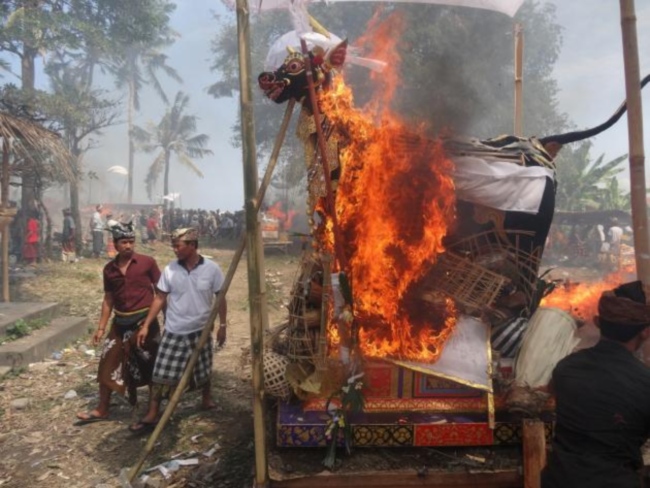 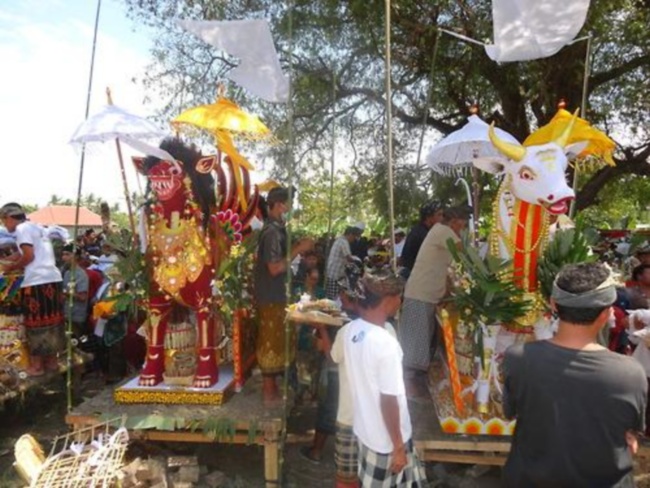 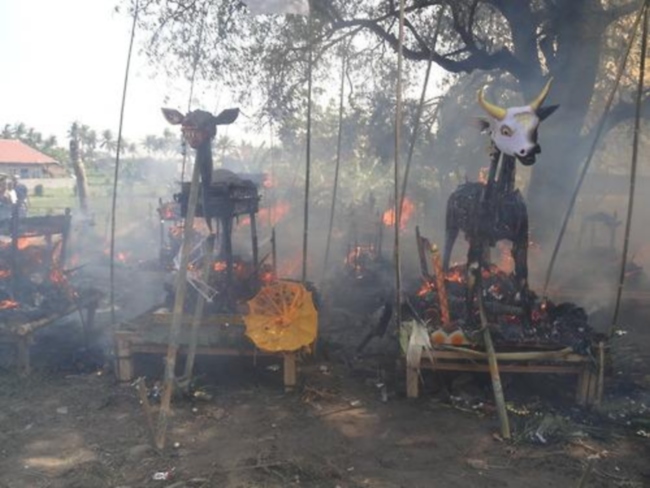