The Best Sound Camps at Middlelands

The inaugural Middlelands took place in Todd Mission, Texas, over the weekend at the gorgeous and expansive Texas Renaissance Festival Grounds. There’s no question that the party inside the festival gates went off each day and night. The three fully themed stages served the kind of mind-bending production Insomniac is famous for, and the artists all brought their A game. Over the course of three days festival-goers were treated to a diverse musical offering from artists like Kaskade, Crystal Castles, Andy C, Illenium, Major Lazer, Rich Chigga, Jurassic 5, and so many more.

As the performers spun their final notes each night, instead of making a beeline for their cars to beat the traffic, Middlelanders headed straight into the campgrounds where the party continued deep into the night courtesy of Middlelands' sound camps. While not a new idea in the slightest, the feature is new to Insomniac's festivals. And for this maiden voyage into the world of after-hours parties, 11 crews organized their own camps and spared no expense on production, sound and themes in order to make the sound camps an intimate multi-stage rager.

We made our rounds each night, and probably stayed up way later than we should have – but we checked out what every sound camp had to offer and put together this list to show you our favorites. 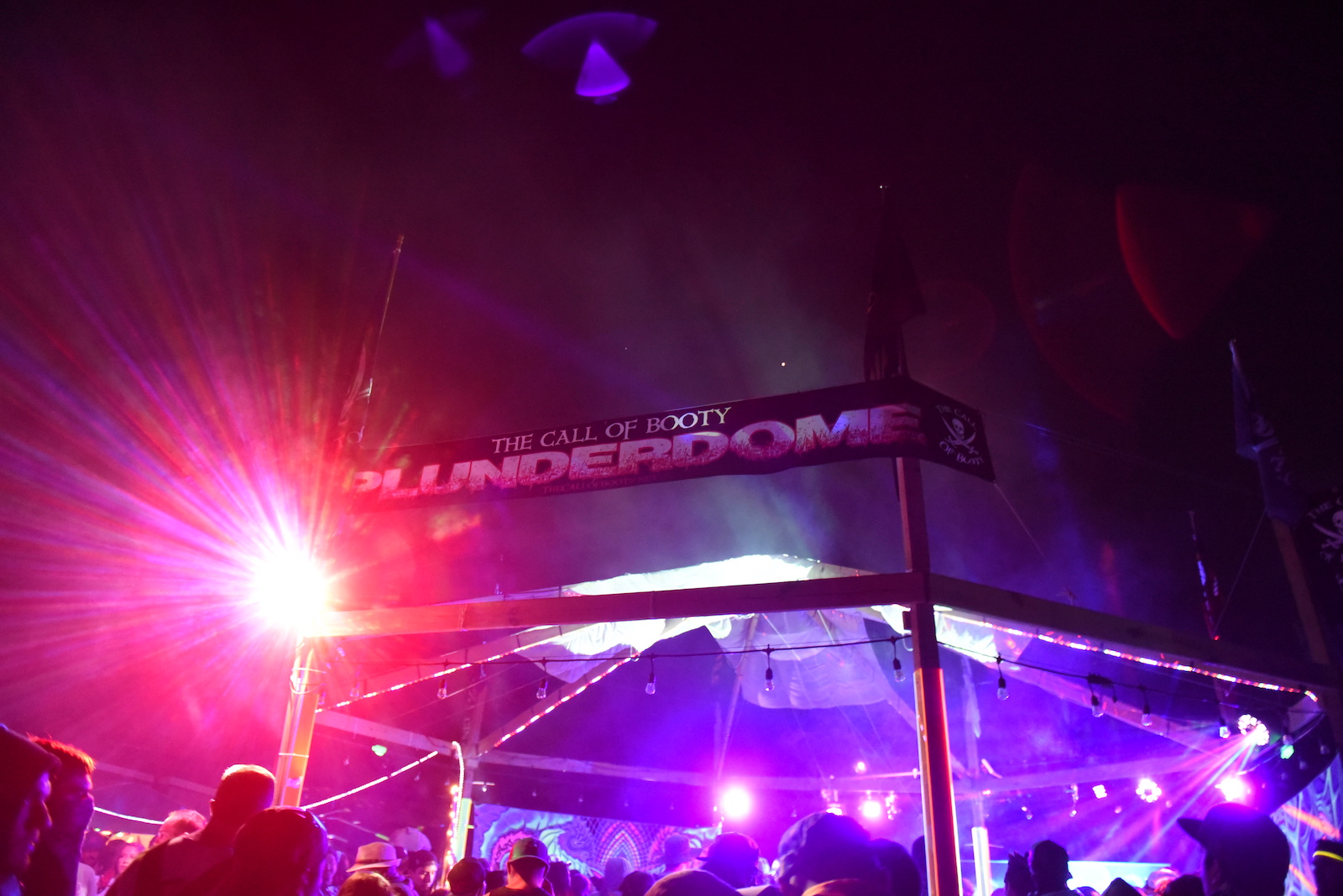 Easily one of the stars of the sound camp area was Planet Booty’s Plunderdome. Headed up by a group of Texas Renaissance Festival vets, their usual gig is entertaining and providing a place for campers to play games like “Pirate Planks,” a Ren Faire version of Jenga. Camp manager Steven Varet told me that the sound camp was personally requested by Insomniac founder and CEO Pasquale Rotella. “This past year in October, Insomniac was there scoping the place out," said Varet. "They ended up camping with us and invited us out and we said, “Screw it we’ll do it!”

I loved the off-the-cuff attitude he had toward making it all happen, and was surprised to learn that this was the first time they had even organized something with sound. Besides the wicked attention to detail in setting up an actual structure to house the dance floor, Planet Booty had a rockin’ sound system and 50 pirates roaming the grounds all weekend. Plus, with Insomniac’s help they were able to score a surprise set by none other than 12th Planet on Saturday night. 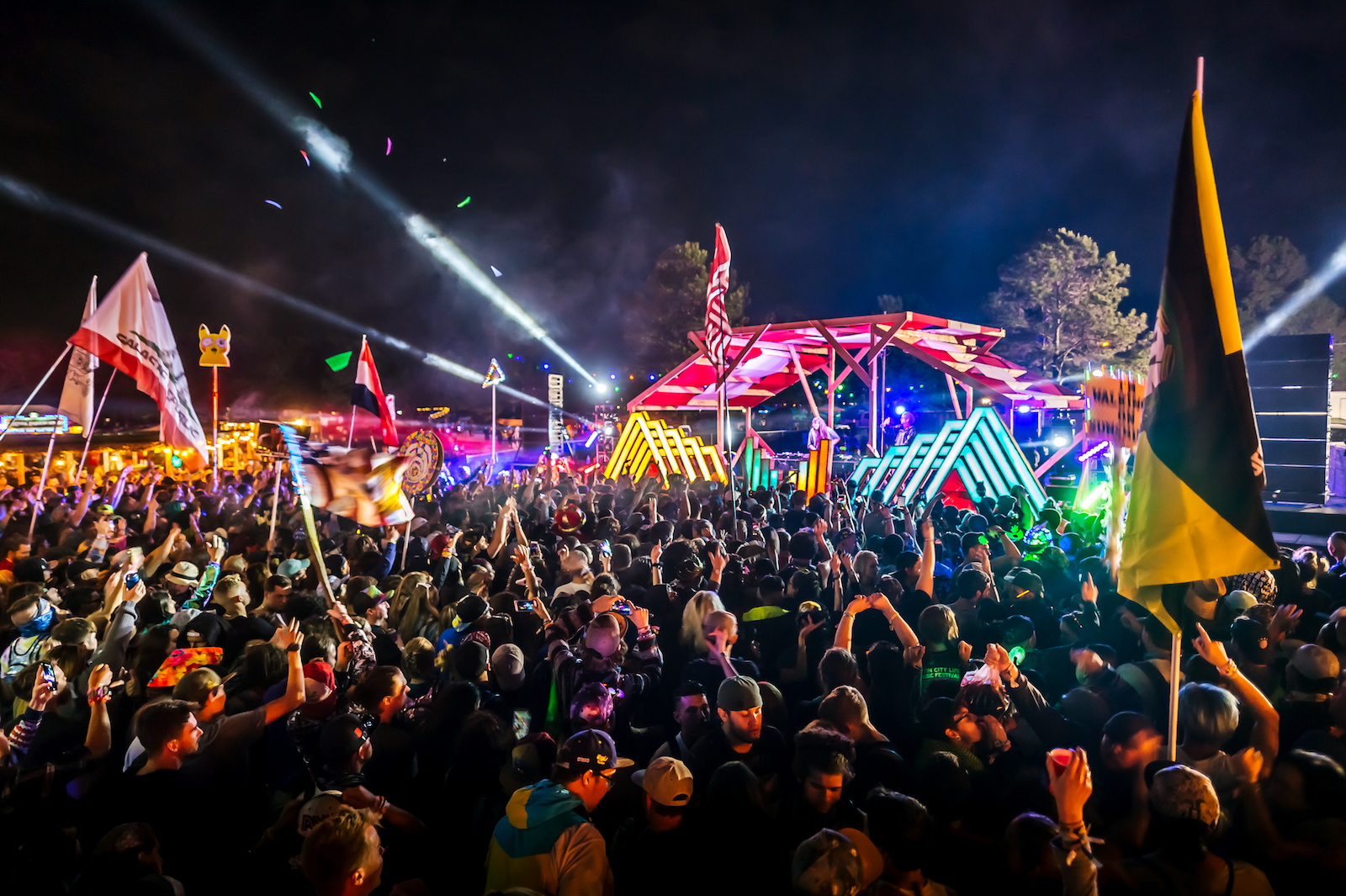 I couldn’t do this article without giving a shout out to the camp that anchored it all. The Insomniac Camp was the first thing you saw upon exiting the festival each night, and it was fueled a lineup of Middlelands artists that kept things going strong at this camp until 4 am each night.

Besides the stellar lineup of surprise b2b sets (my personal favorite was What So Not vs. Quix), you had the added benefit of being able to grab a snack from the food stands which stayed open to help feed all the hungry dancers who were still going strong after a full day at the festival. My decision to grab a plate of cheese fries topped with fresh jalapenos at 3 am on Saturday night was a fabulous idea, and sent me to bed with a warm and full tummy.

Holy Ship’s ShipFam showed up with likely the largest group of campers of any sound camp. The nearly 100 campers at House Pineapple kept the vibes thick all weekend long. They had a solid lineup of house and techno throughout and also received a visit from bass music badass 12th Planet early Saturday morning to play an impromptu bass house set. It was the kind of surprise sighting that kept the buzz rolling for the sound camps all weekend.

The level of organization it took to pull this camp off was intense, as they had nearly 100 people camping from as far away as Alaska. Not only did they coordinate and build out a beautiful and shady dance floor (which came in handy during the day as temperatures hit 80 degrees Fahrenheit), they also fed all their camp members. One of the trailers was the official Pineapple Kitchen, shelling out three meals a day for all the hungry campers.

Because the camp was made up of such a diverse group, it had an extra special spirit of friendship without borders. As camp leader Maya M. stated, “These music festivals are all we have to see each other.” When asked what the emotional reward was to putting a camp together when there was no financial incentive, she told me it's “the chance to be around so many friends, especially in a group camp where you know you’re not a lone wolf” was all the reward she needed. 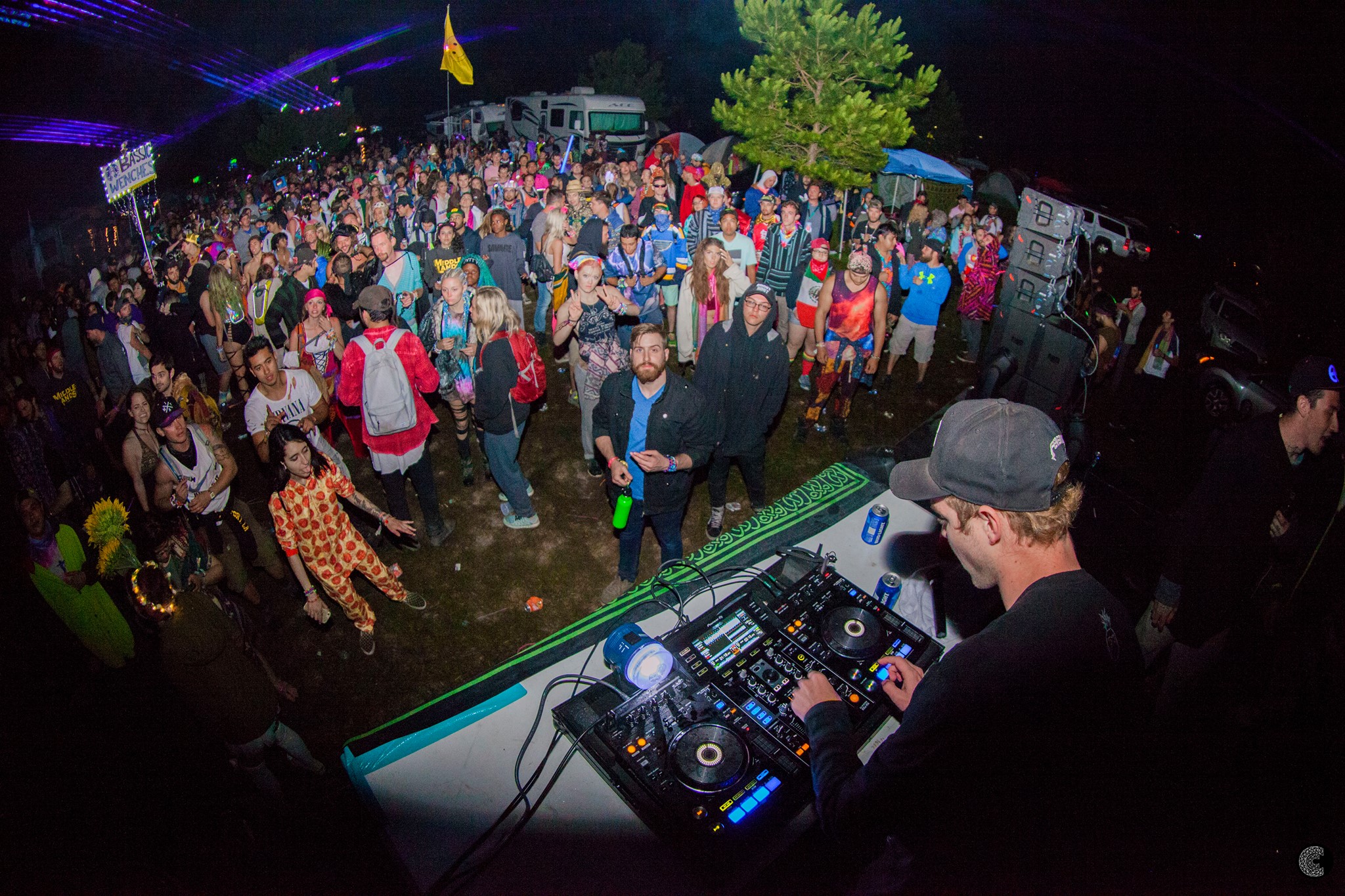 The award for most rave definitely goes to the group of Texas promoters who put together The Funk Nest. Decked out with an elevated stage, concert lighting, lasers and enough sound to rock the entire sound camp area on its own, it showed Middlelands exactly what the Texas scene is all about.

Their crowd was one the vibey-est and biggest of the entire weekend, with up to four hundred people regularly camping out to catch the heavy hitting bass music coming from the big stack of speakers. I caught Sunday night’s appearance by rising trap star Luca Lush and was thoroughly impressed at the experience on the dance floor.

The organizers here went all out to put together a nightly rave under the stars. They had their production trucked in from New Orleans, and their impressive lineup was made up of mostly local Texas DJs. 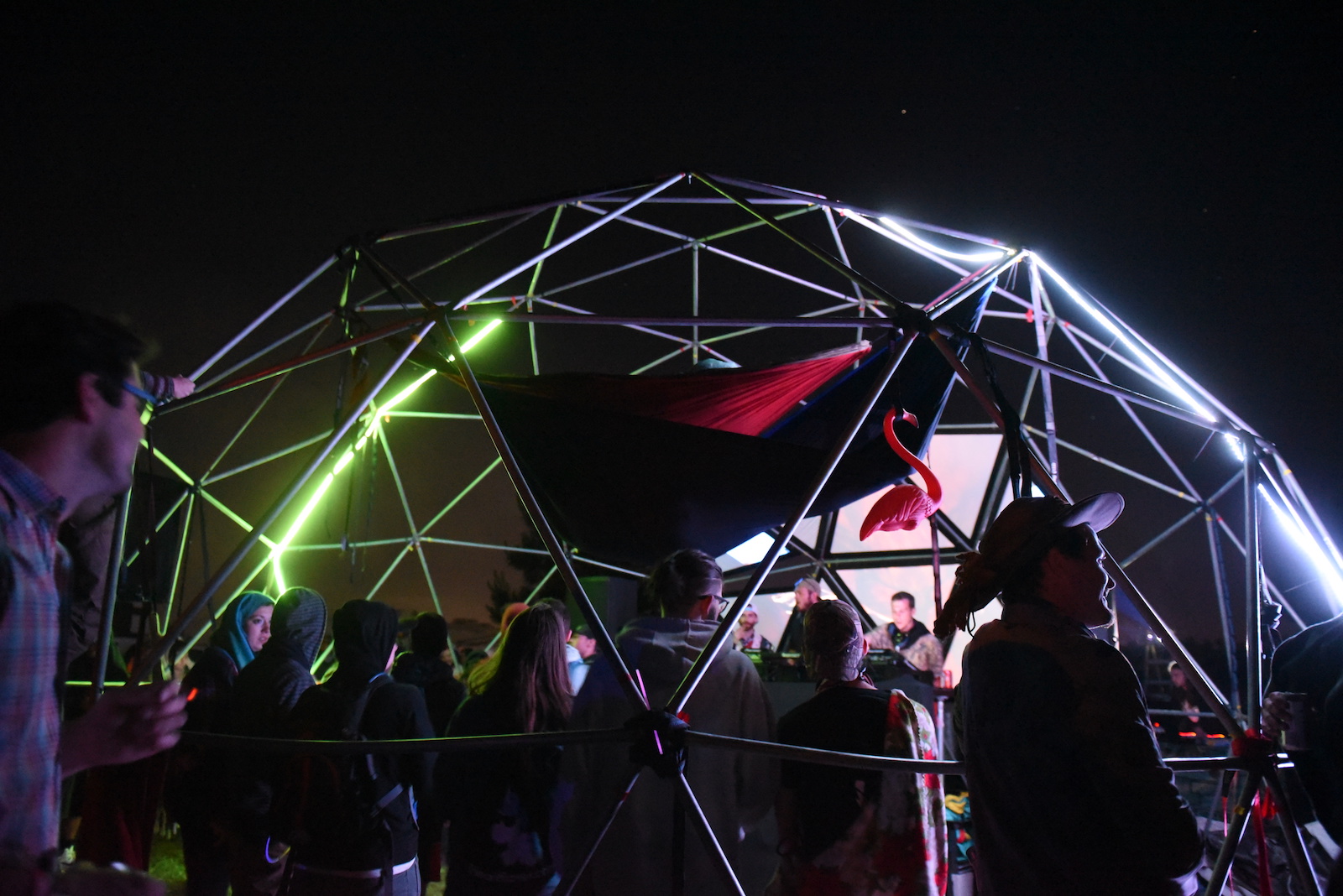 The guys at Ye Olde Dohm are festival regulars. They originally intended the geodesic dome that made up their Middlelands stage and dance floor as a home for camp members at Burning Man. You could actually find campers nested in the many hammocks that were tied to the inside of the dome during the day. But when they decided to give it a go as a sound space and realized the power of the dome, they decided to take it to every festival they could. These guys are straight up veterans.

They’re also quite crafty. The dome was built by hand and the visual screens that double as beautiful examples of the shaping of interior spaces were made from shower curtains. They had a diverse lineup throughout the weekend that on Friday night featured the only trance music at the festival all weekend.

The most striking thing I found when speaking to the guys who run the camp was their passion for what they do. Stephen Ridgeway, who helped conceptualize The Dome from its beginnings, had this to say: “The only thing that matters is that the people who are in dome are having a good time. And the people that are in dome are creating lifelong memories. I’ve seen it happen, where two people embrace in such a way that you know that moment will be forever ingrained upon them. To be able to provide the space for that to happen is all I need to continue doing this. I will work the rest of my life to fund this if I can continue to make this happen.”