The Ephemeral Nature of Beauty 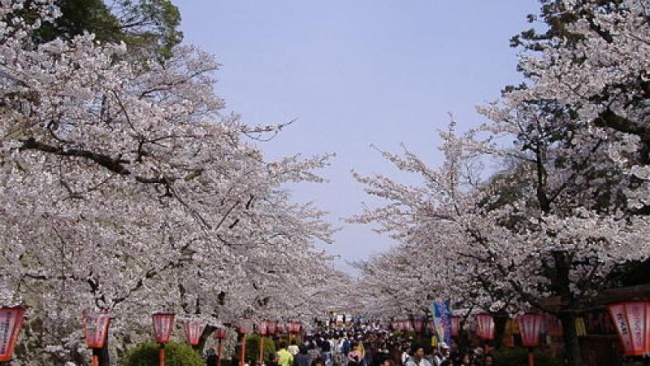 anami (“flower viewing”) as a cultural tradition goes back 1,300 years in Japan. Typically, Hanami refers to cherry blossoming viewing, but some use the word to refer to plum blossoms. The cherry tree, Sakura, is viewed as sacred even though it doesn’t produce any fruit, but it’s scent and beauty are at their apex as this island country comes out of its winter slumber.

I was fortunate enough to travel to Japan during prime blooming season in early April 2012 (the season tends to run from March till May, although Okinawa gets early blossoms in early February where 200,000 will gather in Nago). This is a sublime festival and one to do in combination with experiencing the variety of tranquil Japanese practices and customs, whether it’s viewing zen gardens in Kyoto, going to a Japanese communal bath in Tokyo, or early spring hiking in Nagano (where the Olympics were held).

Nearly every community of any size will have a Cherry Blossom Festival and many will do these events weekly during prime season. We happened upon a family-oriented day in the park with colorful bouquets of cherry blossoms in full glory in the trees. There were all kinds of games for kids, some taiko drumming for the adults, and lots of sake tasting, which is just what your body wants as there’s still a chilly nip in the air in early April.

The best spots include the following:

TOYKO: Ueno-koen has 1,000 flowering trees so provides a visually-arresting spectacle, but also tends to get very crowded. Less busy is Shinjuki-gyoen, one of the city’s largest parks.

KYOTO: If I had to pick a favorite spot, this would be it as the setting of tranquil and transcendent Kyoto is perfectly-suited for this ephemeral, natural custom. There’s a gigantic weeping cherry tree in Maruyama-koen. On the second Sunday in April, go to the Daigo-ji temple where there’s a special procession, in period costume, that’s been going on annually for more than 400 years.

YOSHINO: This is where the locals flock to as this mountain-top Kansai town creates an elevating floral carpet that’s probably the best photo spot for Hanami in the country. But, beware the village has narrow streets and on weekends during Hanami, it gets very crowded.