Ask The Festival Lawyer: 3 "Fest Law" Phrases You MUST Know

So, if I'm walking around a festival with a beer in hand and an officer stops me and asks for my ID, citing public intoxication as his cause, what should I say? Any key phrases I should remember? Thanks!

I get asked a lot about what to say or do in different scenarios with the police at music festivals. These are great questions to think about ahead of time. That’s because in most situations, the law requires you to say out loud you are objecting. Turns out Bob Marley was right. If you don’t, “Get up, Stand up” for your rights you lose them.

At the same time, an encounter with a police officer can be an intimidating and frightening experience. As Dune said, “Fear is the Mind Killer.” Knowing the correct legal phrase to say when you are scared is extremely difficult. It’s even more difficult if you are drunk or otherwise “not thinking clearly.” #youknowwhatimean

To help, I broke down the festival law you need to know into three easily remembered, “Fest Law Phrases.” I’ve even combined the three phrases into a handy “flow chart” for ease of use.

The 4th Amendment prohibits “unreasonable” searches and seizures by the police. In other words, an officer has to have a reason or justification for detaining or arresting you.

How much of a reason? Well, the law divides police encounters into three types. At each higher level of police encounter, the police officer has to show more justification as to why he stopped you.

The three levels of police encounters are as follows:

Consensual Encounter: A police encounter where you are not the subject of a police investigation. On the infographic, this box is marked in green because you are free to go. Officers don’t have to legally justify a consensual encounter because you can leave at any time.

Detention: A police encounter where you are temporarily being held while the police investigate you for a crime (example: an officer detaining you for a DUI investigation). Officers must have a “reasonable suspicion” that you were involved in criminal activity to detain you. On the infographic this box is marked in yellow because you aren’t free to go but you aren’t under arrest yet either.

Arrest: Just what it sounds like: you're on your way to jail. On the infographic this box is marked in red. An officer must have “probable cause” to believe you committed a crime in order to arrest you. (Important note: Officers only have to read you your Miranda rights when you are under arrest or its legal equivalent)

In all of these situations, it is a judge after the fact who decides later which of these three categories the police encounter fit into. For example, an officer might argue to a judge that you were only being detained and not actually arrested. Legally speaking police only have to give you Miranda Rights if you are arrested.

In that situation, the judge will look at all the surrounding circumstances and decide if the detention was just a detention ( Miranda rights need not be given) or the “functional equivalent” of an arrest (Miranda rights must be given by police). I call this the “legal cover band” doctrine. 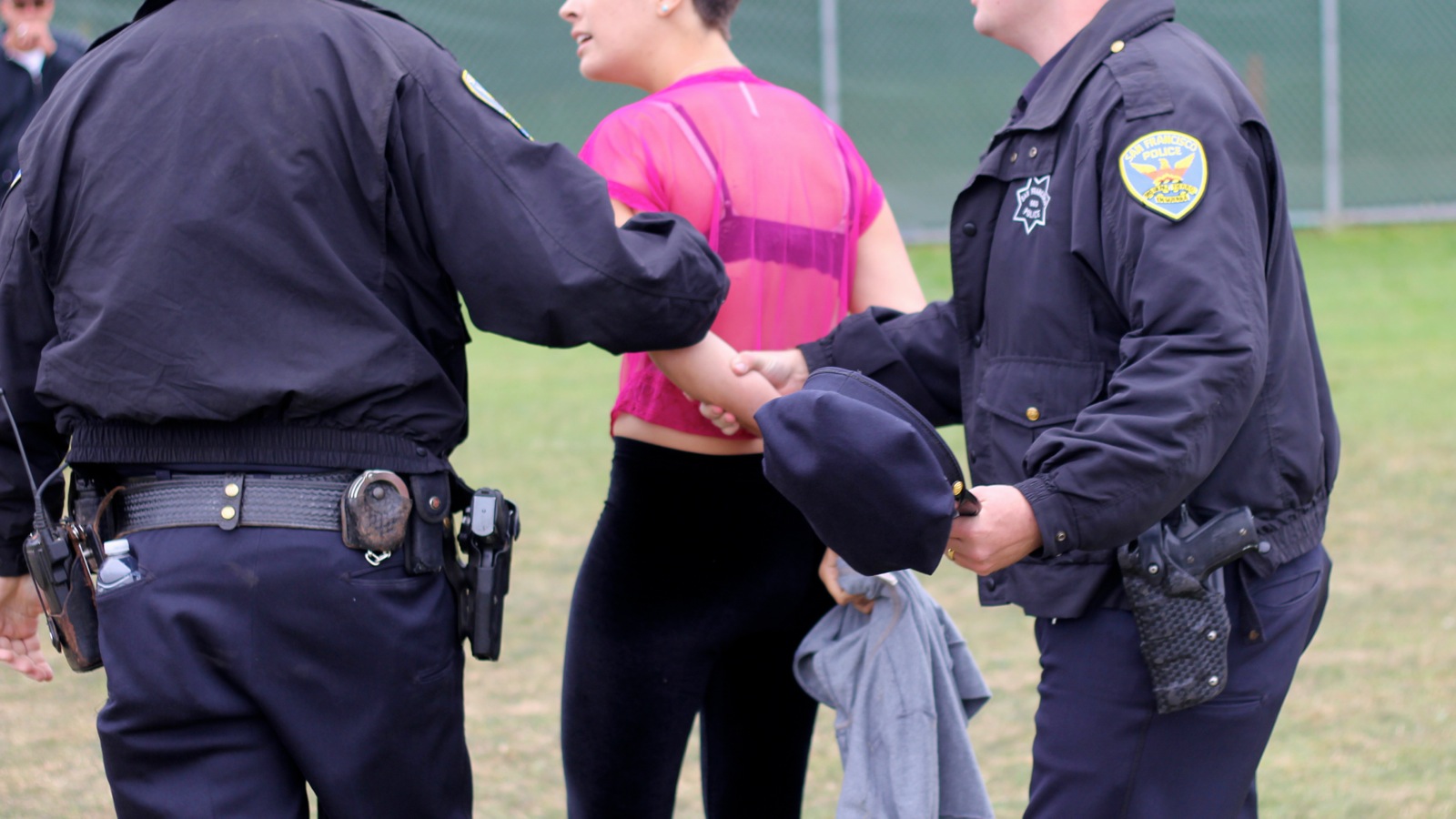 Remember the “Name Game” in Inglorious Basterds? Whenever you are speaking to a police officer, legally speaking it’s like having card on your forehead that says “FREE TO LEAVE,” “DETAINED” or “ARRESTED.”

Asking this question makes it clear that you are not there freely and are being “detained.” It also forces the officer to make an internal decision about whether or not there is a legal reason to detain you or whether to let you go. (remember that a police officer only has to give a legal basis for stopping you if you are being “detained.” If the court finds that it was a “Consensual Encounter” the officer doesn’t have to give any reason for his contact with you. )

But what if you keep asking, “Am I free to leave?” and the officer won’t answer. What then?

Remember when I was talking about the “legal cover band” doctrine? Well that doctrine also applies to detentions. In other words, if you continue to ask to leave but the officer doesn’t respond, a judge will determine if it was a “cover band” type of detention. By not answering, he is effectively detaining you.

Given the state of police/citizenry relations these days, I don’t think walking away from a cop is a great idea. That’s why the infographic says that you should only leave if you get an affirmative “YES” from the officer. Ultimately, however, YOU are always in the best position to decide how best to handle your particular police encounter.

2. I'm Not Giving You Consent to Search My Person of Property

If you ask the officer “Am I free to leave?” and are given any answer other than yes, you should assume you are are being investigated for a crime and act accordingly. That includes refusing any and all requests for searches. It’s important to practice this second “Fest Law” phrase and have it ready. Officers will sometimes just immediately launch into conducting a search to see if you will object.

Also, many times people have told me after the fact that they felt they were pressured into giving consent for a search. Be prepared. Expect to hear things like, “If you have nothing to hide, why can’t we search your stuff?” or other types of pressure from the officer.

Know this…If the police are asking you permission to search you or your property, it usually means two things:

1. They consider you a suspect
2. They know they are making an illegal search.

Therefore, never, under any circumstances give consent to randomly have you or your property searched.

Cops will say that a person invoking their 5th Amendment right to remain silent and their 6th Amendment right to counsel in this way means they're “lawyered up.” In addition to sounding cool, there is a really good legal reason for memorizing and using this Third “Fest Law” phrase. As I mentioned above, the police only have to read you your Miranda rights if you are under arrest (or a “cover band” equivalent of arrest). The police can legally question you without Miranda rights in a detention.

As soon as you establish that you are under a detention or arrest, calmly and clearly assert “Fest Law” Phrase Three. Study this video for inspiration:

Well, there you have it. These three “Fest Law” phrases clearly invoke your rights in a non-argumentative, respectful way. Hopefully you will never be in the position to have to use these. But if you are, these phrases give you something to say to an officer that is legally powerful but isn’t argumentative.

Disclaimer - Although the Festival Lawyer is a lawyer he is not YOUR lawyer. The ATFL column gives general information about legal topics, NOT legal advice. The law is complex, varies a great deal from state to state, and each factual situation is different. Also, “The Festival Lawyer” is a fictional character. Think of the Festival Lawyer more like a legal spirit guide, encouraging you to educate and inform yourself.