The Importance of Being Earnestly Costumed

There’s a photo of me floating around out there that virtually guarantees that I can never run for public office (outside of San Francisco of course). In it I’m clearly intoxicated, wearing Mickey Mouse ears and a pink leotard. One of my eyes is going the wrong way while the other has that red Terminator thing going on, and I’m holding a large bottle of Puerto Rican scotch called Black Cock.* Yes, Black Cock.

Included in my cohort that night was a 1940s mobster, a flight attendant, Holly Golightly, and Jesus. It was Halloween 2008, and like people all over the country, we’d been waiting all year for the chance to put on costumes, drink unfortunate amounts of alcohol, behave irresponsibly, and laugh giddily at the wonderful getups we saw people vamping in on the streets. For a night, we got to be someone other than ourselves, even if that person had absolutely no affiliation with the costumes we were wearing.

And in a way, that’s what makes the act of wearing a costume so magical. The costume is transformative. It can be spiritual or playful, sexy or sedate. In San Francisco we revel in the chance to dress up. Seeing as each year there’s some new event added to the calendar for which we’re expected to don a disguise and dance in the streets, most San Franciscans have a costume box in his or her domicile. It’s part of our culture. We use costumes as a way to express the parts of ourselves that don’t normally get to sing.

Getting dressed up in silly outfits and merrymaking through the city is obviously not just a Bay Area thing; people don celebratory garb in every pocket of the world and have been doing so since the first time mankind had enough extra material to make more than just one loincloth. From ancient shamanistic rituals, where holy men and women would wear sacred outfits while communing with the gods, to the modern day bacchanalia of Mardi Gras and Carnival, costumery is an intrinsic part of giving oneself to the celebration. It’s about being part of something bigger, a collective tremor that vibrates until the lines between reality and make-believe become momentarily blurred. Suddenly you’re part of something bigger than yourself; whether dancing for deities, scaring away spirits, or just joining the crowd, the act of actually participating makes it so that anything seems possible.

Think about the last time you dressed up, whether it was for a costume party, Halloween, Burning Man, Dia de los Muertos, or even your prom. Now remember the feeling you had while getting ready: the excitement, the nervousness, the anticipation of what the evening may hold for you, and the joy of recounting previous nights where you put your grown-up self to bed early and let your kid self stay out all night long. This is all part of the transformation, part of the letting go. You’re beginning to build towards being some strange creature that looks and sounds like you, but is actually someone completely different. Tonight you will be Cleopatra, or Oscar the Grouch, or some odd amalgamation of the random items you found in your closet. Tonight you will be a sexy nurse, or a fireman, or some beautifully plumed demigod who dances with others in choreographed routines through the streets of Rio. Tonight you will be you, but not you, but completely you, and no one can say a damn thing about it.

Wearing a costume is all about saying “yes”, even if there wasn’t a question asked.

Costumery is an intrinsic part of giving oneself to the celebration. It’s about being part of something bigger, a collective tremor that vibrates until the lines between reality and make-believe become momentarily blurred.

And then it’s over. You danced and sweated and hugged. You ate and laughed and met new friends. You fell in love with someone dressed as Little Red Riding Hood as she passed through the other side of the crowd, even though you never got a chance to talk to her. You met a man dressed as some green sparkly thing and you went home with him, even with the sad knowledge that tomorrow, when you wake up, he will once again just be a man. Even when the fervor and fever and feel good all dies down, and you take off your make-up and outfit and get into bed, you’re still in costume. It’s not until you wake up the next day and smile, thinking about at all the inexplicable magic that happened the night before, that you’re back to being regular you. Unfortunately, when you’re doing that long, walk-of-shame trudge home, you’re back to being regular you too, even if you’re still all dressed up.

*Puerto Rico is known for many things, but scotch is definitely not one of them. 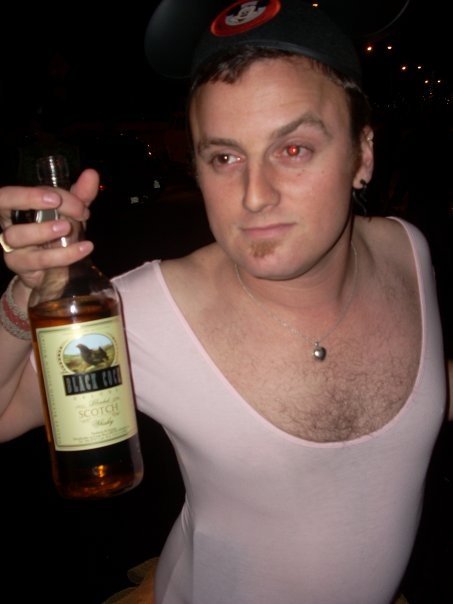 Stuart is the author of the Broke-Ass Stuart travel guide series and was the co-creator and host of the IFC show "Young, Broke & Beautiful." Follow him on BrokeAssStuart.com, Twitter and Facebook.