Mulberry Mountain in Ozark, Arkansas, has long held a special place in festival-goers' hearts. For 12 years, Wakarusa was held atop this magical peak and was beloved as the one of the only festivals in the conservative Southern region steeped in the unpretentious, inclusive, positive vibes and always-progressive lineups that were pioneered at festivals on the coasts. When it was abruptly canceled in 2016 due to the financial hardships of its producers, Pipeline Productions, thousands of festies were left with gaping, Wakarusa-sized holes in their hearts.

This year, there's a fresh chance for festies to return home to Mulberry Mountain. Backwoods Music & Camping Festival announced – with a hat tip to Wakarusa's legacy – that it would move to Mulberry Mountain in 2018. Previously held at Tatanka Ranch in rural Oklahoma, Backwoods boasted similar vibes to Wakarusa – which are still rare in the region to this day – and its star rose quickly thanks to its copious amounts of art to explore, its bespoke stages and fun lineups, swimming hole, and helicopter rides for catching aerial views. There was always enough room to dance and connect with new friends. It became so buzzed about, it was voted onto our list of the 300 best festivals in the world. Once it outgrew Tatanka Ranch, Backwoods notified its fans it was going on hiatus, promising a return rife with sparkling improvements; this, of course, often turns into potential death knell for many festivals – just as it did with Wakarusa, which had initially planned to resurface after one year off. So when Backwoods came through on its promise and dazzled its fans with the declaration of its new Mulberry Mountain locale.

The magic of Wakarusa laid the groundwork for the kind of collective effervescence Backwoods is ready to reignite across  Mulberry Mountain's 650 sprawling acres, where Backwoods can truly spread its wings. Before we dive into how things will be both bigger and better at Backwoods 2018, get a taste of the vibes Backwoods Music & Camping Festival will bring to Mulberry Mountain below:

Let's start with the lineup. With additional space and stages, Backwoods snagged one of its highest profile lineups ever for 2018, with STS9, GRiZ, dubstep champ Snails, and The Floozies headlining, with plenty of solid support from Papadosio, Emancipator, Yheti, Space Jesus, Sunsquabi, and more. 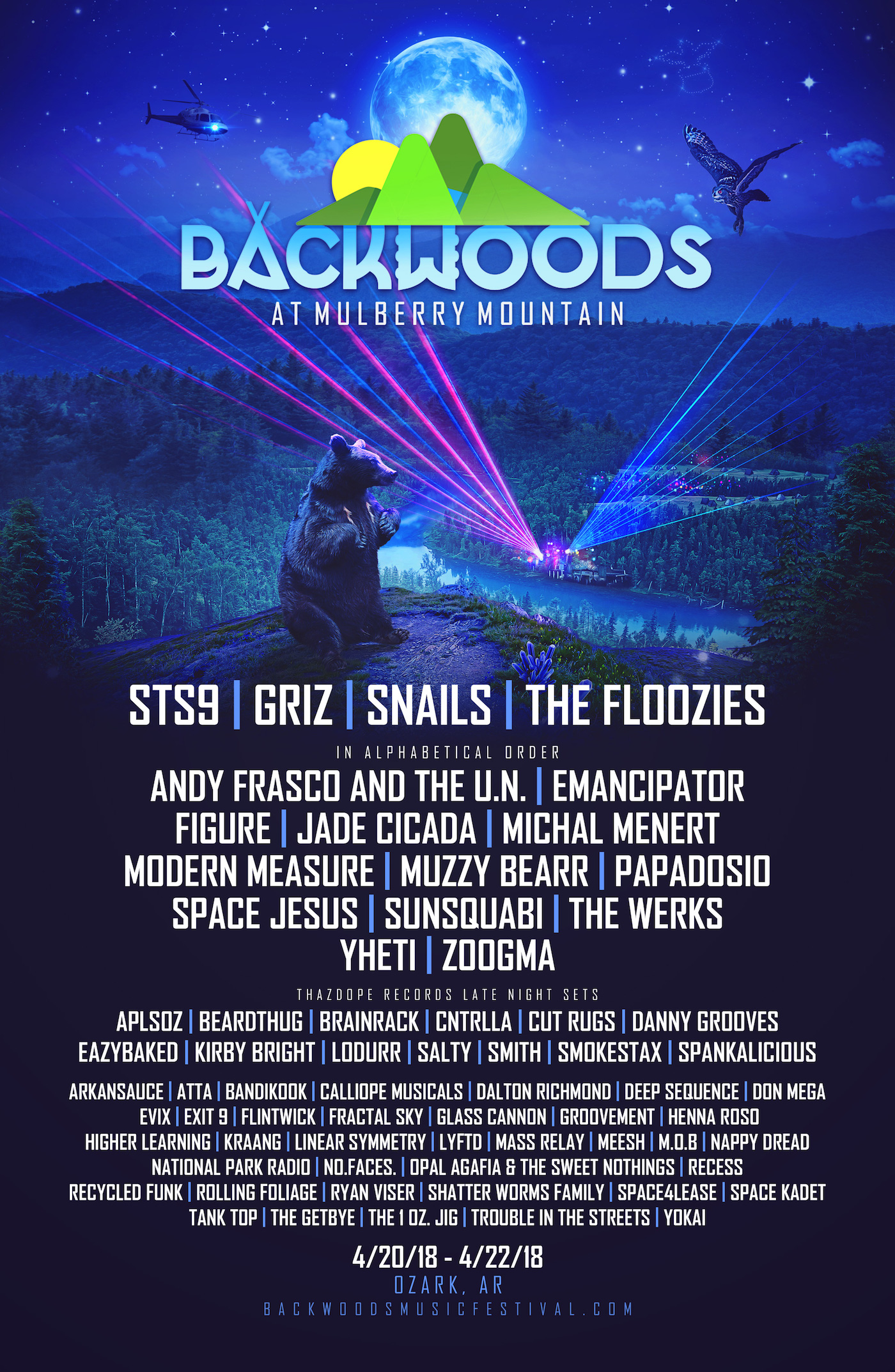 Attendees will be able to enjoy all of these artists on the all-new, intricate Space Station stage which pays homage to Wakarusa’s old Satellite Stage. According to Will Royall, Backwoods' Executive Producer, it will feature a projection visual mapped pyramid with satellite dishes attached to it. They'll also add effects and art pieces above the skies to add to the “outer space feel” surrounding the audience. To enter the area, attendees will have to go through a Black Hole portal. The newly expanded Globe Theater will also make its debut appearance at Backwoods, and will feature a new bar and the “Backwoods Stage” at Mulberry Mountain. The stage is perfect for the Globe, because it’s made from organic, raw, reclaimed wood – just like the existing main stage from those Wakarusa days, which is made from materials such as wood, stone, and rusted metal. There will be a new design for this year’s Motherland which pays homage to Backwoods' roots.

Camping will be more centralized – literally in the middle of all the stages, with two main streets where all the vendors will be. It'll be a happening spot for 24 hours a day, right in the festival's center. As long as there is not a burn ban, they'll bring back the Community Spiritual Fire near the end of one of the main streets, which is another spot festies have always loved for late-night hangs.

"Don’t miss the helicopter rides," says Will Royall. "They are only $40 and will show you the entire Ozark National Forest and festival from the air. We leave from the top of the mountain regularly. It’s not to be missed."

Backwoods is going bigger and harder than ever this year. Thanks to its commitment to honoring all the good times had at Wakarusa and to furthering its own legacy, the magic is alive at Mulberry Mountain once again.

Get 50% off Early Bird GA + Primitive Car Camping, only with Everfest Premium.

This article was produced in collaboration between Everfest's editors and Backwoods Music & Camping Festival.